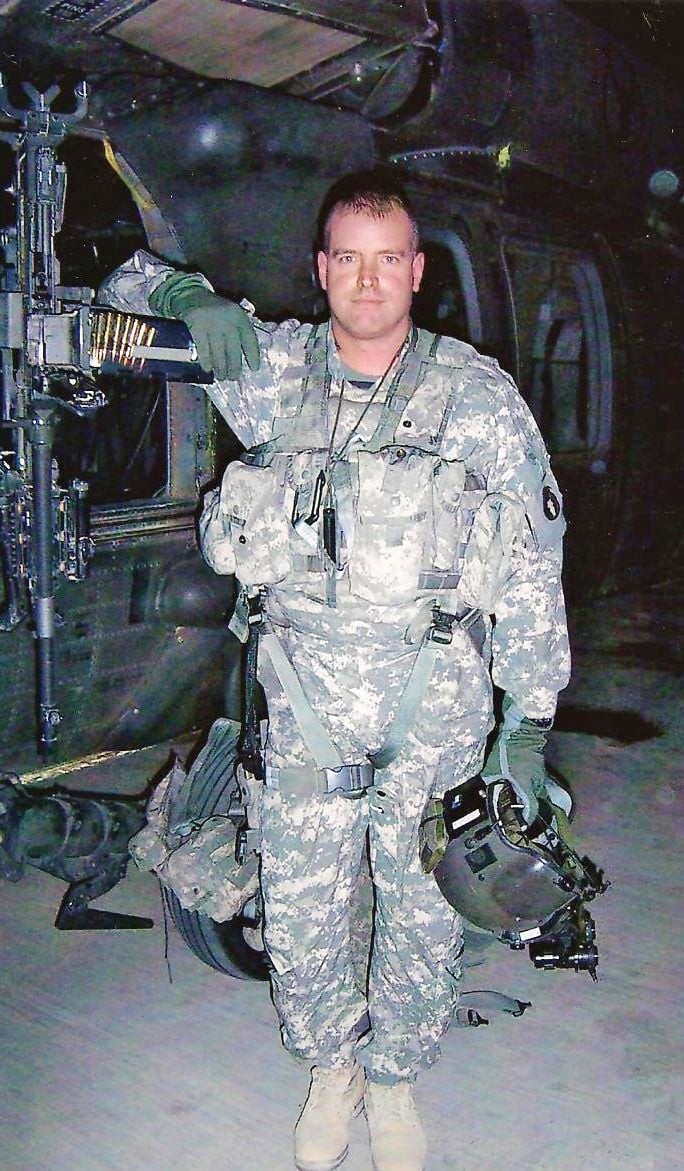 Brian Kokesh, husband to Kaija Reinhardt Kokesh, and father to Broc, Kassie, Wyatt and Kate passed away from a major stroke. Born in Montreal, Quebec, Canada, in 1969, his family moved to Garrison in 1984.

Kokesh was an all-around athlete who had a dream of becoming a pilot. In 1988, in his senior year at Aitkin High School, he left and entered the U.S. Army. He trained at a flight school in Ft. Rucker, Ala., for one year, graduating from the flight school in September 1993.

Kaija and Brian had two children while Brian served in Korea, and then in California and Alaska.

While serving in the Reserves, he flew for what is the only helicopter unit in the states located in St. Paul. All the while he looked for flying jobs, he said. For two years, he worked for Brainerd Helicopter fighting forest fires, filming commercials and “building hours to get better jobs,” Kokesh said.

From Jan. 2003-January 2017, he flew a helicopter for North Memorial Air Care out of Brainerd.

Kokesh’s life was interrupted when he was deployed to Iraq from 2007-08. After fives months of training at Ft. Polk, La., he was sent to Balad Air Base in Iraq where he participated in air assaults.

“I reached 20 years of service in 2009 and I retired,” said Kokesh. He retired as a Chief Warrant Officer II from the United States Army.

While he retired from military service mostly unscathed, an incident in January 2017 changed his life, and the lives of his family,  forever.

On a beautiful, clear evening in Palisade, Brian went for a snowmobile ride, got stuck in a water-filled ditch.  If not for a miraculous encounter with another local man who was travelling to the gym in the early hours of the morning, Kokesh would have certainly lost his life.

Kokesh spent most of the year in hospitals and nursing and rehabilitation ceters, and lost parts of all four limbs. He credited the prayers of the community and the dedication of his family for his survival.

“Without community support and prayers, I wouldn’t be where I am today,” Kokesh said in 2018.

As he helped his daughter Kassie and the extended family prepare for Kassie’s wedding this year, Brian fell ill and was taken to the hospital in Duluth by North Ambulance helicopter.

Doctors found so many clots in his brain that they were amazed he had been functioning up to that point.

Brian and Kaija’s eldest son Broc flew home from Chicago, where he is completing his PhD work. Broc and the rest of the family gathered to support Brian and each other.

Only a few days later, Brian passed away.

In his recent obituary, Brian’s family tried to summarize a rich and full life that almost defies summarizing.

‘He endured a long recovery and beating all odds, was walking with the use of prosthetics and living independently. He adored children’s reactions to his disability and talked with many young groups and classrooms about what he had experienced and demonstrated his prosthetics. He played volleyball and wake boarded following his accident, drove a car well, and continued to tinker and fix everything. His most recent project was adapting a throttle on his snowmobile so he could ride it this winter. During his young adult life Brian served a short time on the Palisade Volunteer Fire Department, coached youth hockey, coached JO volleyball, attended every single game/match/meet/concert of his four children. He enjoyed boating, skiing, snowmobiling, playing volleyball, golfing, camping, cooking/grilling, his golden retrievers, cats and (believe it or not!) goats, hunting, playing poker at the shack, tearing apart and fixing things at home, watching football and hockey, flying for North Memorial Air Care, and being with friends and family.’

Brian’s parents-in-law greatly valued his contributions to their family business; he was a talented computer and networking technician and a great asset to the business in many other ways as well.