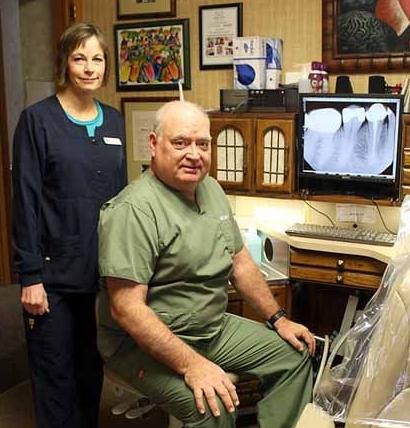 He has been assisted by Julie Anderson for a number of years. 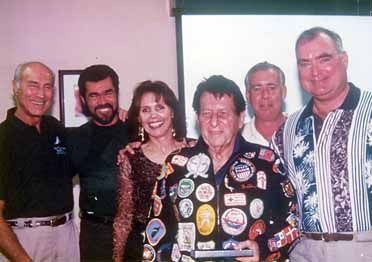 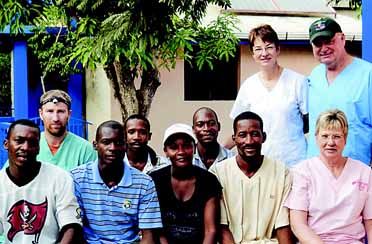 The other dentist, back row left, is Dr. Kelly Maixner from Alaska, who runs the Iditarod. The dental assistant, first row right, is Deb Brady from Deerwood. Terry and Bill Stein are standing back right. 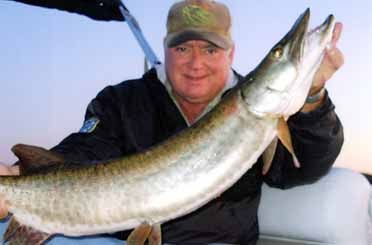 He has been assisted by Julie Anderson for a number of years.

The other dentist, back row left, is Dr. Kelly Maixner from Alaska, who runs the Iditarod. The dental assistant, first row right, is Deb Brady from Deerwood. Terry and Bill Stein are standing back right.

He’s a dentist, a scuba diver, a writer and a church deacon. On Dec. 31, Dr. Bill Stein will retire from one of those occupations.

Since he began his dental practice in Aitkin in 1973, he said he’s performed at least 7,000 root canals and more tooth extractions than he can count. And that’s enough, he said.

His practice was solo until 2007, when he was joined part-time by Dr. Sean Fleming, who was also practicing in Pillager. In 2013, Stein sold the practice to Fleming. Stein continued to work, with the last two years being half-time.

He listed his best and least-liked parts of the work: Best was getting people out of pain and restoring smiles; and least: having to run a business with all the laws, taxes and everything that goes with it.

Most gratifying, Stein said, was finding cancer in patients early enough that it could be treated successfully.

Stein was born in New Ulm while his parents were passing through town. An itinerant construction boss, his father was taking the family to Isle, where he was building the Church of the Holy Cross for the Crosier fathers and brothers. From there they went to Hutchinson, Kan., where his dad built a Catholic hospital. His Dad’s last project was being in charge of building the late Metrodome.

The family settled in Mendota Heights where Bill grew up with siblings, Gretchen and Jon. Stein’s mother was a medical technologist who ran several laboratories in the St. Paul hospitals.

“It was natural that I was steered into the medical profession,” he said. “I always did well in biology, so-so in chemistry and I made money as a teaching assistant in ‘bone-head physics.’ As for calculus, the math type, count me out. As much as my mother wanted me to be an orthopedic surgeon, failing calculus freed me to be a dentist.”

During his senior year at The Academy, Stein met Terry Thome at a Halloween party she and her sister were throwing. Using the hand-eye coordination that got him into dental school, he carved her pumpkin, they fell in love and this year he carved her 49th Jack-o-Lantern.

After completing his schooling, Stein contemplated applying to a large group dental practice where Terry was working as a dental assistant. One of his professors and mentors had a better idea. Dr. Bob Jeronimus, a graduate of Aitkin High School, told Stein that Aitkin needed a dentist.

As they say, the rest is history.

The Steins moved to Aitkin, established the dental office and raised their two sons, Billy and Ben, at their home on Cedar Lake.

The weirdest event happened the first year he was in practice. Stein said a backwoods family came to his clinic with grandpa, who was about 100 years old and suffering a toothache.

“The family insisted I not give grandpa novocaine,” Stein said. “They thought they would save money, not knowing there was no extra charge for that.”

Also interesting early in his career, was Stein’s friendship with Dr. Eggers, who lived in the nursing home wing of the hospital across the street from the dental clinic.

“Doc regaled me with tales of his arrival in Aitkin in 1916,” Stein recalled. “He remembered stepping over drunk lumberjacks littering the stairs of the Willard Hotel as he attempted to reach his room. Doc told me he was a student at Northwestern Dental School when G.V. Black (“The Founding Father of Restorative Dentistry”) was dean. For a young pup like me that was like meeting someone who knew Lincoln! Doc surveyed my office and was enchanted by our nitrous oxide machine. He reminisced, ‘I used to give nitrous oxide, we didn’t give oxygen with it. The patients got pretty blue but they all came around.’”

In 1968, Stein dove into the sport of scuba diving. He said he was fortunate to be able to travel to some of the best dive sites in the world through his affiliation with the people of Medical Seminars of San Antonio.

“In 1990, I was asked to make a presentation on the many dental aspects affecting sport scuba divers,” Stein said.

His scientific paper, Diving and Dentistry, was the cover subject of Northwest Dentistry in 1991.

Along with scuba diving, Stein took up underwater photography and video and was advised by Stan Waterman, an Emmy Award winning underwater cinematographer who filmed such movies as The Deep and Blue Water, White Death. Stein began writing for Northwest Dentistry in 1985.

“I was able to assist and witness the transformation of Northwest Dentistry from a dreary black and white journal full of reprinted dental abstracts to the vibrant magazine it is today,” Stein said.

Due to his age and physical limitations, Stein, who has undergone surgery for spinal stenosis, will no longer travel on missions to Haiti, which he and Terry began doing in 1994.

Involved with the mission group called Project Haiti, the Steins helped start the first dental clinic in Pignon, Haiti. After a couple years going there, they started a dental clinic at a Catholic hospital in Milot, Haiti, through the group Haiti Outreach, which they did for several years.

“We treasure our experiences there and encourage all readers to find a mission for their lives,” he said.

Stein completed a six-year journey to become a permanent deacon in the Catholic Church, and was ordained Nov. 26, 2006. He joined two other deacons (Vern Anderson and Roger Marks) in the cluster of churches including St. James in Aitkin, Our Lady of Fatima in Garrison and Holy Family at Bulldog Lake in Hillman.

In retirement, he said he will have more time for his work as a deacon at St. James. That means more time to assist the father at Mass, to preach the Gospel once a month or so, visit the sick and officiate at wakes, weddings and baptisms.

Terry Stein had this to say: “Bill has given me a wonderful life with experiences that I never would have been able to have without him. For example, missionary dentistry in Haiti, scuba diving in the Caribbean and deacon studies that have enriched my faith tremendously. I thank God for giving him to me.”

“He’s not retiring from being a deacon,” said Fr. David Forsman of St. James Church in Aitkin.

Forsman said many don’t know that Stein heads the missionary co-op in the Diocese of Duluth. In that work, Stein connects with people from all over the world, getting them to speak at parishes in the Arrowhead Region. At St. James, Stein also leads a small group adult enrichment class, called “The Upper Room” along with other deacons and parishoners. And, as a deacon and dentist, he has performed missionary work in Haiti.

“I appreciate most his knowledge of the faith,” said Forsman, “and his ability to help me connect with who my parishioners are.”

“He is a great dentist and was a wonderful person to work for,” said Judy Patterson, who served as Stein’s office manager for 15 years. “That was the best job I ever had.”

Judy’s husband, Mike, credits Stein for a happy marriage. “My wife went to work every day with a smile. And when Momma’s happy, the whole family is happy,” he joked.

Bill and Mike have been friends for 35 years.

“When golfing together in the early years, we both were hitting balls in and out of the woods,” Mike said. “Now, he’s boring – his shots go straight down the fairway and I’m still in the woods.”

“He’s such a gentle guy,” Mike added. “He’s the type of person you would want in your foxhole. That is the ultimate compliment I can give anyone.”

“Reading Bill’s take on the comings, goings and opinions of the folks in and around Lard Lake always brought me a smile,” said Norlander. “I hope he will continue to write and delight Age readers for many years to come. If not, as he was a dentist, the Age should give him a plaque much as he cleared up mine!”

“Almost one year after graduating from dental school, I contacted Dr. Stein to see if he might be interested in hiring an associate,” said Dr. Sean Fleming, who earned his DDS from the U of M. (Fleming is married to Kristin, the daughter of Dr. Paul Severson of Deerwood. They have seven children, six beautiful girls and a precocious boy).

“I began working in Aitkin one day a week in March of 2009 which led to my purchase of the practice in 2013,” said Fleming. “Prior to coming to Aitkin, I was working in Pillager and Deerwood. My experience in Pillager was especially helpful in teaching me how to offer dental services in a hospital setting at Lakewood hospital in Staples. Since day one, Dr. Stein has been a man of few words in regard to offering advice but when asked, he always had pearls of wisdom that relied on experience and relationships.  Most of our conversations centered around politics, faith and some dentistry. Mostly, I will miss his calm demeanor and stories. Those two things were always welcomed amidst the new stresses of owning a practice and helped maintain a healthy perspective. His example of service to the area and foreign missions is also something I would like to duplicate/continue. To that point, we are in the process of building a new office and as early as next year we will be traveling to Haiti to offer dental services (the new practice will be located south of the current location on Hwy. 169).

“Looking ahead, I am excited for the coming years and I am very thankful for the foundation laid by Dr. Stein,” Fleming continued. “If ‘success’ is perceived for a given venture, credit is due to all who helped make it a reality.”

Along with spending more time with deacon duties, Stein wants to get in more muskie fishing. It would help with his editorial contributions to Muskie Magazine.

Stein agreed that he will continue to regale readers of the Age with tales of happenings at his fictional Lard Lake with all its unusual characters.

He and Terry would like to take a scuba diving trip annually; and he will continue to play golf with his cronies.