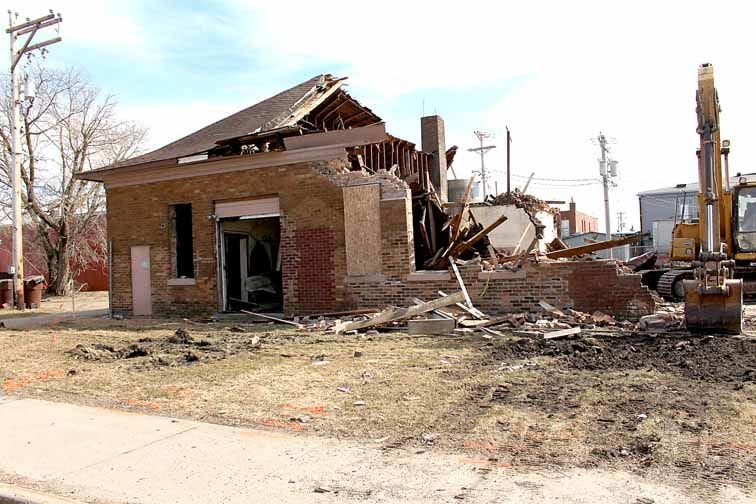 Demolition of the building located at 17 3rd St. NW, Aitkin, was performed by Nelson Lawn and Landscape in early April. It was home to the last operating creamery in Aitkin that closed in 1971. 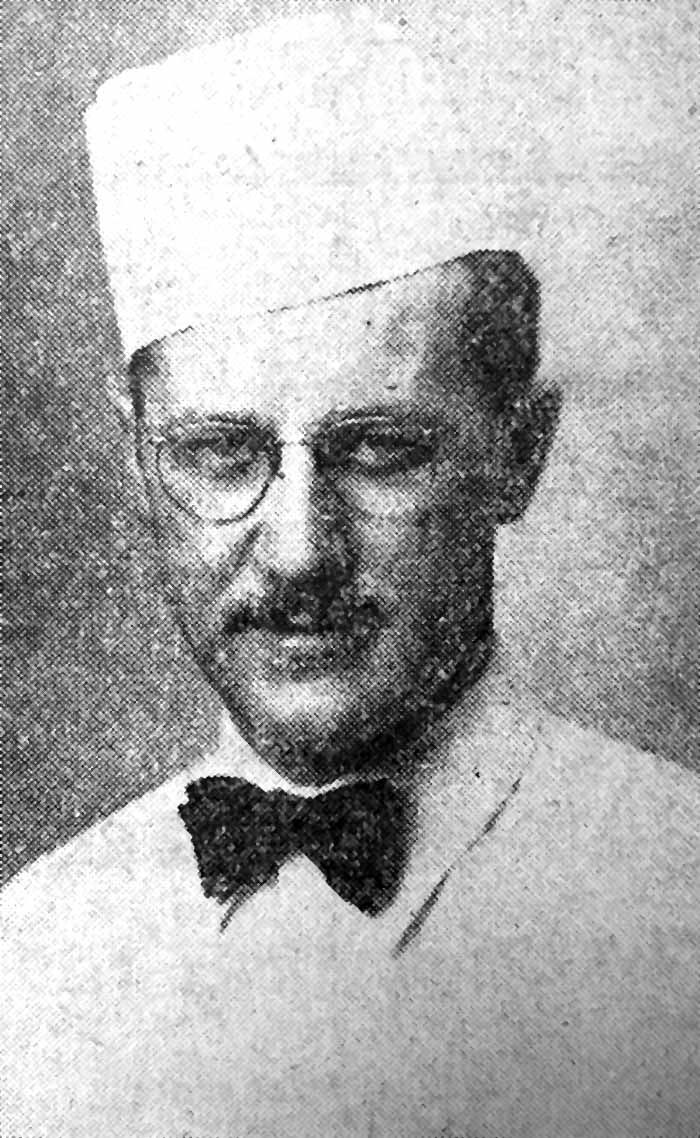 In April, 1979, Boyd Hakes retired after over 50 years in the dairy business.

As the demolition occurred, passers-by stopped to observe, capture pictures and collect a brick or two as a token of the past. Now, an empty lot is all that remains of the former home to the last operating creamery in Aitkin.

The property, located at 17 3rd St. NW, Aitkin, is currently owned by Keith Nentl. The demolition of the building was performed by Nelson Lawn and Landscape in early April. Nentl said there are no definite plans for the future of the site. Meanwhile, others reminisced on a time when the butter industry was a way of life.

AN ECONOMY REVOLVING UPON CREAM

Following the stock crash of 1929 came bank foreclosures and a huge loss in farm prices. Farmers found solace in Aitkin County because of the great quality of cheap land available through purchase, or their relatives’ ownerships.

Between the world wars (1918-1945), a system of self-sustained working of the farm arose, and large families were able to live off the land. There was a balance of self-sustained farming built around the five to 15 cows a farm typically had.

In the early 1940s, the economy in Aitkin County revolved upon butter. Creameries accepted good quality cream two times a week from Hill City, McGregor, Palisade and Aitkin. An estimated 1-2 million pounds of butter was manufactured in the county during that time.

The cream check paid for farmers’ groceries and gas. The separated skimmed milk fed pigs, young stock and chickens. This, plus large gardens, wild blueberries, cranberries and wild rice, and the abundance of grouse, deer and fish made the farms self-sustaining.

The Hakes family has a history in the cream industry (see the timeline). Herb E. Hakes, and his brother, Jay Hakes, entered the dairy business in the late 1890s. Herb’s sons, Hugh, Ken and Boyd followed in his footsteps; all eventually became creamery operators.

Boyd Hakes worked for over 50 years in the butter business before retiring from the Mutual Creamery in 1979. He died in 1990. Boyd’s daughter, Jennie Hakes, serves as president of the Aitkin County Historical Society. She still remembers how her father smelled when he came home from work wearing his white coveralls and paper hat. “Just like butter!” she said.

As a child, Jennie had a great time rolling down the can rollers outside the creamery building. It was operated by her father and both Jennie’s brothers worked there throughout high school. “I recall when I was very little Pa would pick me up and threaten to throw me in the big butter churn – all in fun, of course,” she said.

The creamery was the local source of pasteurized milk, cream and butter, serving many Aitkin townspeople and nearby summer resorts. It manufactured butter from cream and salt, in addition to a buttermilk by-product.

“I do remember the office area and buying milk for 45 cents a gallon,” Jennie said.  “My dad would bring home the buttermilk for the chickens –this was what was leftover after churning, and it used to be washed down the drain, so it could be had for free. It is not what they call buttermilk in the stores today.”

Also working with the Mutual Creamery for a number of years were Con Ecklund, Hugh and Kenneth Hakes, Axel Paulsen and Myron Kast. “The creamery really had three successive locations – the second in what is now called the Butler Building (which my dad eventually bought) and third, the building across the street,” Jennie added.

The operation had five divisions: receiving, pasteurizing, churning, printing and office. Receiving controlled the quality of raw materials, determining the grade of butter manufactured, with due care taken to ensure farmers were paid fairly for all the butterfat delivered.

Milk was brought to the creamery every day by the farmers and then they had a quick cup of coffee and a visit at Ziske’s next door. When the cream can entered the creamery, it was weighed, stirred,  sampled for a butterfat test and graded. Any cream unfit for human consumption  was marked with red dye and returned to the producer. The remaining cream was dumped into the receiving tank where each patron’s cream was pumped separately into the pasteurizers.

“My dad worked so hard and as a kid, I did not appreciate how tired he could get, and how strong he had to be. He dumped milk and cream cans and often his hands were burned with acid from cleaning the cans,” Jennie said, adding, “It was very sad to see that building that my dad kept so clean and organized go to ruin, and finally, torn down. I managed to retrieve three bricks when I saw they were starting the demolition.”

END OF AN ERA

Around the time Boyd graduated from high school, there was a creamery every 30 miles that pasteurized milk and made butter. “It was a good art and something I thought would go on forever,” Boyd wrote in a letter transcribed by Jennie following his retirement.

However, because of government subsidy of milk powder that started in WWII, the era was over when the creameries closed. When Boyd first came to the Aitkin area in 1940, there were over 1,000 area farmers milking cows. When he retired, there were fewer than 100.

“In driving through the countryside, you cannot help but notice the empty barns and silos that once made homes for farm families,” Boyd wrote. “I knew of 300 cream producers and the Co-op Creamery had 700. These farms have been replaced by service industries like cabins and tourism.”

• 1903: Jay had taken over the Bingham Lake Creamery and Herb joined him.

• 1926: The Mutual Creamery Company of Aitkin was founded by George Peterson. The original business site was the John Hanson Building, later occupied by Sergent Freight Service.

• 1929: Boyd Hakes got his start at age 12 wrapping “Eskimo Pies” by hand at his father’s creamery in Windom.

• 1931: Boyd’s brothers, Hugh and Kenneth, went into the creamery business.

• 1934: Ideal Creamery was taken over by Mutual Wholesale as a result of the depression. Hugh Hakes remained manager.

• 1937 or 1938: Mutual Creamery moved to the Hodgedon McDonald building. It was bought from Larson Bros. The entire building was remodeled by Murphy-Schroeder Contractors. The creamery was part of the Aitkin Trading Post, including the bottling and locker plants, and feed, grocery and clothing stores.

• 1937: Boyd went to work for Foremost Dairies in Columbus, Georgia. He was employed there as operations manager for three years before coming back to Aitkin to work with his brothers.

• 1940: In the fall, Boyd Hakes moved to Aitkin and took over as manager for Babe Kast. Boyd later became president of the Mutual Creamery when Hugh Hakes went to California.

• 1944: Mutual Wholesale went bankrupt. The creamery was taken over by the National Tea Co. of Minneapolis to secure a butter source for its stores. Boyd Hakes ran the creamery.

• 1948: National Tea Co. sold the creamery to Boyd Hakes on Jan. 1, who continued supplying National Brand butter. He purchased the business and equipment of the creamery, and the entire building (currently the Butler Building) occupied by the creamery, the National Food Store, its freezer locker plant and the second-floor Aitkin Furniture Co. Staff of the Mutual Creamery included Churn-man Joe Beiderman, Nancy Berry (office) and Bill Christensen (print room).

• 1967: Due to a changeover from cream marketing to whole milk caused by government milk subsidies, Mutual Creamery’s volume declined. It sold to the Co-op Creamery. Boyd Hakes became manager.

• 1968: Co-op Creamery expanded operations to Land O’ Lakes, which favored bulk tank pick up. Boyd Hakes sold the building to Vern Butler and stayed at the Creamery Co-op because of the elementary and home education cafeteria and farm shop addition.

• 1979: In April, Boyd Hakes retired after over 50 years in the dairy business. A celebration was held at the 40 Club.

• Mark A. Schmitt said, “I worked at the Aitkin Co-op Creamery as a summer job from June to August in 1969. George Host was the chief butter maker and manager. I worked with a nanny named Dennis. We made butter twice a week. Farmers would bring their cream and milk to the creamery daily. We graded the cream by taste testing. Graded one through three, one being the best. Land O’ Lakes owned the creamery and the Aitkin Feed Store at the time and Donny Johnson was the bulk truck driver. He is now deceased. I worked at the creamery for a shift and went next door to work at the feed store. I enjoyed my supervisors, fellow workers and the clients.”

• Jim Cline said, “KLK Inc. bought the creamery about 30 years ago and made it into a warehouse storage. I worked with a crew who did demo work inside and did roof patching in the early 80s. I remember the smell of ammonia was nasty when the process piping was cut while we were gutting it out. We went to lunch and came back and the fire department was there dressed in oxygen masks. Our boss, Ken Kellar, had plans for a steakhouse and bar, but it would have been too costly. When we ate lunch on site, we would go through stacks of old paper. We found boxes of old invoices, receipts and checks. It was comical to look at how cheap every thing was.”

• Jim Blakesly said, “When I was a kid, my folks hauled cream to Mutual Creamery owned by Boyd Hakes in the west end of the Butler Building. Farmers had can coolers and the Co-op had a route to pick up the cans. The next day, cans were returned after being weighed, dumped and washed. Every day had two sets of cans. Then they moved to a bulk system where the milk was dumped into a bulk tank and picked up by a tank truck and hauled to the Co-op. Ed Coleman drove the can truck. Once the product arrived it was tested and weighed and put in an ammonia sweet water tank to cool it. In the early days, they made butter out of processed cream.”