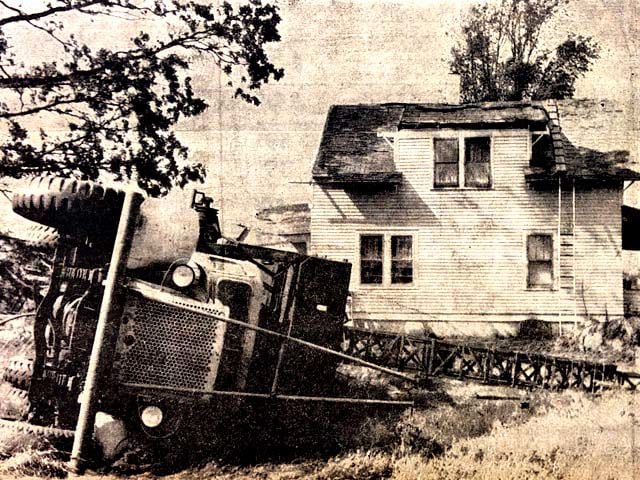 Hit and miss nature of tornado damage in northern Aitkin County is evidenced at the Eric Hillstrom property near Ball Bluff where the capricious twister crossed the Mississippi River to overturn a well drilling rig, nibbling briefly at the roof and eaves of the Hillstrom dwelling before eventually destroying a cement block cabin and approximately 95% of the wood grove in the campground area beyond the house. 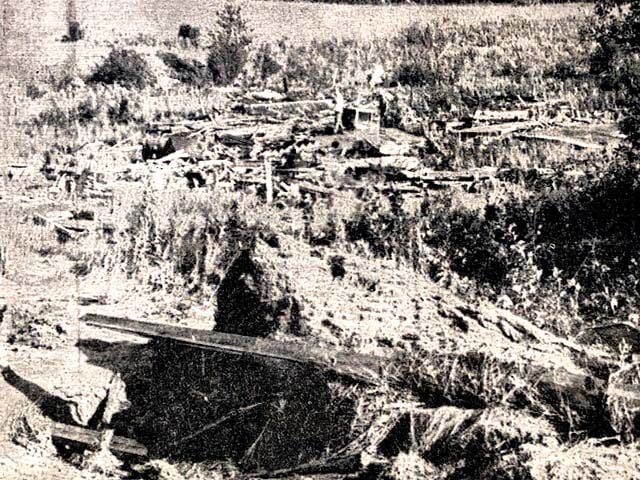 The scattered remains of tornado victim John Dahl’s home near Blackface Lake offer mute evidence of the tornado force which selectively plucked the dwelling from among four other adjacent buildings at his farm in the Ball Bluff area. 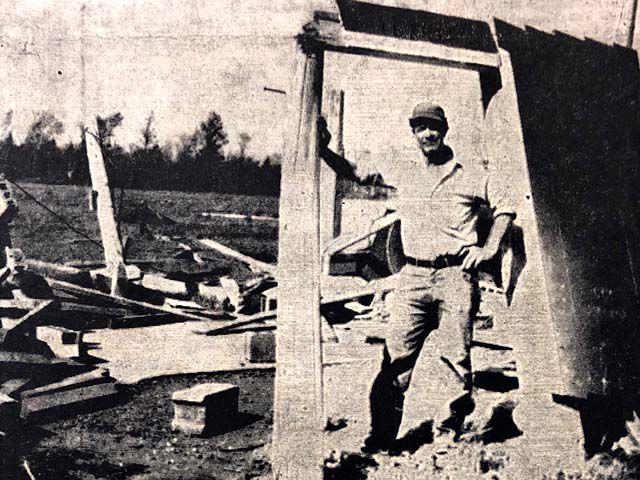 Pictured in the doorway of his defunct rice processing shed is Eric Hillstrom of the Ball Bluff area. A barn, cement block cabin and riverside camping area were also destroyed by the twister. “We heard a roar sounding like 20 locomotives,” said Hillstrom. “and my wife and I who were home alone at the time, headed for the basement.” A lifelong resident of the Ball Bluff area, Hillstrom is an employee of the Great Northern Railway. 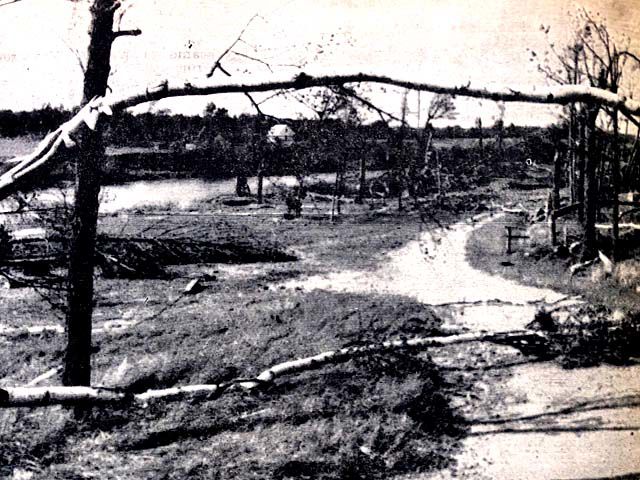 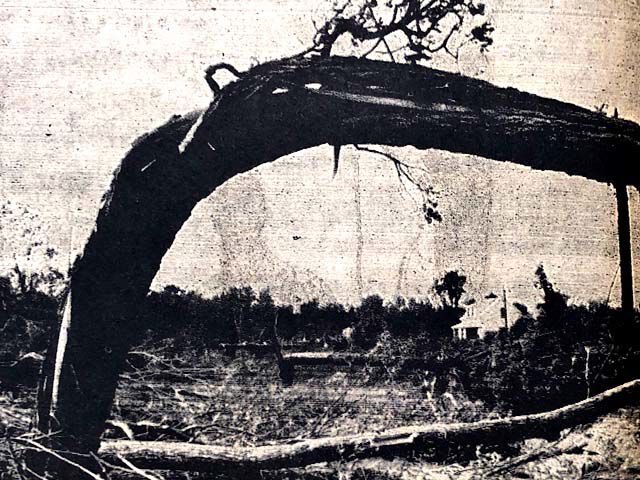 including a demolished barn and tractor, shed and a trailer house tossed into a nearby creek bed. The farm is located in Libby Township west of the Mississippi.

Aug. 6 marks the 50th anniversary of a 1969 tornado that swept through the Outing, Swatara, Hill City and Jacobson area in Aitkin County.

The twister that originated in the Outing area entered the county at Third Guide Lake and cut a swath averaging half-mile wide and 15 miles in length to the Washburn Lake area. Another twister touched down 10 miles north of Palisade and was 22 miles in length when it left the county toward Floodwood.

The tornado claimed the life of a Jacobson man, and caused damage estimated at more than $500,000 to county land, plus thousands of dollars of damage to private property, state and federal land.

The destruction of about 2,290 acres of county-owned timber represented a loss of about $300,000 to the community with a $30,000 direct loss to the County Tax-Forfeited Land Department, mostly from the Third Guide Lake area of of Shovel Lake Township where 1,500 acres of 30-40 year-old aspen, oak and birch were destroyed. About 70,000 feet of Norway Pine was also flattened. The remaining 790 acres of timber was located in Cornish Township around Blackface Lake.

The Aug. 13, 1969 edition of the Aitkin Independent Age detailed the destruction that local families endured as a result of the tornado. At the time, the storm was reportedly the worst ever recorded in this part of the state as far as property damage and loss of life was concerned.

Due to the shift of the tornado from the west to the northwest the village of Swatara was not touched. However, the tornado leveled the former Martin Bengston farm located a mile north of Swatara and took the buildings on the farm half-mile north of Willow River bridge. Clothes, white siding and insulation were blown across the Charles Klennert fields.

A 160-acre farm in the Swatara area, owned jointly by Larry Shields and Gordon Root, Aitkin, was also flattened. The house and barn were demolished and a tractor in the barn was destroyed. Root operated a funeral home in Aitkin for 50 years and has since passed away.

Mr. and Mrs. Buck Ashton lost much of their farm 2 miles south of Hill City in the tornado. The Ashton’s house and barn were lost and property damage was suffered. Mrs. Ashton and the children were uninjured when they took refuge in a concrete chicken house, which was set into a side hill. Buck was in Hill City at the time. The children’s 4-H dairy calves, which they were grooming for entry in the fair were killed when the barn was demolished, as was their pony. An Appaloosa stallion, and two pigs were also killed.

Much damage was reported in Verdun Township, 6 miles north of West Libby from Nylander’s place north to just south of Gilbert Lorentzens. The old Verdun school house, which served as a town hall, was demolished. Blandin Paper Company lost timber on its properties in the Cornish area and many others lost small buildings.

The places hardest hit were Okermans’ and Eric Hillstroms’ on the east side of the Mississippi River. Barns were completely destroyed and a trailer house at Okermans’ was demolished, parts of which were found 10 miles away. Mr. Okerman was away from home at the time the tornado hit.

John Dahl, Jr., 75, of Route 1, Jacobson, died as a result of the tornado striking his home. He was born on Jan. 16, 1894, in Sweden, and was a veteran of WWI with the U.S. Army. Dahl never married and is buried in Ball Bluff Cemetery.

Assistance in the form of three percent loans was available through the Farmers Home Administration to individuals who suffered losses for the necessary repair or replacement of buildings destroyed or damaged by the tornado. The KKIN radio station and the Aitkin Independent Age also held a fund drive to aid the victims of the tornado.

Warnings of extreme fire hazard followed the wake of the 1969 tornado, which cleared a path in from west of Outing to about 2.5 miles southeast of Hill City. In late August, the Area Office of the Division of Lands and Forestry reported that fire conditions throughout the county and especially in the area damaged by the tornado were critical. All lookout towers were occupied.

Leaves and smaller vegetation were left in shreds and many of the larger trees were in splinters. Hill City Forester Larry Gubbe said the vegetation would dry out quickly and burn readily. Equipment was impossible to move with the criss-crossed trees. Rainfall throughout the summer was below normal. The amount recorded in August of 1969 was .92 of an inch. This posed a situation where more property and lives were at risk in the fall fire season.

Burning was permitted in designated areas only or by special permit issued by the local district forester. Township fire wardens were instructed not to issue permits in the area involved so the forestry personnel can keep a close watch on all burning in the area, and if deemed necessary, could stop all burning immediately.

After visiting the area and conferring with officials of the Forestry Division charged with the responsibility of fire-fighting in the area, Representative Howard Smith of Crosby urged the state of Minnesota to take immediate steps to reduce the threat of fire in the areas of Cass, Aitkin and Crow Wing counties hit by the tornado.

Smith said, “The situation presents a fire threat so severe the state of Minnesota must move quickly to see that bulldozers are put to work to clear fire breaks big enough to enable the Forestry Department to contain fires.”

In a letter to Governor LeVander, Smith asked to call an immediate meeting of the Executive Council to draw on an annual $2 million appropriation to the council to provide enough funds for the State Forestry Division to take necessary steps.

Emergency funds were also requested through the Agricultural Conservation Program to assist in the cost of removing debris from farmland as well as repairing and replacing fences around the farmland due to the tornado.

Planting of pine, cedar and spruce on selected sites took place in an attempt to establish winter cover for deer. Most of the area was left to natural revegetation with selected areas periodically sheared or burned to assure a good supply of deer browse. Game and Fish, Lands and Forestry and Aitkin County were involved on the project. A similar project took place in the Blackface Lake area.