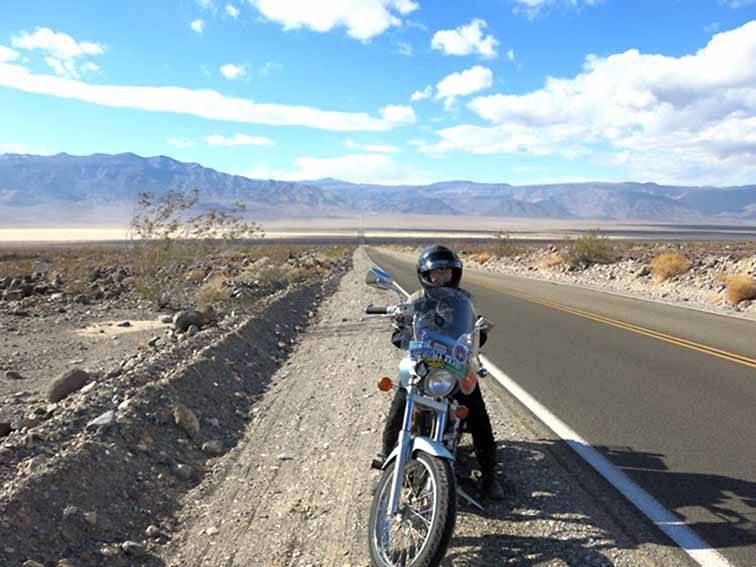 In 2014, Diamond Knispel set off on her motorcycle across the country. Her trip took her down the East Coast and then up along the Mississippi. 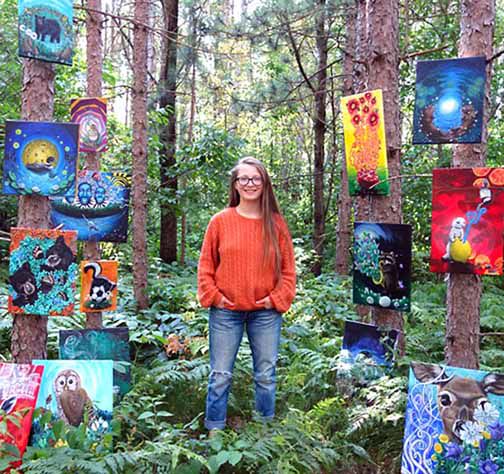 A self-described “woodsy girl,” Diamond Knispel, Bemidji, draws inspiration from nature and whimsy for many of her paintings.

In 2014, Diamond Knispel set off on her motorcycle across the country. Her trip took her down the East Coast and then up along the Mississippi.

A self-described “woodsy girl,” Diamond Knispel, Bemidji, draws inspiration from nature and whimsy for many of her paintings.

Bears popping out from a blueberry bush. A loon backdropped by a bright yellow moon. A mouse… balancing on a pair of chopsticks?

When it comes to her artistic creations, Diamond Knispel, Bemidji, likes to find an intersection between nature and whimsy. From her childhood growing up in southern Aitkin County to the art-filled career she leads today, Knispel has taken a long journey, in some ways, quite literally, to develop her artistic voice, and she continues to cultivate that voice today, with a number of projects on the near horizon.

FROM MCGREGOR TO BEMIDJI

In 2011, Knispel graduated from McGregor High School. She credited her McGregor art teacher, Mark Lemire, for the guidance he gave her at that point in her life. When she graduated, she had been considering pursuing a career in art education. Lemire had encouraged her to do so and gifted her a sketchbook and several books on art education. Knispel moved to Bemidji, though she ended up not attending the university there. She lived and worked in the town for two years. It was during this time she participated in her first art exhibition at a business in that area. She also began expanding on the commission work she had dabbled in during high school.

“Those first two years in Bemidji,” she explained, “I started to get paid a little better for my work, but I was still undervaluing myself. I thought I wanted to be an artist … that I could take off if I moved somewhere else … I had that itch to stop working a regular day job and be an art person.”

In 2013, Knispel’s artistic aspirations lead to her planning a move to Alaska, “in my cruddy, little Ford Ranger,” she recalled. “But instead, I ended up in Grand Rapids.” While attending the Mississippi River Festival put on by the KAXE radio station in Grand Rapids, she became acquainted with Lea Friesen, who worked for the MacRostie Art Center in town. This chance meeting led to Knispel getting a job with the MacRostie.

While at MacRostie, Diamond worked with art courses for individuals with disabilities run through Itasca Life Options, another program Friesen was involved with. Knispel had experience working with adults with disabilities, having worked at the Aitkin County Developmental Achievement Center as a summer job during high school and at the Northern Cass Development Achievement Center while in Bemidji. Working to support those with disabilities, she added, was a topic about which she was deeply passionate. Her work at the MacRostie also included art classes with high schoolers from the Northern Lights Community School in Warba. “So that’s how I got into art,” she said, “when I was recruited in 2013 to work at MacRostie.”

Knispel rented from Friesen during her time at MacRostie. “Basically, I ended up doing a year-long mentorship with this lady who has a master’s degree and a bunch of experience, so that was pretty awesome,” she said. Knispel’s stay with Friesen saw her branching out and exploring different mediums. Up to this point, her work had been predominantly with pen and pencil doing portrait commissions.

“I started exploring paint,” she said, “and things that weren’t colored pencil. I had a crayon phase, a marker phase, never really got into oils or pastels.” During her experimentation, she also became one of the first artists in residency at the Historic Central School in Grand Rapids, a city-run center for commerce, culture and community which neighbors the MacRostie. This program gave her access to a public study space where members of the community could see her at work. “And that’s when I began to move to doing things in house paint,” she said.

She started off working with unused paints that were given to her from random people’s garages. The end of her three-month residency saw her getting her first mural gig. While working as a barista at Grand Rapids’ Brewed Awakenings Coffee Shop, she suggested to her boss that something could be done to make the bathroom more interesting. “I did a big mural there, and she paid me for it.” Another mural soon followed at North Central Farm and Antique Association in Blackberry, Minn., as well as one with the high school group she worked with in Warba.

“I ended up from doing hardly any art, only using ink and pencil, to doing all these big art projects and getting paid good money a year later,” she said, “and that’s when I decided to take off on my motorcycle.”

After a year with MacRostie, Knispel had an opportunity to renew her contract. “But I had just planned I’d be there for a year,” she explained, “and then I’d see where the world took me.” The contract at an end, she purchased a motorcycle and set out across the country for eight months. She continued her art while on the road, switching back to pen and pencil.

When she first set out, she said her dream had been to circle the United States, travelling eastward to the coast, down to the southern border and then over to the east coast. She envisioned her trip lasting a year, but the death of her grandfather drew her back to Minnesota after eight months. She had also realized while travelling west through the mountains that the weather could be unpredictable. In actuality, her trip took her along the west coast and then back up along the Mississippi, following the Great River Road.

Reflecting on her choice to travel, Knispel said, “I kind of felt like you had to travel to be an artist. I really did it because I was young, and … I thought all artists died young ... I thought, ‘Yeah, I’m going to do this, it’s going to be really fun, and I might not come back. That’s okay!’ My legacy’s been left behind. But when I got back, I realized the art I left wasn’t as good as I thought it was.”

While she spoke of the trip with some regret, she added, “It was pretty cool, pretty inspiring.” She had hoped that while she travelled she could pick up mural gigs along the way. While she did find a few opportunities on the road, she noted, being able to supply paint for projects while travelling cross country on a motorcycle proved an issue. “I realized, for some things, you need a dedicated study space,” she said.

Back in Minnesota, Knispel returned to the Bemidji area and began living alone in a small, 16 ft. by 16 ft. home some distance from town. While she still made trips into town, she added, “It felt like I was out in the middle of nowhere … but I felt like a little hermit. That was a fun way to come back from the trip.” She began taking commission work again and working toward larger projects. She noted that it took some time to reestablish onesself.

“I realized while I was on the trip that setting down roots is sometimes the only way to do something,” Knispel said. While living at her remote home outside Bemidji, she met her partner, Cassidy, and together with him, she built her own home. This house was meant to be their “studio in the woods, a home base to create from.” She and Cassidy have now been living together for almost four years.

“And the exciting part,” she said, “is my body of work is starting to go places I like.” A few years ago, she returned to Grand Rapids to do a mural for the Klockow Brewing Company. The commission had been for a large forest scene. The project sparked a new interest in her toward plant life. “I’ve always been more of a woodsy girl,” she observed. While her body of work at the time consisted largely of flowers and nudes, her style began to shift toward this natural focus.

And to this natural milieu, she’s brought her own odd touch. Her nature-inspired work has begun to incorporate both flora and fauna and what she describes as a “surreal twist.” It wasn’t surreality in the abstract, Salvador Dali sense, she added, but more a sense of whimsy or magical realism. To create some playful dissonance, some of her pieces include manmade and human objects to contrast with their natural elements. Some of these pieces also attempt to capture how weird the natural world is on its own, without using this contrast.

In the near future, she will be working toward featuring these pieces in an exhibition, “Wild Whimsy of the Northwoods.” As planning for this showing was still in its early stages, a location and date were not yet available.

Explaining her influences, Knispel pointed to the album cover art of the ’70s, citing both Heart and Fleetwood Mac. “You see how cool the shapes and stuff are … It’s just this weird thing that really took you into a story.” Her influences also included the works of Theodor “Dr. Suess” Geisel and Norman Rockwell. Both were artists whose influences went back to her childhood. She noted that Geisel’s children’s books were awesome, people often overlooked his body of adult work. As for Rockwell, she appreciated his ability to tell a joke through his art. Along with these well-known creators, she once again credited the teaching of Mark Lemire at McGregor, as well as Matt Fredrickson, another artist from the McGregor area who mentored her.

Outside her artistic endeavors, Knispel also works for the nonprofit organization Headwaters Music and Art as marketing and arts program coordinator. Through her work, Knispel helps organizes art classes, clubs and camps for all ages and all ability levels. Her career has been a journey – across the country, between mediums and styles and through young adulthood. Since her days as a McGregor student to the work she does today, Diamond Knispel has mapped a dedicated career of not just making art, but sharing art.

Those looking to see more of Diamond Knispel artwork can pay a visit to her personal website, www.diamondraraavis.com. She also posts regularly to her social media – on Facebook (@DiamondKnispelArt) and Instagram (diamondraraavis).