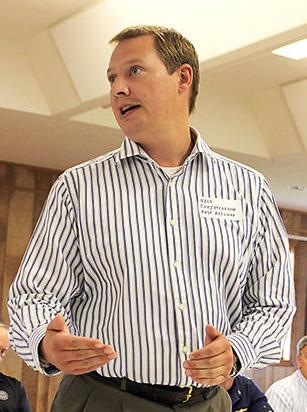 Christianson told emergency management representatives what BNSF would do in a disaster situation of spilled crude oil. 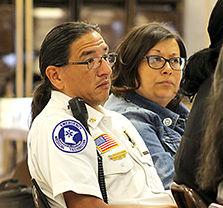 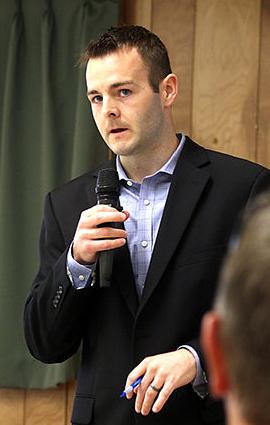 The meeting in McGregor Sept. 10 which brought together local, state and federal entities which would respond to a disaster such as an oil tanker derailment.

Christianson told emergency management representatives what BNSF would do in a disaster situation of spilled crude oil.

The meeting in McGregor Sept. 10 which brought together local, state and federal entities which would respond to a disaster such as an oil tanker derailment.

Sponsored by the United States Environmental Protection Agency, more than 60 prominent figures from the McGregor Fire Department all the way up to Homeland Security gathered at the McGregor Community Center Sept. 10 to openly discuss their roles in a scenario of a crude oil spill along the rail line in Aitkin County.

Sept. 10, 2015: 7:15 a.m. – An eastbound Burlington Northern Santa Fe (BNSF) powered train originating in North Dakota has derailed approximately 5 miles west of McGregor, MN. The train is composed of a three-unit locomotive pulling 105 Department of Transportation type 111 tank railcars laden with about 3 million gallons of North Dakota Bakken Crude Oil. Of these cars, 29 tank cars have derailed immediately north of Portage Lake, Kimberly State Wildlife Management Area and the Rice Lake National Wildlife Refuge. The derailed tanker cars came off the tracks while passing the northeast point of Portage Lake. Of the 29 derailed tank cars, at least six have exploded and are on fire; at least nine are believed to have released product. Flames from the tank cars on fire are high and a significant volume of smoke is being released from the burning oil. All other cars remain on the track.

Current meteorological conditions are the following: sunny with zero precipitation; temperature is 65 degrees and wind is coming from the west at approximately 9 mph. There is a 40 percent chance of precipitation and wind speeds are expected to increase in excess of 15 mph around 10 a.m.

Facilitated by Aaron Stevens of Tetra Tech, Inc., Stevens asked those in attendance during the first of three modules of how the situation would be handled from initial response to capabilities of managing a large-scale hazardous materials release incident. Main focuses of the tabletop exercise included operational coordination; operational communications; environmental response; health and safety; public information and warning; and critical transportation and evacuation.

The objectives of the exercise were to discuss the process of establishing incident/unified command and the transfer of command throughout a crude oil train derailment incident; discuss the process for delivering clear and unified messaging that will direct the public to take certain precautions and ensure affected residents are receiving necessary information; and increase participants’ understanding of the interagency coordination process between tribal, county, state and federal government agencies, and private sector organizations.

Stevens made it clear to those in attendance that the discussion held was not the “last remark from your agency” on how it would react in a situation such as this.

Nels Christianson, representing BNSF, was asked what the railroad company would do to report the accident. The conductor would call the Fort Worth, Texas center, which would then notify local law enforcement. If the crew of the train were disabled or dead, it would be up to local law enforcement to contact Fort Worth.

In order to reach the National Response Center – a 24-hour manned call center operated by the Coast Guard – which is capable of deploying many resources, the duty officer, located in St. Paul, would have to be notified.

The first officer on scene would establish who’s in charge, and in this scenario, the McGregor Fire Department was selected. A command center would need to be set-up, its location based on the conditions at the scene. Communication assets would then be set-up, and a specialized channel for responder use would be opened through Aitkin County Dispatch. Aitkin County would make use of the ARMER radio system for the event.

Several other entities would then be contacted, from Homeland Security to MnDOT to the Minnesota Department of Health to the Minnesota Pollution Control Agency. In order to get local residents out of the area, public health would be notified and find a safe place to house displaced residents. Because of the wind conditions in this scenario, the McGregor school would be unfit; Stacey Durgin, Aitkin Public Health, said Long Lake Conservation Center, Hill City schools or a neighboring county would be considered.

Other elements discussed in the first module conducted during the training included timing of receiving resources to what identification badges from each agency looked like.

An update five hours in was also presented to the group, including heavy smoke from the tanker car/oil fires shifting in the direction of the Rice Lake National Wildlife Refuge and the East Lake Community of Mille Lacs Band due to strong westerly winds. Small grass fires have been reported and thick, dark residue on lots of vegetation is reported around the refuge area. East Lake Community homes have heavy smoke and fumes, leading to several residents complaining of having trouble breathing.

BNSF would be building land berms, fire foam trucks would be deployed by the company and equipment would be coming to the site of the disaster. Christianson said BNSF, with its contractors and other staff, would have around 100 people at the site alone. Draper said the East Lake Community Center would be opened for housing staff.

Public health was asked how far out it needed to look – not just to those in the immediate vicinity of the derailment but for those who might be impacted by any byproducts of the fire and smoke.

In the second of the three modules, information of the actual crash changes – 24, not 29, cars have derailed and it has been confirmed six cars have exploded and caught fire and at least nine cars have released product. Oil released from the tankers that has not been consumed by the fire was released from cars to the ballast, adjacent embankments and directly adjacent to Portage Lake. It has been confirmed that a large quantity of oil has made it into the lake before containment berms were put in place. Other changes to the scenario include Hwy. 210 being directly impacted by smoke from the tanker cars.

The tabletop participants were made aware of another new hazard at the site – the vacuum trucks from BNSF now operating in tight spaces.

Media inquiries have started by this point, and the need for a public information officer is now an important asset to make sure only one message is getting out from the site and that the information getting out is accurate. Stevens also stated the local chamber of commerce should be involved in the short-term needs of all the people coming to the area and maintaining services.

Sept 14, 2015: 7:45 a.m. – in the final module, around-the-clock shifts continue, and the incident management teams transitioned to a formal unified command. A containment boom was deployed on the waterways and an earthen boom was constructed around the derailed tanker cars and waterway to contain additional run-off of oil or oil/water mixture. The evacuation of nearby residents was lifted and fires fully extinguished.

Heavy equipment is on scene, wrecked tanker cars were separated, up-righted, cleaned and purged and split for removal. Product remaining in the tanker cars or on the ground was pumped into temporary storage tanks. Among other changes, a temporary track is being installed so freight could continue. Community air monitoring is in place and has continuously returned low, non-hazardous particulate readings.

The tabletop exercise discussion began with cleanup of the Rice Lake Wildlife Refuge. Walt Ford said vegetation, migrating birds and fisheries would be affected, but the staff would attempt to keep migrating birds out of the water.

BNSF would continue to clean up the site, and checklists of what needs to be cleared are reviewed.

Cost was also discussed. While BNSF is ultimately responsible in this incident, Stevens made it clear to all involved to make sure all expenditures are listed while dealing with the scenario. Activating emergency budgets at the local, county and state level were also discussed.

The tabletop exercise concluded with strengths and weaknesses found during the four-hour discussion. Weaknesses included putting too much initial pressure on the county dispatcher to get calls out to the responders and not having the schools in attendance of the meeting. Strengths were having communities working together, forging mutual agreements and the use of ARMER radio.

All of the resources spent on what to do WHEN a leak/disaster occurs. Too bad more attention can't be paid to prevention, or not having the pipe line there in the first place. So much for beautiful, unspoiled Aitkin County.