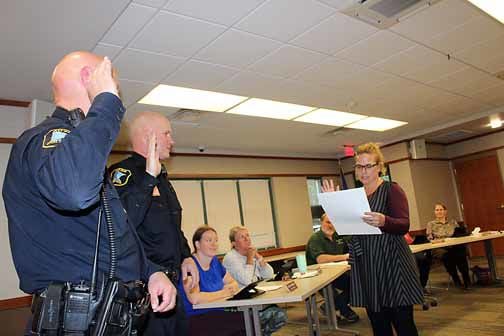 Paul Ryan and Shawn Brown are sworn in as assistant chiefs by City Administrator Kathleen Ryan. 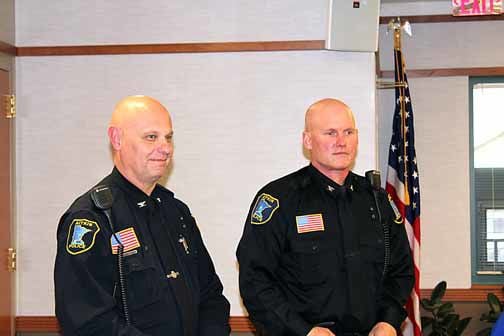 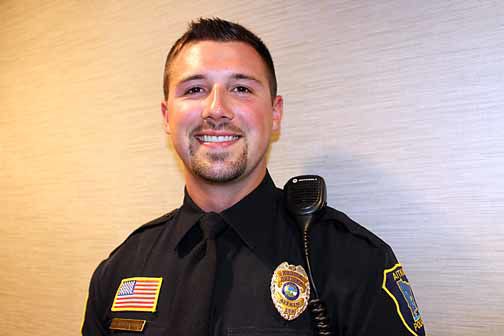 Officer Cody Schwinghammer was sworn in at the Sept. 3 meeting. 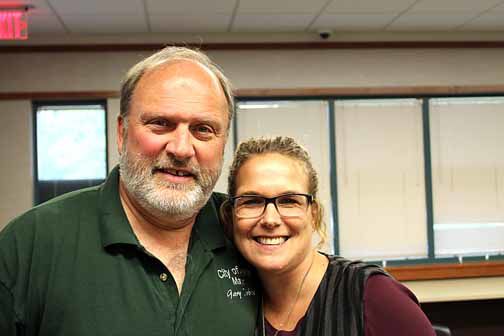 Mayor Tibbits and council members spoke of their appreciation for the work Kathleen Ryan has done for the city.

Paul Ryan and Shawn Brown are sworn in as assistant chiefs by City Administrator Kathleen Ryan.

Officer Cody Schwinghammer was sworn in at the Sept. 3 meeting.

In an emotion-charged Aitkin City Council meeting on Sept. 3,

The action was also the last official duty performed for the city council by Kathleen Ryan, who is leaving to take a position with Aitkin County.

The three officers had their badges pinned by family members as the other officers, council members, Mayor Gary Tibbitts and Police Chief Tim Catlin looked on.

“We are very proud of Cody,” said Catlin. “He has always said, ‘Whatever you need me to do,’ when I have made a request of him. That means a lot to me. Cody is a great young man and we are very proud to intoduce him into our department.”

Paul Ryan is the School Resource Officer for Aitkin, and Shawn Brown is the DRE officer. Brown has performed the D.A.R.E. program for the Aitkin Schools. Both officers are highly valued by the school district and the city of Aitkin, said Catlin.

Kathleen Ryan reported that the Otto Bremer Foundation granted $75,000 to the city, to go toward the warming house and hockey rink project. Those funds will go toward the match required for the grant received from Minnesota DNR for the project.

Owner Sylvia Allen recently showed Kathleen Ryan the space available in the Butler Building for city offices. The city is looking into leasing the space until such time as it is determined that a new building is needed and the funding is appropriated. The Butler Building space would be suitable, accessible and visible, all of which are important considerations for the offices of a city government, said Kathleen Ryan.

The roof of the city hall building was damaged by a storm earlier in the year. The cost of replacing the roof may fall under the threshold  that would require the city to obtain multiple bids. However, Street Commissioner Bob Nicko is requesting the League of Minnesota Cities to assign an alternate adjuster. Nicko and some others have reason to believe a different adjuster would better meet the needs of the city.

The preliminary levy is set at 9.71%. A public meeting was set for Dec. 2, which is a regular meeting of the city council.

The USDA funding for civil defense sirens and a backup generator for the Street Department will be in the form of two separate grants. The council unanimously approved accepting the grant that will fund the purchase of two new sirens. The second grant for a backup generator will be approved separately.

Kathleen Ryan said the parks committee is looking for assistance from the city to get the old warming house demolished. Any time and equipment donated could be used as an in-kind match for the recreation grant from Minnesota DNR, she said.

Clif Allen of Moore Engineering provided a routine update to the council on the status of the project.

Although the project is a little behind, Allen said that all that remains is some curbing, striping and some other finishing details.