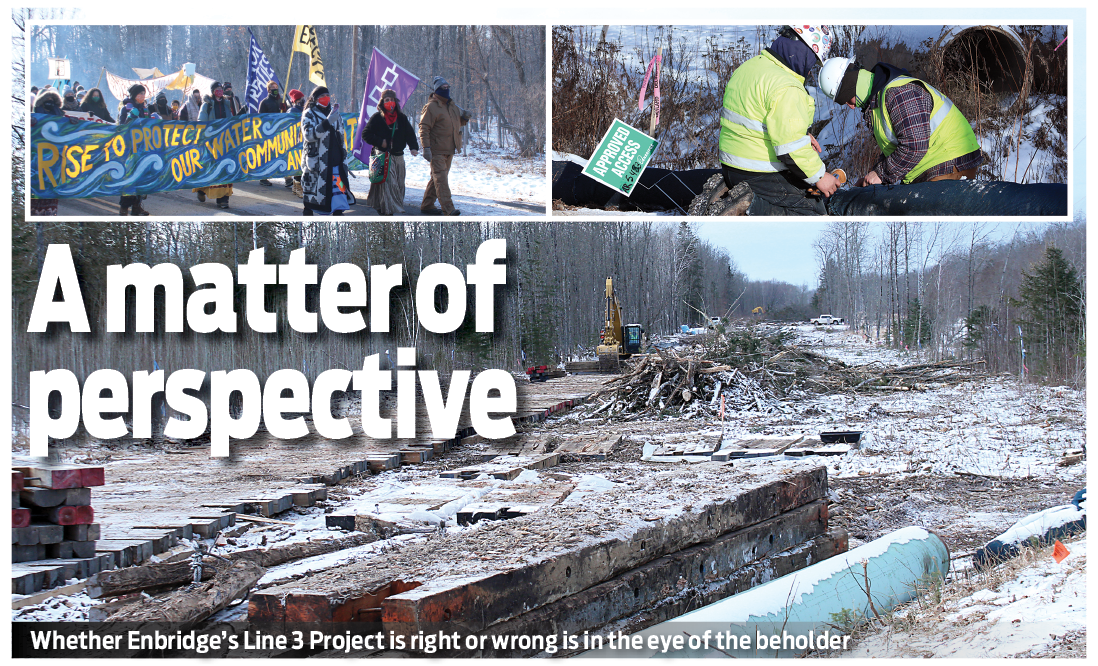 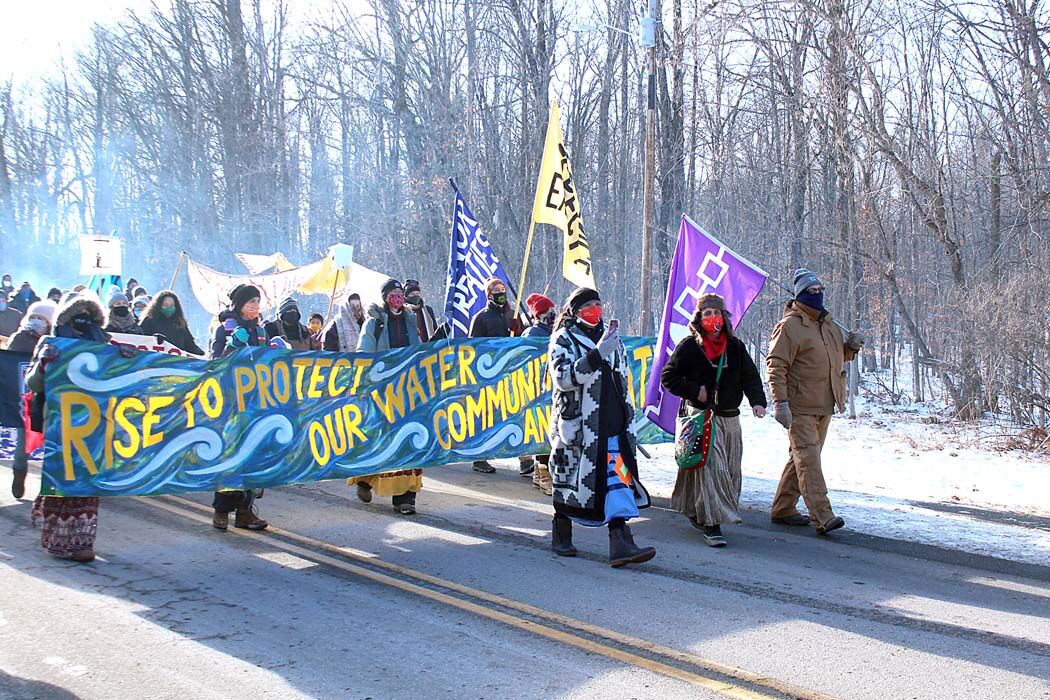 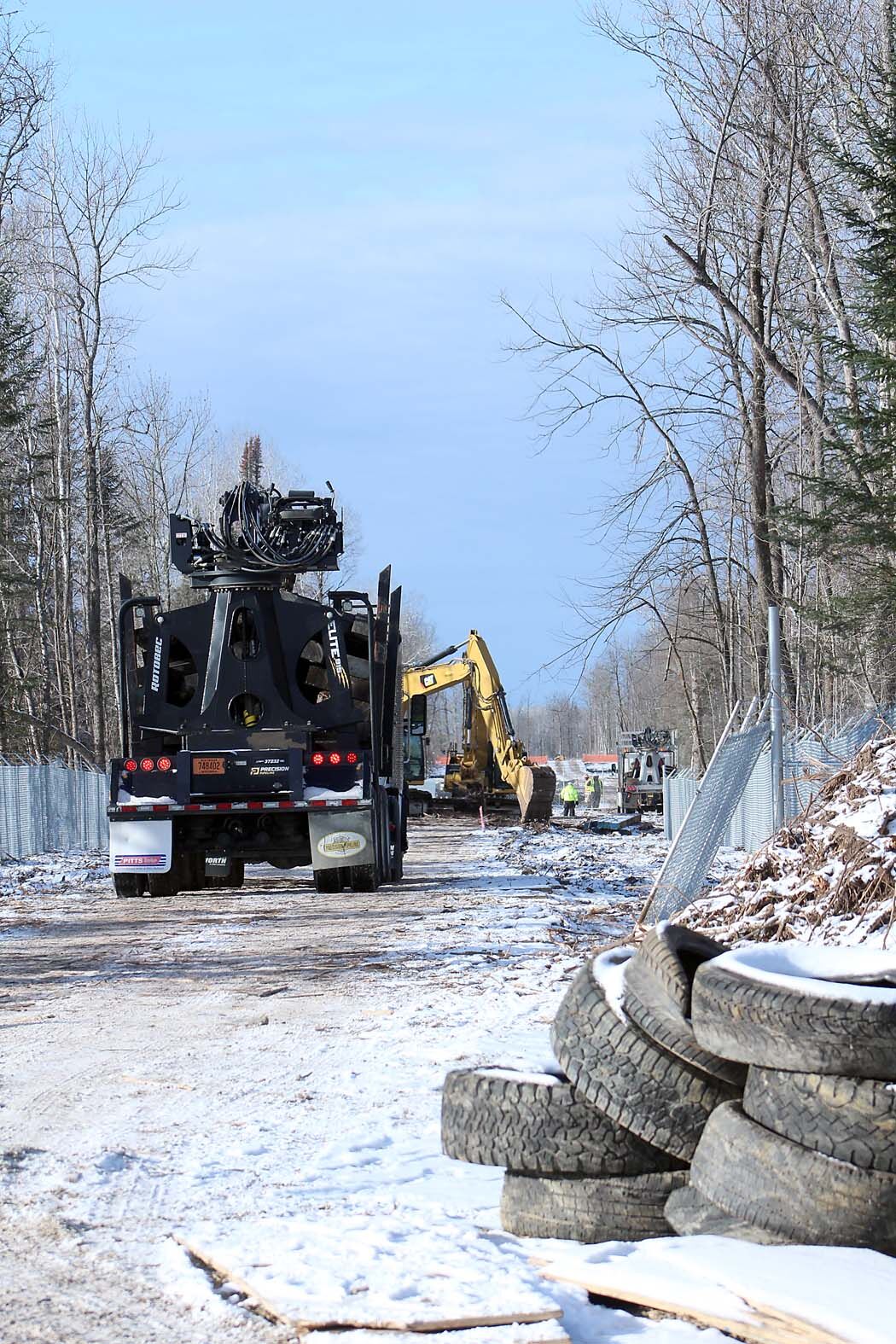 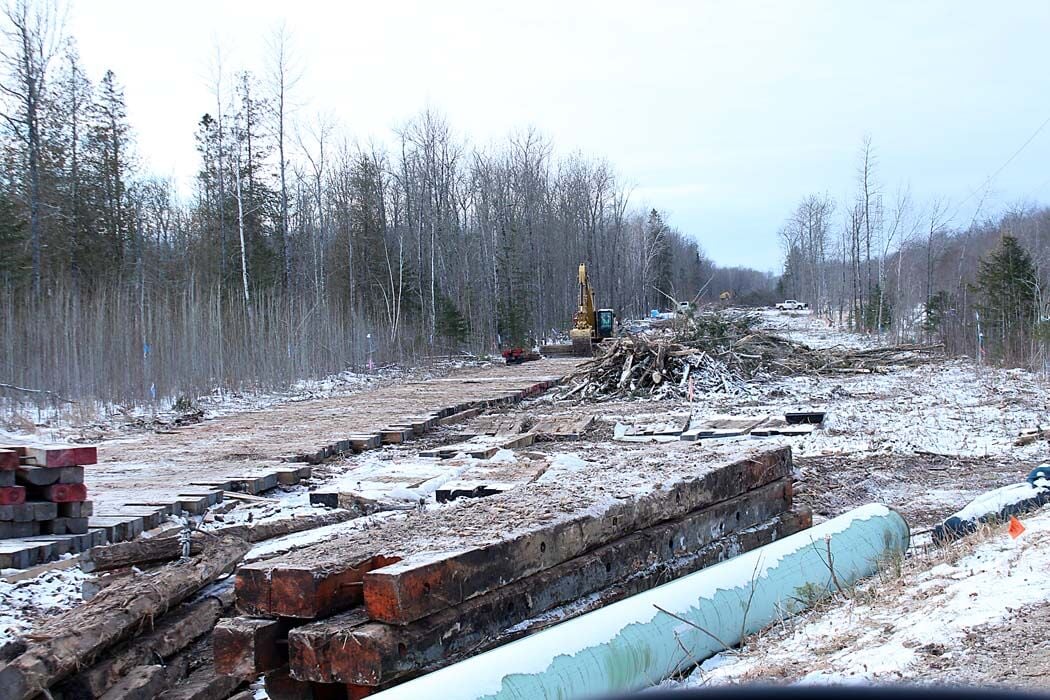 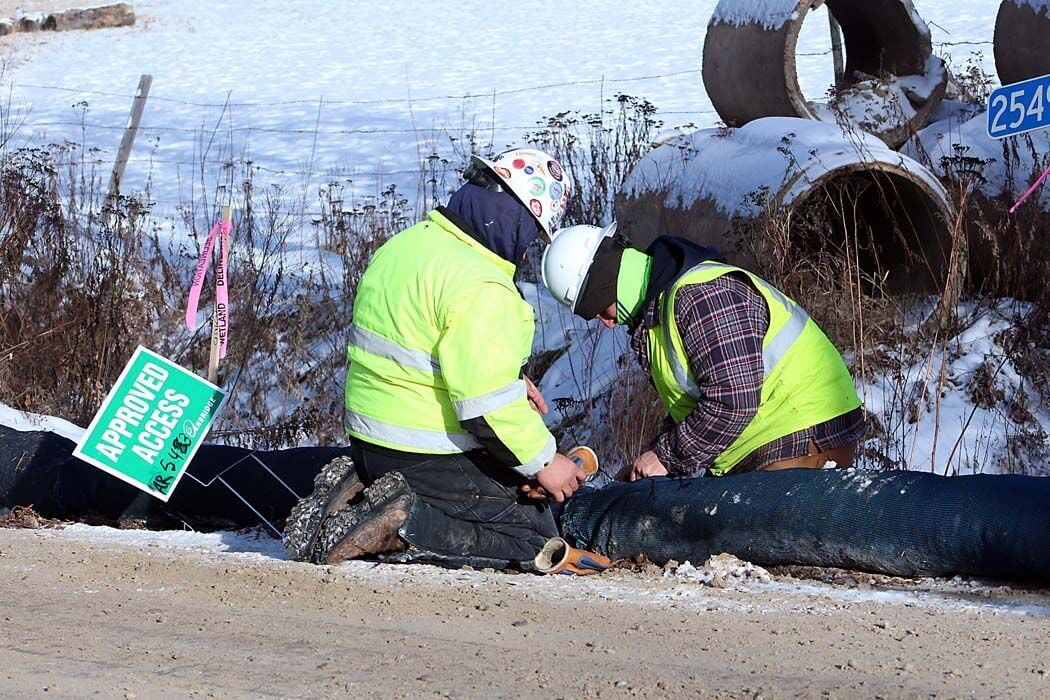 Destruction of water and land.

Three different views of the current Enbridge Line 3 project can be, for the most part, summed up in those three statements.

Those are the three sets of people standing guard at the site of the work right now, each filling different roles.

Who is right? Who is wrong? Does it matter anymore now that the project has started?

These questions – and more – have been asked over the last three weeks, as work on the pipeline has begun. More often than not, answers to those three questions above are contradictive at best – and vitriolic at their worst.

Dec. 17 marked another rally, as those who call themselves water protectors, media and law enforcement all gathered on Hwy. 10 east of Palisade, led by Sharon Day and Minnesota Interfaith Power and Light. There was a rally and a prayer vigil, with the noise of construction in the background of the normally quiet road. In the end, there were no more arrests, though 22 had been arrested earlier in the week.

Here are three interviews, from the perspective of Enbridge, area law enforcement and from one of the leaders of the activists at the site.

The Line 3 Replacement Project is 340 miles long in the state of Minnesota, divided into five geographic areas – or spreads – and eight pump stations.

Barry Simonson, the Line 3 Replacement Project director, stressed that the project is safety focused – and that Enbridge has met every standard asked of it over the last six years.

“Line 3 is the most studied pipeline project in Minnesota history,” said Simonson in a written response to questions. He said that 30 tribes consulted with the Army Corps of Engineers throughout the process – and that Enbridge’s project has passed every regulatory and permitting review.

“When the Minnesota Public Utilities Commission recently reconfirmed its previous approvals of the replacement of Line 3, we hoped all parties would come to accept the outcome of this thorough, science-based review,” Simonson said.

He added that Enbridge is following all of the permit conditions that are intended to protect both the wetlands and water bodies in the area. The line will cross the Mississippi River twice, and Simonson said that the river is one of many “environmentally sensitive resources.”

Currently, there are about 3,000 workers across the state working on the project, a number that will increase to 4,000-plus at the peak of construction.

Spread 4, which includes Aitkin, Cass and St. Louis counties, has about 700 workers. More than 50% of that workforce comes from union halls across the state, he said. Kevin Pranis, the marketing manager with the Laborers’ International Union of North America (LIUNA), said Dec. 17 that safety is the top concern of those workers.

“It is critical for everyone to be vigilant and practice safe, responsible and respectful actions – workers and protestors – so everyone goes home safely at the end of each day,” Pranis said in a written statement.

“It’s emotionally draining,” he said after a full day at the work site, where he and other law enforcement officers worked to remove the activists on the site. “There comes a point where you can explain the same thing to somebody over and over and over again (and no one listens).

But Guida said that in spite of explaining that numerous times, it’s not enough for people.

“They want us to take their side,” Guida said.

Guida explained that a number of law enforcement agencies have banded together to form what is being called the Northern Lights Task Force. Law enforcement officers from 13 different counties that the Line 3 project runs through – as well as surrounding counties – have been working together a long time, knowing they would have likely been dealing with protests along the Line 3 work.

He said every sheriff has an equal part in the task force, but everyone coming to Aitkin County is under the direction of the Aitkin County sheriff, and is in uniform. There were, however, questions asked about unmarked trucks that some had presumed were private security hired by Enbridge. Guida said that there are observers hired by a company that has contracted with Enbridge, present in private vehicles and plainclothes.

If someone has concerns about a vehicle or their safety, Guida said, call the sheriff’s office and report the vehicle to dispatch.

Right now, Guida said, he is working to make sure his officers are not getting “burnt out” covering the situation – something that has become harder to do as the sheriff’s department has had to log extensive overtime.

Guida said that, as of now, taxpayers are footing the up-front costs. There is an escrow account – set up as part of the permitting process – that will eventually cover at least some part of the cost, but right now, he and other agencies are waiting to see someone put in charge of the fund.

In the meantime, his employees – and likely others in law enforcement – are stuck in the middle.

“I understand the energy of the people who do not want the pipeline here,” Guida said.

“The construction workers are very passionate about the pipeline going in.

“All this energy all around us, and we’re supposed to stand there and not absorb any of it.”

In a word, Winona LaDuke, the head of Honor the Earth, is angry.

After spending seven years in court trying to “make the system work,” from her view, Enbridge is taking advantage of the pandemic and pushing the pipeline through while it has a chance.

“It’s horrible,” LaDuke said. “68,000 people went out and testified against this.

“It’s a slap in the face,” she added, saying that Honor the Earth, other organizations, the White Earth, Red Lake and Mille Lacs bands, as well as Friends of the Headwaters.

“We’re fighting for the water of the state of Minnesota, which the state is giving away to a Canadian corporation. They’re giving it away in a time of conflict, and it’s not a good policy.”

LaDuke said that the oil industry  involving tar sands is already struggling, even collapsing. At the Dec. 17 rally, she reiterated that, and added that the world is moving forward quickly with electric vehicles, with the United Kingdom bringing forward a ban on fossil-fuel vehicles by 2030.

“I’m just saying, we’re going to be in electric cars, too,” LaDuke said.

“This isn’t a jobs program for Minnesota,” she said. She also added that Enbridge’s push forward with the work during the COVID-19 pandemic is difficult to understand.

“Why didn’t they just wait until the vaccine was here?” she asked.

Right now, there are several cases in the courts, all aimed at stopping the Enbridge work in spite of the permitting process having been completed.

That, she said, is why people feel the need to break the law to try to stop the work.

“I think that once we’re in court, it’ll be done,” LaDuke said, adding that all pipelines have leaked. She owns property that adjoins the work being done in Aitkin County.

The Dec. 17 event remained quiet and peaceful, with the group gathered by the water for prayers for a little more than an hour, praying for more than Line 3.

“It was like the river was our teacher,” said Julia Nerbonne of Minnesota Interfaith Power and Light, which helped lead the prayer vigil.

“The question is: where do you go from there?” she added. “This isn’t just about one pipeline. This is about the birth of a new way of thinking.”