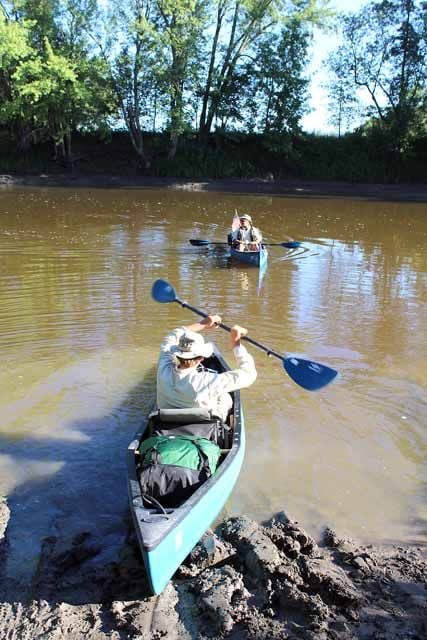 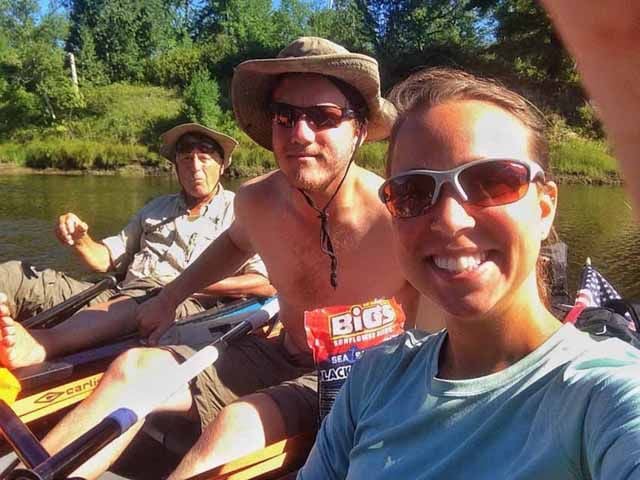 “I’ve never canoed in my entire life,” said Murphy, a U.S. Army veteran who served in the military police from 1984-90.

Murphy and experienced paddler, Annie Balthazar, were blazing the way for Warrior Paddle, with two more veterans, Mark Fox and Bart Lindberg, a few days behind.

“I never had a chance to transition from my combat experience in Iraq,” she said. “I perfomed over 1,000 anesthetics. We were bombed 106 times. It had a profound effect on me. [Warrior Paddle] is a chance for me to decompress and ‘paddle off the war,’” said Balthazar.

Murphy and Balthazar found there was too much lag time in the pre-scheduled stops at VFW clubs along the river. At Aitkin, the paddlers split into two groups at different paces to see which will work the best for future Warrior Paddles, Murphy said. Balthazar noted that the VFWs have “really reached out” and that Jeff and Helen Workman from Aitkin “are angels.”

Balthazar said she and Murphy will be following the natural course of the Mississippi River via the Atchafalaya River in Louisiana.

“It’s the largest swampland in the U.S.,” she said, “and travels through bayous.”

“I changed so much for the better,” he said.

Murphy decided he wanted to raise money for Warrior Hike and instead became a member of the program, offering to go on hikes or paddles with new veterans. On this trip, he and Balthazar are carrying minimum gear (20 pounds) because future trips may include disabled veterans who may not be able to tote a lot of gear.

Asked if there have been any surprises, Murphy said the beauty of Minnesota was unexpected.

When he completes the Warrior Paddle, Murphy plans to work at a ranch in Arizona.

Fox and Lindberg arrived in Aitkin by the scheduled date of Aug. 15 and met with members of Aitkin VFW Post 1727.

Fox and Lindberg are both Minnesotans. Fox said he was hiking the Appalachian Trail when Warrior Expeditions’ founder Sean Gobin called him to be a member of the first paddle group.

Fox grew up in Milwaukee, Wis., and after he graduated from high school, he enlisted in the U.S. Army when his parents agreed to sign for him (he was 17). With the 101st Airborne, he was an air traffic controller from 1969-71, the last year of which was a tour in Vietnam.

“My wife and I like to do charity work,” said Fox, who was also a volunteer firefighter for the city of Eagan and experienced in cold water rescue. He was a deputy sheriff in water patrol for the Hennepin County Sheriff’s Department.

He and Lindberg, like Murphy and Balthazar, are on the maiden warrior paddle to determine the challenges for disabled veterans who come behind them. Fox said he is finding areas with a lot of mud and some campgrounds are difficult to get into.

Lindberg moved around Minnesota a lot growing up but currently calls Brainerd home.

While he served in the Army, 2011-13, he was a watercraft operator and also worked as a small arms specialist, a firefighter, in damage control, rescue swimming and logistics over the shoreline.

“Every day is exciting,” said Lindberg. “You don’t know what’s going to happen – the wildlife you’ll see or the people you’ll meet. This is an experience of being in the woods in survival mode. It brings us back to the basics of how to live life. The tranquility is like no other feeling.”

After the trip ends, Lindberg, who has also walked the Appalachian Trail, said he wants to earn a degree in small engine repair at Central Lakes College. He is also interested in robotics, smart appliances and renewable energy.

“I’ve been networking on the Mississippi,” he said.

The men are accompanied by Abby Kaeser who is photographing and blogging about this Warrior Paddle.

“We really appreciate the VFW, the American Legion, Disabled American Veterans and Terry Buttenhoff for their support,” said Fox.

The trip may be followed by visiting warriorhike.org or abbykaeser.com.