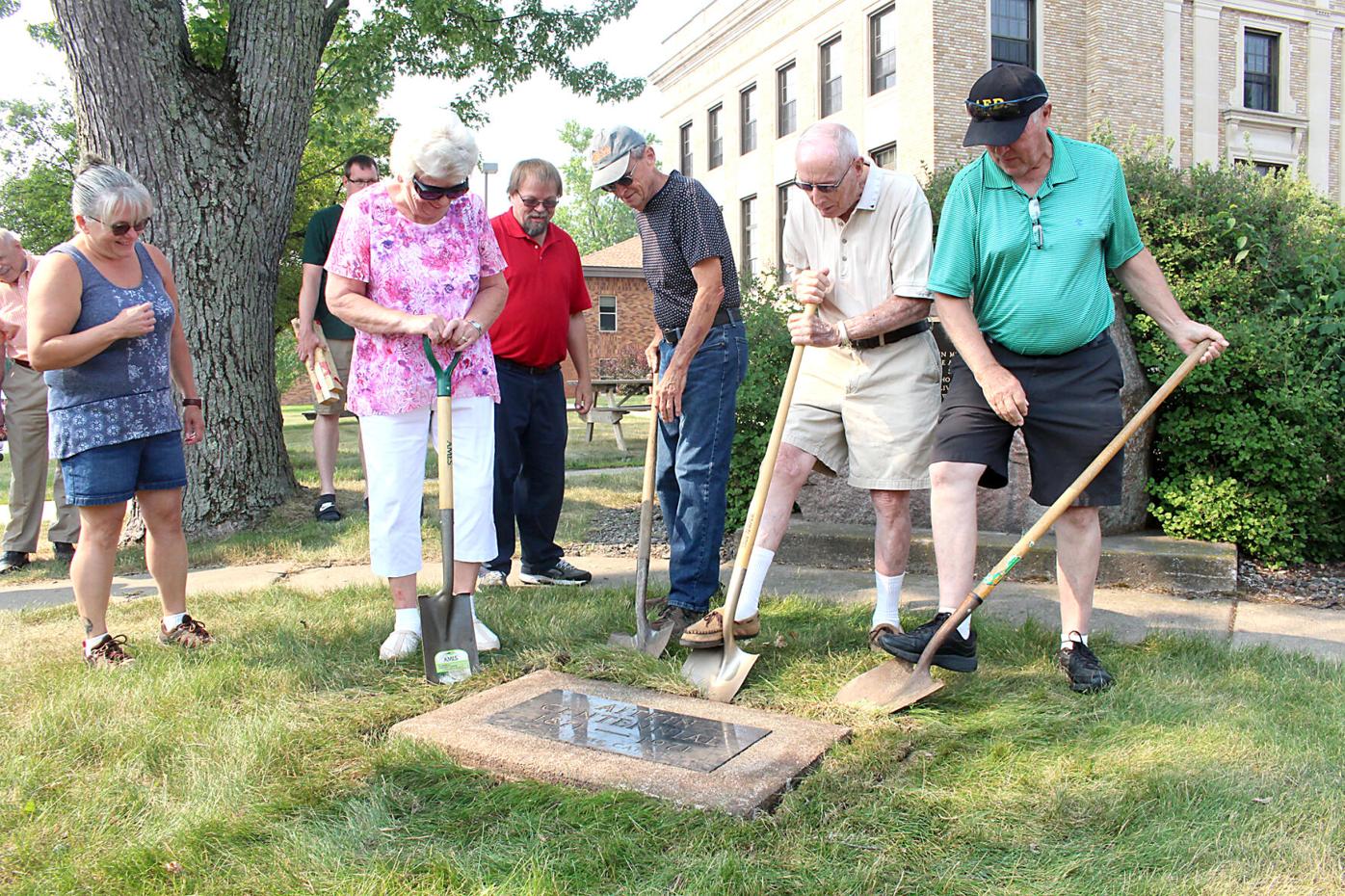 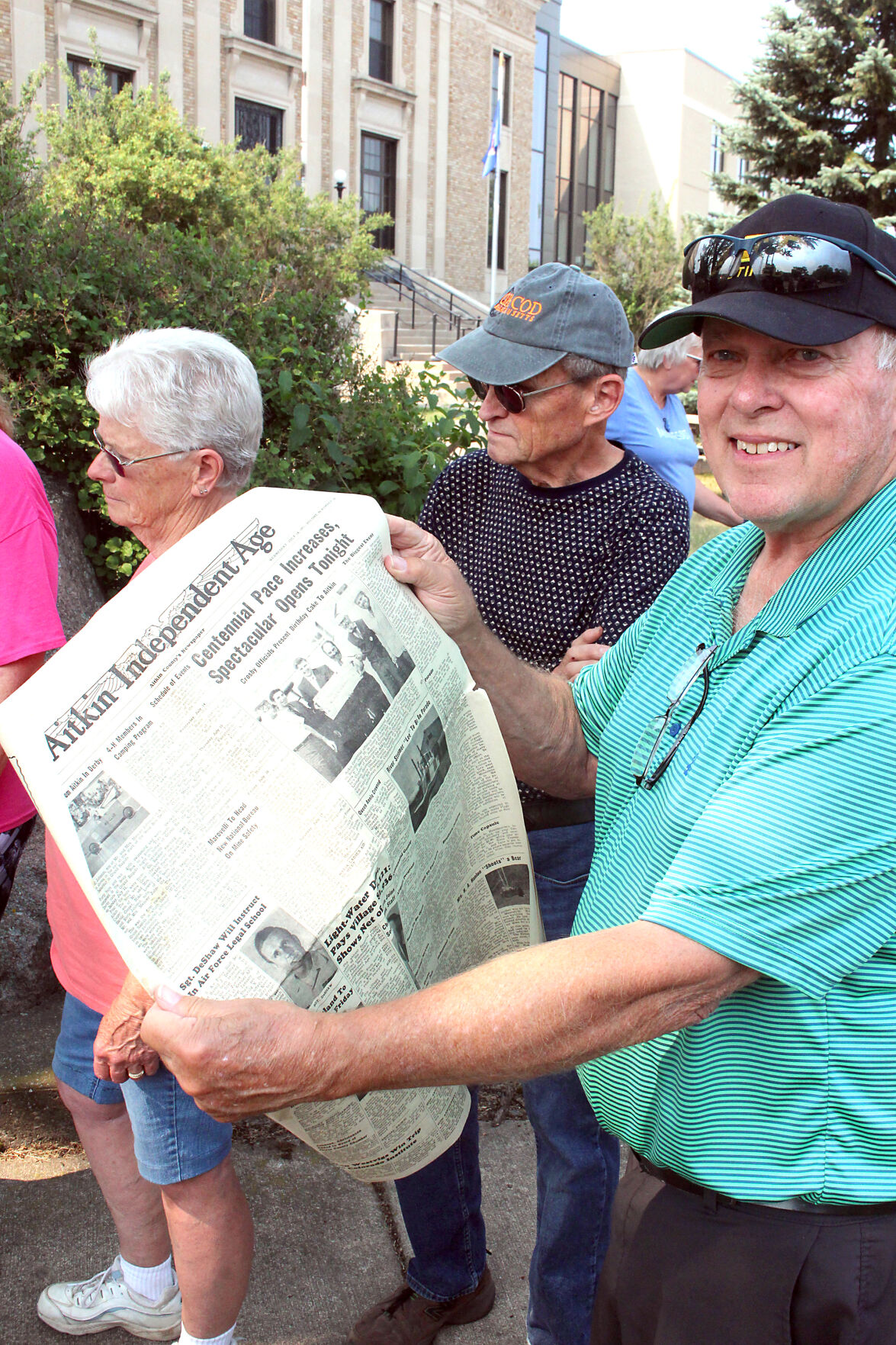 Aitkin resident Rich Fannemel holds up the front page of the Aitkin Independent Age from July 14 1971, which featured the Aitkin Centennial celebration. Fannemel was present for the opening of the time capsule that was buried 50 years ago Saturday. 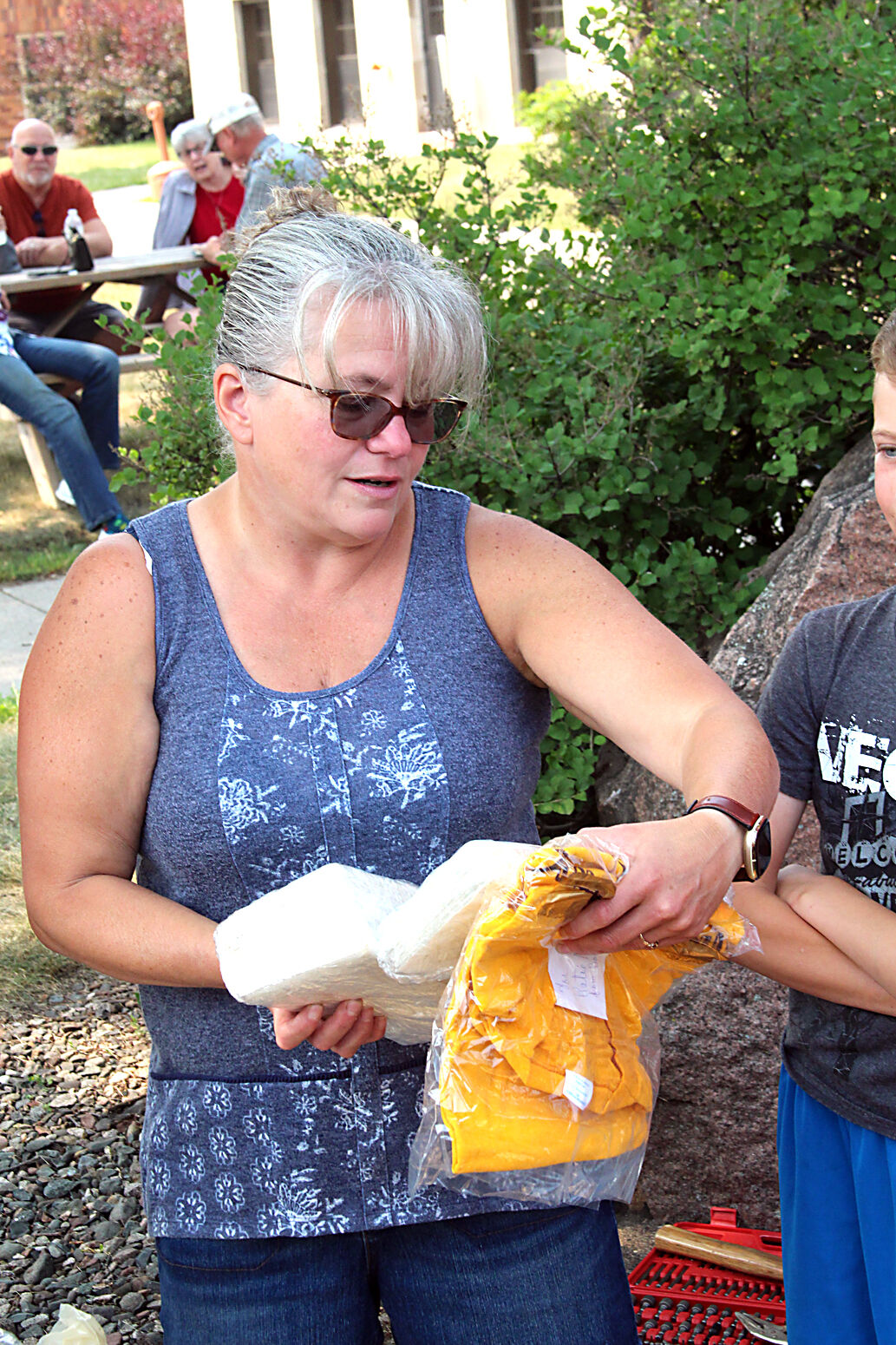 LeeAnn Moriarty helps unpack the Aitkin Centennial time capsule July 17. Included in the capsule were hundreds of letters left by residents during the 1971 centennial year.

Aitkin resident Rich Fannemel holds up the front page of the Aitkin Independent Age from July 14 1971, which featured the Aitkin Centennial celebration. Fannemel was present for the opening of the time capsule that was buried 50 years ago Saturday.

LeeAnn Moriarty helps unpack the Aitkin Centennial time capsule July 17. Included in the capsule were hundreds of letters left by residents during the 1971 centennial year.

It took about 15 minutes to dig the capsule free of the dirt and roots in which it was encased.

Then the fun began, as numerous people took on the task of unscrewing bolts that were 50 years old.

The jokes and humor ran long Saturday, but as the last bolt was removed and the capsule opened, those in attendance got what they came for – a look at the past.

“As the calendar flowed, today is July 17,” said Kirk Peysar, Aitkin County auditor and also the person responsible for organizing Saturday’s event. It was 50 years to the day – the capsule was buried July 17, 1971 and opened July 17, 2021.

Peysar explained that the city of Aitkin was officially recognized by the Minnesota state legislature in 1871, and thus the celebration in 1971.

About 50 people showed up for the opening, hoping to see what centennial organizers placed in the capsule and also to claim letters written on specially printed stationery.

The items in the metal capsule were wrapped in several layers of plastic to protect them from moisture. A map lined the bottom of the capsule, and newspapers – including the Aitkin Independent Age about the time of the celebration – were packed in for added protection.

“This is like history,” said Kayla Host, a second grade teacher at Rippleside Elementary, who attended with her son. “I feel a part of it.”

So did numerous others in attendance. Aitkin County Board Chairman Mark Wedel remembered that his last appearance with the Aitkin High School Marching Band was the day the capsule was buried.

“It’s a day of nostalgia here,” Wedel said. Then he added with a laugh, “We’re hoping it’s not going to be an Al Capone vault type thing.”

The jokes about what the capsule contained continued as the bolts stubbornly held the box shut, but when the capsule was opened, everyone got a chance to look at what was considered important in 1971.

First, Peysar pulled a bumper sticker from the box, while Leeann Moriarty pulled a pair of wrapped centennial plates out next.

After Peysar read the inscription on the back of the plates – which explained how Aitkin started as a logging town – the rest of the packing material was quickly removed.

The plastic-wrapped items included in the capsule included a set of clip-on ties, a guest book, books of the commemorative stock sheets that were for sale, a sweatshirt and a t-shirt that were sold for the event ... and of course, the letters that were written by Aitkin residents for inclusion in the time capsules.

Those letters were what many in the audience were waiting for. While Moriarty said that the majority of the letters would be distributed later after they were cataloged, some came and claimed their letters immediately.

Among those who picked up her family’s letters was Maxine Schroeder, who reclaimed a letter she wrote to her goddaughters and a letter from her mother to her younger sister’s children, which she intended to pass on.

“I think it’s fantastic,” Schroeder said. “I said, ‘I’m not going to be here when they open this thing up.’

“I was there with bells on, waiting,” she added.

Schroeder got notification later in the day that there were another two letters for her.

“I’m just so excited that I’ll be able to give it to one of the girls,” she said of one of the letters. “See their expressions to what I wrote.

“I’m so excited for these people to get here and see these things,” Schroeder added.

Editor’s note: Anyone who received a letter and is interested in sharing its contents, please call 218-429-4457 and leave a message.

Do you think that your smartphone is “listening” to you?