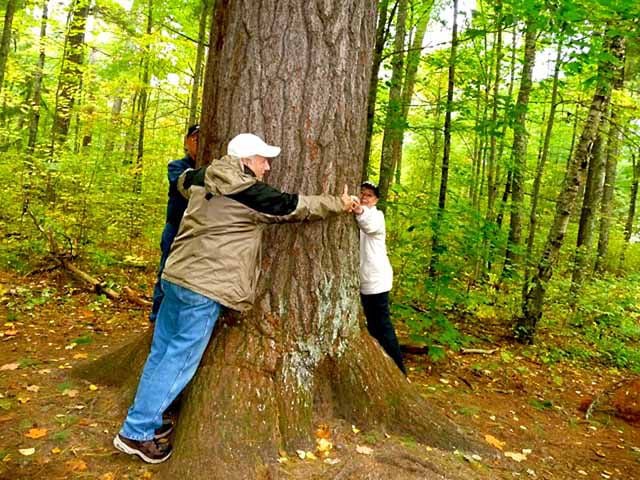 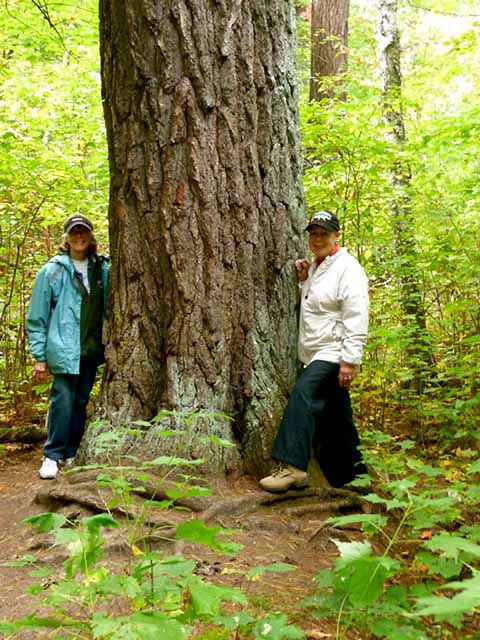 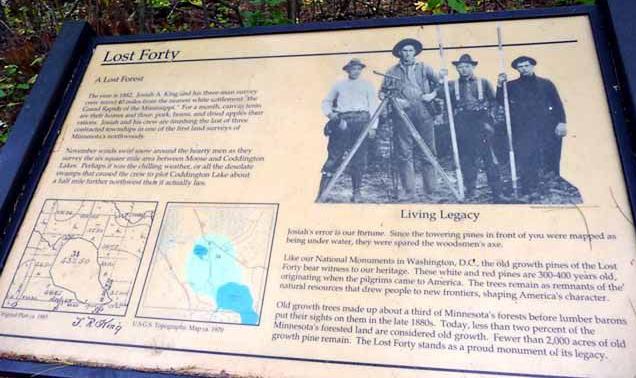 “What’ s “The Lost Forty?” and “Where is it?” were the questions I was asked when I mentioned to several friends that Betty and Steve Spigarelli along with David and I had visited The Lost Forty in mid-September.

Our visit came about after I mentioned The Lost Forty in my June column about abstracts and the logging industry. Steve asked if we’d ever been to The Lost Forty, and I replied it was as yet on our “places to see” list. Steve said he and Betty had often talked about visiting the site too. We decided then to choose a September date for the approximately two and one-half hour drive, especially to enjoy the beginning of fall color.

The Lost Forty is located in Chippewa National Forest in Itasca County and managed by the Minnesota Department of Natural Resources under its Scientific and Natural Areas Program. The area contains 30 acres of white and red pine forest and 20 acres of spruce and fir forest. It contains the most significant old-growth white and red pine stand outside of the Boundary Waters and Itasca State Park. Minnesota’s state red pine “Big Tree Champion” is found here – 120 feet tall and a circumference of 115 inches.

There are two easy self-guided trails, maintained dirt road, well-kept parking area with picnic table and vault toilet. The first quarter mile loop weaves through never-logged virgin pine; the back loop winds three-quarters of a mile along rolling hills with pine that originated after a fire at the turn of the century to the bank of Moose Brook. It was quiet and peaceful, almost reverential, to slowly wander along the well-traveled paths strewn with pine needles. With the essence of pine filling our nostrils, we walked along in awe of the majestic pines towering over us and saw the old-growth that was now providing a valuable haven for wildlife. In fascinating diversity, we found fungi in shades of red, orange, yellow and white growing on some of the trees and on the forest floor.

Most of the mature red and white pine is found on the east end of The Lost Forty with trees 350-400 years old and 22” to 48” in diameter. Biologically, pine can live up to 500 years. We stopped before several of the massive whites and felt their thick textured bark beneath our fingers. It took three of us to stretch our arms around them for photos. Standing there, we could only imagine the loggers of those bygone days and the daunting task of harvesting these pines.

In the late 1800s, Minnesota was one of the large timber producing states in the country. Moving westward, timber companies logged the northern forests of the United States, primarily Minnesota and Wisconsin. In 1882, Josiah A. King, a land surveyor, and his three-man crew traveled 40 miles from the nearest white settlement called “the Grand Rapids of the Mississippi.” In November of that year, they were finishing surveying the last of three contracted townships in one of the first land surveys of Minnesota’s north woods.

When surveying a six-mile area between Moose and Coddington Lakes, the crew became confused. It may have been the miserably cold weather or all the desolate swamps around them, but they ended up plotting Coddington Lake about a half mile farther northwest than it actually was. Because of the mapping error, the red and white pines were identified as a body of water. Appearing as swampland, the logging companies overlooked the pine in this area. Thus spared, this land became known as “The Lost Forty” and was untouched by loggers.

Though The Lost Forty is in a fairly remote area, we found the site well-marked and easily accessible. It made a nice day trip, especially with a stop for lunch at the Sportman’s Cafe in Deer River, one of the Spigarelli’s favorite small-town restaurants.

So if you’re into checking out one of Minnesota’s historic areas, put on your hiking boots and head north. Then you can say you’ve been to The Lost Forty and can cross it off your list too.