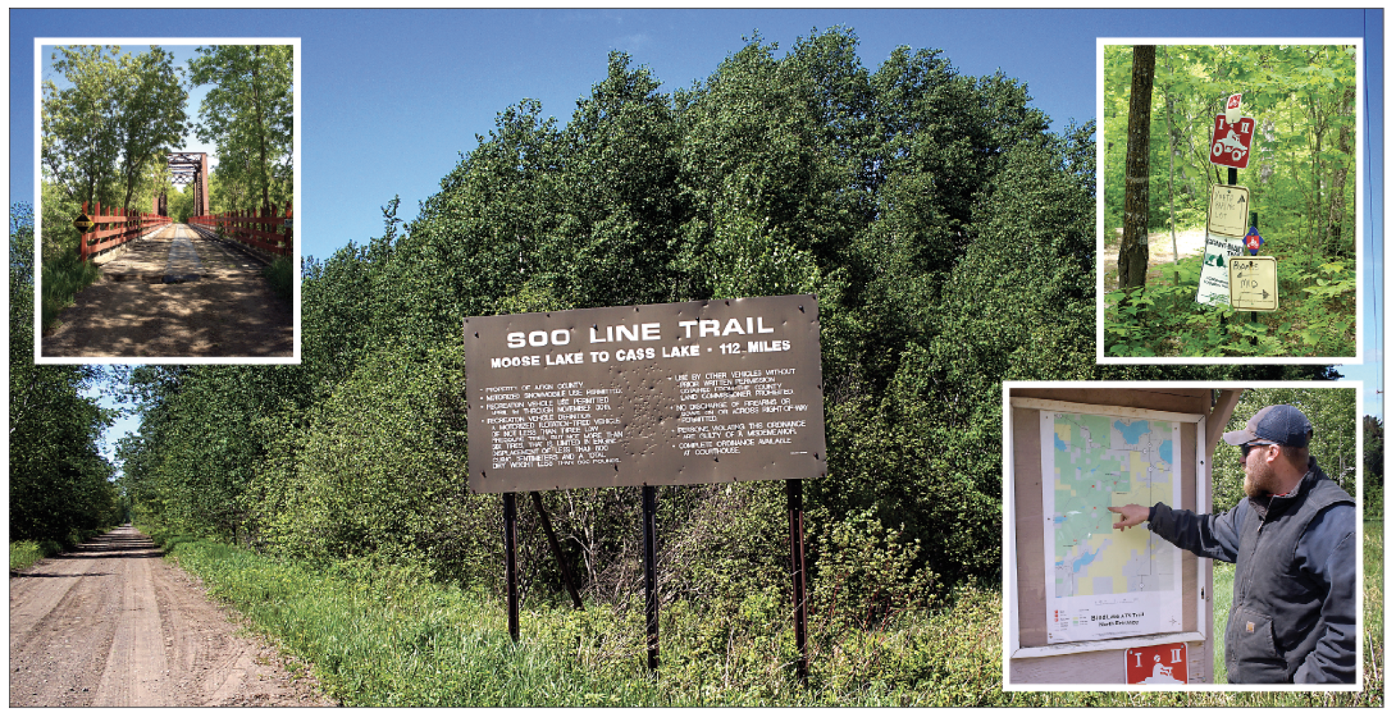 The Soo Line, an abandoned railroad line, is the backbone of the Northwoods ATV Trail system. It connects riders to gas, food, lodging and 228 miles of trail. The Land Department restored an old wood bridge that crosses the Mississippi, giving riders an incredible view of the river (inset left) and created bypasses for riders who want to get muddy (inset top right). Chris Johnson, recreation specialist at the Aitkin County Land Department, pointed out where the new Emily Connector Line will be on a map hanging from a kiosk on the Blind Lake Trail. The new line is planned to open this fall (inset bottom right). 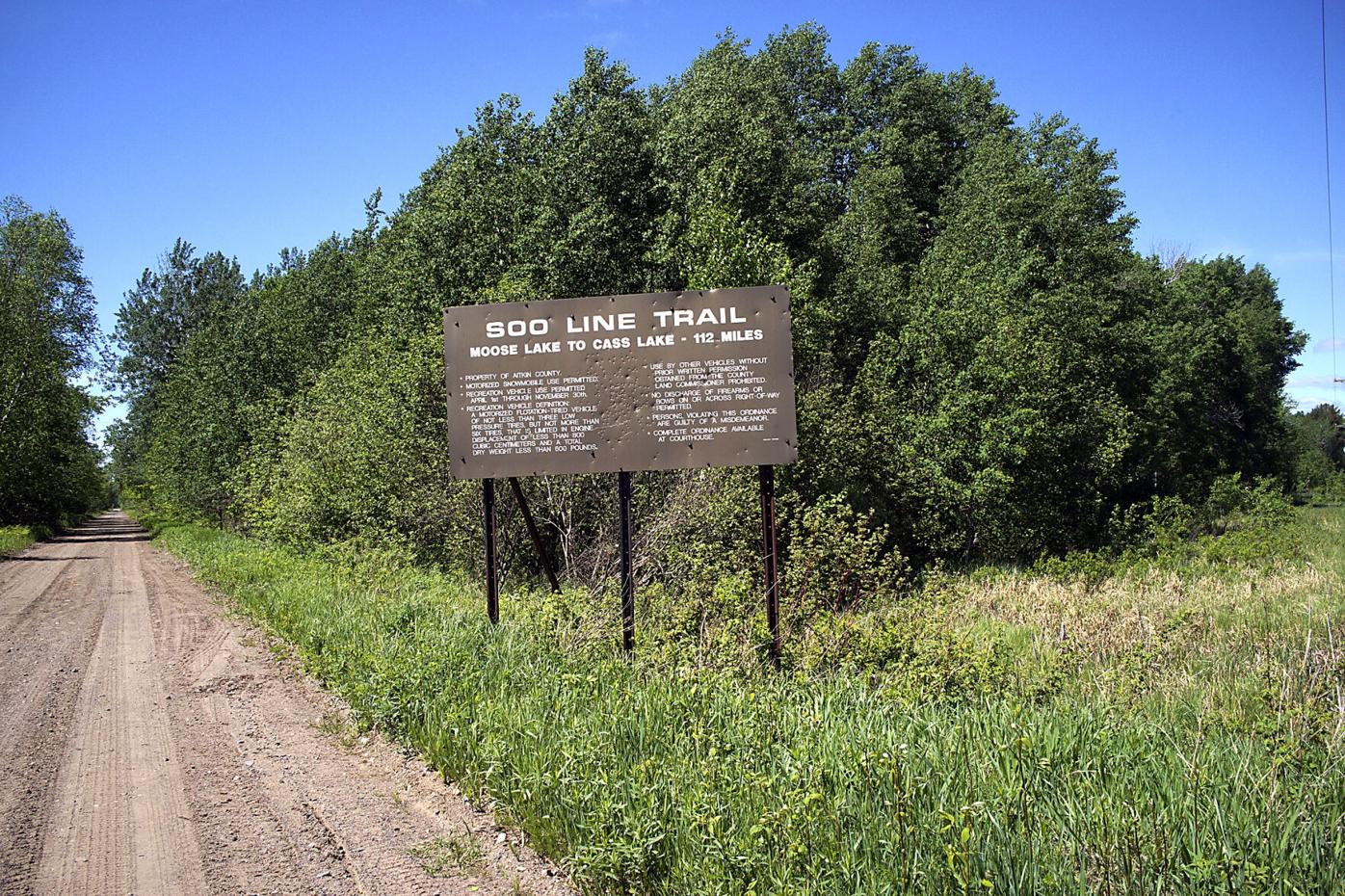 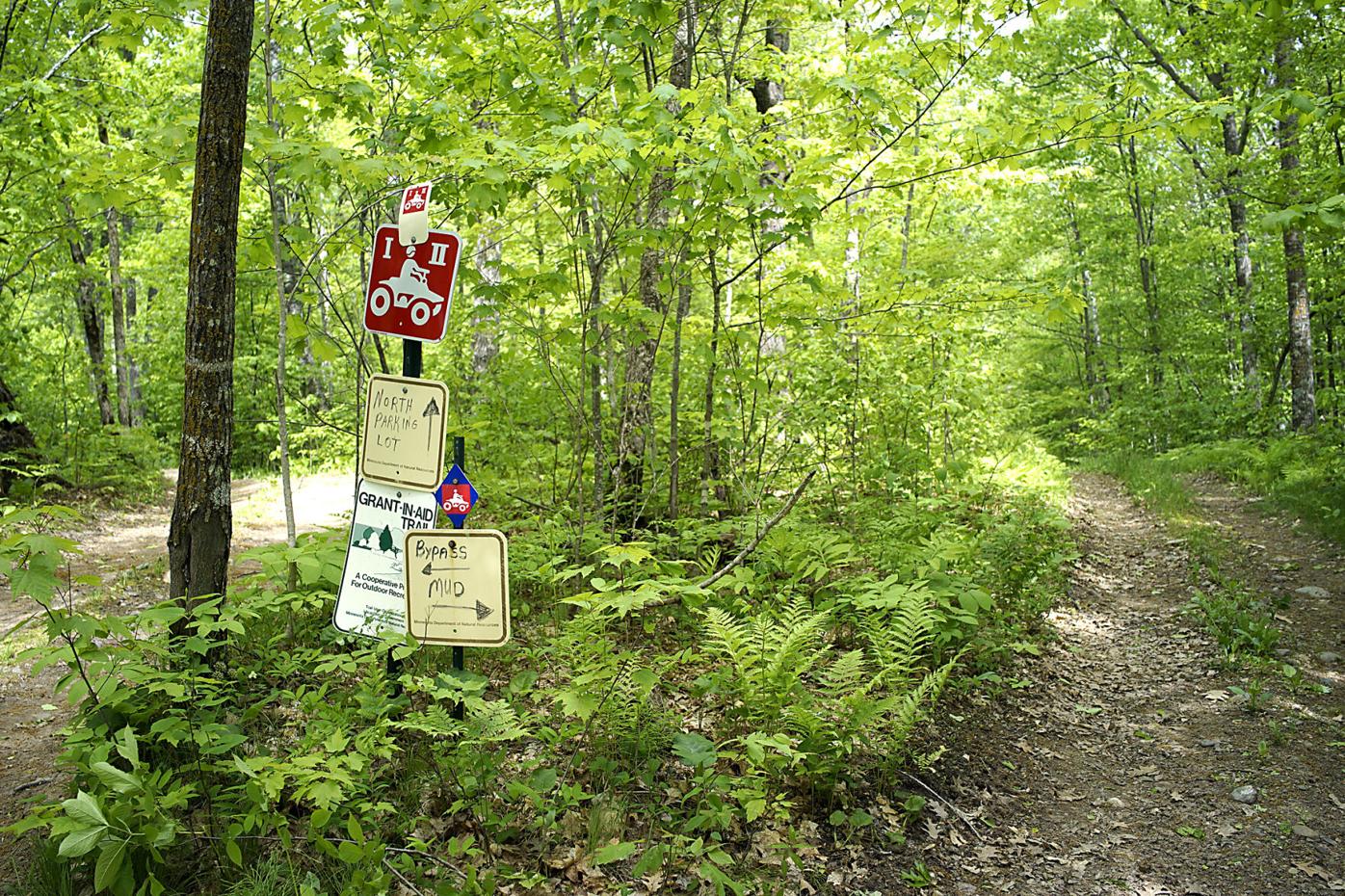 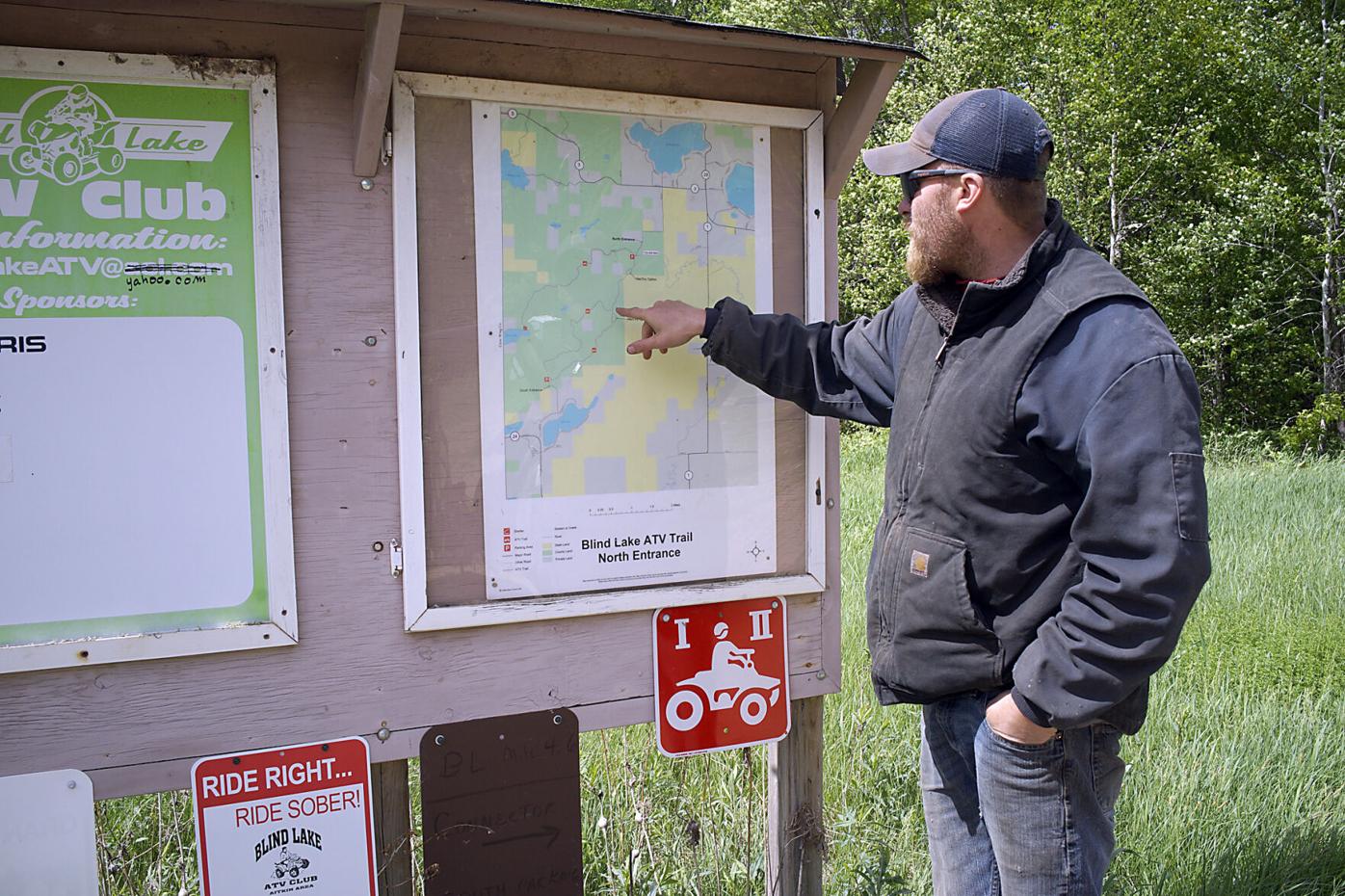 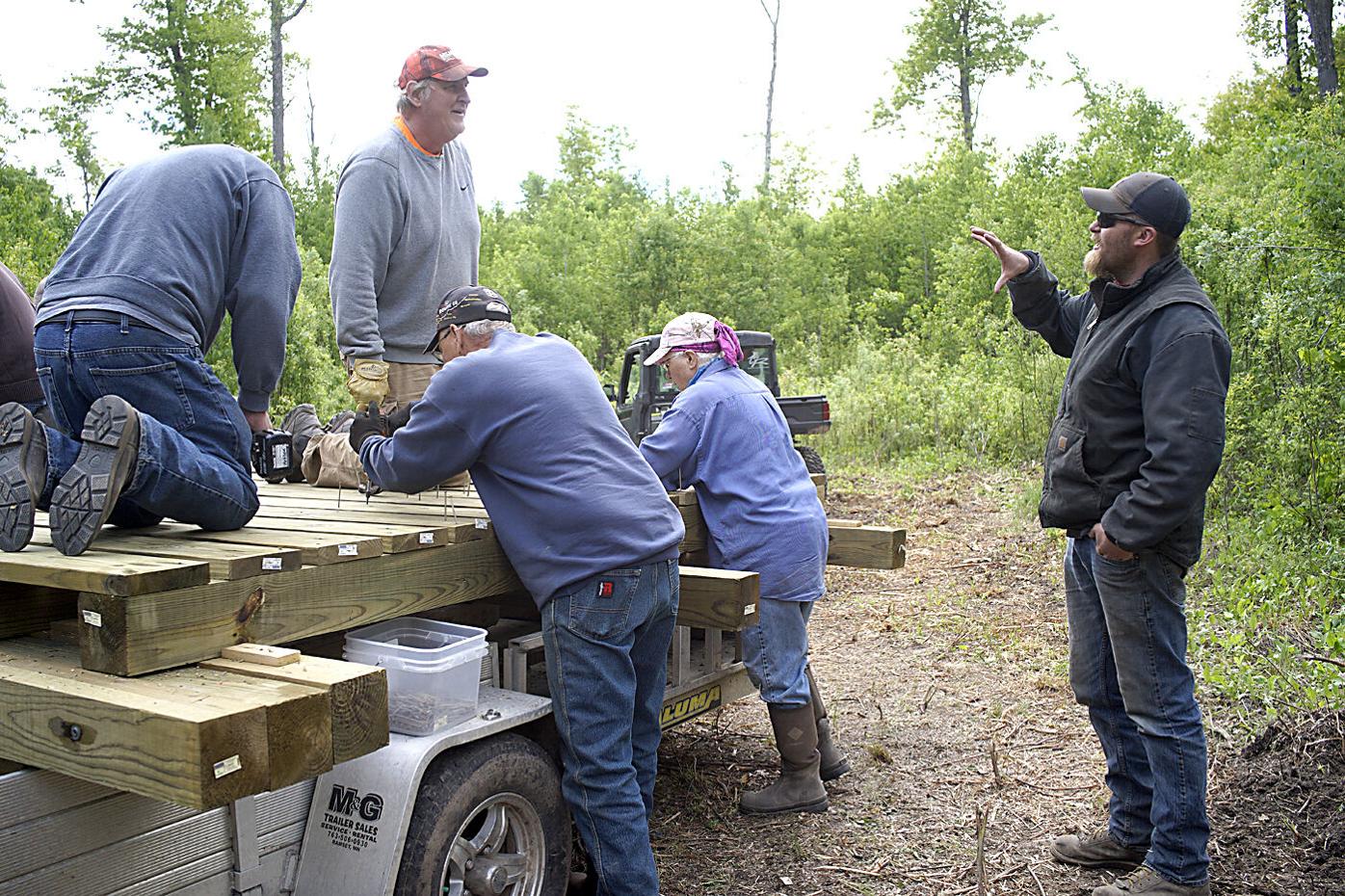 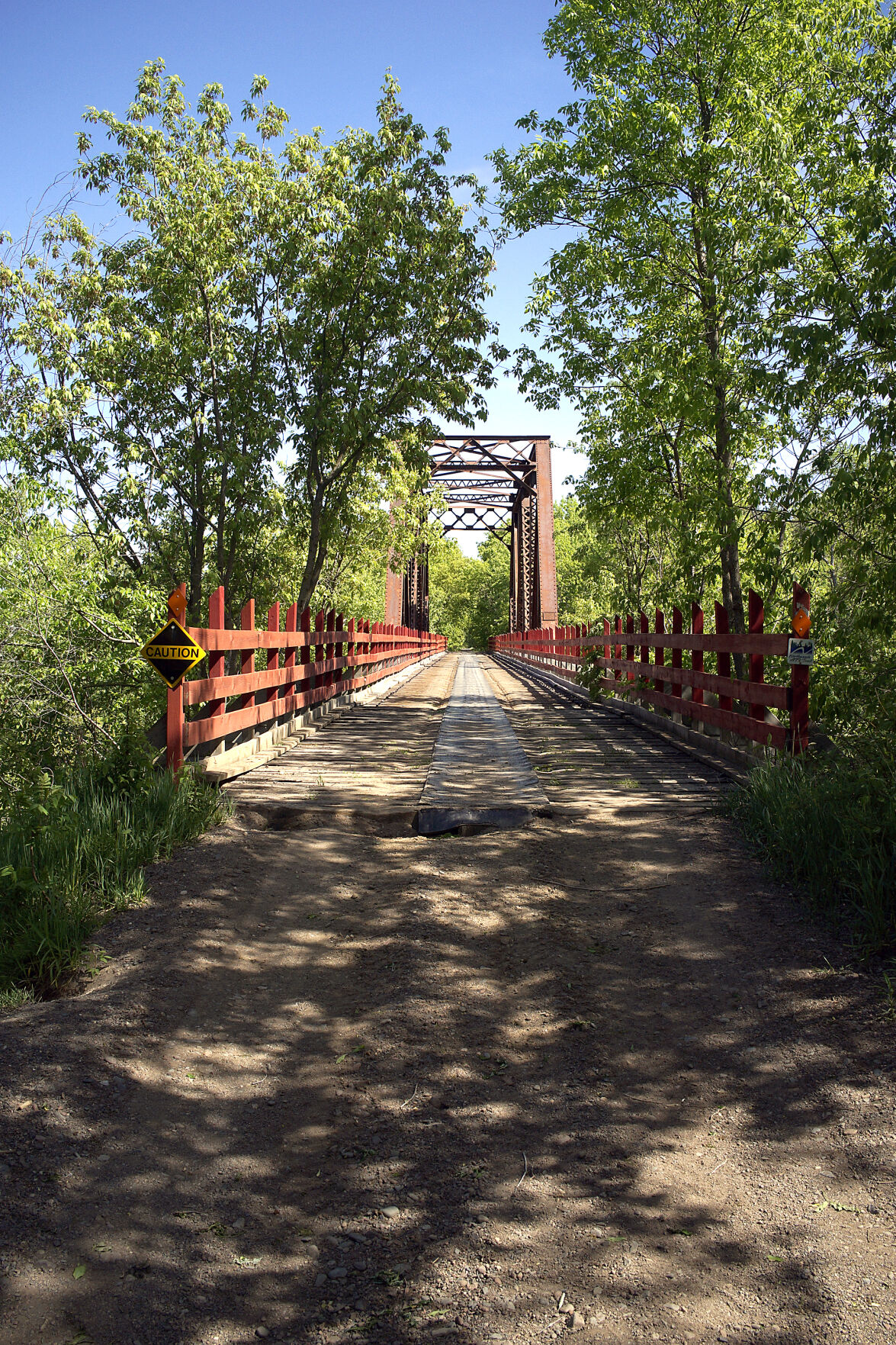 The Soo Line, an abandoned railroad line, is the backbone of the Northwoods ATV Trail system. It connects riders to gas, food, lodging and 228 miles of trail. The Land Department restored an old wood bridge that crosses the Mississippi, giving riders an incredible view of the river (inset left) and created bypasses for riders who want to get muddy (inset top right). Chris Johnson, recreation specialist at the Aitkin County Land Department, pointed out where the new Emily Connector Line will be on a map hanging from a kiosk on the Blind Lake Trail. The new line is planned to open this fall (inset bottom right).

On May 26, Chris Johnson, a recreation specialist at the Aitkin County Land Department, drove his all-terrain vehicle north on the Blind Lake ATV Trail.

He was observing trail conditions and taking note of places he needed to revisit. Johnson’s ATV weaved through the deciduous forest. At one point, he stopped at a small clearing, took out a pair of hedge trimmers and cut back the brush to reveal a giant beaver dam.

The little lakes along the Blind Lake Trail are not little lakes at all, he explained, but small bodies of water forged by beavers.

The idea for the Northwoods ATV Trail System was conceived by the Aitkin County Land Department in 2007 as a place where people can ride their 4-wheelers, 3-wheelers, dirt bikes, side by sides, UTVs, and quads – without damaging forest roads and private land.

The first allotment of funds was $1.2 million. That went towards the development of the first 70 miles of trail. Shovels hit the ground in 2010 and the first part of the trail opened a year later.

The Soo Line, a former railroad running through the county, serves as the backbone of the trail system. When on the trail, riders can stop and pick wild blueberries, hunt for agate rocks, look for mushrooms and stop to marvel at the Mississippi.

Most of the funding for trail development and maintenance comes from Minnesota’s Off-Highway Vehicle  Trails Assistance Program, more commonly known as Grant-in-Aid.

The cost-share program was first authorized in 1984 and is funded by vehicle registration, trail pass fees and a percentage of the state non-highway gas tax. Program funds can be used for all aspects of trail development and maintenance, including project administration, site planning, trail improvements and land acquisition.

“In collaboration with the county government, local clubs and trail enthusiasts can access state funds to help maintain these trails systems,” Johnson explained. “Without the Grant-in-Aid funds, the county and clubs would be forking out tons and tons of money.”

In 2019, as part of a study on trail usage, the Land Department placed seismic counters on the trails to track trail traffic. The data collected in 2019 suggested that more than 31,000 machines had used the trails that summer. Last year, the number more than doubled to 72,000.

Johnson explained that it is hard to calculate the economic impact of trail use because many variables are untraceable.

“One thing we do know is our trails are getting pounded,” Johnson said.

When asked how much it costs to maintain each mile of trail, Johnson said, “It’s so hard to put a number on it because some sections can be more than others. But I would say a realistic number would probably be like $500 a mile per year.”

Perhaps the biggest challenge for the Land Department is keeping up with technology. Every year the machines get bigger and more powerful.

“We’ve had to switch up our whole maintenance scheme,” Johnson said. “We’ve had to make the trails and bridges a little bit wider and add more reinforcing materials.”

On May 26 Perry May, president of the Over the Hills Gang ATV Club, was leading a joint effort with Aitkin County ATV Club members to finish the Emily/Blind Lake Connector which would connect Aitkin County trails with trails in Crow Wing County.

In a clearing off the new trail, the volunteers spent the day building puncheon bridges. On their Facebook page, the Over the Hills Gang ATV Club explained that puncheon bridges “were originally developed by the US Forest Service as a flotation type boardwalk over areas that are periodically wet. They are supported by treated timbers that spread the weight over soft surfaces, and will float if the area becomes wet. The bridge sections have a safe design load of 9,000 pounds, Native vegetation will grow through deck boards helping to anchor a puncheon into place.”

The Axtel Technical Riding Area is perhaps the best hidden gem of the Northwoods Trail System. Located west of McGregor, a mile and a half down the Soo Line, the 40-acre pit is designed for climbing, spinning and defying gravity.

Unlike the trails, which are reinforced with rocks and other materials, the pit is made of fine, loose sand, which is easily manipulated. Wheelers can create bowls, figure eights, mud holes and climb straight up hills.

It also has a bridge, a gravitron, a lumber crawl, a canyon crawl, a figure eight, and a reinforced mud hole, where the bottom is solidified to give the rider the feeling that they are deep in the mud hole, then all of a sudden they hit the bottom and are able to project themselves out instead of getting stuck.

“It’s more or less a place to vent for wheelers,” Johnson said. “They can get their aggression out in the pit versus out on our trails.” For the less adventurous, Axtell also has picnic areas with picnic tables, campfires and places to view the action.

Among those who have been vaccinated for COVID-19, which vaccine did you receive?