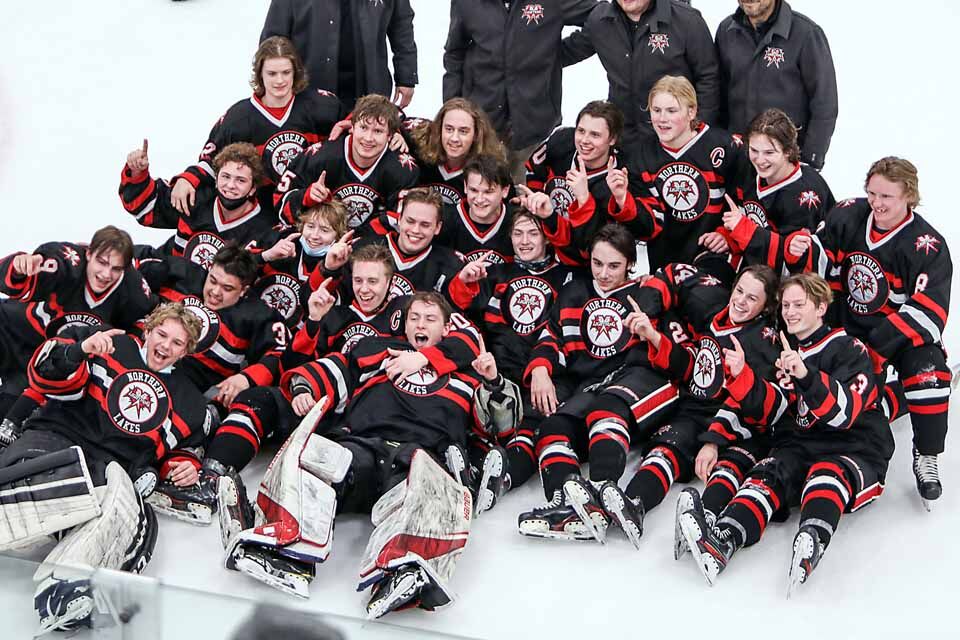 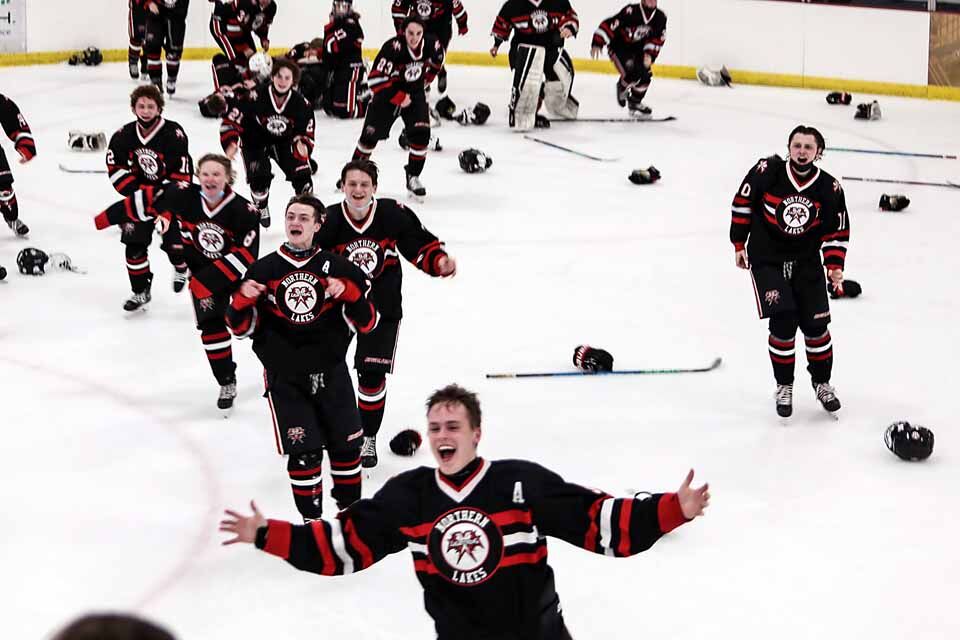 Members of the Northern Lakes Lightning hockey team celebrate March 25 after winning the MSHSL Section 5A tournament title at Monticello. The Lightning advanced for the first time to the MSHSL State Tournament, and were scheduled to play Gendry Academy in the first round Tuesday. 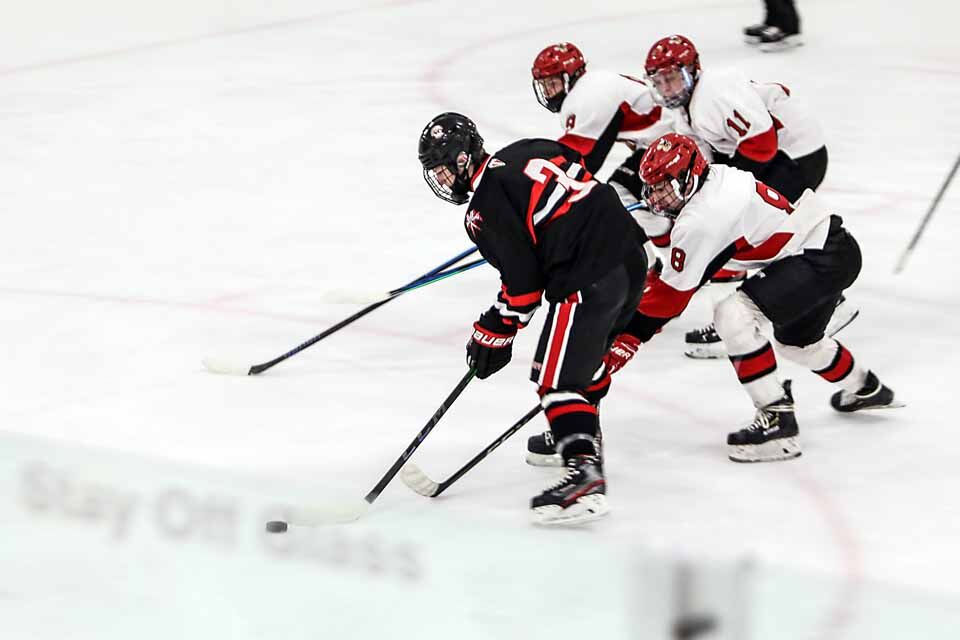 The Northern Lakes Lightning’s Jake Ince (3) brings the puck up the ice during last week’s MSHSL Section 5A championship victory for the Lightning.

Members of the Northern Lakes Lightning hockey team celebrate March 25 after winning the MSHSL Section 5A tournament title at Monticello. The Lightning advanced for the first time to the MSHSL State Tournament, and were scheduled to play Gendry Academy in the first round Tuesday.

The Northern Lakes Lightning’s Jake Ince (3) brings the puck up the ice during last week’s MSHSL Section 5A championship victory for the Lightning.

Sticks, gloves and helmets flew through the air and the dog pile ensued March 25.

The Northern Lakes Lightning celebrated their very first Section 5A hockey championship at the Moose Sherritt Arena in Monticello, downing the hosts 6-3.

The win brushed aside the Lightning loss to Monticello earlier in the month, sending the locals to the Minnesota State High School League Class A State Tournament at the Xcel Energy Center.

Northern Lakes was scheduled to face off with Gentry Academy (16-0), the No. 2 seed in the tournament.

After a loss to Monticello in the final week of the season, the Lightning went into section play as the No. 2 seed. Two victories led to them facing the top seed for the section crown – and the Lightning pulled it off. Tyler Seeling recorded a hat trick in the win as Northern Lakes moved its record to 18-3 on the season.

“I’ve played since third grade and this has always been a dream to skate out on the ice at the Xcel Center,” said senior Caiden Kjelstrom. “We were the better team and the dream has come true.”

The first period was all Lightning as they took a 1-0 lead on a power play goal by Seeling at the 11:22 mark with the assists going to Hunter Nybakken and Kjelstrom. Another Moose penalty put the Lightning on the power play just two minutes later, and Kjelstrom made them pay. He slipped out in front of the net, spun around and fired a shot to the back of the net and a 2-0 lead.

Kjelstrom knew how important scoring first was to his team.

“It took some of the pressure off our guys and kept us loose,” he said.

“I can’t stress how important that is,” he said. “It helps establish our fore-checking, it puts us in control and pressure on the opponent. In the first period, they were good but we took over and once we scored I knew we could stay there.”

Monticello scored the only goal of a defense-filled second period, a power play tally by Gunnar Sibley at 4:17 with Seeling off for tripping. That closed the gap to 2-1 going into the third.

Lightning defenseman Owen Miller knew they could put a clamp on the Moose.

“We thought we were the better team last time we played them so we didn’t change much in our game plan,” Miller said. “We knew if we kept the puck away from them we would be OK.”

Miller added that when the teams met the first time, the Lightning had played three games in five days.

In the third period, defense took a brief rest, as the two teams combined for six goals in the final 14 minutes.

As he raced down the ice weaving through the defense and scooting in on goal, Couture slipped the puck into the net for a 5-2 advantage.

The Moose weren’t done, getting their final goal at 15:42 from Gavin Brooks before Seeling scored into an empty net, his 15th of the year to finish things off and getting the celebration underway.

“We wear teams down, depth is so important,” Larson said. “We made adjustments to our game and they didn’t adjust to us, that’s the way we like it. I waited for them to do so but they never did and we stayed in control.”

Adler Hoagland had a strong night in goal, stopping 30 of 33 shots to move his season record to 14-2 while the Lightning put 26 shots on net with Nash Wilson stopping 21 of them.

Senior Owen Miller – “These guys are special and everybody has contributed to getting to the state tournament. We set the tone early and we knew we could do it.”

Senior Jake Ince – “Gosh, I don’t know if I can describe how it felt to race out on the ice when the game ended. It’s kinda surreal but I know it was really exciting. I’ve been up and down during the season, second line and third line but I’ve been able to contribute and that makes it great for me.”

Senior Jeremiah Smythe – “I’m not really surprised, it’s been a great year and the defense always made things easier on Adler and myself by keeping the puck on the outside, away from the slot area and limiting scoring chances. I couldn’t ask for a better way to end my senior season.” (Side note, Smythe was 4-1 on the season as the backup goalie)

Sophomore Zach Ehnstrom – “I was surprised a little by how much I was able to play this season, especially in the beginning of the year. I didn’t know many of the seniors but I got involved and was able to contribute and that helped my confidence.”