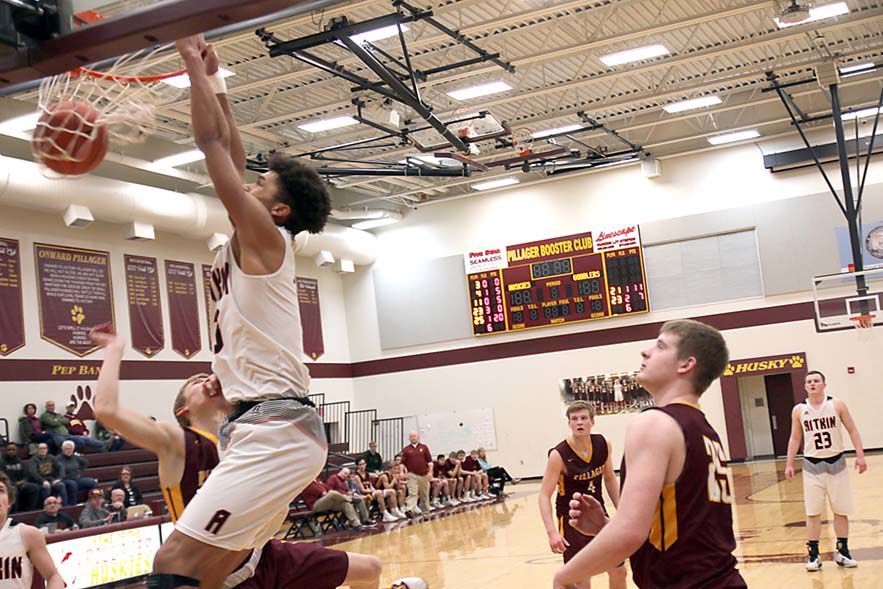 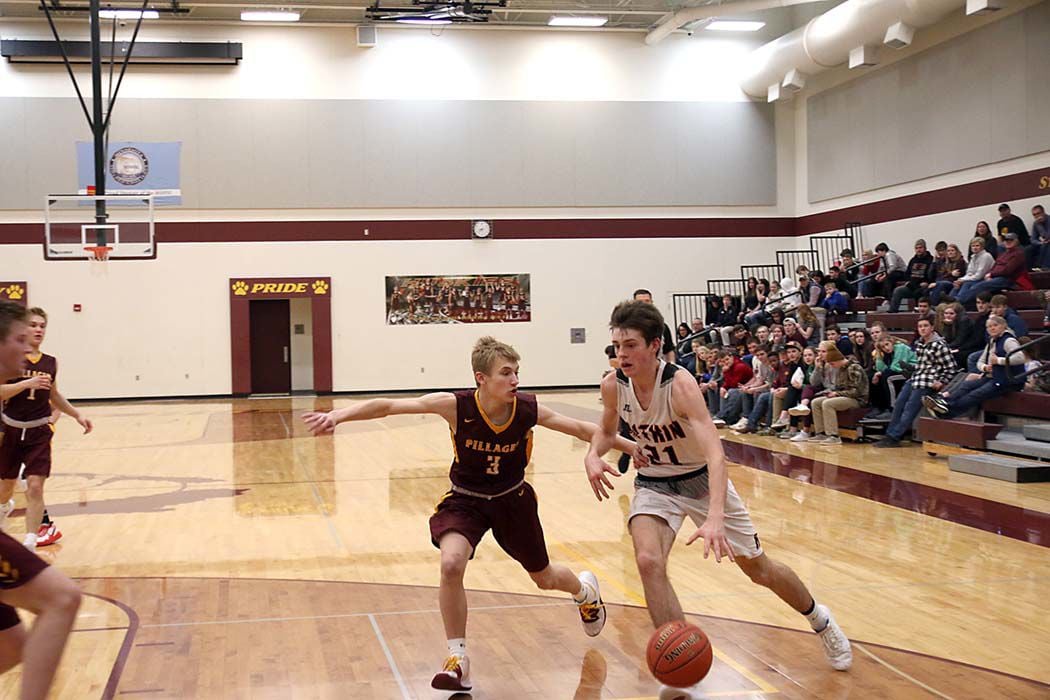 Kade Hopperstad knocked down a 3-point basket at the buzzer, sending the game to overtime at Pillager, Feb.4.

The Aitkin Gobblers, playing some of their best basketball of the season, won both games at the Virginia Tournament last weekend. On Friday, the Gobblers thumped International Falls 62-37 and on Saturday defeated the 16th ranked Virginia Blue Devils, 68-63.

Saturday afternoon’s championship game against the tournament host, Virginia Blue Devils, was a barn burner. It appeared that the Gobblers would have it easy as they jumped out to a 12-0 lead; Kade Hopperstad scored the first 9 points of the game and Logan Gabrio tossed in a trey before the home team got on the scoreboard to engage in battle, knotting the score at 21 at the five-minute mark of the opening period. A duece by Manni Ukutegbe, a bomb by Hunter Nissen and Hopperstad’s drive for 2 sent the teams to the locker room tied at 28. The Gobblers dominated the boards during the first 18 minutes, 19-9, but lost in the turnover department 10-5.

Nissen scored Aitkin’s first 8 points of the second half, but Virginia held the lead, 37-36 until Hopperstad caught on fire; the senior knocked down three straight from beyond the arc, and the Gobblers regained the lead. Jon Blanchette added a goal and Hopperstad a pair of free throws, building a 9-point Aitkin margin not to be relinquished.

The Blue Devils narrowed Aitkin’s lead to 66-63 with 20 seconds remaining, but free throws by Gabrio and Nissen salted the victory away.

“Virginia double and triple teamed Manni (Ukutegbe) which opened up our perimeter game; fortunately, Kade (Hopperstad) and Hunter (Nissen) were able to take advantage of open looks at the basket.” said coach Kerry Hopperstad. “Defensively, we played great out of zone defenses, we allowed the Blue Devils 3-point shots but kept them out of the paint. It was almost always one-and-done with outstanding rebounding.”

GOBBLERS GET FAST START OVER I’FALLS

Manni Ukutegbe dominated the paint in the first half against International Falls, tossing in 18 points while grabbing 14 rebounds as the Gobblers raced to a 40-17 lead at intermission.

“We just pounded the ball inside to Manni, and he was able to finish,” said coach Kerry Hopperstad. “Our defense was stingy and we controlled the boards, allowing them only one shot each possession.”

When the Gobblers played at Pillager on Feb. 4, the game was an uphill battle all night. After leading 11-8, seven minutes into the game on 6 points from Manni Ukutegbe and 5 from Hunter Nissen, foul trouble began taking its toll. Ukutegbe went to the bench with a pair of fouls, and the Huskies rallied to a 31-24 lead at intermission.

In the opening moments of the second half, Hopperstad nailed a three and Ukutegbe kissed one off the glass, narrowing the Husky margin to 2 points. However, Pillager answered with 9 in a row before Owen Hagen scored 8 straight for the Gobblers, Pillager 42, Aitkin 38.

Nissen’s duece at the 3:53 mark put Aitkin up 48-46. From that point there were four ties-the final tie came on a Hopperstad 3-point basket at the buzzer, sending the game to overtime.

The Gobblers played the extra four minutes without Ukutegbe and point guard Logan Gabrio who both fouled out in regulation. Aitkin’s defense could not keep the Huskies 6’5” center, Spencer Schaefer, out of the paint as the Huskies rolled to the 74-65 win.

During the overtime, the Huskies were rewarded with 11 charity tosses, connecting on 9. For the game, Pillager shot 35 free throws to 14 for the visitors.

Aitkin’s junior varsity completed the sweep at the Virginia tourney with a pair of wins last weekend. On Friday, the JV dominated International Falls 71-27 and, on Saturday, Virginia 54-44.