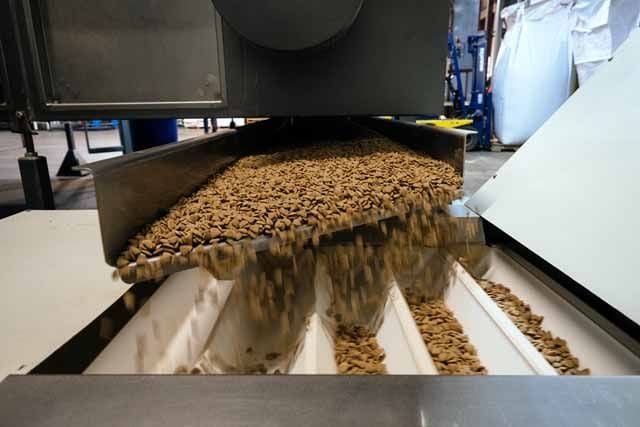 The extruder makes different sizes and shapes of pet food and treats for animals from mice to bears, and even crickets which are raised as prospective food for reptiles. 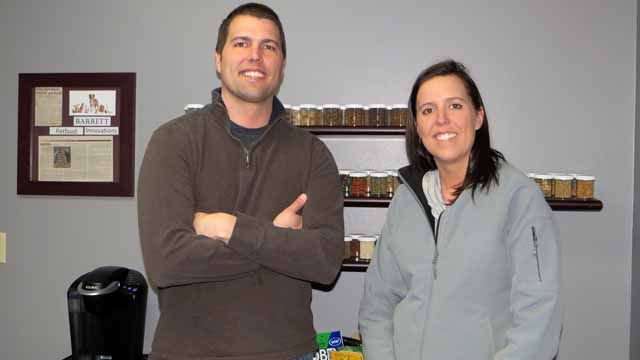 The extruder makes different sizes and shapes of pet food and treats for animals from mice to bears, and even crickets which are raised as prospective food for reptiles.

Driving down the back roads near Pine Center, who would think they would see a large, multi-national company that employs about 30 people year round? That is exactly what you find along Hwy. 25 among the fields and hills of central Minnesota.

Barrett Petfood Innovations manufactures pet food on a grand scale in the rural setting. In addition to common pets, dogs and cats, they make food for birds, rats, hamsters, lizards, bearded dragons, crickets and even zoo animals – monkeys and bears. The brother and sister team of Tom and Sarah Barrett are VP of business development and purchasing and operation and quality control respectively.

Their father, Mike, started the business while Tom and Sarah were off at college. Mike is an entrepreneur. He had an ag retail business which closed in 2000. His friends gave him the idea to purchase an extruder which is used to make the animal food.

Though he is an entrepreneur, Mike is a farmer at heart. Mother, Bunny, is a nurse and chooses to practice her calling in Brainerd. They are all partners in the business, but Tom and Sarah took over running the manufacturing of pet food after college and the rest is history.

Sarah began working in the family business in 2006. Mars (the candy company) and Nestle are the two biggest pet food companies in the world. The Barretts are small in comparison, but they are a successful company that trades on the world stage. The pet food they make is sold under their customers’ trade names, not Barretts’.

The extruder they use came from Norway, some of the controls on the computer are still in Norwegian. There are only a few of these machines in this country. It is a twin screw extruder that allows them to manufacture many shapes and sizes of food products as well as add meat to some of the food.

“Reptiles and birds require a lot of maintenence,” Tom said. They need a good supplement. Birds are very sensitive to color so their food has to be attractive to them. They make rat food that has a lot of cheese in it. And they make cricket food. People need crickets to feed their reptiles. The crickets need to grow so the insects get big enough for reptile food. Barrett makes about 150 different types of pet food, snacks and supplements all together.

The company does research for its customers. The customers will give them a concept of what they want and the Barretts will make a trial batch to comply with the requested end product. one such product is a treat that would prevent a dog’s tears from staining the fur around the eyes. The product is sent to a lab for study. They may make changes to the ingredients if the end result isn’t exactly what they want. Some customers want a grain-free product and some just want to upgrade their older brands.

The monkey nuggets they make are a supplement to the regular food, such as bananas, fed to the monkeys in the zoo. The product is shipped all over the world. The bear food they make is designed for omnivores.

Pet food is regulated like human food. Barrett’s manufacturing plant is inspected by the FDA through the USDA. They have to keep everything up to code. The equipment is scrubbed after each use, and last year they built a building that functions as an alley between the production of the pet food from the extruder to where individual packages are filled. They needed the building to keep birds from flying over the product and possibly contaminating it.

They also added a meat ingredient to the business and that was the beginning of the high end super premium dog food. They buy fresh meat and cook it on site for the animal food. They only use chicken, turkey and lamb – no beef products. They make every effort to purchase their ingredients locally to lessen their carbon footprint. They get chicken from Gold’n Plump in St. Cloud, and they try to purchase locally grown wheat, corn, oats and other grains they need from their neighbors. Last year, the Barretts needed garbanzo beans, so they experimented with that crop. Sarah said garbanzo beans are not usually grown in this area. They ran into a few problems, but were able to solve the issues and last fall, Sarah and her mother harvested the crop. Sarah said she hopes some of their neighbors will start planting the beans this year.

Sarah traveled to Germany recently to network with potential customers. The United States has a poor trade agreement with the European Union. They can’t ship directly to their EU customers and vice versa. They have to go through a company in England which acts as the go between.

In 2006, the Barretts had three other employees beside themselves. This year they have 30 employees. One employee’s commute is 30 miles, but most live within five or 10 minutes of work.

The business has been growing almost 200 percent per year. That means they have to upgrade their equipment to increase their capacity. “We needed to catch up with ourselves,” Sarah said.

They will make 50 percent more product this year.

The Barretts support the local economy while contributing to the GNP with their exports.

They will receive the Governors International Trade Award later this spring.