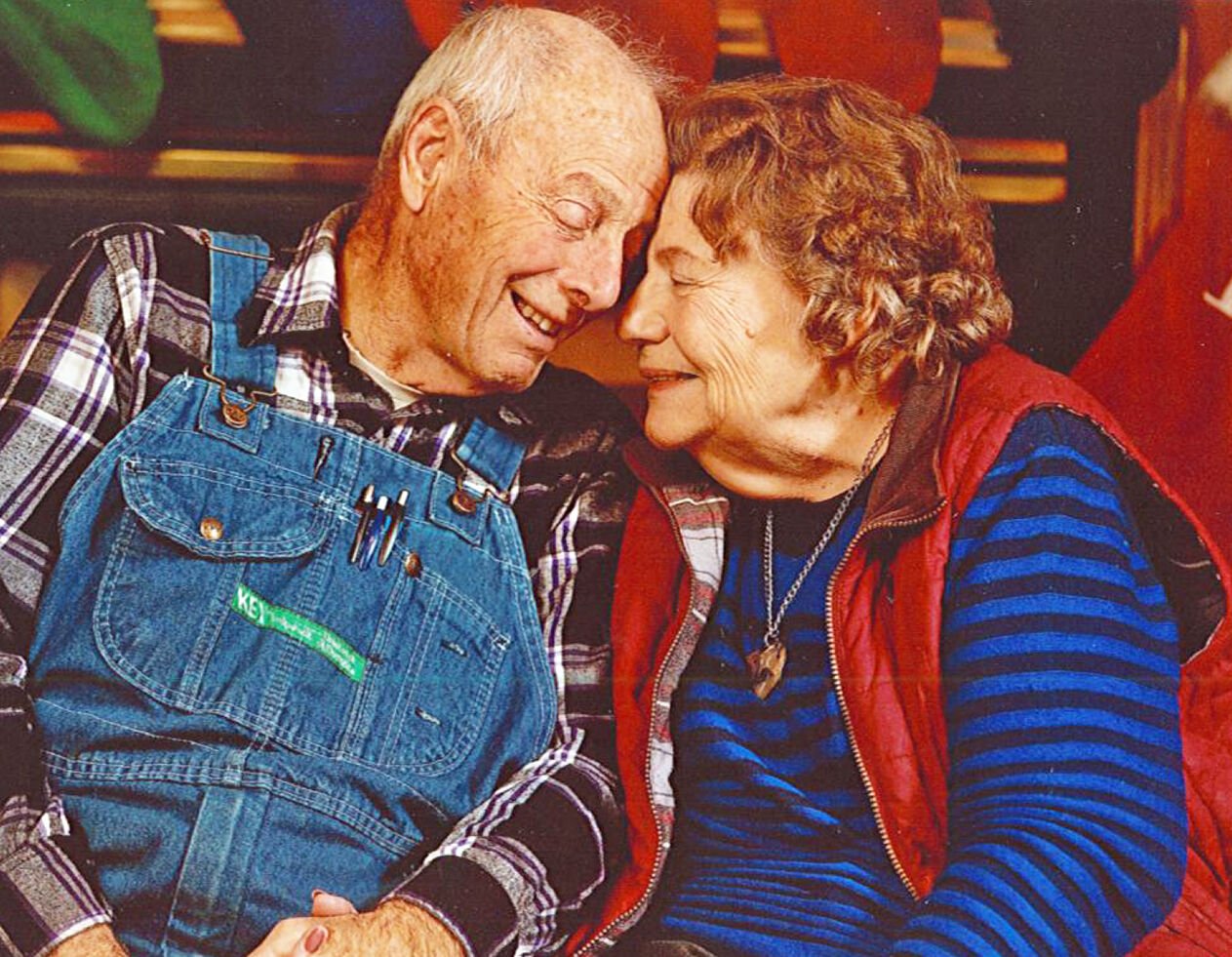 Wally and Carol Tramm have had a loving relationship dating back to the ’50s, as their 69th anniversary, and 75 years together, will be in the coming year. “And I love her more every day,” Wally noted. 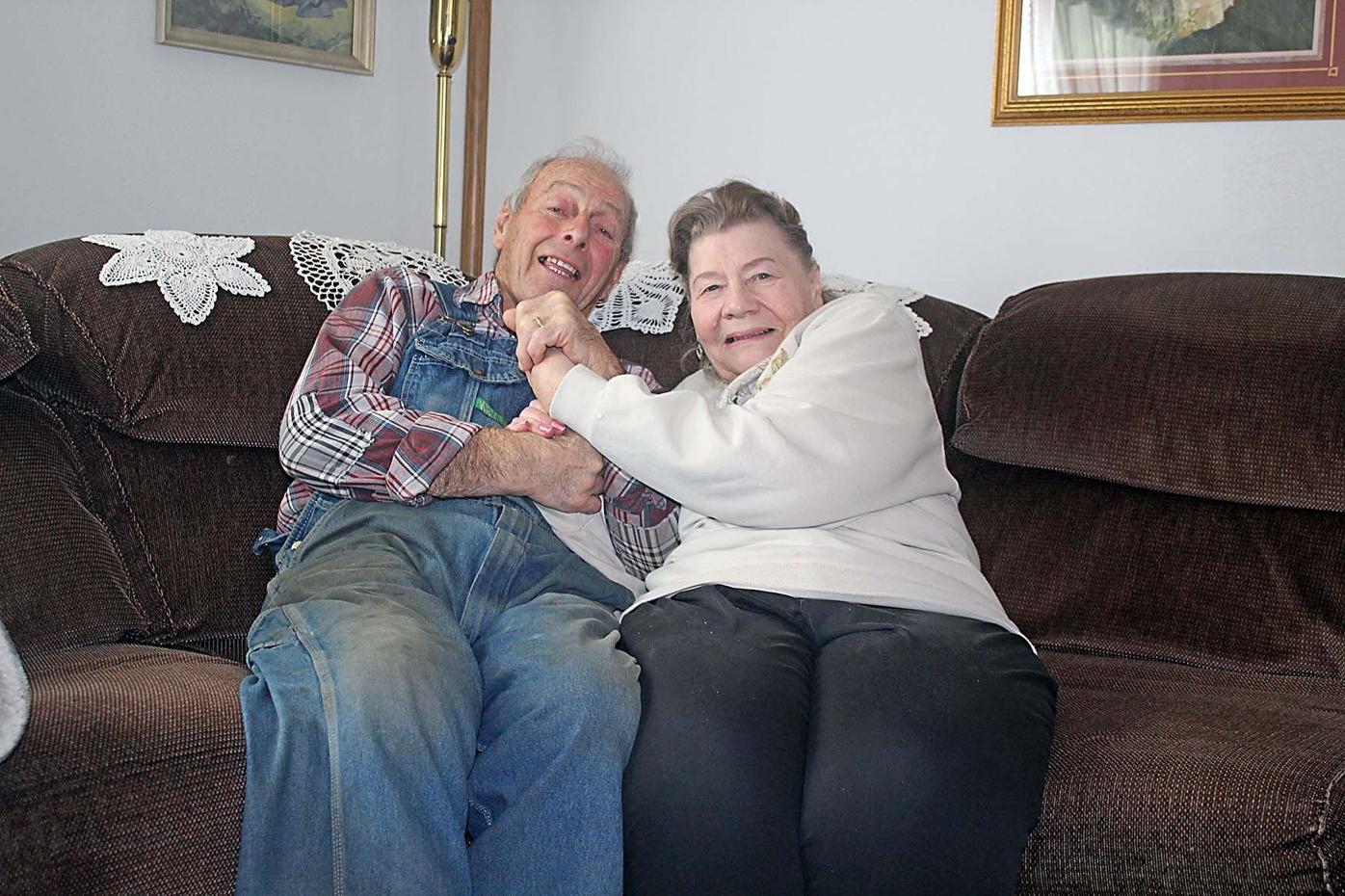 Wally and Carole Tramm at their home in Isle.

Wally and Carol Tramm have had a loving relationship dating back to the ’50s, as their 69th anniversary, and 75 years together, will be in the coming year. “And I love her more every day,” Wally noted.

Wally and Carole Tramm at their home in Isle.

Feb. 14, Valentine’s Day, is the annual celebration of love and romance. While the fires of that romance are often lit in youth, a special sort of relationship can last and weather through the decades. Wally and Carol Tramm know a thing or two about decades of love; they will be celebrating their 69th anniversary this September. With all those years, the Tramms have shared the friendship, family and faith that have guided them, through marriage and before, across 75 Valentine’s Days.

While Wally Tramm had been born and raised in the Isle area, Carol did not come to the community until she was in sixth grade, moving to the area from Pine City. Wally’s sister had been Carol’s classmate at the time, and eventually, the two met through her. “The good Lord brought her here to me,” Wally said. “I was looking for a wonderful wife, and he brought her here.”

The two formed a fast friendship during the years leading up to Carol’s graduation. They attended a Bible study together, and, for fun, she and Wally would go out roller skating at rinks around the community, which she described as their first dates. Wally indicated they went to the rink in town, in Onamia, and up by Malmo. “There was a different one for every night of the week,” he said with a laugh.

“We couldn’t go to them all,” Carol added, “but we tried. That’s what our fun was; that’s what we liked.”

At the start of the following year, several months after the Tramms’ marriage, Wally was called to service and joined in the military. He would spend 16 months serving in Korea. When asked if their relationship had faced any sort of difficulty or hardship, Carole replied, “Just being apart while he was in the service.”

“Not a day passed that I didn’t write a letter to her,” Wally said, and Carole added she was equally dedicated in her responses. “We numbered them,” she laughed. Wally figured that they had a letter for every day of the 16-month period. “When he finally came home,” Carole said, “That was wonderful.”

Following Wally’s return from service, the pair moved from Carole’s family home, near the Trinity Lutheran Church in town, to a new property across from the school. Initially, they rented from Carole’s great-uncle, who eventually offered to sell it to them at a discount of the rent they’d already paid. All four of their children, Roger, Diana, Ross, and ShadiAnn, would be born while they lived at that property, Carol added.

Out of high school, while Wally went into the service, Carole began working for a time as a proofreader for the Mille Lacs Messenger. She also worked for the school for a period, as an office worker for the superintendent. Eventually, her former geography teacher, then the Isle postmaster, would offer her a job at the post office, and she qualified to become a clerk working for him. Eventually, when the postmaster retired, Carole was promoted to fill the position. She held the position up until the post office began to upgrade to a new electronic system. Carole was given the opportunity to retire two years early with the benefits of a full retirement.

As for Wally’s own career, Carole’s dad had been a trucker, hauling cattle to the Twin Cities for area farmers. Wally began working with him as a driver. “I worked for her,” he joked. Wally also began working for an electrician in the Isle community, Forrest Bergquist, and eventually got his own license as an electrician to run his business, Tramm’s Electric, for a time. Wally said he was an electrician for 60 years up until his retirement, as well as being a farmer.

Once their children had finished school and moved from home, Wally became interested in expanding his herd of Hereford cattle, and the Tramms then moved out to the property they farmed south of town. “And now we’ve both retired,” Carole said, “and we’ve enjoyed this place with our four kids, 12 grandchildren, and 15 great-grandchildren.”

Carole observed that she and Wally are fortunate that all four of their children have stayed in the local area, and many of their grandchildren are still nearby within the state. She reflected that it was key for a family to stick close together and pay attention to one another. The family, the children and their spouses, keep a regular tradition of meeting up for Sunday night meals. On Tuesdays, Wally added, his remaining six and brothers and sisters gather together as well.

Now that the two are both retired, Carole said they have found more opportunities to be conscious of each other, compared to the busier days when they’d both been working. She added that though she now walks with a cane, whenever she heads out the door, Wally is always there beside her, hand on her shoulder. The two always leave the house side-by-side.

Reflecting on another tradition her husband has established to support her, Carole pointed to Wally making her breakfast every morning since the ’70s. The tradition began while the Tramms took care of Carole’s mother during her later years. “We didn’t know what time to make breakfast. He was always out doing the farm work in the morning,” she said.

Wally added, teasingly, “The biggest reason I make breakfast is she hates to get up in the morning. If I waited for her to get up, it would be around noon!” To make sure the meal was happening at a consistent time, Wally decided he would make it for his wife and mother-in-law. “And he’s never missed a day,” Carole said. “... He’s very faithful, but that’s what a farmer does. He knows how to tend the plants that grow.”

The two share their responsibilities. While Wally regularly works around the farm, it’s Carole’s job to go out and mow the lawn. Outside of breakfast, Carole is the member of the household regularly cooking. “We work together,” she added.

When asked what the foundation was that underlied the couple’s nearly 70-year-long, happy marriage, Carole merely gestured upwards, literally to the heavens. “For one thing,” Wally said, “... when I started going with her, she was a born-again Christian girl. I’d gone to church all my life. I hadn’t really accepted the Lord yet until we got married. And then I did.” The two both agreed that their shared faith had brought them closer together.

Where their faith was concerned, Carole said that her family was blessed and fortunate. As one example of providence, she said that members of the Tramm family have rarely been sick, and they have been able to get care when it was needed, noting that one member of the family had a pacemaker to help with heart problems and that Wally had had open-heart surgery. “Even then, the doctors and the nurses had trouble keeping him in bed for long,” she added.

Much as they share their faith, music is also a key component of that shared faith. Carole plays piano for her church every Sunday, and the Tramms have a long history of singing duets together through their church. They have also lent their music to funerals and some community events. Carole traced the roots of the tradition back to their individual families. Wally had a large family that regularly sang together, and when her own parents would play guitar and sing, Carole sat between them and held the book of music. “When it’s in you, it’s in you,” Carole said, of their music, “and you’ve got to use it.”

Carole reflected on the serendipity of her family moving to the Isle area, and how circumstance had brought the two families together in the community, and she contributed it to an act of God. “If the Lord hadn’t brought us here, there’d be no way for a couple of kids to get together, and you might as well say it: we were kids … It all just fit together like a magic puzzle.”

Wally reflected further on his belief that God had brought him and Carole together. He noted that his mother had encouraged him to pray that God bring someone to him. “So I did,” he said, “Off and on. I asked him to find me a wife, and he surely did. He knew a girl in Pine City that would be perfect for me.”