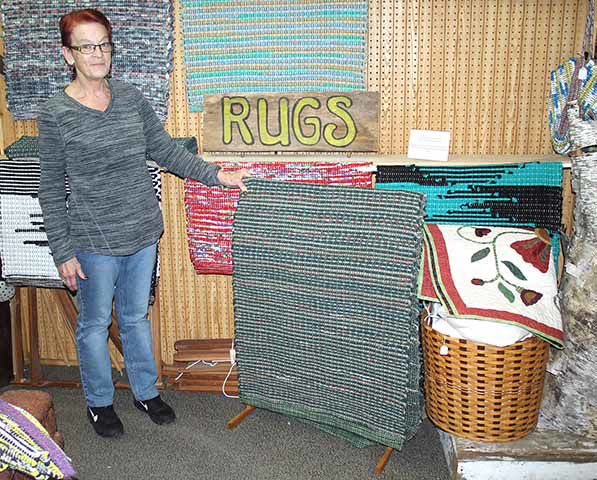 Terri Sandin has created numerous rugs since she returned to working at the Someday Isle store four years ago. The back display of the store shows many examples of her work. 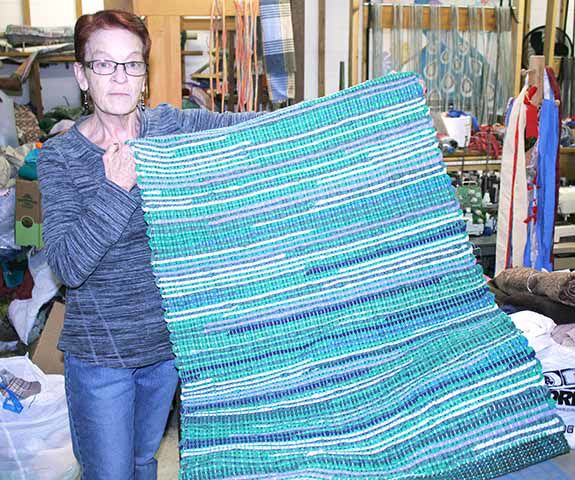 She has also worked with a variety of materials, including weaving a rug from old Girl Scout uniforms. 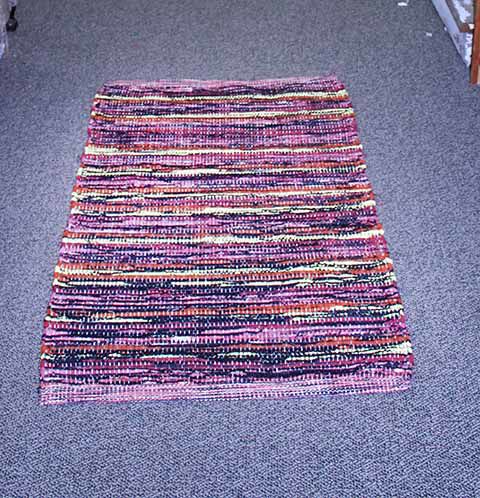 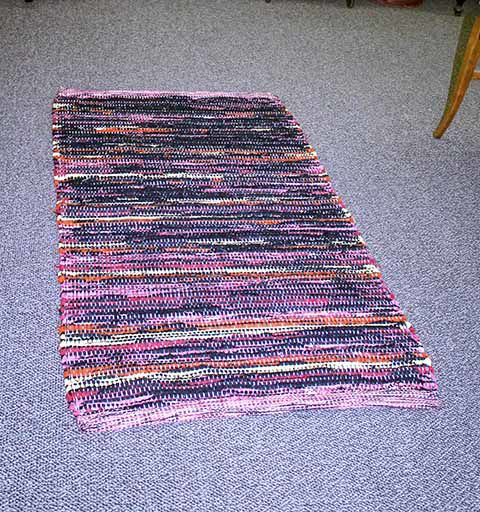 Terri Sandin has created numerous rugs since she returned to working at the Someday Isle store four years ago. The back display of the store shows many examples of her work.

She has also worked with a variety of materials, including weaving a rug from old Girl Scout uniforms.

Terri Sandin has one rule when it comes to selling her rugs. “You have to tell me you’re going to walk on it,” she explained. Sandin hadn’t intended to weave rugs, but when circumstances led her to work at the Someday Isle craft store, along Isle’s Main Street, she soon found herself behind the loom. Sandin spoke on the vision that goes into each of her colorful creations and how rug making drew her back to artistic expression.

‘Gone in a minute’

Before she started working with Someday Isle, Sandin said she had never had any prior desire to weave. When she was younger, her home had relied on wood for its heat, and she would go out into the woods to gather wood. When she found interesting tree stumps, she’d cut off a slab and made a hobby out of wood burning designs into them. “I had a friend who was a big horse lover,” she said, “... so I did a great big horseshoe on one with a horse in the middle, and I made it into a clock.” She also did a portrait of another friend’s Labrador retriever.

“You name it,” Sandin added, “and I used to do it: I crocheted and made jewelry, but the biggest thing I did was the wood burning.” What brought an end to her artistic hobbies, she recalled, was losing her house to a fire and her work with it. “I was very poor,” she said, “and everything I had was treasured. I couldn’t bring myself to invest in it again, when it could all be gone in a minute.”

Sandin’s mental block would keep her from coming back to art until her work with Someday Isle began. “I was all sad and blue, down and out,” she said, “and I became a member of the Jobs and Training program that worked with seniors.” Through this federal program, Sandin started a brief stint at Someday Isle six years ago and then, as the program required her to change locations every few months, she worked for a time through a school program. Though she recalled eventually coming to love her work with the school and would have stayed with the program there if she been able, eventually, a lack of funding led to her no longer being paid, and she ended up returning to the Someday Isle store, which led directly to her discovering a new passion: quiltwork.

A start at the loom

At the time Sandin returned to Someday Isle, around four years ago, her grandson had been coming to the store with her. The store owner, Angie Moen, had asked Sandin’s grandson if he’d like to learn to weave. He agreed, and the two began to work at the loom. However, illness had impacted the grandson’s ability to operate the loom’s pedals, and Sandin began to assist him. “It went really fast,” Sandin said, “and I thought, ‘Wow, I kinda like that. It’s soothing.’”

Having access to Someday Isle’s looms has allowed Sandin to continue to weave. The store’s loom has a continuous feed, meaning the loom doesn’t need to be re-warped after every few rugs. “That loom hasn’t been re-warped since 1919,” she laughed.

Beyond the initial instruction Sandin received from Angie Moen, most of Sandin’s learning at the loom has come from working at it. “Until I really mess something up,” she added wryly. “All I can do is call out for help, then she has got to come back and fix it.” But Sandin noted that she has made progress, and she’s at the point where she can usually cut and tie off a rug to start over herself.

Sandin has found herself working on a number of unique projects with a variety of materials. For example, she was approached several years ago about crafting rugs from the material of old Girl Scouts uniforms to be auctioned off at a Girl Scout Jamboree celebration. To make the uniforms usable as weaving material, Sandin stripped the old uniforms down herself. She cut the uniform down into strips, and then sewed them together to create alternating color patterns. The oldest uniform she’d dissembled dated back to 1903. “I don’t know what was with those Girl Scout uniforms,” Sandin noted, “but in one short strip alone, I’ve found seven seams.”

This year, the same Girl Scout group has approached her about making three more rugs in the same style. “That was kind of an honor,” Sandin said, “to have them come back and ask for more.”

During her time at Someday Isle, Sandin has worked on a variety of custom rug orders. The longest rug she had done was covering for a man’s stairwell, which consisted of one 159-inch rug and two rugs around 79 inches. Thanks to word of mouth promotion, Sandin has taken custom rug orders from all around the United States. Whether people have a color scheme in mind or are bringing in their own material, they can inquire about the custom rugs at Someday Isle’s front desk.

Sandin emphasized her one rule: Her rugs are for walking on. “I refuse to do wall hangings,” she said. Her rugs sell for a dollar an inch. “Angie has gotten after me,” Sandin explained, “saying I should sell them for more, but no, I want people to be able to afford to have a rug that’s going to last them a long time.” She was adamant that she would not sell to a customer who said they weren’t going to use her weavework as intended and noted turning down people who said they’d use it as a wall hanging in the past.

Every time someone buys one of her rugs, Sandin will ask them, “What does it make you think of?” Whenever she sees one of her rugs on the loom, Sandin explained, it will often bring a specific image immediately to mind. With equal parts amusement and chagrin, she acknowledged that no one has ever seemed to see the same image as herself. She cited one example, a favorite among the rugs she had made; she had assembled a rug out of black velvet along with turquoise and peach fabric. “To me, it was just the most luxurious rug,” she said, describing it in terms of a Caribbean environment. However, when she asked the lady who bought it what she saw, the lady responded, “50s appliances.”

“It just goes to show you,” Sandin said, “the difference in perspective when two people look at something.”

Sandin added that she often sets out to capture a specific image at the start of making a rug, but as of yet, that image is never the one that comes through in the end. “I keep saying, the day I’ve had a rug that turns out like I had it in my mind’s eye, that’s the day I can quit.”

Speaking to where her inspiration for rugs comes from, she recalled one rug, her “greatest disaster,” where she had attempted to recreate an image of a mountain lakeshore using a similar color scheme. Though she thought she knew how to get the image to come through in the layering of the colors, the rug had not turned out as she hoped. Despite her own disappointment with the end result, she added, “But somebody liked it.” In her experience, there is always someone who likes the rugs she sees as failures.

Sandin concluded by saying that the process of making rugs brings her satisfaction. While she may not always succeed in communicating it, there’s a vision and a story behind each of the color schemes that shapes her rugs. Visitors to the Someday Isle store have the opportunity to add their unique interpretation to the mix–so long as they willing to walk on the craftsmanship when they are done.