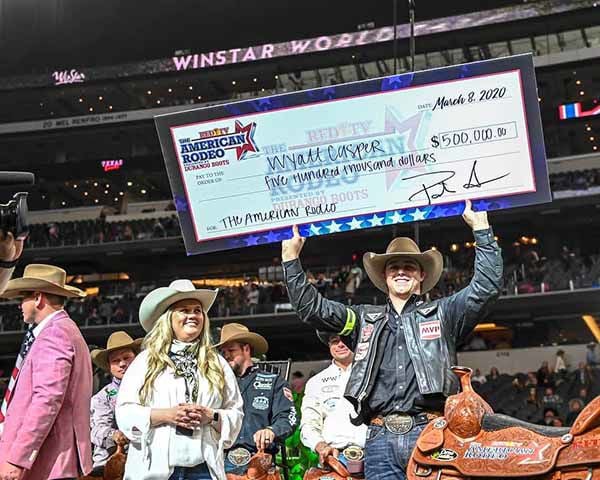 Wyatt Casper, rodeo star with family ties in the Isle area, won $500,000 for his first place finish at RFD-TV’s The American Rodeo, along with an additional $100,000 for placing in the bronc riding category. 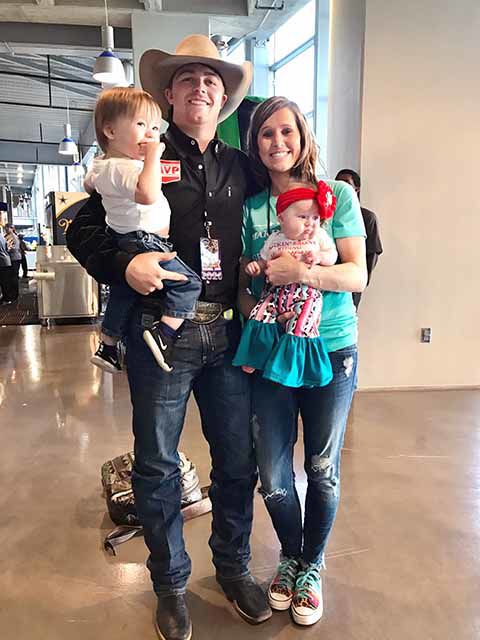 Wyatt Casper stands with his wife, Lesley, and their kids, Cooper and Cheyenne. 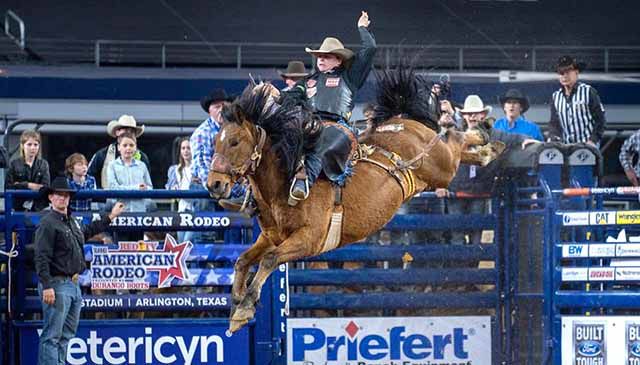 Wyatt Casper at the March 7 competition. He has been competing in professional rodeo for four years. 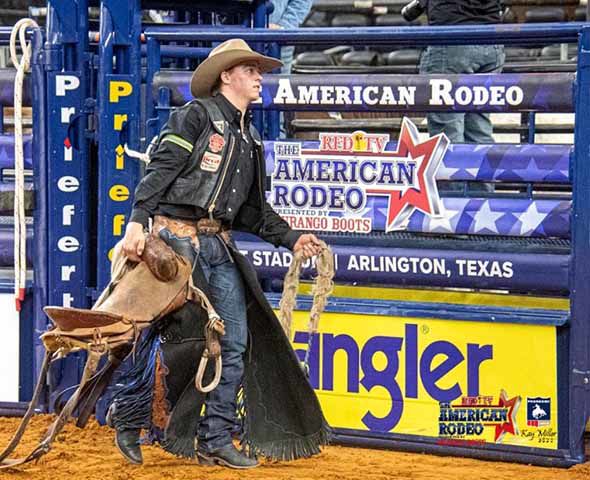 Wyatt Casper at the March 7 competition. 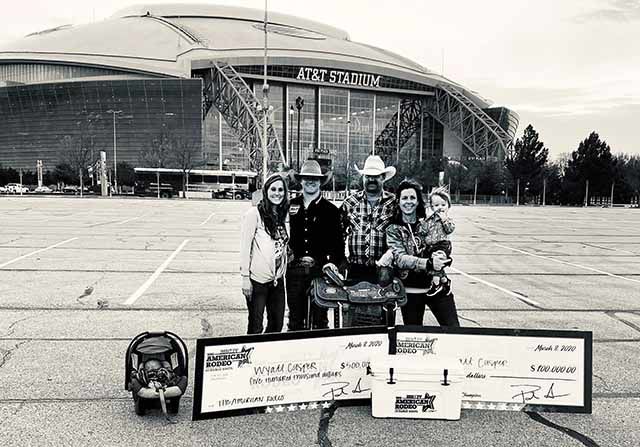 Wyatt Casper, rodeo star with family ties in the Isle area, won $500,000 for his first place finish at RFD-TV’s The American Rodeo, along with an additional $100,000 for placing in the bronc riding category.

Wyatt Casper stands with his wife, Lesley, and their kids, Cooper and Cheyenne.

Wyatt Casper at the March 7 competition. He has been competing in professional rodeo for four years.

Wyatt Casper at the March 7 competition.

On Sunday, March 7, Wyatt Casper netted $600,000, winning the bronc riding competition at RFD-TV’s The American, held at the AT&T Stadium in Arlington, Texas. While this is an accomplishment in its own right, Isle locals have special reason to note this accomplishment. Casper is a former local with family based in Isle, having spent the first five years of his life along the shores of Mille Lacs. Casper took a moment to speak with the Messenger, reflecting on his journey to becoming an award-winning bronc rider as well as memories of his old home.

“I’ve been roping and stuff ever since I could walk and hold a rope,” the 23-year-old bronc rider said. “But I’ve been doing rodeo professionally now for about four years.” He described his career thus far as having “won a few [competitions], and placed at a whole bunch.” To name a few of his successes: He was a 2016 college national champion as a saddle bronc rider; he took first at Logandale, Nevada in 2017; and, in 2018, he took second place at the Cheyenne Frontier Days and at Salt Lake City, Utah.

Speaking on the March 7 competition, Casper said, “Walking into AT&T Stadium is just a little mind-blowing. It’s the biggest place that I’ve ever rode at … It’s a huge pay day, so the blood’s pumping.”

Casper noted that, though he had just been competing at Houston, the competition had been shut down due to the current spread of the coronavirus. “I rode two horses there,” he said. “I was supposed to ride three.” While Casper was scheduled to go compete in Austin on March 20 and was hopefully he would still be able to compete. Since Casper’s interview, Rodeo Austin has officially been cancelled.

With his victory last weekend, Casper said he should have enough money to be qualified for the National Finals Rodeo in December. “We can hit 100 rodeos a year,” he said. “I’m just hoping to stay healthy all year and fund us down at the NFR in December.”

He credited his parents among the biggest influences on his love for rodeo. Others who inspired him included his college rodeo coach, Brett Franks, and his traveling companion of three years, Bradley Harter, who has been an 11-time qualifier for the NFR. “Bradley showed me the ins and outs of rodeo,” he said, “and what’s like to go hard for a full year.” Another rider he credited was Joey Sonnier.

Casper said his schedule could be somewhat unpredictable when it comes to what time he rides at shows. For those who want to keep up with his riding, he recommended following his Facebook page (www.facebook.com/wyatt.casper.3) and Instagram account (@wyatt__casper). These pages provide updates on when he will be riding.

Casper was born in Mora. While he did live in the Isle area for his first five years, he admitted he couldn’t remember much from back then. His family did make yearly visits to the Mille Lacs area. “I do remember visiting family, going to the lake, and that fun stuff,” he said.

John Casper, Wyatt’s dad, also spoke on his son’s success. “He’s a great kid,” he said, “very humble, a hard worker. He hadn’t been riding saddle bronc long when he got successful, but he’s studied it. He really wanted to be great at it. He’s all around a great kid.” John added that making it to the National Finals Rodeo was the goal of every professional rodeo rider. “And Wyatt’s dedicated to it,” he added, “making the top 15, getting that golden buckle and being the best in the world.”

Donna McClain, Isle local and Wyatt’s grandmother, also spoke on what Wyatt’s accomplished. “He’s a great young man, and I’m pretty proud of him … I watch him whenever he rides, because it’s on Dish. Oh, I get so nervous my stomach aches. [Wyatt’s father] always tells me there’s no need to get so worried.”

“I love riding saddle bronc horses, and I love rodeo,” Casper said. “Everybody in rodeo is just like one big family. You won’t find a better set of people in any other sport. They come together and are willing to help each other out.” He acknowledged the support he received from his own family. “I wouldn’t be here without my wife,” he said, “without my kids. I’m humbled by all the experiences and success I’ve had.”