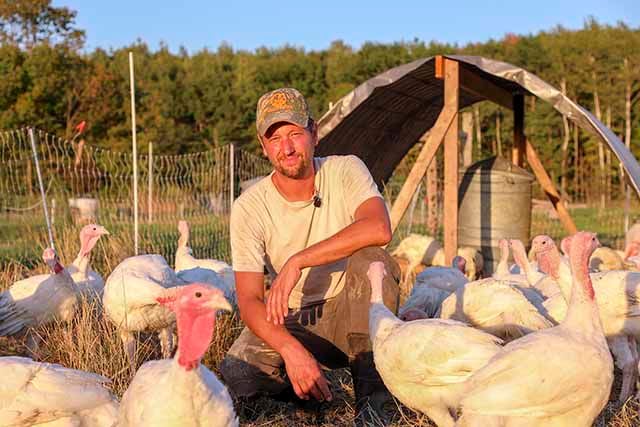 Andre LaSalle, of ForageScape Farm in Onamia, with his family-farm raised turkeys this summer. 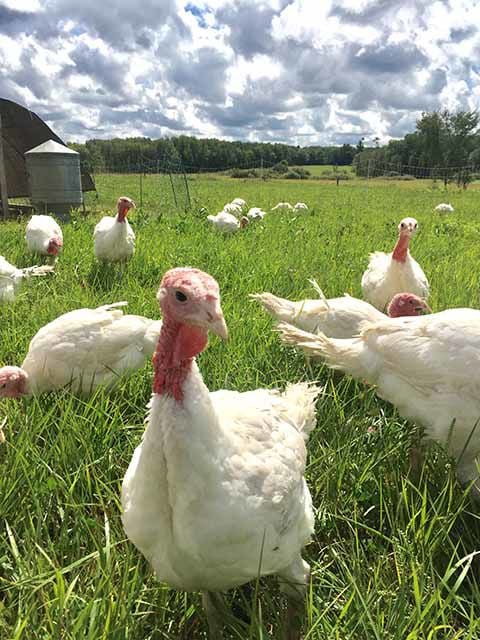 Pictured above are some of the turkeys produced at ForageScape Farm. 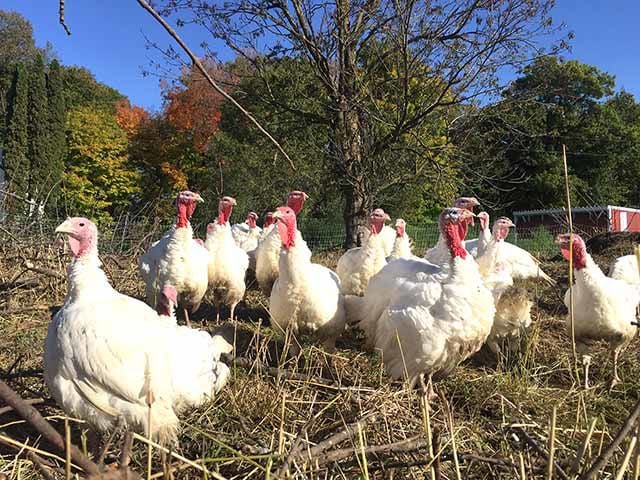 Andre LaSalle, of ForageScape Farm in Onamia, with his family-farm raised turkeys this summer.

Pictured above are some of the turkeys produced at ForageScape Farm.

“Turkeys are fun,” Andre LaSalle said, offering a fun fact: “They are unique, because they’re the only meat we all eat that’s native to North America. Turkeys are indigenous while beef, pork and chicken were all brought here. It’s quite the appropriate bird for Thanksgiving.”

Raising meat is a passion of Andre’s. Since 2016, he and his wife, Morgan, have been running ForageScape Farm southeast of Onamia. A small family operation, the LaSalles’ farm raises the gamut of livestock. That includes turkey, which the family butchered just last month. With Thanksgiving fast approaching, the LaSalles are now about to make their mid-November delivery run, distributing their birds to buyers in the Twin Cities. Locally, the turkeys have already been delivered.

Andre grew up in Northfield, Minn. After high school, he and Morgan moved to Alaska for a year. They then moved to California, as Morgan was originally from the state. It was there, 10 years ago, that the couple first started farming, raising some animals for themselves including a few turkeys for Thanksgiving. Four years ago, the family moved to the Mille Lacs area due to the pasture space the local area afforded them. The LaSalles founded ForageScape Farm, where they now pasture-raise a variety of livestock. The meat they sell includes beef, pork, chicken, lamb, eggs, and, of course, turkey.

It’s first year, the farm raised around 15 birds, and over the past four years, they’ve increased up to 75. “[Our farm] is small scale no matter how you look at it,” Andre said, noting the LaSalles aren’t a huge facility raising thousands of birds. The farm is focused toward producing the highest quality turkey, Andre explained, not necessarily toward the quantity of birds.

To start each year’s flock, Andre said ForageScape orders it poults (young turkeys) through the mail, which they receive at the Onamia post office. He added that turkeys are very delicate animals to raise up until week five, but after that, they become much hardier compared to chickens. He recalled a violent storm July of this year, which he had been sure would kill his entire flock. Going out afterwards, he found all his birds huddled under their shelter, not a single bird dead.

ForageScape raises its turkeys between June and October. The turkeys are moved outdoors around five weeks old and remain outdoors until they are eventually taken to slaughter around week 16. As the turkeys can’t be kept on the same plot of pasture for long, Andre said their enclosure, consisting of portable electric fencing, is moved to a new location within the pasture every three to five days. “You want to move them so their last move is as close to your driveway as you can get,” Andre said, “so you can load them in the livestock trailer.” He added that it doesn’t always work out so cleanly; last year, he had to carry the turkeys about 100 yards, receiving a beating in the process.

Another interesting aspect of raising turkeys in an outdoor environment, Andre said, is supplying them with grit. Birds naturally consume small stones to aid in breaking down food, he explained. Along with the natural forage their pasture provides, ForageScape feeds their 75 birds about 750 pounds of grit in a year.

“To put a term to the niche market we’re in,” Andre said, “we’re pasture-raised.” The birds are raised in an outdoor pasture, feeding on natural forage. The key to pasture-raising the turkeys, he explained, is that they are rotated around the pasture. This rotation allows the manure to serve as an asset, working as fertilizer, rather than as a liability.

Andre noted that turkeys are only a small-portion of what ForageScape does, making up 5 to 10 percent of the farm’s business. “Primarily, we do pork and chicken. Turkeys are just one more thing we can add to the repertoire for our customers.” Quantifying how the farm has grown over the past four years, he said they had started off 50 chickens and are now at 1,000. Where turkeys are concerned, Andre saw 75 birds as the upper limit of what the farm could raise without expanding its facilities, which he hasn’t ruled out as a future possibility. “Every year, we are struggling to grow as fast as we can,” Andre added, “without compromising what we do.”

When it comes to selling turkeys, ForageScape sells both in the local area as well as the Twin Cities metro area. Andre estimated about 10 percent of the birds were bought locally and 90 percent going to the Cities due to the greater population. Turkeys are sold on a reservation basis before the Thanksgiving season, usually wrapping up around mid-October.

During the summer, Morgan operates the ForageScape stand at the farmers market in Isle while Andre runs a circuit of three markets in Minneapolis. In addition to farmers markets, the LaSalles also sell their meat through the farm’s website. Andre noted that all sales go directly to individual buyers, as ForageScape doesn’t sell their meat through wholesale. During the off-season, January through May, the LaSalles run meat deliveries in the metro area.

And when it comes to serving the turkey? Andre recommends brining it, letting it soak for 24 hours in a solution of salt, sugar and garlic. “It makes for a juicy turkey,” he said. “I recommend it to all my customers.”

Andre said he and Morgan had been motivated to start the farm out of a general desire to know where their food comes from and take responsibility for it. He added that they are proud of the product they offer the customers and support the local community is able to offer them. Whether it’s turkeys or any of the farm’s other livestock, the LaSalles are committed to offering a local, high quality product. “It’s like old MacDonald’s farm,” Andre said, “24/7, stuff is always going on somewhere.”

More information about about ForageScape Farm can be found on the farm’s website: foragescape.com. The farm also can be found on Facebook (@ForageScape) and on Instagram (foragescape_farm), where the LaSalles frequently share photos of the animals as they are being raised.