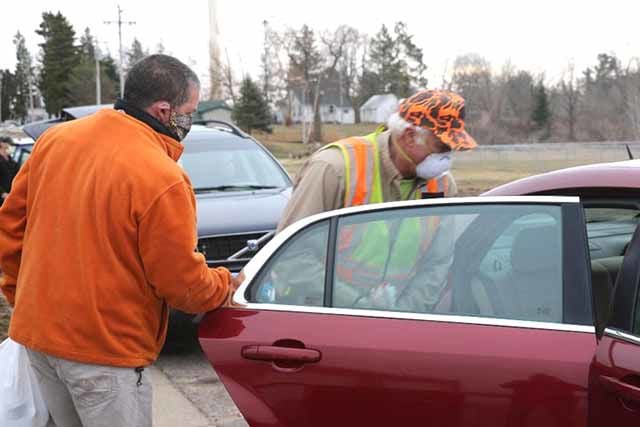 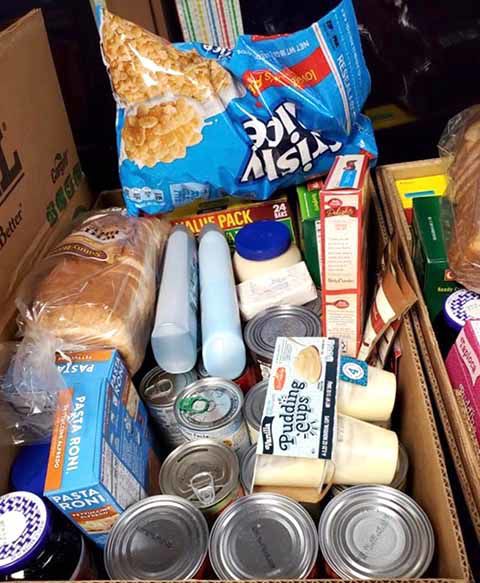 One of the many food/care packages that go out to families from Isle School.

One of the many food/care packages that go out to families from Isle School.

As the COVID-19 pandemic has carried on from weeks to months, the amount of hardship in communities both local and afar has mounted. Though food is a necessity, it’s availability is not always a guarantee, particularly in times such as these. Fortunately, local food shelves exist and do their part to help ease this burden. Following are details on local food shelf organizations doing what they can to help during this pandemic.

Ruby’s Pantry is a charitable 501(c)(3) organization serving communities throughout Minnesota and Wisconsin, including Onamia. RoxAnn Sahr, co-executive director, explained that the organization is named for her great-grandmother. “She always had food in her house to feed people,” Sahr said.

“At our sites, there are no guidelines,” Sahr said, “and we are not government funded. Everyone is welcomed who are hungry.” Ruby’s Pantry makes monthly deliveries at each of its locations. Guests make a $20 donation, are given a number by a volunteer and then wait to go through a food line.

Given the circumstances of the pandemic, Sahr said the process has changed to a drive-through. Guests remain in their cars, Ruby’s Pantry volunteers do not touch anything but the food and they are required to wear masks and gloves. Guests check in while in their cars and receive a number on their windshield. Volunteers then place the bagged food in the trunk.

Sahr noted that food comes from locations all over Minnesota, Wisconsin, Iowa, and Illinois, and from a variety of companies. In addition to gloves and masks worn by volunteers at the delivery locations, she also noted similar precautions taken by workers and drivers with Ruby’s Pantry’s warehouses.

Sahr added that Ruby’s Pantry has been serving more people during the pandemic, including 24,000 in the last month. Towns served by Ruby’s Pantry, she said, have been requesting emergency drop offs, and Ruby’s Pantry sites have requested to start secondary pantries in addition to their normal pantry. Some sites have had their truckload of 400 food bundles sell out, forcing them to turn people away. “That has been very hard for our sites,” she said. However, she added that she believed that Ruby’s Pantry has overall been able to meet increased demand and need. She stated that the organization is preparing to do more emergency drops in the near future and that the number of Ruby’s Pantry sites is going to increase.

Ruby’s Pantry in Onamia can be found near the Rolf Olson Center at 806 West Kathio Street. Drop offs are the first Monday of each month with registration starting at 10 a.m., and the food distribution from 10:30 a.m. to 12 p.m.

The Isle School food shelf was established three and a half years ago, explained social studies teacher Jen Ernest. Prior to its establishment, the elementary had a backpack program sending food home through Catholic Charities, and Ernest also noted Isle’s own food shelf. “However,” she said, “we saw teens struggling. We wanted somewhere where teens could come and bring home teen-friendly food either to eat themselves or prepare for their family.” Over the past three years, Ernest noted that the school has had generous donations that have allowed them to keep the food shelf stocked and timely with student wants and needs.

Ernest noted the present circumstances and the lack of students in the school. As the school knows which families are at risk, Ernest said they have reached out to those families to see if they are in extra need of help. Between high school and elementary, Ernest said there are 25 families that have requested assistance.

The school has been sending boxes with supplies from its food shelf out with Friday homework deliveries, alternating between families every other week. The school has been “keeping [their] fingers crossed [they] can find money and donations,” Ernest said. “It is an undertaking.” As Ernest has also been doing her work as a teacher during this time, about three or four other dedicated staff members have been helping to organize, box and shop. This team is headed by ShadiAnn Schultz, whose office houses the food shelf.

Serving the areas of Wahkon and Isle, the Isle Food Shelf is located on 2nd Ave, just north of Isle Town Hall. The shelf is open from 4 to 6 p.m. the first Tuesday of every month and 2:30 to 5:30 p.m. the fourth Thursday of every month. Residents of Isle and Wahkon are eligible, as well as families with children at Isle School and those referred by a pastor. Applicants need only walk in and fill out an application. The food shelf can be reached at (320) 630-0995.

Family Pathways food shelf serves nine communities, including Onamia, where they are located at 502 E. Main Street. They are open Mondays, 12 to 5 p.m.; Wednesdays, 12 to 5 p.m.; and Fridays, 10 a.m. to 3 p.m. As of March 16, Family Pathways has shifted from offering on-site shopping for customers to a pre-packaged curbside delivery model. The Onamia site can be reached by phone at (320) 532-7665.