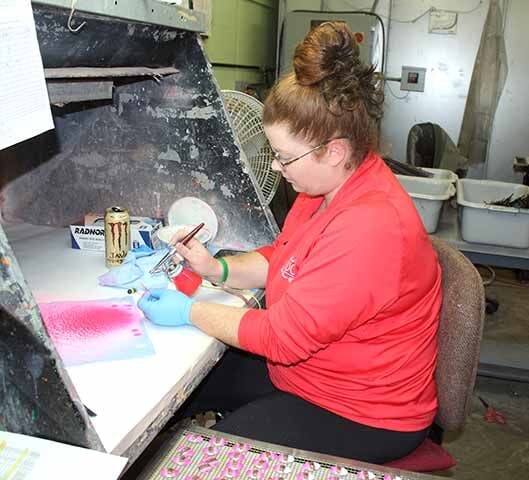 The work that makes the lures 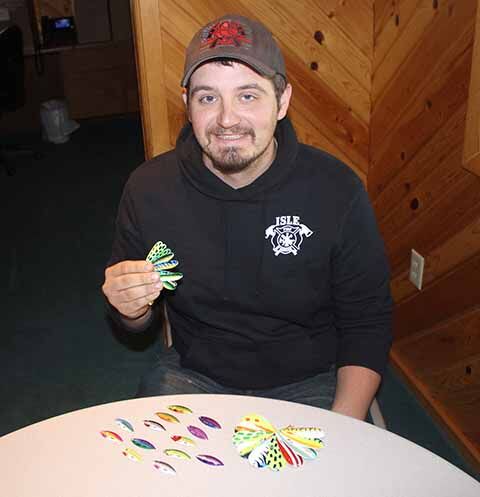 Lakeland graphic designer Ethan Skrove shows off some of the in-house designs available through the component manufacturer. 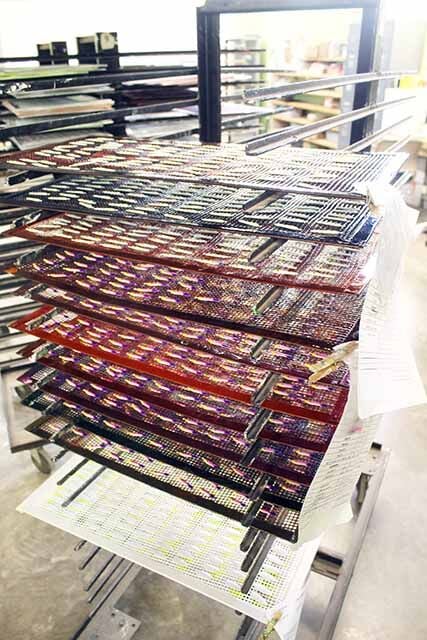 A rack of finished components sits ready after their voyage through the hand-painting process. 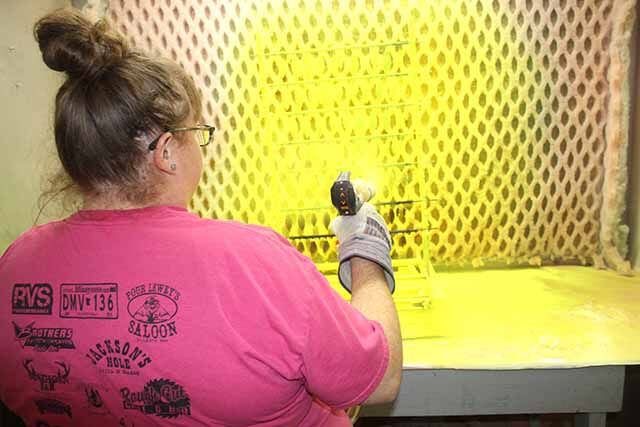 The work that makes the lures

Lakeland graphic designer Ethan Skrove shows off some of the in-house designs available through the component manufacturer.

A rack of finished components sits ready after their voyage through the hand-painting process.

Bright and colorful, even those outside the angling community can recognize the unique shapes and colors of that reliable fishing tool, the fishing lure. And the designs that grace those small metal bits occasionally get their start along Mille Lacs’ own shore. Lakeland Component Solutions was founded in 1951, and they manufacture the colorful parts that become the lures that adorn the ends of anglers lines. Ethan Skrove, Lakeland’s graphic designer, spoke on work, often done by hand, that allows Lakeland’s components to show their true colors.

Growing up Skrove attended Mora High School, and he has known his wife, from Isle, since around the ninth grade. He’s been generally familiar with the Mille Lacs area, particularly Isle, for most of his life.

Skrove graduated college from the University of Minnesota-Duluth in 2015, where he studied environmental and outdoor education. For a time, he worked in state park management on the weekends while helping adjudicated youth. The stress of this work began to affect his personal life, he noted. “It was affecting my personal and home life,” he explained. “And I was not a happy person.” One summer during his college years, he had done work for Lakeland while living near Isle. After receiving a call from Lakeland asking if he could step in to replace their graphic designer, he decided to return.

Skrove has been working with Lakeland Component Solutions for a little over four years now, primarily as a graphic designer. However, he added that he has done “a lot of everything,” including painting and managing the finishing process.

Lakeland has been manufacturing fishing components in Isle since 1951. Citing the history he knew, Skrove said the company had initially focused on stamping metal lures. They had done plating for a time before other plating businesses, such as Spectrum Merit Enterprises, moved into the community. As they moved away from plating, Lakeland pivoted to painting. Lakeland’s history of hand-painting their components extends back around 30 years.

Skrove noted that Lakeland was a manufacturer that worked with other manufacturers, and Lakeland itself does not sell the finished products made from their components. “We’ll sell you everything you need to build a fishing lure,” he said, “but we don’t sell it to you combined.” There are only three or four fishing component factories in the country, and, he added, “We’re one of the biggest.” Lakeland does business with manufacturers globally. Tonja Eklund, a fellow Lakeland employee, clarified that the factory stamps approximately 15 million spinner blades and spoons annually and paints approximately 1.5 million of these products in the same year.

Sometimes, Skrove noted, they will take orders for custom designs, usually commemorative items for local businesses and people. Such custom designs are uncommon, however. Skrove stated he had done only one in the previous six months.

There are several processes that Lakeland uses to put designs on their components, Skrove explained. Where Skrove’s graphic design is concerned, he’ll often create digital designs that then get transferred onto the metal components. The hand-painted components come out slightly brighter, Skrove said, but as the image transferring process improves, he suspected the difference would soon be hard to tell. Skrove estimated about 30% of orders used this digital transfer process, and the rest were hand-painted with airbrushes.

These numbers could also vary. Skrove noted that some big customers’ orders were exclusively digital transfers. Some other orders were strictly airbrushing. Season was also a factor, Skrove noting that during the current part of the fall, Lakeland focuses on spinner blades for the coming spring, and these components are predominantly hand-painted. In seasons where more spoon components are put out, the split could be closer to 50-50.

Skrove also works directly with the staff who hand-paint the components, and due to staffing needs, he has been painting himself the last three months. Often, the painted designs are provided by customers, and the painters will work to match what they’ve been sent. “It’s not so much us creating a color. It’s more [the customer] has an idea or design. And they’ll paint it themselves, or they’ll send a piece of paper with a sketch.”

Walking through the design process, Skrove said that if a customer sends Lakeland a sample design, he first looks over the designs’ colors to see whether the digital transfer or hand-painting process can match it. “We have a team of us who’ll meet together,” he said, “and we’ll decide, ‘Are these colors too bright? Can we do it this way or that way?” After these decisions are made, blank blades will be sent through for a base coat, colors for the edging and then finer details with a pad printing machine. A sample would then be sent to the customer for approval, and another would be kept on hand. If revisions are requested, the team will create another set with adjustments.

Once it’s approved, Lakeland will then work to recreate the design to fill out the customer’s order. “We’ll make however many thousand,” Skrove said, “and we’ll use that sample that we kept to make sure the design is right.” The process of producing samples is done as quickly as possible, Skrove said, within a week to a week and a half. Fulfilling the actual order depends on the size of the order and the complexity of the design. A simple design can be put out the same week; something with many airbrush steps would need additional drying and can take two to three weeks.

Skrove noted that the painting process itself is very meticulous. “You shouldn’t be able to tell with the naked eye that any piece is different,” he said. One advantage that Lakeland has in this regard, Skrove explained, is that the employees collectively share around 250 years of experience, with several having worked their job for many decades. As new employees are brought in, he said, it was important for those years of knowledge and experience to be passed along. “Learning from the pros is always the best.”

Seeing the process through

Checking durability is also an important facet of the process, and Skrove said a lot of work is put into making sure the paint is not going to chip. Pieces are tested both against rough physical contact and in water to make sure the paint holds. In cases where there are issues, further layers of paint and sealing can be applied. Durability is also aided through powder coating, a process where some of the metal products are electrically charged and then sprayed with a powdered paint that is electrically drawn to the metal. The pieces are then cured with heat, providing a stronger seal for their base coating. This process is primarily used for muskie lure components and occasionally for pieces where a base coat is applied to both sides of the metal.

Speaking on future improvements he could see coming to the process, considerations include getting a new printer to print onto the blades and expanding personnel. “We are always looking to innovate,” Skrove said. “We are open to trying new processes.” One innovation he pointed to was the powder coating booth, installed a year and a half ago, which has increased Lakeland’s powder coating output. Older equipment has also been updated to allow Lakeland to work more efficiently, including replacing the facility’s air make up systems.

Skrove noted that he has a history of fishing, though his family life doesn’t allow him to go out as often as he used to. A number of other employees share this passion for outdoor recreation. “I think that helps with the design,” he added. “A lot of our stuff is tested by our employees … If they have a design idea, and it’s good, we can add it to our catalog and start selling it to our customers as well.”

“I definitely enjoy my job here,” Skrove reflected. “I get to come to work and play on my computer, coloring, like we did in elementary school, or I’m helping with manufacturing. It’s very cool to see a part start as a roll of steel or brass and see it come out a finished fishing lure with colors.”