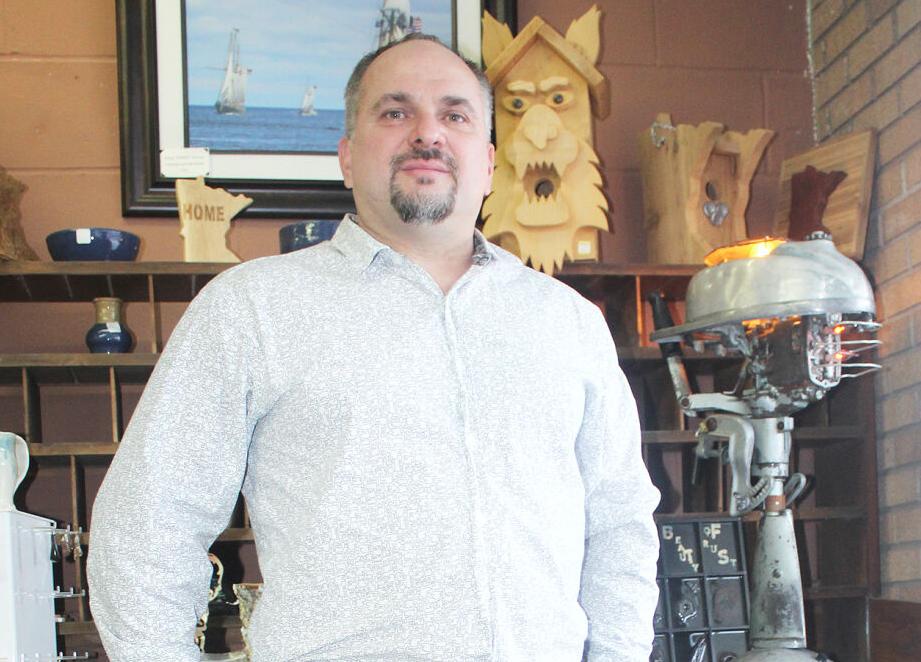 Paul Klebs has put his refurbishing skills to work designing all sorts of unique lamps, many of which aim to capture an industrial, steampunk aesthetic. 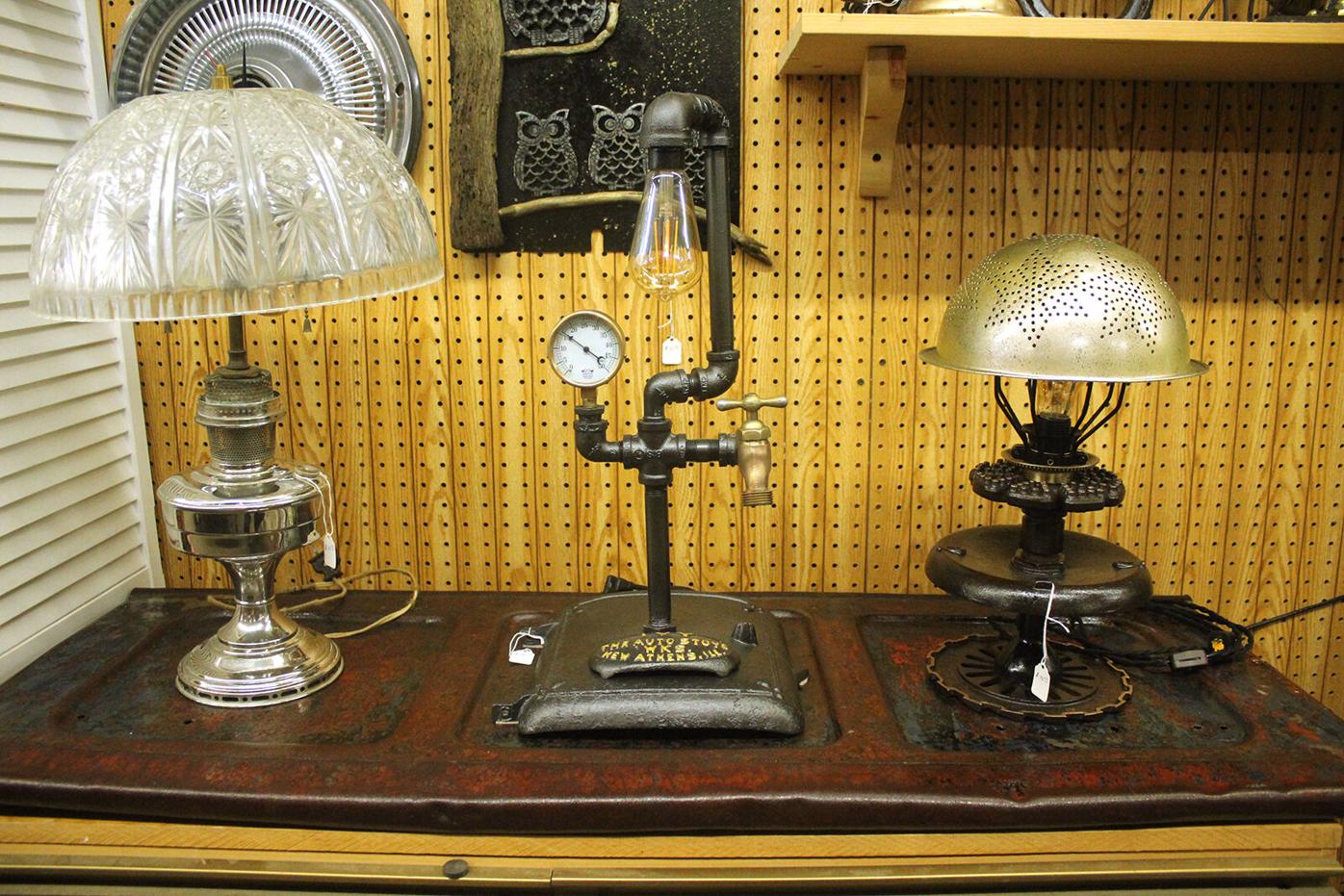 A few of Klebs’ lamp designs

Paul Klebs has put his refurbishing skills to work designing all sorts of unique lamps, many of which aim to capture an industrial, steampunk aesthetic.

A few of Klebs’ lamp designs

Cogs, valves, pipes, clock faces, and brass: All these items are a telltale signature of the steampunk aesthetic. Coined in the late-1980s, the term “steampunk” describes a fantasy genre that evokes both 19th century steam-powered industry and the British Victorian age. Local Paul Klebs has been a long-time fan of the genre. Combined with a life-long interest in refurbishing what’s old, steampunk is Klebs’ muse. Whether it’s on Facebook Marketplace or at the Someday Isle store on Isle Main Street, those interested can find Klebs’ work, both lamps and other art pieces, done up with a steampunk flair.

While Klebs was growing, he said, his dad led a wandering lifestyle. Klebs was born in Bertha, Minn., south of Wadena, and he traced his roots back to the family farm near that community. However, he also spent 10 years living in Tulsa, Okla. In 2018, he came to the Mille Lacs area to take care of his dad. “And I just fell in love with the area,” he said.

Klebs credits the 1984 film “The Ice Pirates” for drawing him to the steampunk genre. He’s been drawn deeper into the world in the past three to four years, based on an interest in steampunk-inspired attire. “The whole purpose is taking something from the industrial or Victorian age,” he said, “and mixing it with the future, making something that’s useful for today.”

Klebs recalled the first piece of steampunk art he made, a bracelet, back when he was 10 years old, which he gifted to a female friend. He made such creations occasionally, describing a passion for “making something pretty out of something no one wanted.” Klebs’ grandfather had owned a salvage yard and also had an interest in fixing or repurposing items with the spare parts he had on hand. Klebs suspects his grandfather’s drive runs in his own blood.

Prior to getting back into his art, Klebs has made a career out of renovation. Since 2000, he has been working as a real estate investor. Much of his work is now consulting, helping investors find properties for renovation and providing resources to make sure quality work is done. “I’ve been renovating houses that different cities have been ready to push down for 20 years,” he added. Besides real estate investment and consulting, he has also refurbished old muscle cars. “It’s all an ongoing process of tinkering with stuff that’s ugly and making it pretty,” he said.

Recently, Klebs said the events of his life have led to him reevaluating things. His grandfather passed away 22 years ago, and he had been helping his aunt and uncle clean-up the family farm. As he worked, Klebs found more and more old items that interested him, and he realized he wanted to get back into repurposing it. In February 2020, he began to get back into his old refurbishing hobby. “It’s like phoenix, coming out of the ashes,” he said, a statement that applies to both his return to the hobby and the hobby itself.

The work Klebs does can be challenging, he explained, but he finds the end results well worth the effort and time it takes. The time commitment to make any given lamp varies; a smaller torch lamp might only take four hours to make while more involved steampunk designs can take between 10 and 15 hours. He added that none of his components are cheap plastics, and he mostly works with the pre-1950s antiques and vintages he can find.

In general, he focuses on making sure his pieces repurpose and reuse old material, but he also likes to have fun with the design. When it comes to his steampunk lamps, he always tries, if possible, to find a non-standard way to incorporate the light switch, usually as a valve or knob in the design.

Klebs noted that his work is not strictly steampunk as he does industrial-inspired pieces and wall junk art as well. One such example is a collage piece currently available at Someday Isle. Originally an old space heater, pitted with rust, Klebs painted the metal to look like a starry sky and attached some owl ornaments along with a piece of driftwood. Also available at Someday is another design he’s found to be quite popular: hubcap clocks.

Klebs has had people reach out to him about both repurposing or restoring old items, and he was willing to talk through such requests with any interested parties. He noted that, for some of these items, he’s been collaborating with local metalworker Jason Beamish for parts of the process. “If someone has some weird old junk,” he added, “instead of sending it to the scrapyard, let me take a peek, and I can give you some money for it.”

In the future, Klebs is looking to find a local space he can use as a workshop. “I’m already growing out of my location,” he said, “and I’ll need to get somewhere bigger.” As the process becomes more streamlined, he also hopes to hire and teach people about how his refurbishing work is done. Eventually, he might even expand into offering classes on his work.

As his business expands, Klebs is also finding to incorporate his love for steampunk into his work. He noted one patron who wanted the designs incorporated into a house renovation while an auto shop has asked him to incorporate repurposed auto parts into the store’s new furnishing. “The steampunk lamps were a hobby,” Klebs, “ … but it’s evolving very rapidly into, potentially, a career.”

Steampunk is immediately recognizable for its aesthetic sensibilities, and Paul Klebs brings an abundance of style and passion across his body of work. Klebs is dedicated to making old things new again, and that hobby is adding a bit of brass and gears to the local texture of the Mille Lacs community.

Someday Isle is currently the main storefront at which Klebs’ pieces can be found. Paul Klebs can be contacted directly via phone at (320) 761-5282 or via email at paulgklebs@gmail.com.