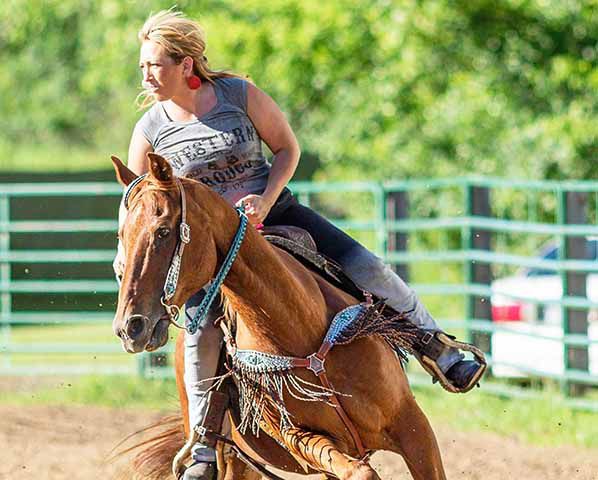 Anna Haggberg with her rescue horse, Johnny Red, barrel racing at the Saddle Club in Aitkin. 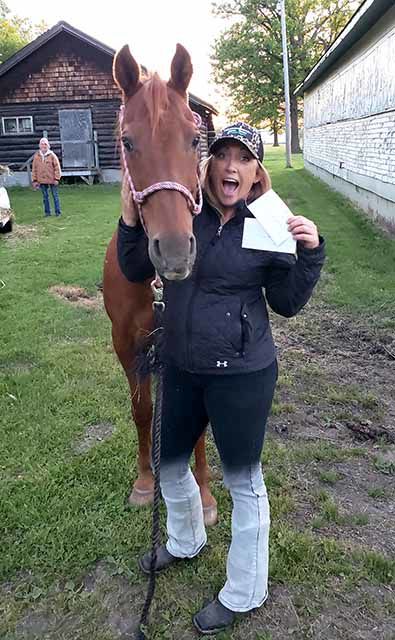 Haggberg and her special horse, “Johnny Red,” just after winning earnings from placing in games.

Anna Haggberg with her rescue horse, Johnny Red, barrel racing at the Saddle Club in Aitkin.

Haggberg and her special horse, “Johnny Red,” just after winning earnings from placing in games.

For local woman, Anna Haggberg, rescuing horses has saved not only horses’ lives but may have saved hers as well.

“I think it (getting involved in horse rescue) really started happening two years ago when my friend Asia and I would make wreaths and donate the money ... then one day there was a pony, and well, she took that pony home,” recalls Haggberg.

But the main catalyst behind Haggberg’s efforts began two years ago with her son’s epilepsy diagnosis. At that time, Haggberg was starting to struggle with depression. “I spent most nights not sleeping and cried all the time,” she recalls. “A mom is

supposed to be the glue of the family, and I was barely holding it together myself.”

Then last fall, Haggberg got a horse from rescue. “I got a horse that I didn’t really even want. He was in the pen (at an auction) for two weeks and had only four minutes left until he was shipped out to slaughter. My plan was to re-home him after I got him,” recalls Haggberg. “I went to pay for him, and I was told I owe nothing for him, and he was a gift. I was told I needed him as much as he needed me.”

The horse arrived at Haggberg’s farm. “When he arrived, something struck me. It was a really rare, odd feeling that I hadn’t felt before. I caught myself crying on this horse’s shoulder, and something told me he was special. I never just hop on a horse, but I did this time. And he was broke.”

From there, it was history for her and Johnny Red. Haggberg started bringing Johnny to shows, and after a few months, he started placing in events and even winning money.

“I remember the first time his name was called,” says Haggberg. “I was with my friend Kristi. Her and I jumped for joy–a slaughter horse that I had for less then a year was competing and keeping up with girls who have ran the same horse for years.”

But beyond the prizes, Johnny has been therapy. “I don’t take meds for my stress or depression. I walk out to my barn,” says Haggberg. “And my family helps a lot.”

Horse rescue didn’t end with Johnny. Haggberg got involved with a group of people who pull horses from “the pen” before they get shipped to Mexico. “Some of the horses don’t even make the 30-hour ride to Mexico,” says Haggberg.

The situations the horses come from can be quite dire or just plain sad. “Some come from abuse or neglect, and some come from ranches out west or are older, and nobody wants them,” says Haggberg. “Some come in starved, some haul their horses to sales barns because they can no longer feed them and some of these horses have won hundreds of thousands in dollars as race horses. And no one knows why that horse is in there. I just took in two that could hardly walk because their feet were so bad.”

Rescuing horses can be costly, but Haggberg works three jobs, and in the summer she transports horses. “Some of these horses need immediate attention; some of them are starved and need additional supplements. The hay is very expensive, and it’s mainly your time. But it’s worth it. When you unload a horse and take one look at them, their eyes hit your soul. It’s almost like they are thanking you,” she says.

Haggberg adds that it’s a way for her family to spend time together as well. “My boy Tucker has started to really become involved and has been transporting with me every trip. He always asks which one is coming home now,” quips Haggberg. “My mom, Anita Conway, also has a rescue named Cookie, so she has been helping a lot along with my brother.”

“My mom always said be nice to everyone and everything because they might be one of the Lord’s angels. Well I think he is one of them. He put life back in me,” adds Haggberg.