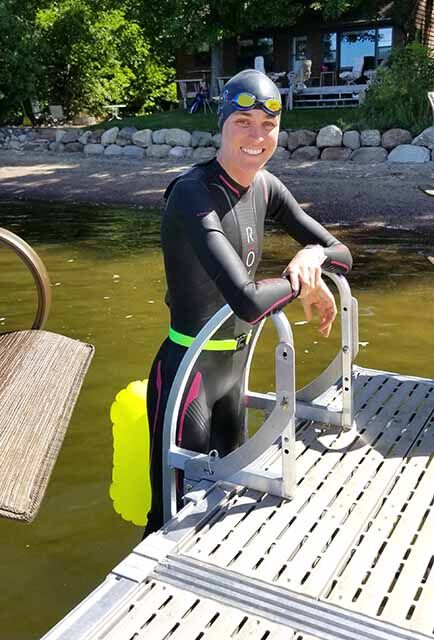 Olympic athlete Gwen Jorgensen has kept up her fitness training while vacationing with family on Mille Lacs, taking swims for several miles along the lake’s east shore. Jorgensen favorably compared her swims in Mille Lacs to those she’s taken in the ocean, but without the sharks. 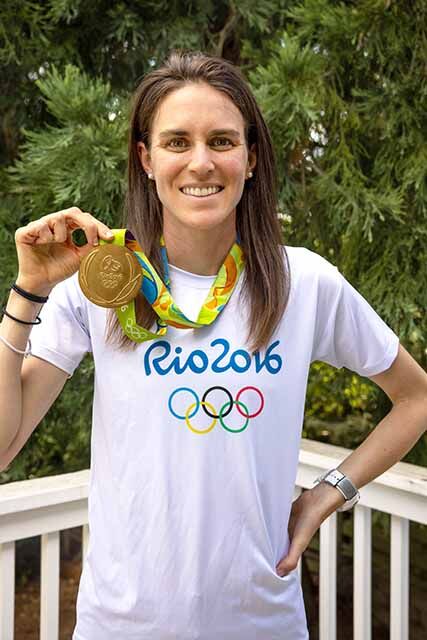 In 2016, Gwen Jorgensen took the gold medal in the Olympic Triathlon, setting a historic first for the U.S.A. team, according to teamusa.org. 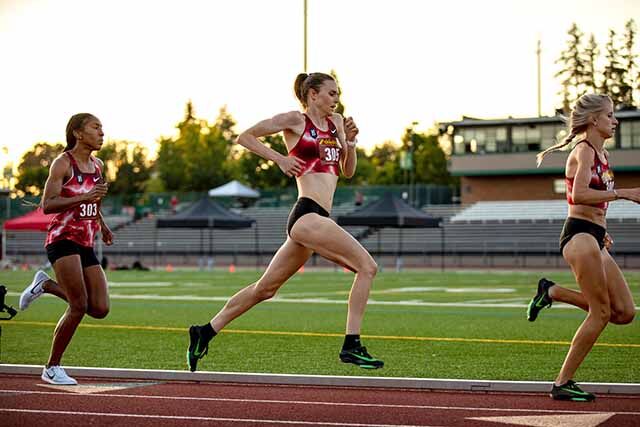 In 2017, Jorgensen retired as a triathlete, choosing to instead focus on her running, where she feels she still potential to challenge herself and grow. She is currently training for next year’s Olympic qualifier. 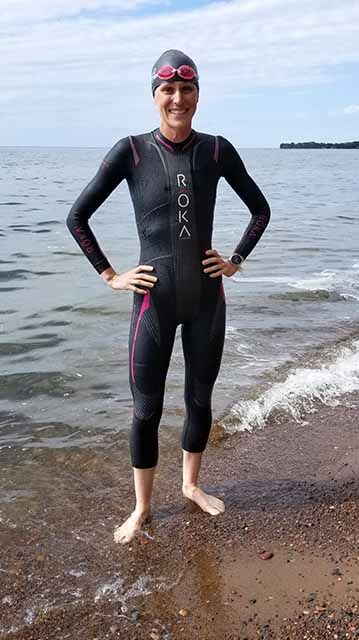 Olympic athlete Gwen Jorgensen has kept up her fitness training while vacationing with family on Mille Lacs, taking swims for several miles along the lake’s east shore. Jorgensen favorably compared her swims in Mille Lacs to those she’s taken in the ocean, but without the sharks.

In 2016, Gwen Jorgensen took the gold medal in the Olympic Triathlon, setting a historic first for the U.S.A. team, according to teamusa.org.

In 2017, Jorgensen retired as a triathlete, choosing to instead focus on her running, where she feels she still potential to challenge herself and grow. She is currently training for next year’s Olympic qualifier.

Gwen Jorgensen is no stranger to the water. Swimming made up one-third of her oeuvre when she was an Olympic triathlete. While her decade’s worth of Olympic competition has taken her around the world, Jorgensen’s family has now drawn her to Mille Lacs; her in-laws reside on the lake’s east shore. Jorgensen shared what sort of training potential Mille Lacs has to offer for an Olympic competitor and what she hopes the future holds for her in such competition.

Jorgensen began swimming competitively at age 8, and she started running while in high school. During college, at the University of Wisconsin - Madison, Jorgensen was an NCAA Division I swimmer and runner. The U.S.A. Olympic triathlon team had a college recruitment program, and Jorgensen found herself recruited due to her swimming and running background. She officially began competing in 2010.

“I’m always looking for a challenge,” she said, “and representing the U.S.A. is something that always motivates and inspires me. When you wear U.S.A. across your chest, it’s something you take a lot of pride in.” In 2016, Jorgensen won the Olympic gold medal for triathlon, which teamusa.org notes was a historic first gold medal for the USA triathlon team.

Jorgensen’s Olympic career has taken her to every continent of the world, save Antarctica. This has included training in both Australia and Spain. “We spent some time in New Zealand,” she recalled, “and I thought it was beautiful. I’ve always been drawn to mountains and water.”

In 2017, Jorgensen retired from triathlon and now competes as a professional runner. She said, “In triathlon, I had reached my potential. I haven’t reached it yet in running, and, for me, I need challenges every day.” Her running career sees her primarily competing in the U.S. “It’s been kind of nice,” she said, “to see different parts of the country.” Jorgensen lives in Portland, Ore., and she noted a nice track in Eugene, Ore., at which she regularly runs.

A visit with Jane and Craig Lemieux, Jorgensen’s in-laws, brought her to Mille Lacs Lake for the first time this summer. “It’s been really nice,” she said. “I’ve been able to swim a bit in the water and enjoy some family time.” Jorgensen begins her swims at the Lemieuxes’ lakefront property, and she has made her way along the east side of the lake. These swims usually extend for a couple miles, following the sandbars near the shore. “I’m close in,” she explained, “and I wear a little buoy to make sure I can be seen.” For Jorgensen, this swimming serves as cross training, to keep fitness in her routine. She is also doing some running around the area as well.

Jorgensen noted that she had dropped triathlon in part because she disliked swimming, but she enjoyed the swimming opportunity Mille Lacs presented. “It’s so fun to get to swim in open water. You don’t get lakes like this to swim in very often. Her triathlon swimming was often done in open water, in lakes or the ocean. “What I love about Mille Lacs is it’s so big it almost looks like you’re at the ocean,” she said. Her time on Mille Lacs has been peaceful and relaxing, and she noted that Mille Lacs was one of the most beautiful lakes she’s seen, as well as being the perfect size. “Water brings a lot of healing and serenity, so to be able to be here and see this beautiful water is something I don’t find in many places.”

Jorgensen also spoke on the time with family she’s been able to have on Mille Lacs. Her son recently celebrated his third birthday, and she added that he also loves swimming. “He’s been in the water every day,” she said. “He’s so cute. He’ll be shivering, lips blue, but he’ll say ‘No, no, let me stay in longer.’” She credited the support of her family enabling her to compete the way she has. “My husband … he used to be a professional cyclist, and he quit to take care of me. He’s a stay at home dad.” She felt it was important to have balance in one’s lifestyle, and her family provided that for her.

Prior to COVID-19 delaying many events this year, Jorgensen and the group she trains with, The Bowerman Track Club, had been competing at inter-squad meets, and she had set a personal record in the 5K during that time: 15 minutes and 10 seconds. The U.S.A. Olympic Trials have been postponed until next year, as well as the U.S. Championship meet. “Everything’s on hold until next year,” she added.

With the national competition canceled, Jorgensen said she would be taking a brief break in her training before jumping back into a more serious regime in September, her sights set on the Olympic qualifier for running. She outlined what training looks like: “I wake up; have a hearty breakfast; get some stretching in, some activation; go for an hour, fifteen run; come home; have a snack; do gym for about an hour; have lunch; take a nap; wake up; run again for 45 minutes; have dinner; then go to bed. And repeat.”

“I’m waiting to see what will happen at the trials,” she said. “Hopefully they’ll happen next year.” Jorgensen added that she felt fortunate to be able to compete, and she hopes to show her son what can be achieved when you work hard and set big goals.

Jorgensen’s time on Mille Lacs has allowed her to work toward those goals, training out on the lake. But she added that her time in the community has also been one of her favorite vacations ever. “It’s been really relaxing,” she concluded, “and the water is something that will definitely draw me back.”