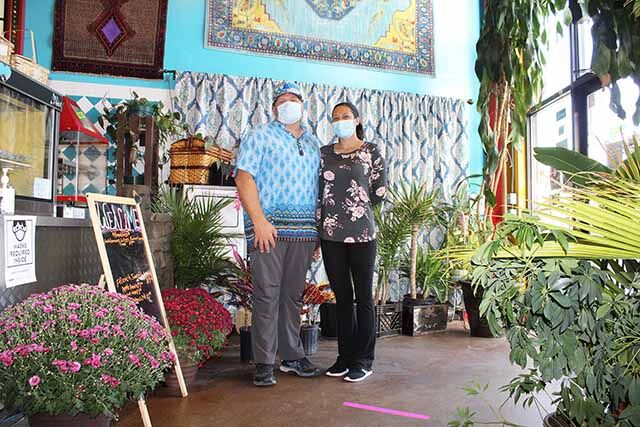 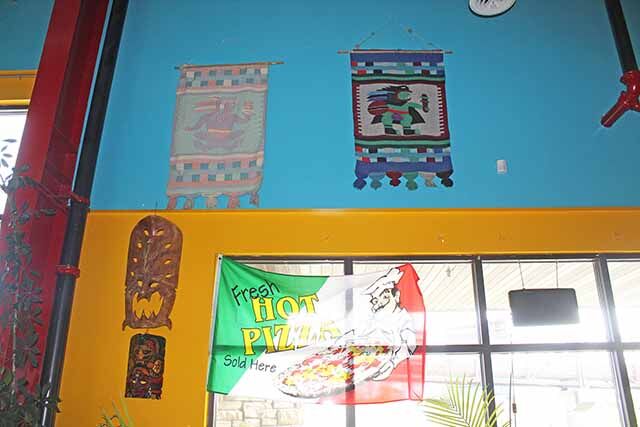 The store’s new decor reflects the pair’s multicultural vision for the eatery. 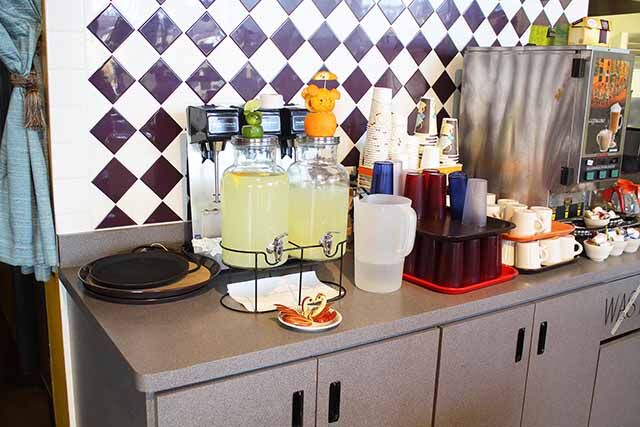 Angie’s brings her Filipino background to the pan-Asian cuisine now offered as specials, as well as her fruit sculptin.

The store’s new decor reflects the pair’s multicultural vision for the eatery.

Angie’s brings her Filipino background to the pan-Asian cuisine now offered as specials, as well as her fruit sculptin.

“Kumusta, pasok po kayo!” reads the sign inside the entrance at Angie’s Farm Market Cafe. As chef Angie Simons will explain, this is a tagalog greeting, “Hello and welcome.” And it is just one way Angie is bringing her Filipino heritage to the restaurant. She and her husband Randy purchased the Onamia restaurant in June, with financial assistance from the city council, and they have brought a new, multicultural vision to the eatery along Hwy. 169.

The Simons purchased the Farm Market Cafe on June 1, and the business reopened with its new Angie’s name as of July 1. “It took us a month to get it all organized,” Randy explained. “July 1 was our starting date with the Fourth right around the corner.” For that holiday, he said, the business was able to be open at 50% capacity, and the restaurant has operated at that level since. “With lots of outdoor dining available,” he said, noting that, as the colder fall weather continues, that option would remain available as long as patrons were willing to take advantage of it.

Randy explained that he first moved to Onamia in 1999 then started Randy Rentals, his cabin and fish house business along Mille Lacs’ west shore. He met Angie while travelling in the Philippines in 2008, and she moved to live with him on Mille Lacs in 2010.

Having been a frequent customer of the neighboring Agnew’s Hardware Hank in Onamia for many years, Randy said he happened to cross paths with the Farm Market Cafe’s former owner, Barb Eller, as she was putting the business up for sale. As he and Angie had been considering starting a restaurant to run alongside their resort for many years, Randy began working with Eller to purchase the site in May. The Simons negotiated with Eller to purchase the restaurant’s equipment. Randy credited Eller as both a huge asset and good friend for helping transfer the business over to him.

The Simons also approached the Onamia City Council at their May meeting for a loan towards the restaurant’s purchase, receiving $18,000 in funding.

Presenting his plan for the cafe before the Onamia City Council, Randy pitched a menu covering a wide variety of international offerings. Currently, the cafe’s core menu offers a mix of breakfast items, sub sandwiches, calzones, burgers, tacos, and burritos. Speaking on these offerings, Randy described them as being close to, if not 100%, set in stone.

However, on Fridays and Saturdays, the restaurant also offers a variety of changing specials. Examples have included ribs, pork chops, steaks, and spaghetti. “We’ve done just about everything,” Randy said, “to see what people really like on the weekends.” Angie explained that these weekend specials frequently include Filipino or Asian cuisine. She cited a multitude of examples, including traditional Filipino soups, Vietnamese pho and Mongolian beef.

Reflecting on her history with cooking, Angie explained that she began back in high school. Her sister had run a restaurant in the Philippines, and Angie would help alongside the rest of her family. Moving to Minnesota with Randy, Angie has also worked as a cook for several local corporations.

In the future, Randy and Angie hope to offer a revised menu that incorporates Angie’s Filipino and Asian dishes as regular items. The rotating specials serve to test the waters for which of these dishes customers are most interested in.

Randy emphasized that Angie’s Farm Market Cafe was multicultural, and this theme is reflected in the decor as well as the food. “When you sit at a restaurant and you’re eating,” Randy said, “you like to look around. And if you see neat things around, it can be a conversation starter.” Angie added that these globally-themed items all have a story based on the travelling she and her husband have done.

While the Farm Market Cafe previously focused on organic offerings, Randy noted that supply chain issues had required them to move away from the organic label. However, he added that the restaurant was still providing farm-to-table food using locally sourced meat and produce. He indicated that their pork comes from a farm in Hinckley, and their beef from a farm in Isanti, Chicken is provided by the Crazy H Farm in Milaca. Many of the vegetables still come from the greenhouse located on the premises, and Angie sources vegetables from farming friends in Stillwater, Minn.

In addition to the restaurant, Angie’s Farm Market Cafe also doubles as a clothing boutique. The Simons have been working with the neighboring Noblewear apparel outlet. Randy said there are numerous Noblewear products available for purchase through the cafe, and he hopes that customers will be able and willing to shop and look through these items after finishing their meals.

Thus far, Randy said, business has been steady, though he added the weekend evening hours tended to be slower. He emphasized that diners could come during these hours to participate in the cafe’s dinner specials. Angie, meanwhile, is strict in having her staff following COVID-19 safety guidelines, like gloves, masks, and sanitizing surfaces. Randy stated he is optimistic that the disease would not negatively impact his business in the coming months and that restrictions would continue to loosen. “We are going to follow the Governor’s guidelines,” he said “ … But I have a lot of optimism that things are going to get better.”

At nearly a decade old, the Farm Market Cafe’s organic food offerings have been an established brand among Onamia businesses. The Simons are exploring new territory as they take over that storefront, but, drawing on their cosmopolitan background, the couple is bringing their unique fare to Mille Lacs.