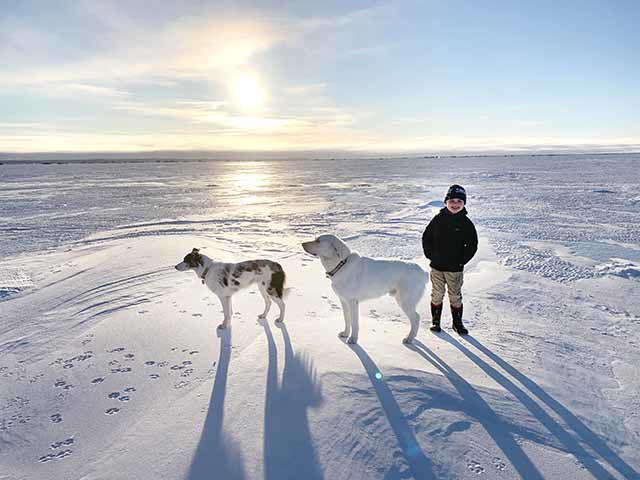 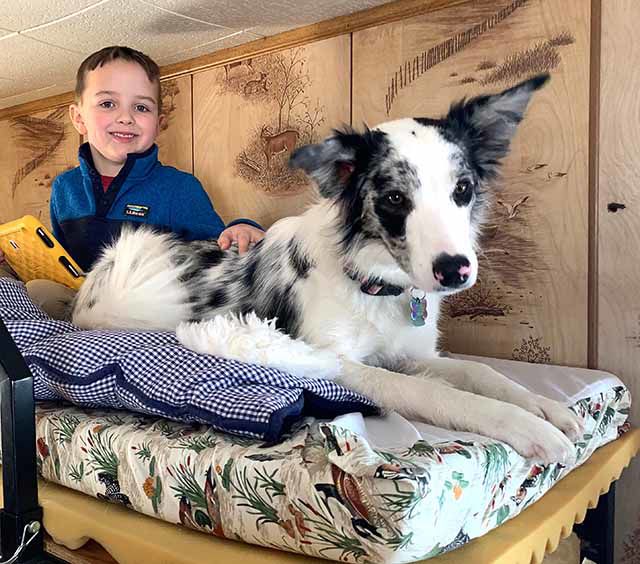 Henry and his dog, Millie, in their ice shack just before Millie disappeared. 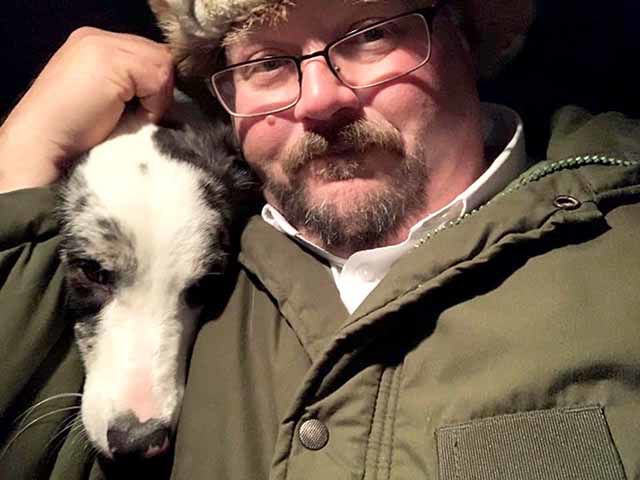 John Bjork and Millie shortly after their reunion. 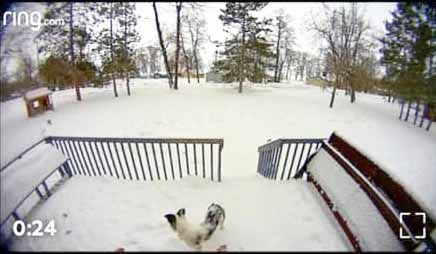 Millie is spotted on Cassie Baldwin’s security camera, out of Nitti’s Hunters Point Resort, Tuesday morning after she disappeared the Saturday before. 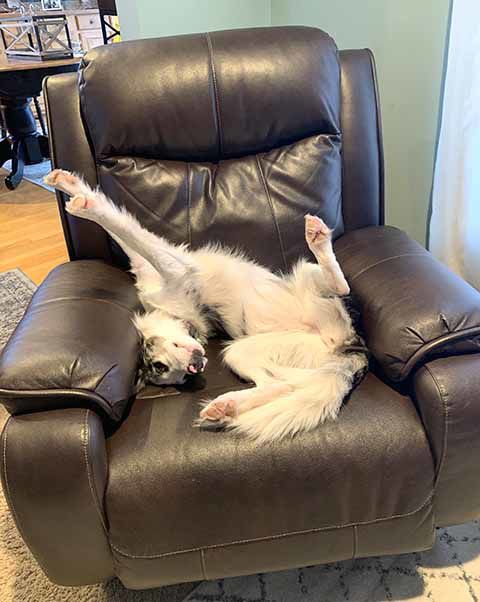 A very comfortable Millie safely back at her home in the Twin Cities.

Henry and his dog, Millie, in their ice shack just before Millie disappeared.

John Bjork and Millie shortly after their reunion.

Millie is spotted on Cassie Baldwin’s security camera, out of Nitti’s Hunters Point Resort, Tuesday morning after she disappeared the Saturday before.

A very comfortable Millie safely back at her home in the Twin Cities.

A dog owner and community who wouldn’t give up

Several missing dog stories from around the Mille Lacs area have been posted on social media–but none quite like the story of Millie.

John Bjork, an attorney from the Twin Cities, was ice fishing on Mille Lacs the weekend of Jan. 4 and got settled into his fish house with his 6-year-old son, Henry, and their two family dogs, Charlie and Millie.

John went outside the skid house with Millie, a 1-year-old border collie, and Charlie, a 3-year-old half lab/half samoyed. He turned his back to the dogs to start his generator, and turning back around, the dogs were gone. John immediately tried to call them back to the house.

Charlie returned but no Millie.

It was unusual for Millie to run like this. Leaving her companion has never happened as Charlie and Millie have always been together since she was a puppy. Maybe she got a glimpse of what she thought was a far off sheep or maybe she was spooked. It’s hard to know. Border collies are naturally herding dogs with unlimited energy and stamina, the kind of energy and stamina Millie would end up needing for the days to follow.

John continued to call out for Millie, going from shack to shack looking for her, but no one had seen or heard her. It was dark, being late evening on a Saturday, and they were two miles out on the lake. Henry was sleeping in the fish house, so John took to social media asking people to be on the lookout for Millie. John and Henry retired for the night hoping Millie would come scratching on the shack door. Thankfully, the temperatures were not frigid, John thought.

But morning came, and Millie was still gone. The search continued on the lake and shoreland. John expanded his plea for help on social media, posting on Wheelhouse Warriors and other Mille Lacs Lake Facebook pages. Many commented and shared, but no one had seen Millie.

So John, Henry and Charlie headed back to the cities absent of their beloved border collie.

They were about 15 minutes from home when John got a call from Nitti’s Hunters Point Resort, where the group had been fishing out of. They let him know that someone thought they saw Millie. John dropped off Henry, turned around and headed back up to Mille Lacs.

A man told John that they tracked her down about a mile south of where he had been fishing. They tried to call her, but she ran off toward the middle of the lake. The men followed her as far as they could go, but the ice three miles out on the lake wouldn’t be safe for them with the season’s unusual weather.

John found them and continued his search for her. It was now evening, and the search continued with flashlights. John updated his post which continued to be shared on social media. He stayed overnight at the lake to continue the search, but still nothing.

Having to get back to work and needing to attend a court case the next day, John headed back home. He placed a kennel, food and clothing that would have the family’s scent on it outside the ice shack in hopes Millie would return and be safe there.

The next morning on Tuesday, John got a call around 5:30 a.m. It was one of the guys who saw Millie on Sunday. They said they saw her again and tried to call but had the same results; she got spooked and ran away. Later at about 8:30 a.m. while John was in court, a woman called and said she also saw Millie come off the lake and run up a channel. Then Cassie Baldwin, from the resort, called and said she spotted Millie on her security camera.

John was able to get out of court at noon. “I have to go. You can’t just give up on your animals,” John thought. So he headed back up to Mille Lacs.

Justin Baldwin met him that afternoon at the resort saying they put food out on the deck so Mille would have something to eat to sustain her in the cold weather. John brought another kennel with bed sheets and more food just in case he had to leave it there and come home without Millie yet another time.

But in the snow were her tracks at the last location she was spotted. John brought Charlie with him this time in hopes that Millie would smell her canine companion. This time, the weather was getting more frigid, but John set out into the field, still in his work clothes. With his shoes packed with snow and fingers nearly frozen, he was forced to return to his vehicle to collect himself and warm up. Throughout the day, he updated his posts on social media with the shares continuing and strangers offering to bring drones and even an airplane to help fly over the lake to find Millie. People from all over the area were out searching for her.

The support from the community was overwhelming and not something John would have expected being the city folk that he was.

His phone rang at about 5 p.m., and a woman, Anne McMahon, said she was looking for Millie and saw her on the side of the road, but as soon as she opened the door, Millie ran off. John arrived to the location, and a pickup truck pulled up. The driver said he saw a black and white dog. But John thought to himself, “I am never going to find my dog,” as Millie had been elusive to everyone she came in contact with. Someone from the animal group called “The Retrievers” then told John not to call out to her and that dogs are often terrified when they are lost and get into a “blind panic mode,” not responding like they normally would.

Another hour of searching passed with multiple cars shining lights looking for Millie. Then another phone call came. Millie was spotted on a security camera again. But again, there was no Millie when John got there.

A lady who saw Millie earlier, Laurie Jorgenson, told John she had been following the activity on Facebook and said a little prayer that she would eventually help find Millie.

Another sighting was made. John arrived to find a man holding some snacks and meat for Millie, saying they have also been looking. Laurie and a friend pulled up, still not giving up on the search.

John let Charlie out and said, “Go find her Char.” Charlie picked up a scent and ran into a swampy area. After about ten minutes, John called out to Charlie to come back. They shined their lights up the road, and Laurie said, “There’s another dog with Charlie.”

There was Millie. John called out to her. She darted off again, but someone reminded him that when Millie gets close, to not call her name. They told him to drop down to the ground as she approaches, as any aggressive body language would make her more fearful. So John got on the ground and called out only to Charlie this time.

Charlie came right up to him, and behind him was Millie cautiously following. She approached John and sniffed his back. At that point, something flipped in Millie. Her animal brain turned off, and her companion brain turned on.

She jumped into John’s arms and licked his face as if he had just walked into the house after a long day at work. John clung to her, not about to let her go after the three-day ordeal. The ladies present helped John get Millie safely back to the truck.

John went back to the resort and got Millie and himself a much needed burger. He also updated Facebook to let people know that Millie was found. In the two hours it took him to respond to the numerous messages, people let him know that it was the “best thing that happened all week” for them and that “they were in tears when they heard the news.” They were invested in this. So many in the community were. Millie wasn’t just John’s dog, but became everyone’s dog, and everyone needed a happy ending. Something good to come from these long and cold January days.

Millie was hungry and thirsty but had no signs of frostbite. Her inherent herding nature and immense amount of energy fared well for her during those three days. She was reunited with her family back in the Twin Cities who were thankful to those in the Mille Lacs community who went the extra mile and to their dad who kept his promise when he said, “I’m going to find her.”

Thanks to the relentless efforts of a community, and a man who wouldn’t give up on his best friend, Millie slept well in her warm bed that night.