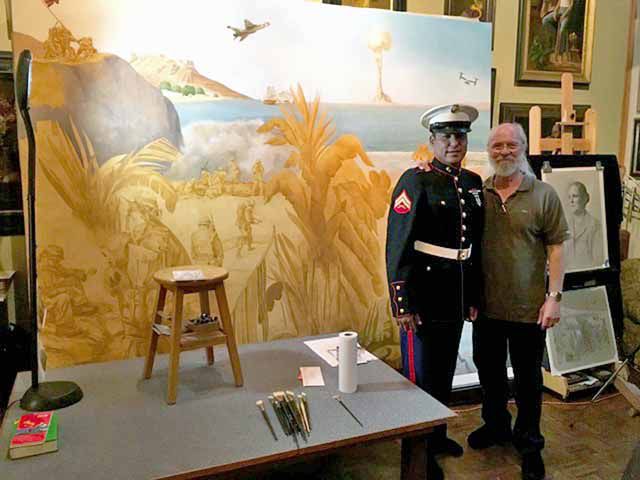 At the artist’s studio

Quintin Sam took a moment to pose for a photo while at the Little Falls art studio of Charles Kapsner who is creating a mural showcasing each of the branches of the military to be on display at the Minnesota State Cemetery in Little Falls. Kapsner begins each painting in sepia tones and adds layers to give depth. 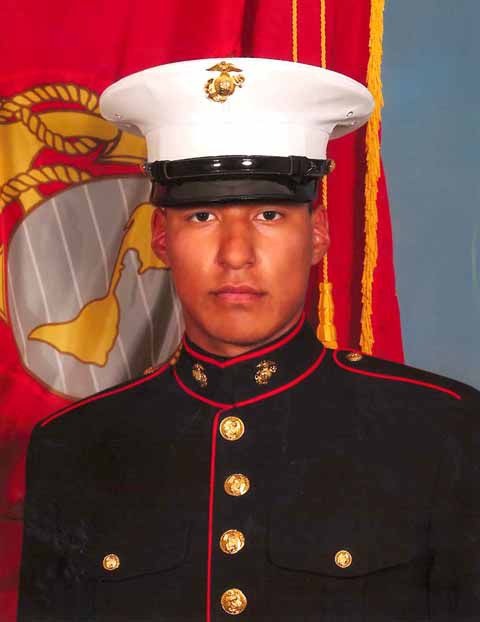 At the artist’s studio

Quintin Sam took a moment to pose for a photo while at the Little Falls art studio of Charles Kapsner who is creating a mural showcasing each of the branches of the military to be on display at the Minnesota State Cemetery in Little Falls. Kapsner begins each painting in sepia tones and adds layers to give depth.

Serving in the Marine Corps, serving his community and serving as a model for a historic military mural at the Minnesota State Veterans Cemetery

As a graduate of the Nay Ah Shing class of 2005, Quintin Sam knew he was destined for something big. It doesn’t get much bigger than enlisting in the United States military, and he knew from a young age he wanted to be a U.S. Marine. He has recently been chosen to represent the Marines in a historical bigger-than-life art exhibit of the U.S. military to be displayed at the Minnesota State Veterans Cemetery near Little Falls.

Sam took his Armed Services Vocational Aptitude Battery test at the age of 17, before he graduated from high school. By December 2005, he found himself in San Diego at the Marine Corps Recruit Depot for Marine Corps basic training.

Moving from Minnesota to California away from family and friends did not affect his easy-going attitude. “Home is where your heart is,” he said with his trademark smile.

Sam has been known to crack subtle jokes and barely crack a smile – until he is sure the punch line was delivered appropriately. His wit and charm were not dismantled by the strenuous and highly disciplined routines of Marine Corps boot camp. That didn’t mean he didn’t take it seriously.

“I learned a lot – about people in general and about myself,” Sam said. And he learned the art of timing. He learned not only the timing of when to say what, but also the need to be on time. “Yeah, you could not be late. Everything was precise,” Sam said.

Choosing the Marine Corps versus other military branches was not a decision he made lightly, but it was one he just knew was going to be a good fit for him. “I wanted to be a part of a branch of service that was something more. I really wanted a challenge,” Sam said. “I just always knew I wanted to be a Marine.”

Sam served in the U.S. Marines from December 2005 to November 2011. At the end of his enlistment period, he was a sergeant. “Yeah, my dress blues have two stripes on them. I just never got around to putting the third stripe on,” Sam said humbly. “I suppose I should sew it on I guess.”

Going from private to sergeant is not always easy. In fact, Sam said it was hard at times. “The worst, or I should say, the biggest challenge was the cold weather training,” Sam recalled. That training involved a lot of hiking through snow covered mountains carrying packs that weighed in at 80 - 100 pounds. Sam said, “We had to work as a team and cross a frigid, I mean ice cold, river, with the current rushing and water up to my chest. You get in that water, and you forget everything. It was like needles hitting your skin.”

He is not small in stature. In fact, he stands at 6 feet tall. That height may have given him an advantage in his chosen military career as a heavy equipment engineer and diesel mechanic. While attached to a motor-T platoon, he had the opportunity to work on some “pretty cool” military equipment including but not limited to the likes of the High Mobility Multi-purpose Wheeled Vehicle, known to civilians as the Humvee.

According to Sam, each branch of the military is important, and each job within that branch is significant. He is proud to have served his country as a U.S. Marine.

Sam has been working at the Mille Lacs Band Government center in the Chief Executive Office for quite some time. After he left the Marines, he said he wasn’t entirely sure what he wanted to do with his life. He considered re-enlisting. “It was a tough transition coming home,” Sam said. “I was used to always doing something, to always being on time and working on something.” But he quickly became involved serving the Mille Lacs Band community. He and some friends formed a drum group called Timber Trails and have been singing together for many years. He also devotes a lot of time to volunteering and working with kids in the after-school open gym at the District 1 Community Center.

When asked what advice he might give to young kids regarding military service, he replied, “It is a big decision they would have to make on their own. They have to know what is right for them. It can’t be because someone they know is doing it. That decision is theirs alone.”

Having now been home and out of uniform for several years, he was surprised when he received a phone call from Monte Fronk, Mille Lacs Band Emergency Services Coordinator, asking if he would represent the Marine Corps by posing in his dress blues for a mural at the Minnesota State Veterans Cemetery.

“Yes, I was surprise,” Sam said. “Monte and I met with the artist, Charles Kapsner, and talked for a while and I said yes. It would be an honor.”

Sam humbly accepted. He didn’t tell anyone. He just began going to Kapsner’s studio in Little Falls and posing for the mural.

When complete, the project at the state cemetery will be five 8- by 10-foot murals representing branches of the military. The paintings depict the stories of the men and women of the U.S. military and include both active duty personnel and veterans. The hall already displays completed paintings for the Army, Navy and Coast Guard. Kapsner is currently working on the Marine painting, and the Air Force painting will be the last one completed. Each painting has taken approximately 18 months to complete.

“I focus on one painting at a time,” Kapsner said. “I think it keeps the project pure.”

Sam has had several sittings with Kapsner at his studio. “He said to bring my dress blues. I was a little worried because it had been a while since I put them on,” Sam said with a grin. “They don’t stretch. Boy, those buttons were screaming.” Sam chuckled at that and rubbed his belly, laughing even harder.

Kapsner said he has worked on several military projects over the past 30 years or more. “I am very honored to do it,” he said. History has a long list of military artists dating back to the beginning of time, Kapsner said. “Those soldiers doing battle on the front lines centuries ago made sketches and paintings of what they saw. That is how history of the military was first recorded.”

He is currently applying the underpainting for the Marine Corps mural. “I start in sepia and add layers,” Kapsner said. “It gives the paintings more depth and shadows.”

Kapsner said his good friend Chuck Lindberg went back to Hiroshima and brought back some of the soil from Mt. Suribachi. The soil will be crushed and added to the paint to become part of the painting’s depiction of the Marine flag-raising there in 1945.

The Marine Corps mural is expected to be complete in the spring of 2018. Once completed, it will be on display for a brief period in Duluth before being permanently placed at the Committal Hall at the State Veterans Cemetery in Little Falls, the last place many families spend with their loved one before they are interred. The cemetery is located across from the historic Camp Ripley.

“I am honored to be a part of this project,” Sam said. He humbly continued, “I wasn’t going to tell anyone about it. I was just going to do it. I think having a way to honor veterans is cool, and I really am honored.”

For more information on the project check out Charles Kapsner’s website at http://www.buonfresco.com/cgk/. Also visit Vetsart.com.

Camp Ripley is a 53,000-acre military and civilian training facility operated by the Minnesota National Guard located near the city of Little Falls in the central part of the state. The location of the camp was selected in 1929 by Ellard A. Walsh, Adjutant General of the State of Minnesota. The site’s winter warfare training course is the primary facility used by the National Guard for winter combat exercises. Camp Ripley also hosts the training academy for the Minnesota State Patrol and is a popular site for athletes training to compete in winter biathlons. Most Minnesota Guard soldiers train at Camp Ripley during two-week annual training periods.

The camp is a state game refuge with resources managed cooperatively by the Department of Military Affairs and Department of Natural Resources. It also houses the Minnesota Military Museum, a museum that is open for the public and military personnel. Also on the grounds is the site of Fort Ripley, a military post established in 1848—the second ever built in Minnesota—to keep the peace among the Dakota, Ojibwe, and Ho-Chunk people.