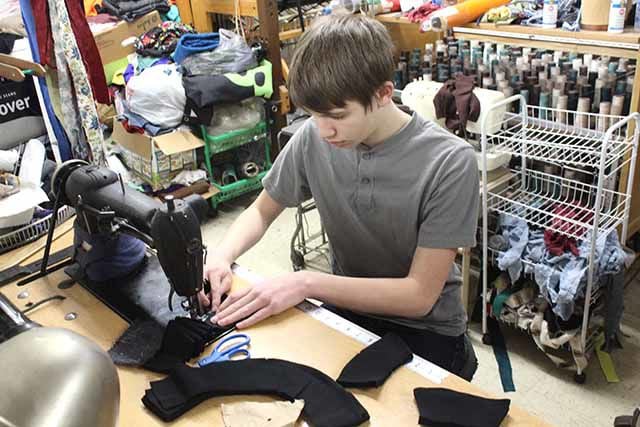 As part of his work for the Someday Isle store, Elias Beamish has been manning the store’s sewing machine, creating small bags to hold glasswork and jewelry. 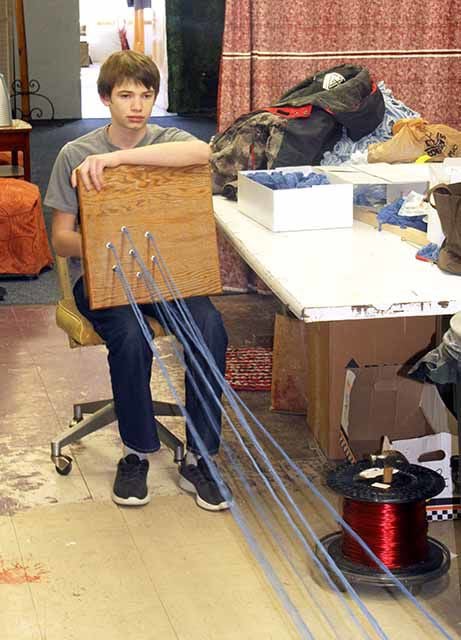 For the past month, Elias Beamish has been hard at work winding 1,000 cords for an order.

As part of his work for the Someday Isle store, Elias Beamish has been manning the store’s sewing machine, creating small bags to hold glasswork and jewelry.

For the past month, Elias Beamish has been hard at work winding 1,000 cords for an order.

The early teenage years are often the time when most youngsters get their first break working a job. For Elias Beamish, that’s held true enough. Some may recognize Elias for his father, Jason Beamish, whose metalworking is a prominent feat of local artistry, samples of which are available at the Someday Isle store on Isle Main Street. Elias has followed in his father’s footsteps, it seems, as the last few months have seen him joining the Someday Isle team, doing work where he’s needed.

Store owner Angie Moen praised the work she had seen from Elias. “I told him before he started that my one criteria is reliability,” She said. “And he has been 100 percent reliable.”

In addition to the store’s connection with his father, Elias has had past experience with Someday Isle. He has previously helped with the store’s gathering of milkweed pods, as part of an initiative to help preserve monarch butterfly habitat. Moen noted that Elias had expressed interest in coming to the store, but when Elias was asked where the interest originated, he couldn’t say with certainty. “I ask myself that as well,” he said.

Elias started his work at the store in September of 2019, and he has participated in a number of projects since then, such as making paper from various materials, including jean fabric and sewing bags from polo fleece. Last month, the Someday Isle store received an order for 1,000 cords, and Elias has been hard at work winding them. Currently, he is about halfway through the order, creating about 56 cords a day. The cords, Moen explained, are made from repurposed materials, and the company who ordered them will be taking them to make pouches for “healing stones.”

Moen also noted Elias’ ingenuity. When he started, he had been doing around 20 cords a shift. Since then, he had brought in new ideas and methods for streamlining the process, nearly tripling his output. “The work leads you to get deeper into it,” Moen said, “and it’s been a good creative outlet for him.”

While he has done miscellaneous craft projects in the past, including helping his grandmother and working on school projects, he hasn’t pursued it as a hobby. Through his work at the store, Elias has started to pick up the skill of sewing. He has also done several sewing projects through school, though he noted it was a completely different sort of sewing machine at the store.

Elias is currently a student at Isle High School, now in the ninth grade. Elias does have plans for the future, though he’s currently uncertain how feasible they are. “When I grow up,” he said, “I hope to be a theoretical physicist.”

While Elias has the whole of his high school career ahead of him yet, his position at Someday Isle has provided ample opportunity to develop practical skills, problem-solving ability, and work ethic. If his output is anything to go by, he’s already shown a great deal of initiative.