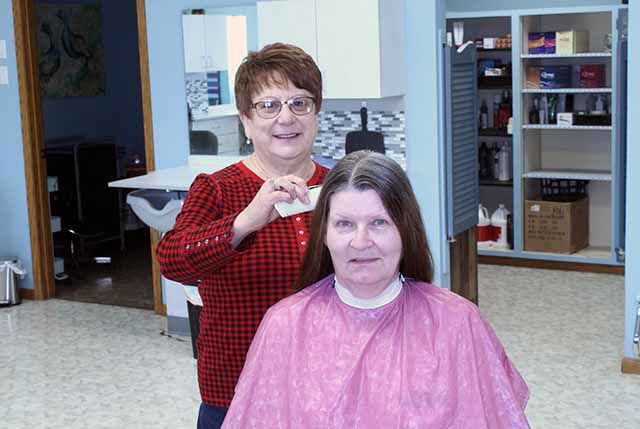 With scissors and comb

Denise Mickelson brought decades to her work as a hairdresser, here putting her skills to use for local Sherry Iaquinto. 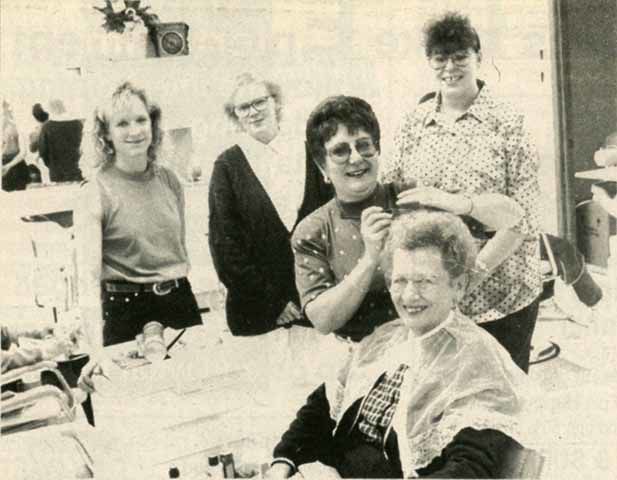 Denise Mickelson works on the hair of Lucille Christensen, accompanied by co-workers Julie Benson, Sue Roeschlein and Lola Larson. The photo was taken in September 1992 when Your Personal Touch salon first opened.

With scissors and comb

Denise Mickelson brought decades to her work as a hairdresser, here putting her skills to use for local Sherry Iaquinto.

Denise Mickelson works on the hair of Lucille Christensen, accompanied by co-workers Julie Benson, Sue Roeschlein and Lola Larson. The photo was taken in September 1992 when Your Personal Touch salon first opened.

Working as a hairdresser, one makes a lot of personal connections, chatting with their clients. For Denise Mickelson, the relationships she built working as a hairdresser were the favorite part of her job. Though Mickelson has now retired as of the start of this year, her 47 years on the job have put her in touch with many Isle locals, and having worked at a variety of local salons, she has seen both the town and her industry change and grow,

Mickelson officially retired from JJ’s Shear Beauty as of Dec. 27, 2019. She had been at the salon since it first opened its doors in 1992, then called Your Personal Touch, and saw it change hands between several different owners. Even before Your Personal Touch, the whole of Denise’s 47-year hairdressing career has been at various locations in Isle.

Mickelson’s first position in Isle was at Isle of Beauty, owned by Geri Corron, in 1972. At the time, Mickelson said, she didn’t have her license yet, so she spent her first two weeks working on wigs. Mickelson recalled she was with Isle of Beauty for a short time, then joining Patsy Schweich when she opened Magic Mirror, another salon located in the basement of what is now the Oberfeld Insurance building.

Eventually, Palmer Berge bought Isle of Beauty and asked Mickelson to come run the shop for him. During this time, she worked with Lola Larson, who would go on to start Your Personal Touch in ‘92.

Mickelson recalled that her interest in hairdressing was first inspired by a family friend, Jeannie VanderHeyden, who regularly did work on Mickelson’s sister and mom’s hair. “It fascinated me,” she said. She attended beauty school in Robbindale for 10 months, because she felt more at home working in the small town environment.

“It’s a much slower lifestyle here,” Mickelson said, “and you get to know people more personally.” Mickelson has worked with some of her customers for 30 years and other customers whose family she worked with for three generations. “That’s probably what I liked best about the job,” she said, “the personal contact with people, helping them and making them feel better.”

These friendships were also the aspect of the job Mickelson felt she would miss the most. “You get to know your customers,” she said. “They’ll tell you things they wouldn’t tell anyone else. We always joked that we were the bartenders of hairdressing … We could talk about personal things, about faith, whatever was on their mind. And they could feel it was confidential. They didn’t have to worry about it.”

The biggest challenges of her work came from grappling with changes in the industry. The chemicals, the hairstyles and the equipment changed throughout the years, Mickelson said. “The demands of the industry have changed too,” she added. “Years ago, women came in weekly to get their hair done. Now it’s more maintenance, perms, haircuts, and colors.” At the same time, Mickelson has also had customers whose hair she has worked on every Friday morning for 30 years. “I’ve been lucky. I’ve had a lot of faithful customers who I’ve really bonded with,” she said.

Denise also recalled that salons she worked at used to attend hair shows in the city, but eventually those events became so big that they no longer felt relevant to their small town business. Instead, for the last several years, the shop has brought in someone on-site to do classes to keep the stylists up to date.

As for her retirement, Mickelson aims to spend time with her family. “I love to read. I like to do puzzles,” she said, “and work in the yard during the summer.” She is also hopeful she and her husband, Stan, might be able to travel. Mickelson has looked into options to get herself out into the community several times a week, like respite care or the grandparent program at the school. “I can’t see myself sitting on the farm every day of the week,” she said.

She also suspects she and Stan will stay local. “He and our boys run the farm together, and they’re edging in to taking over the farm. And then we’ll be like grandma and grandpa were when we started it,” she said.

“Working that many years with Jamie [John], Lola, and Dave Goldsmith in the barber shop, we were like a big family,” Mickelson said, “and we still are very close.” Mickelson noted that she’s liked the continuity and how interconnected the various people she’s worked for have been. She extended thanks to all the customers she’s known through the years, as well as work family, people like Jamie, Lola, David, and others, who had been there for years. “For all the good times,” she said, “and helping through the bad times. We’ve had a lot of good times together.”