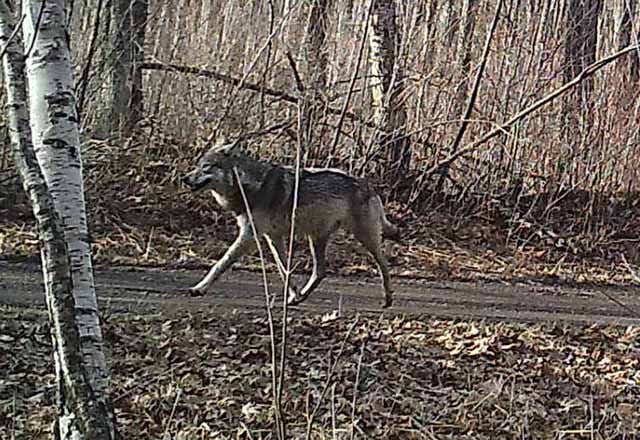 This wolf was captured on a trail cam in the Mille Lacs Wildlife Management Area south of Onamia. 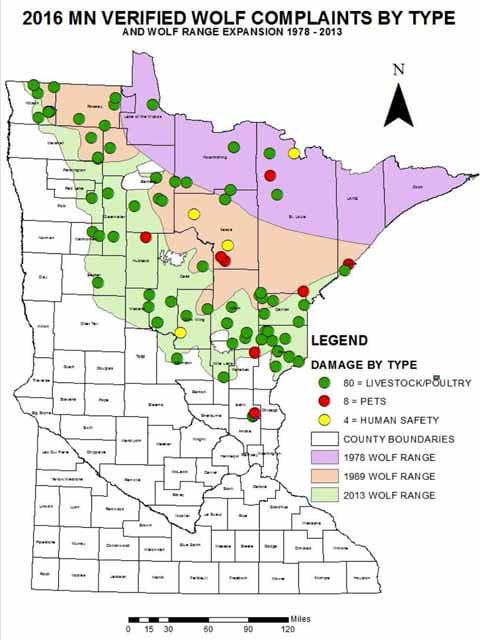 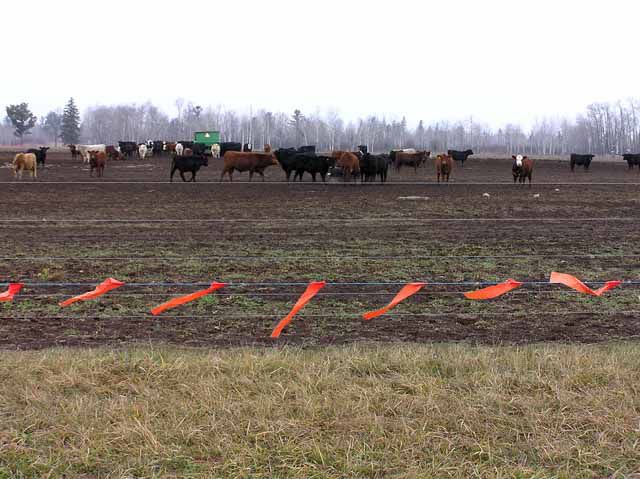 Turbo fladry, a series of electrified wires and colorful streamers, has shown some effectiveness in reducing wolf depredation.

This wolf was captured on a trail cam in the Mille Lacs Wildlife Management Area south of Onamia.

Turbo fladry, a series of electrified wires and colorful streamers, has shown some effectiveness in reducing wolf depredation.

Minnesota is home to the largest population of wolves in the lower 48 states. In 2016, a Minnesota Department of Natural Resources study estimated the population at 2,300 wolves. Compared to neighboring states like Wisconsin and Michigan, each with about 750 wolves, Minnesota reigns as the home to the most wolves this side of Canada by a long shot.

As federal protection has helped rebound the once nearly extirpated canine, wolves continue to expand their range in Minnesota, reclaiming much of the territory they held before European settlement.

“They are out there, dispersing and looking for a new place to set up shop,” John Hart, district supervisor with the United States Department of Agriculture in Minnesota, said.

Wolves have been recorded in the Mille Lacs area with some regularity since the mid-1990s, specifically in Aitkin County, but their population has grown and expanded here since the early 2000s.

Wolves are very territorial. Once a pack develops a home range, outcast wolves looking to start their own packs have to find new ground, thus expanding their presence southward.

Data suggests that what may have once been transient wolves in and around Aitkin County in the early-1990s is now multiple established packs throughout the area, extending as far south as Milaca and Ogilvie.

The pattern of wolf depredation on the landscape has slowly moved south and west, occupying more of Kanabec, Mille Lacs, Morrison and Crow Wing counties.

During the most recent two years of available data, 2015-2016, there were confirmed wolf depredations in Page, Kathio and Eastside townships within Mille Lacs county.

In Minnesota, the gray wolf is listed as threatened under the Endangered Species Act. As a threatened species, private citizens are not allowed to kill a wolf unless it is in direct defense of a human life. In the case of a livestock kill, removal of the offending wolf is legal only if conducted by an enlisted federal trapper.

Minnesota currently does not practice relocation of wolves, so trapped wolves are euthanized.

In Wisconsin, the wolf is listed as endangered, so even trapping is prohibited in circumstances of depredation.

“We’re having to depend solely on 100 percent non-lethal methods,” David Ruid, assistant district supervisor with USDA, said. Ruid manages wolf depredation throughout the state of Wisconsin. With trapping unavailable to him, he’s had to try an array of non-lethal methods with varying degrees of success.

“Often times, what you run into is you prevent the losses on one farm, but then the farm one mile away starts having losses,” Ruid said.

He said it can be frustrating being successful at stopping depredations on one farm only to find that the offending wolves have started taking calves next door.

Among the most common non-lethal methods are electric fencing, fladry (a series of colorful streamers that wave along a fence line) and triggered radio collars.

On some farms with recurring depredation, the Wisconsin DNR has set up noise-making devices that can be triggered by a remote radio collar. Once they identify the pack that has been preying on livestock, they tranquilize and outfit one of the alpha animals within the pack with the radio collar.

When the wolf then enters the pasture, the collar triggers the nose-making device in hopes of scaring the pack away.

Ruid said he believes that quick, selective removal of depredating wolves is probably the most successful approach to managing wolf issues on the farm.

With regards to non-lethal management, Ruid said the best option so far seems to be turbo fladry. Turbo fladry is a combination of streamers installed in conjuction with an electrified wire. The fladry seems to make the wolves slow and cautious, and the electric fence shock acts as a deterrent if the animal touches it.

Ruid said that trials of turbo fladry and high-tensile electric fence have shown marked drops in livestock kills, but the installation expense is high and requires frequent maintenance.

One method of protecting livestock from predators is the use of guardian animals. Guardian dogs, not to be confused with herding dogs, have been bred and raised to live as part of the flock or herd they are protecting. Beyond dogs, a few other domestic animals, including donkeys and llamas, have been found to be effective as guardians.

Roy Habeck, of Isle, had calves taken by wolves as recently as 2012. Since then, he has added donkeys to his herd and has not suffered a depredation since their introduction. Currently he is running about a half dozen donkeys with his eighty head of cattle.

“Before we got donkeys, we had lost about 3 or 4 calves,” Habeck said. “One time all I found was a leg.” Habeck has been pleased with the success. “I’m still surprised at how good they work,” Habeck said.

Explaining why he chose donkeys over llamas or dogs, Habeck said, “A llama will keep coyotes away, but donkeys are a little more aggressive and are needed for wolves.” Habeck wanted a livestock guardian animal that he could feel safe having his children around. He isn’t concerned about his daughter working with her cattle in the presence of their donkeys.

Donkeys are known to be aggressive towards canines and will use their teeth and hooves when attacking encroaching wolves.

Since wolves in our area are more commonly seen in packs, it is probably wise to consider having more than one guardian animal so that it doesn’t get outnumbered by a pack.

With federal protection being upheld, wolves will likely continue their spread across central Minnesota.

“A wolf in Mille Lacs county can’t really go north, because all of the range is already occupied with wolves,” Hart said. However, Hart doesn’t expect any large populations of wolves to establish themselves much further south than Hwy. 23 near Milaca and Ogilvie. “There typically isn’t enough cover down in those areas,” Hart said, pointing to higher human population and more intensive agriculture.

But there are exceptions to every rule. After a wolf pair gave birth to a litter of pups in the Cedar Creek Ecosystem Science Reserve near East Bethel, southern Isanti county became home to an established pack – the furthest south recorded in Minnesota since well before federal protection was enacted in the 1970s. Conflict quickly ensued, and Isanti county soon had six wolf complaints, three attacks on cattle and three on pets. During the summer of 2016, federal trappers removed six wolves from the area. It is unknown how many remain.

As wolves continue to rebound and establish near human activity and agriculture, ranchers and wildlife officials are going to have to continue working together to find solutions to protect farmers’ livelihoods.