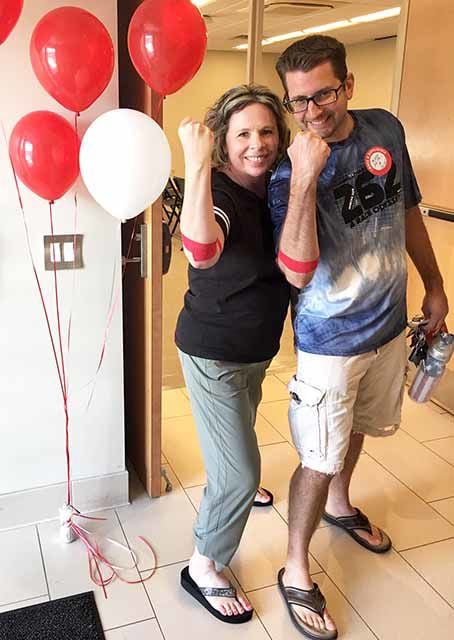 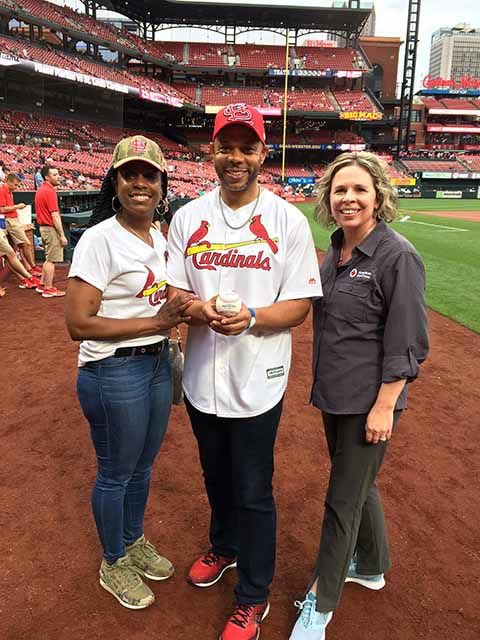 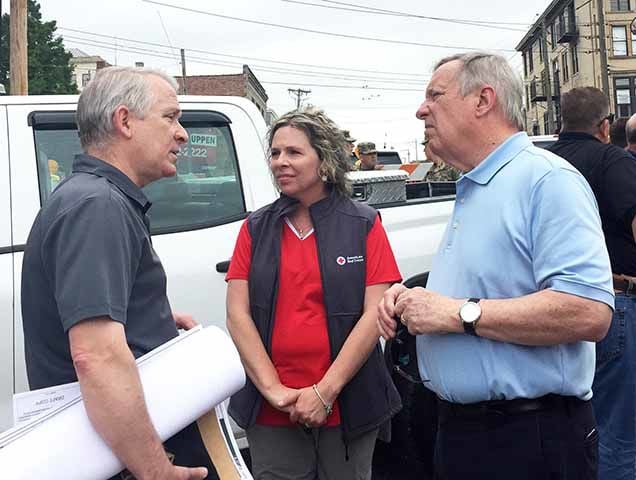 Mary Jane Thomsen is pictured here with Senator Dick Durbin (right), at a response to a flood in Alton, Ill.

Mary Jane Thomsen is pictured here with Senator Dick Durbin (right), at a response to a flood in Alton, Ill.

Former local speaks on her leadership role in the St. Louis chapter

When people hear about the Red Cross, this humanitarian organization’s name may bring both blood donations and disaster relief to mind. In the midst of a pandemic afflicting nearly two million Americans and affecting countless livelihoods, the Red Cross continues to provide aid, and a local name is helping organize its efforts. Mary Jane Thomsen is a former Isle High graduate, and she now serves as executive director of the Red Cross’s Greater St. Louis chapter.

Thomsen graduated from Isle High School back in 1990. Attending the University of Minnesota Duluth to continue her education, she ended up pursuing an interdisciplinary studies degree in communications, journalism and technical writing, which she received in 1995.

After her schooling, she began working at an executive office suite in Minneapolis, where she performed administrative support for dozens of clients. “It’s where I first learned to do PowerPoint, Excell, all those types of early Microsoft office applications,” she explained. In 1997, she moved back to Duluth and began working with a local non-profit blood center, where she stayed for 10 years.

During her time with the non-profit in Duluth, Thomsen worked as an account manager, coordinating with area blood drives to supply local hospitals. The area she covered in this role stretched over a third of the state, up from Duluth to Grand Portage and International Falls and west to Grand Rapids. This region also included communities in northern Wisconsin. Throughout these territories, Thomsen worked with churches, civic organizations, schools and businesses, connecting with a blood drive coordinator who then helped gather local donations.

In 2006 she and her husband, Mike Borough, moved to St. Louis, and continued her career working in non-profit blood banking. In this role, she managed teams of individuals doing what she had done in Duluth. In 2010, she officially started her work with the Red Cross, and she now holds the executive director title with the Greater St. Louis chapter.

Role of the Red Cross

Thomsen observed that many people associate the Red Cross with disaster relief, and that is a huge part of what the organization does, along with biomedical services. Biomedical services account for 40% of the nation’s blood supply and 80% of the supply in the St. Louis area, Thomsen added. However, less commonly known is the service the Red Cross provides to individuals in the armed forces, including active military, their families and veterans.

The Red Cross is chartered by Congress to do two things, Thomsen explained, respond to disasters and provide communications to the military. She said that the Red Cross is the only non-government agency with access to military personnel, allowing families to get messages to their loved ones in the service during times of family difficulty or other situations they may need to know about. In cases such as a family member who is ill or dying, or when there is a birth in the family, the Red Cross is able to inform family in the military and, oftentimes, bring them home. Thomsen also noted the Red Cross provides services to veterans.

The Red Cross is known for preparing and responding to natural disasters on a national scale, and 90% of their workers in these cases are volunteers.However, Thomsen also noted that the most common type of disaster the Red Cross responds to are daily crises, Thomsen said, such as circumstances where a local family has lost a home to fire. Red Cross volunteers help the family through the first hours after the loss, providing comfort and care and helping them find a hotel. Items such as blankets, comfort care kits, or stuffed animals for children are given to the families, as well as financial assistance in the form of donor dollars towards food and shelter.

With the impacts of the pandemic still being felt, Thomsen explained how the Red Cross was both adapting and responding to the current situation.

Where disaster response was concerned, Thomsen said this aid was conducted via a remote work environment when possible. “We can’t be handing individuals items, such as blankets or comfort care kits,” she said. She also noted the great relationship the Red Cross had with local fire departments, who are able to direct those in need to the organization. Financial assistance, in the form of client assistance cards, is provided. When individuals with the Red Cross are deployed to an area, they will often be working from hotel rooms or bring supplies to designated drop-off sites while practicing social distancing measures.

As for blood donation, stringent guidelines are in place to make sure all donors remain safe throughout the donation process. These practices are in place from when a donor first presents to give blood, the mini physical they receive beforehand and the actual needle stick and recovery. Thomsen listed enhanced practices, which includes taking temperatures of staff, volunteers and donors and requiring those individuals to wear face masks, providing hand sanitizer and asking that paperwork be done electronically to decrease handling. Social distancing is also in place throughout the process, including the entry, donation and refreshment areas. The refreshments provided are now individually wrapped and sealed, and donors are asked to self-serve to decrease contact with volunteers.

“It goes against everything the Red Cross does,” Thomsen said. “... Our volunteers want to help and do things for people.” However, she added that the Red Cross is process-orientated and has been doing a good job of adapting to the new process the pandemic requires.

The closing of facilities at the start of the pandemic led to a massive loss in blood, Thomsen explained. “Large facilities, schools and churches, they can often bring in 50 to 150 units of blood,” she said. Exacerbating this issue is the shelf life of blood products, with red cells lasting only 42 days. Individuals can only give blood safely every 56 days, Thomsen said, per FDA regulations. Throughout the first weeks of March and into April, there were blood shortages throughout the country. Citing specific numbers, Thomsen said that 25,700 blood drives have been canceled since March, resulting in 700,000 fewer blood donations.

To counteract this shortage, Thomsen said, the Red Cross worked with other organizations that could open up their doors. She also added that state, county and city governments have been willing to deem blood collection an essential service. The messaging throughout this period, Thomsen said, was that there was not a lack of available healthy donors, but a shortage of facilities for donation. As work has continued to find venues for blood drives, Thomsen said presentation has been great. As the Red Cross moved through the month of April, the blood supply has started to stabilize.

Thomsen noted that, continuing into June and July, there will still be a need for donors to present, as blood cannot be stockpiled due to its short shelf life. In addition, the Red Cross is also making long-term plans in order to adapt to changing circumstances and help people in need. “We typically prepare and plan for the worst,” she said, “and ensure that the safety of all is protected.”

Thomsen noted her mother, Beverly, and step-father, Kieth Severson, still live in the Isle area, and her sister and husband in Wayzata. She said she still occasionally makes it back to the community for Christmas.

“One of the things I was fortunate to do was grow up in a small town, and I wouldn’t trade it for anything,” Thomsen said. She benefited from being able to grow up close to her large, extended families. Her upbringing gave her transferable skills in building relationships in a community, which lends itself to her organizational work. “I’m grateful to the community of Isle for being part of my upbringing, and I’m appreciative of everything I learned and the friends and family I have there.”

Another ongoing effort within the Red Cross, like other blood collecting organizations, was the collection of convalescent plasma. Thomsen explained that this plasma has historically been used to treat new diseases when developed without other known treatments. Convalescent plasma contains antibodies for these diseases, such as COVID-19, from those who have recovered. Use of this plasma, she said, can be a life-saving treatment option for those suffering from COVID-19. The Red Cross has been testing for these antibodies since April, and these tests will simplify the eligibility process for collecting convalescent plasma from eligible donors.

Thomsen said those who have fully recovered from COVID-19 are encouraged to sign up to give convalescent plasma through the donor form on the Red Cross website: http://www.redcrossblood.org/plasma4covid.