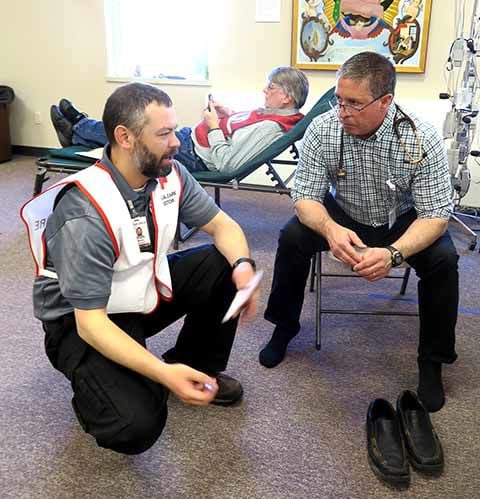 Dr. Arden Virnig consults with an ER doctor from the Mobile Medical Team. 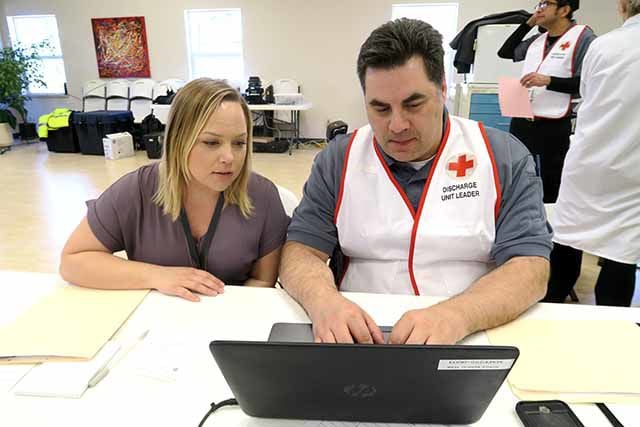 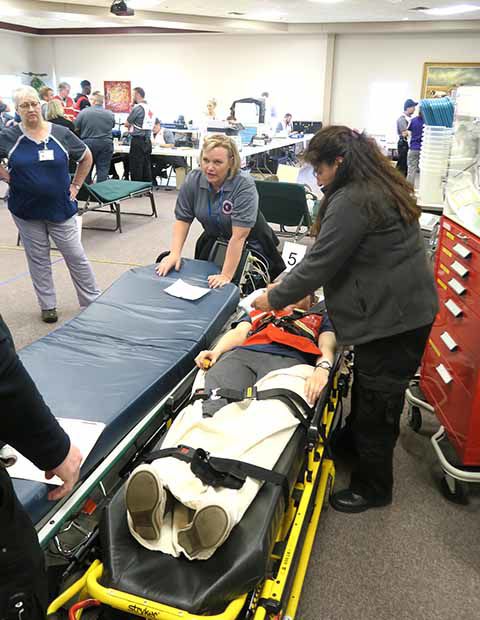 Dr. Arden Virnig consults with an ER doctor from the Mobile Medical Team.

Disasters of any kind don’t just happen to other people who live where we don’t live. They can occur anywhere in our country and are not just associated with weather.

Disasters, natural and man-made, come in many forms and have many variables. But one thing that stays the same is the need for swift help. And most of the time that includes emergency medical assistance.

On Tuesday, April 16, Mille Lacs Health System participated in a disaster drill with the Minnesota Mobile Medical Team (MMT) at Holy Cross Center on the MLHS Onamia campus. The team is a group of volunteer medical and support professionals who have received training and practice in providing acute medical care in a mobile field environment. Volunteers at the event, who work at jobs as doctors, nurses, EMTs or in other hospital jobs, came from all over Minnesota for the drill.

The MMT volunteers respond to facilities that have a situation where they have limited staff or facility damage. MLHS hosted a drill where the medical facility needed assistance due to a mock influenza A outbreak. The outbreak of influenza provided the group with a scenario of limited staff and an large influx of patients.

Don Sheldrew, who works as a Regional Healthcare Preparedness Coordinator at CentraCare and is the Central Region Healthcare Coalition Coordinator, served as the Incident Command Officer for the event. Sheldrew said it is the first time the group has had a drill that was integrated with a hospital. Previously, drills have been set up at alternate care sites. “But we needed something to take it to the next level. I thought right away of Mille Lacs Health System because talking with the point person here, Vicki Engmark, I knew this had a good chance to be successful and the facility had all the characteristics we needed.”

High school students from Osseo and Spring Lake Park school districts who were in an Opportunities in Emergency Care educational program acted as “patients.”

Some “Just In Time” training was delivered, which utilizes a guiding and facilitating on-the-go model for instances where all volunteers may not be proficient with all tasks or equipment. For instance, a nurse at the drill was instructing Tanya Pelzer, an office employee in health information at MLHS, how to look for signs of acute distress in a patient who was waiting for evaluation.

The MMT brought trailers full of every type of emergency assessment equipment, such as cots, life support equipment, lab equipment and other supplies. Mock patients that were triaged (evaluated) got treated for ailments ranging from minor to life-threatening.

There was a buzz of serious efficiency as nurses, doctors and others tended to the various patients with varying degrees of medical complexity and even arranged a mock transport via MLHS ambulance. MLHS’s Dr. Virnig, taking a break from examining “patients” said, “There are many levels of care and details we’re dealing with. It can appear a little chaotic at times, but that’s how we work through it all. It’s really great practice for everyone involved.”

After the event was over, a “hot wash” ensued, where all involved had a chance to voice concerns about what needed to be done better and to give feedback about elements of the drill that went exceptionally well.

“We’ve done things here today that we haven’t had the opportunity to experience before,” Sheldrew said at the gathering of 45-plus people who participated in the drill. “Because of that, we all learned so much about how to integrate skills with this hospital and the Mobile Medical Team. This is how we continually make this process better.”