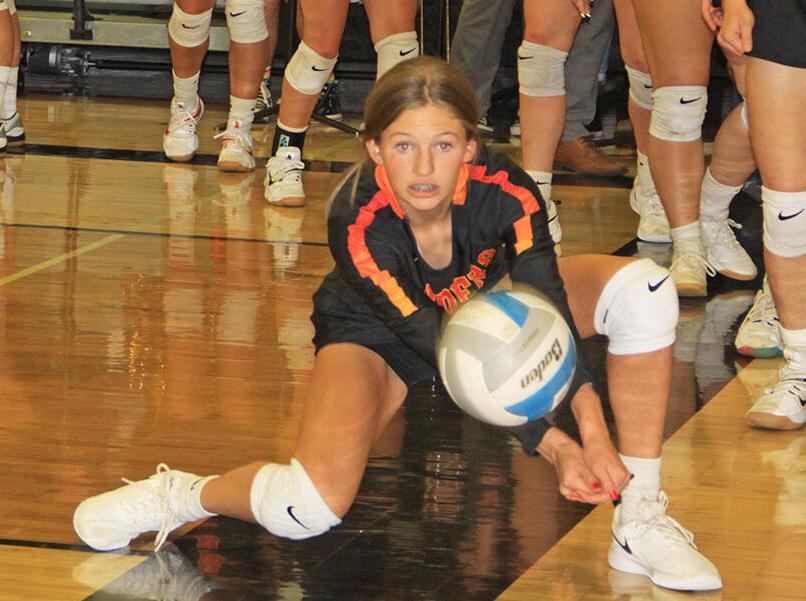 Isle sophomore, Katlyn Schoeck, improved her volleyball skills well enough to, at times, break into the starting line-up for the Mille Lacs Raiders. 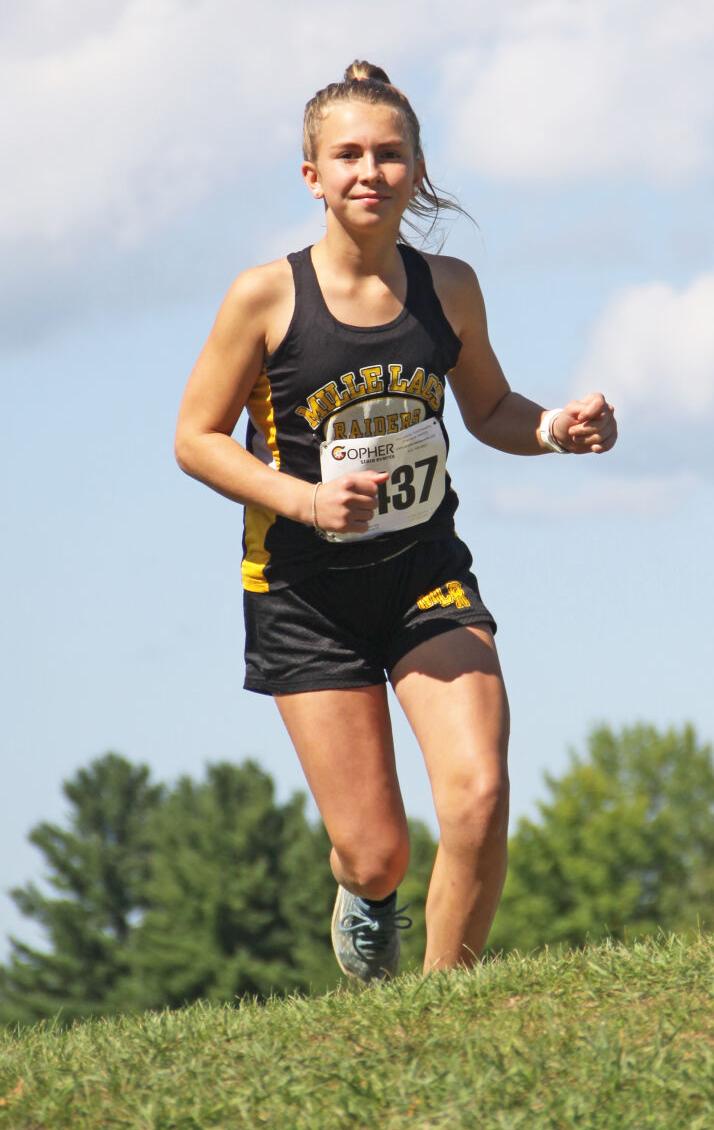 Star on the rise

7th-grader Abby Skogen will be a runner to watch after the superb showing she turned in during past cross-country season where she finished in the top 10 practically every junior high race. 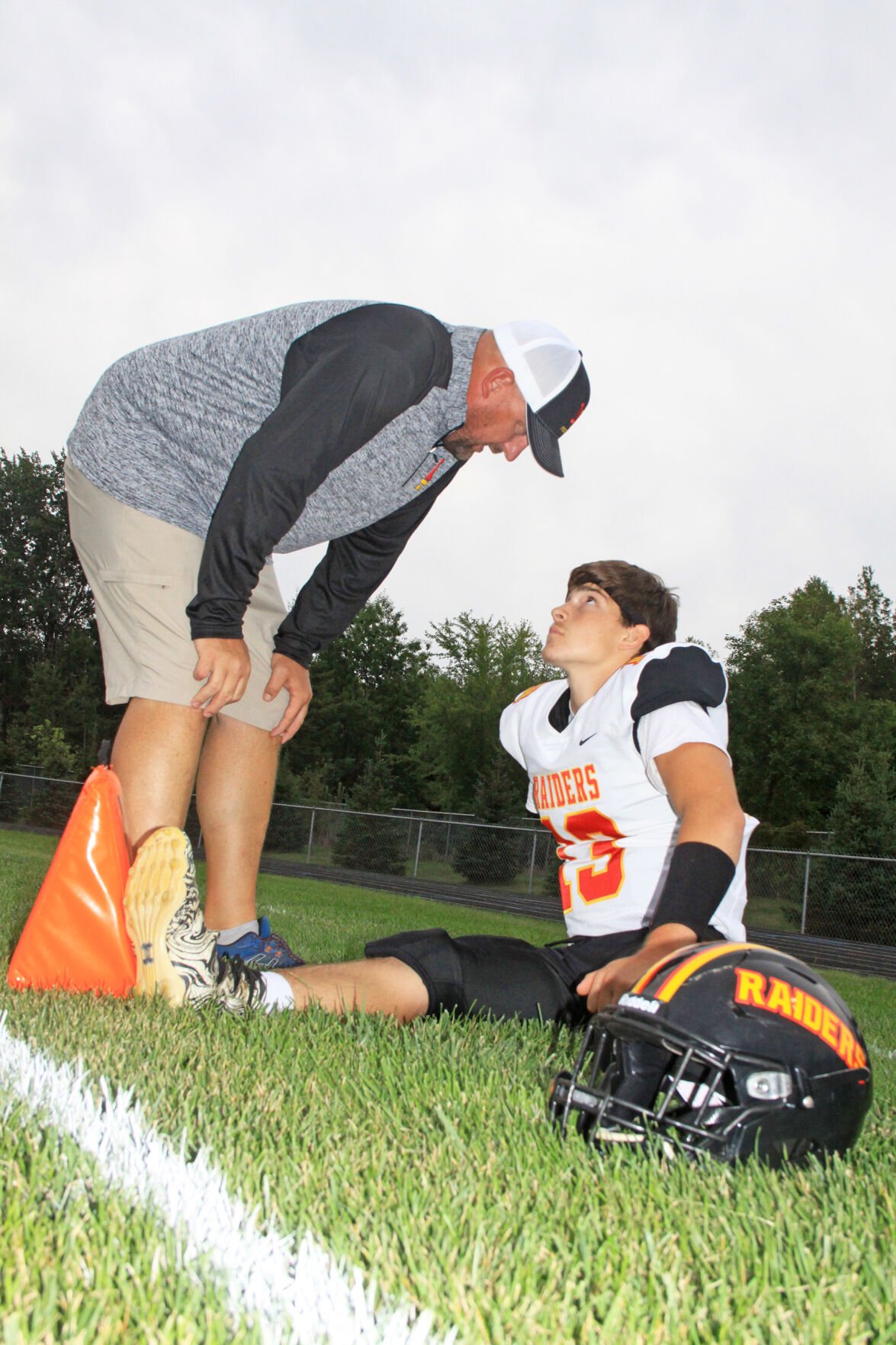 Prior to every game, first-year head coach Jim Henrickson gave encouraging advice to each player. 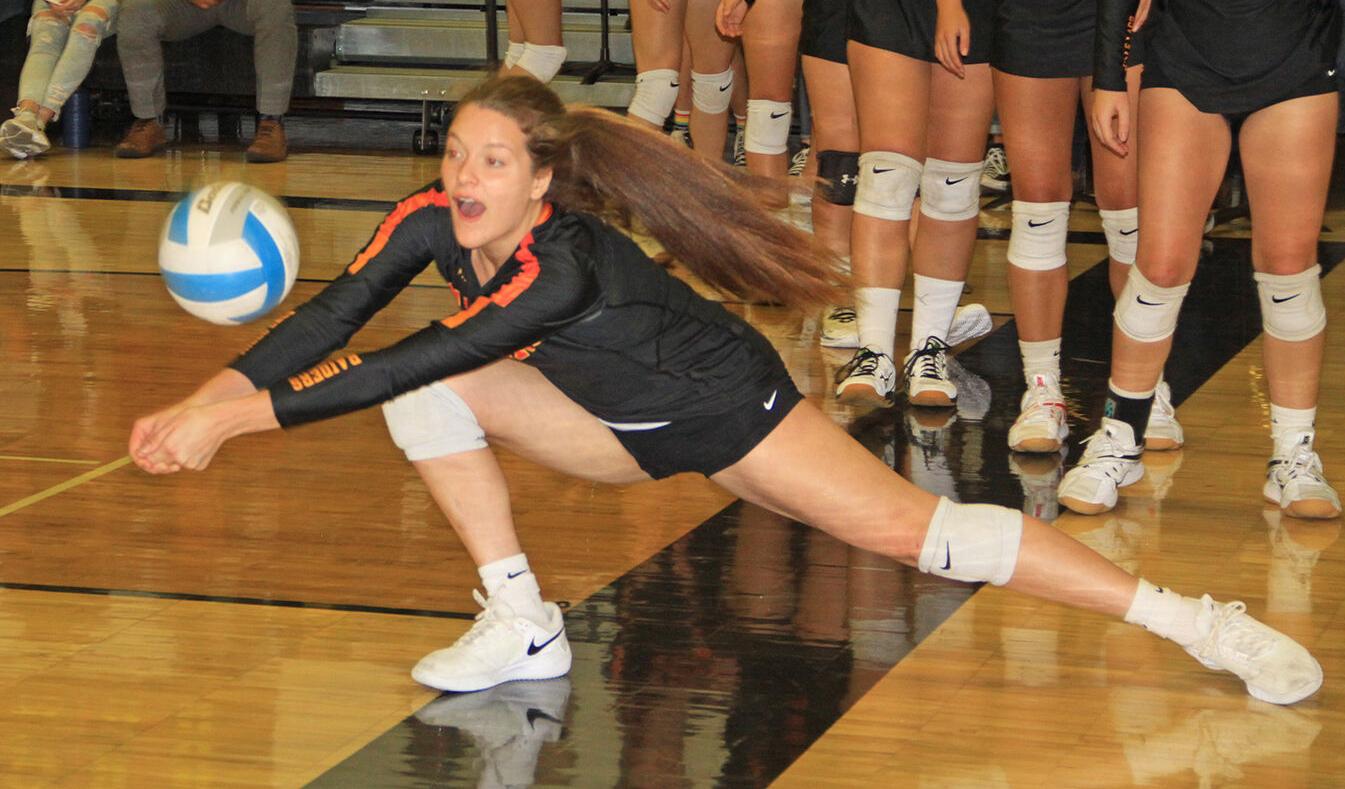 The Mille Lacs Raiders all-around best player, Ashley Strang, is set to return to the line-up next season as a senior to help anchor another solid team.

Isle sophomore, Katlyn Schoeck, improved her volleyball skills well enough to, at times, break into the starting line-up for the Mille Lacs Raiders.

Star on the rise

7th-grader Abby Skogen will be a runner to watch after the superb showing she turned in during past cross-country season where she finished in the top 10 practically every junior high race.

Prior to every game, first-year head coach Jim Henrickson gave encouraging advice to each player.

The Mille Lacs Raiders all-around best player, Ashley Strang, is set to return to the line-up next season as a senior to help anchor another solid team.

With the completion of the first fall season of complete pairing among the Isle and Onamia High sports teams competing as the Mille Lacs Raiders, a bit of reflection:

CROSS-COUNTRY — Although this pairing has existed over the past two decades with various success stories, this season, as in the recent past, the Mille Lacs Raiders were not able to field a complete 5- or 7-person team at the varsity, junior varsity or junior high levels. But, with the few athletes that did participate as individuals, there were two major stories that emerged.

First, and foremost was the successful year turned in by Onamia senior Molly Saboo, who not only dominated the races run in Great River Conference meets, but for the first time in her career, she qualified for the state Class A Cross-Country Meet by finishing ninth among the 99 runners in the Section 5A meet.

Her earning a spot at the state meet marked the first time since the fall of 2008 that the Raiders have had a runner qualify for the big dance.

The other surprise story of the fall in cross-country was the performances delivered by the girls on the junior high squad. Three junior high gals, Abby Skogan, Liz Schleis and Sarah Litz asserted themselves as up and coming stars in this sport by finishing well in nearly every race in which they competed.

So, with the graduation of Saboo, the youngsters in the cross-country program have sparked some interest as being athletes to watch down the road.

What the program really needs now is to have several more girls step up and join the team in 2022.

To say there was some controversy about pairing the Isle and Onamia volleyball programs may be an understatement. But a look at what transpired this fall as compared to what was taking place with the two separate programs ought to solidify the decision to combine squads.

Although Onamia has had a history of contending for the conference title during the past 20 seasons, even winning the title as late as last fall, they were looking at fielding a team with just two seniors and two juniors this coming season without pairing. And Isle High has had a decent number of girls come out for the sport, but has had trouble in the win-loss column over the past decade or more averaging under five victories per season, including just one win last fall.

So, with a core group of Isle girls joining a young Onamia’s bunch, the two teams were able to find some success, finishing the year with a combined record of 14-14, including an opening-round victory in the Section 5A Tournament.

Anyone who watched the development of the Raiders varsity team witnessed their strengths and their weaknesses.

The team had only three seniors, and two juniors which in itself was a harbinger of what was to come, because that forced them to use freshmen and sophomores, and even an eighth-grader at times to fill in the spots on the six-person team on the floor.

But, with this mix of veterans and newbies, the Raiders started the season on a positive note and at one time, heading into the second week in October, Mille Lacs had a record of 8-1, not counting tournament games, and were leading the Great River Conference with a 4-0 record.

But tragedy struck during the second week of October when the Raiders lost their number-one setter to an ankle injury, which in many ways proved to have an impact on team chemistry throughout the remainder of the fall as they struggled to find someone to fill that vacancy.

But those who watched the Raiders perform, could also not help but notice the improvement from the young players as the schedule progressed. Several young Isle and Onamia athletes  proved themselves more than capable to play at the varsity level.

A few of those youngsters worth watching were Jenna Carlson, Katlyn Schoeck  and Faith Larson of Isle and Brooklyn Orazem and Ava Rogers from Onamia High. Carlson, just a 9th-grader, proved to be a quality player anywhere on the court, from serving, to digging to hitting, and Schoeck, with her height and natural athletic ability, looks as though she has the potential to be solid hitter as she grows older. Larson, only a sophomore is quite athletic, and 9th-grader Orazem and 8th-grader Rogers saw some varsity action.

The team’s leading scorer, Ashley Strang, along with the team’s starting libero, Abby Biniek, who turned in a solid year in the back-court, will be back as seniors to solidify the Raiders squad.

And possibly the best setter in the conference, Ashley Rogers, will hopefully be recovered from her leg injury in time to return to her star status in the front court and back-court as a superb server.

Last season, the combined won-lost record of Isle and Onamia football teams, who were playing in the 9-man format, was two wins and 13 losses.

One of Onamia’s wins was against Isle, and with full disclosure, Isle’s winless, 0-6 record may have been better had they been able to play their first two scheduled opponents, both of whom had to cancel out of their games.

And both Isle and Onamia, going it alone last season, were scrounging to scrape together enough bodies to field their 9-man squads.

This fall, the two schools were able to field 32 players on their roster early in the season, but they had to experiment at key positions because of lack of experience and ended up winning just once, essentially the same combined record they had last season, only this time they were competing in the 11-man format.

The good news is this: the combined teams seem to like their coaches and each other, those returning will have one year of experience under their belts and the fact that over 50 boys grades 7-9 are out for the sport bodes well for the program.

The Raiders will remain competing in the 11-man format, and with the same coaching crew should show signs of improving in the won-loss column.