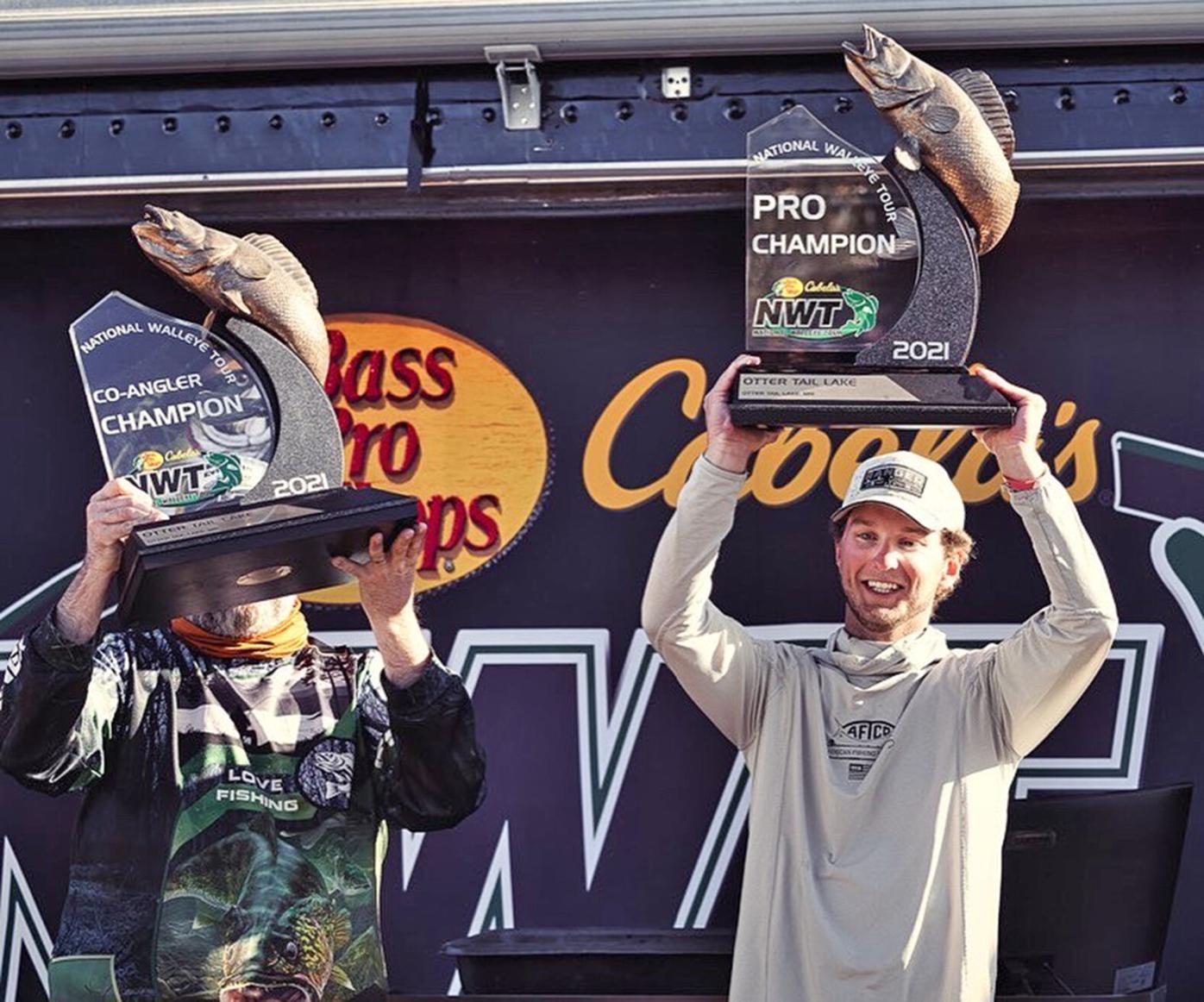 Eric McQuoid, of Isle, has grown up on Mille Lacs fishing the pro walleye circuit with his father, Kevin, and has now won his first championship. 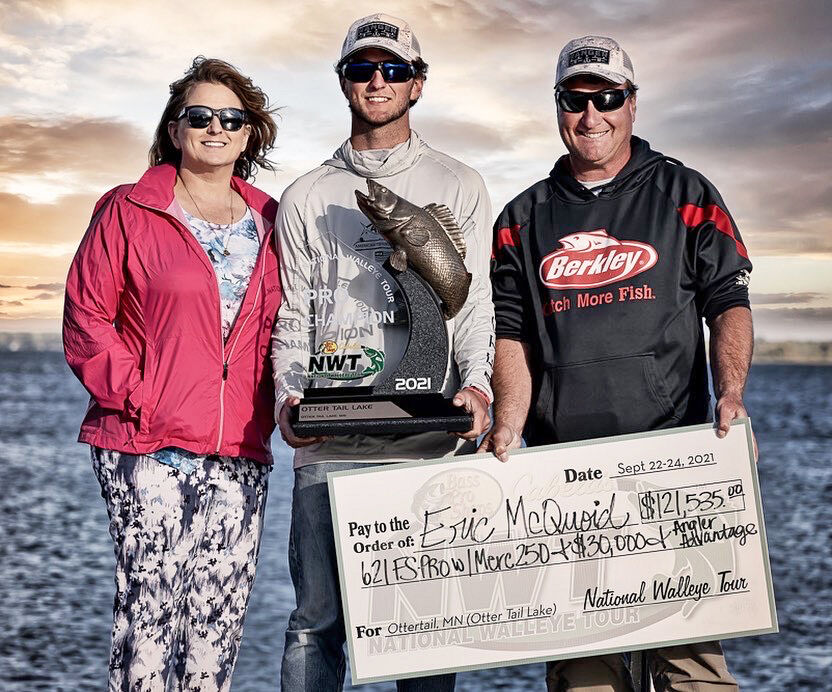 Karen and Kevin McQuoid with their son, Eric. 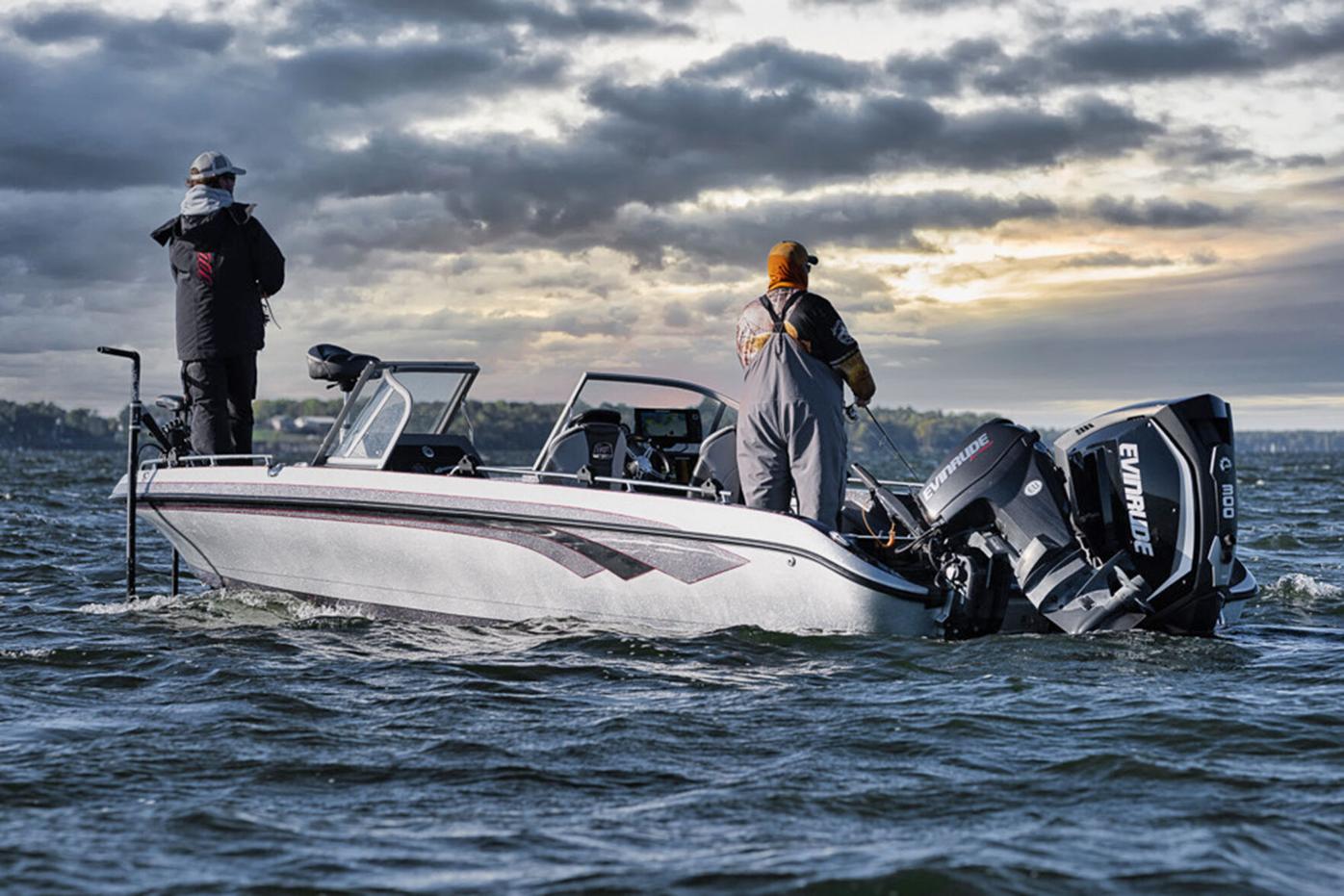 Whether on Mille Lacs, or the other tournament waters, Ottertail Lake in this case, McQuoid has a knack for finding and catching walleyes. 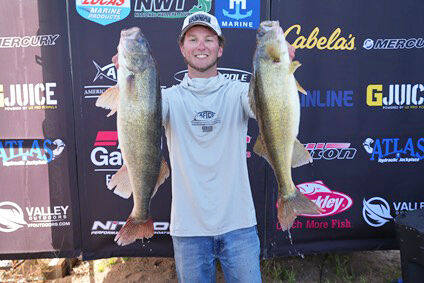 McQuoid hoists his two big fish from day two that propelled him into first place.

Eric McQuoid, of Isle, has grown up on Mille Lacs fishing the pro walleye circuit with his father, Kevin, and has now won his first championship.

Karen and Kevin McQuoid with their son, Eric.

Whether on Mille Lacs, or the other tournament waters, Ottertail Lake in this case, McQuoid has a knack for finding and catching walleyes.

McQuoid hoists his two big fish from day two that propelled him into first place.

Fishing against the best of the best in the walleye fishing world, Eric McQuoid of Isle won the National Walleye Tour (NWT) championship on Ottertail Lake Sept. 22-24. McQuoid ran away with the tournament with a winning three day bag total of 58.55 pounds. McQuoid brought in over 13 pounds more than second place finisher Tom Huynh.

With the championship win, he became the youngest pro in NWT history at 21 years old.

Going into the tournament, McQuoid said he was feeling pretty confident even though he struggled during the five days of pre-fishing. “Practice was tough for me; I only averaged about two fish per day and only one over 20 inches,” said McQuoid.

The top forty qualifying pros are eligible to fish the championship tournament. Based on a point system, pros accumulate points with each of the qualifying tournaments earlier in the season.

McQuoid went into the championship ranked 11th overall. Pros draw a different co-angler to be their boat partner for each day of the tournament. Culling (sorting fish) is allowed in the tournament, and the best five fish are brought to the weigh in. Minnesota state fishing regulations still apply though, so only two of the five can be over 20 inches in length each day.

This is McQuoid’s first season as a pro angler, a “rookie” as they’re called. But McQuoid is far from a rookie. He’s been fishing tournaments with his well known dad, Kevin, since he was eight years old as the co-angler. So he’s basically grown up on the pro walleye circuit. “I want to credit my dad; I’ve learned a lot from him over all these years, especially how to stay calm and to fish what your confidence is,” McQuoid reflected.

Day one dawned with a south breeze and sunny skies. Even though his practice fishing was tough, McQuoid went into it thrilled to be there and pulled out an impressive bag of five walleyes that went 16.12 pounds, just .04 pounds shy of first place, but had a fish die and was penalized .5 pounds to move him back to fourth overall after day one.

On day two, the weather held and McQuoid had a stellar day on the water bringing in a massive 23.72 pound bag that averaged almost five pounds per fish. But the best part of the bag was two giants: a 28.5 inch walleye that went over nine pounds, and a 26.5 incher that went over six pounds. The other three fish were just under the coveted 20-inch mark.

With that bag, McQuoid’s total skyrocketed him into first place with a seven pound plus lead. Day three dawned noticeably colder, and the wind had shifted into the Northwest, and by afternoon was blowing at a pretty good clip. This would usually have anglers changing their tactics due to the now post frontal conditions.

But this did not deter McQuoid; He picked up where he left off the day before and delivered another big bag weighing 19.21 pounds to put the frosting on the cake. This bag also included two big walleyes that were both in the six to seven pound category.

While a lot of the competition went ultra shallow, with some fishing less than six feet of water, McQuoid fished a little deeper targeting 8-16 feet. He looked for humps and knobs and fished in the weeds and on the weedlines.

Unlike the competition, he did not use any live bait. Generally in the fall, a jig and a big minnow – like a chub, can’t be beat. But McQuoid had other plans and chose an aggressive jigging tactic that has in some ways re-invented the walleye world in recent years. Using his electronics to spot individual fish, McQuoid used a Acme Hyper-Rattle (a lure that stemmed from the vertical jigging that is generally associated with ice fishing) in a perch pattern to coax them into striking.

“Sometimes they would come off the bottom just to look at it, so you would have to impart some different actions to get them to bite.” he said. As for the 9.5 pounder he caught, he said, “I saw it on the bottom, and I must have made 20 casts to it before it bit.” Asked if he fishes while looking for fish, he said, “I never made a cast until I spotted a fish.”

Another amazing stat from the championship was that McQuoid caught 14 of the 15 walleyes that were weighed in.  His co-anglers only caught one fish that made it to the scale. It was caught on a live chub.

For winning the biggest event in walleye fishing, not only does he get to enjoy the prestige of competing – and beating – the best of the best, but he also took home a prize package worth $121,535.00, that’s comprised of a Ranger 621FS Pro boat with a 300 horsepower Mercury outboard, plus $30,000.00 in cash and $1,540.00 in Anglers Advantage money.

When asked about the win, McQuoid summed it up, “It hasn’t sunk in it. It’s just so amazing it’s hard to find the words for it. I couldn’t have written a better script for my rookie season. I’m never going to forget this.”

With this win, McQuoid has made an indelible mark on the world of professional walleye fishing, and obviously has a very bright future in the fishing industry. Currently a junior at Bemidji State University, he’s pursuing a double business major and has recently purchased a house in the area. So congratulations Eric, and thanks for making the Mille Lacs area proud!