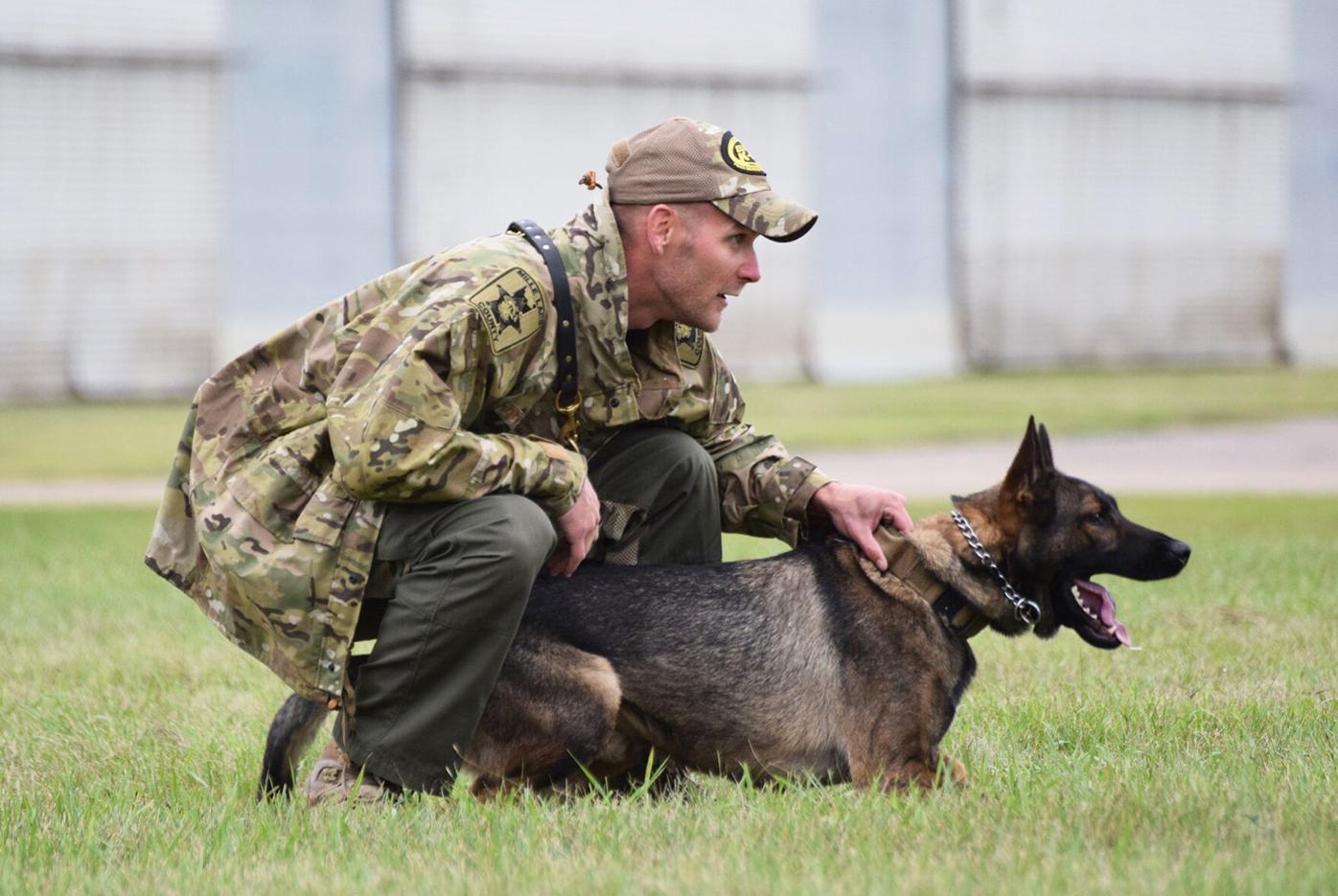 Pictured above is Greco, with his handler Sergeant Aaron Evenson. 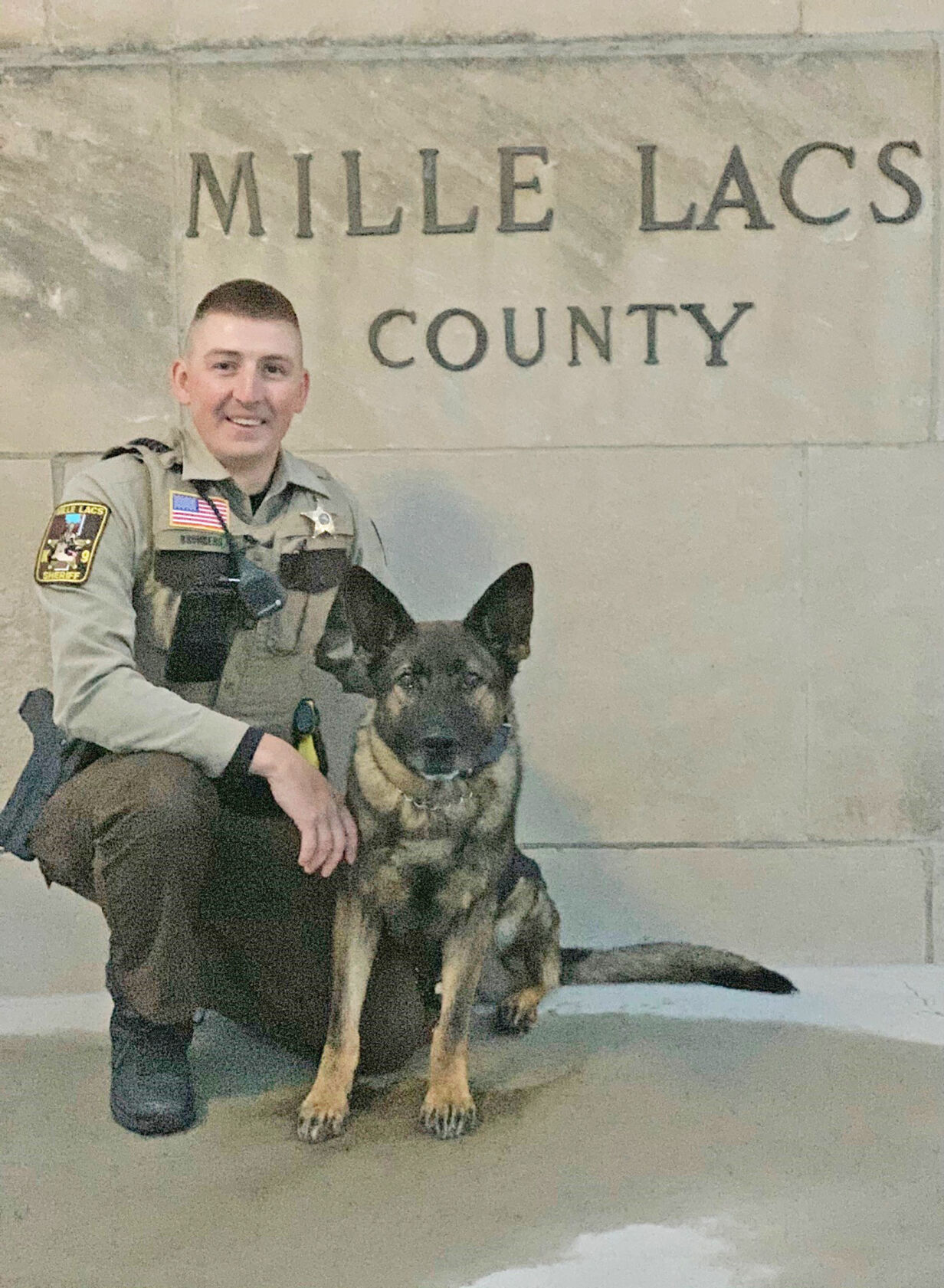 Pictured is Bongo, with his handler Deputy Andrew Bromberg.

Pictured above is Greco, with his handler Sergeant Aaron Evenson.

Pictured is Bongo, with his handler Deputy Andrew Bromberg.

The Mille Lacs County Sheriff’s Office is looking to raise money in preparation for replacing two dogs, and one dog handler, for it’s canine program.

The office is starting the first phase of the fundraising push, putting out messaging to local businesses to support.

“We generally get the largest amount from them,” Sergeant Aaron Evenson said.

Soon they expect to begin selling t-shirts for individuals to purchase with the profits going to the canine program, according to Evenson.

The department has been running two dogs for about six years, according to Evenson. Currently those dogs are Greco, who works with Evenson, and Bongo, who works with Patrol Deputy Andrew Bromberg.

Evenson expects Greco to continue working for about a year to a year-and-a-half, at which point he will be retiring. Bromberg expects to take on a new dog once Bongo hits retirement. So the department will be training one new handler, though both will have to go through training with their dogs so they can learn how it’s done.

Part of why they are raising money for the dogs is because often canine programs don’t receive consistent funding, according to Evenson. Canine programs usually aren’t fully funded through the normal budgeting process, so they can be the first programs cut when money is tight, he said.

“In the past, I think, canines were always looked at as a luxury, perhaps, to governmental bodies that control funding,” Chief Deputy Kyle Burton said. “But the reality is they’ve gotten to the point where they’re such a valuable tool that they’re no longer a luxury — they’re a necessity.”

The department is expecting to spend roughly $50,000-$60,000 total for the project. That includes importing two “green” — or untrained — dogs, who they would train. Each dog was estimated to cost around $9,500 in 2020, though that price could go up, according to Burton.

The price of dogs has consistently increased for the past two decades, according to Burton. A lot of the demand also came from the U.S. Military, which began using dogs in Iraq and Afghanistan, he said. He wondered how the end of the war in Afghanistan could affect the demand for the dogs.

The department also needs to pay for two deputies to go through the 16-18 week training courses, which could cost about $12,000. Plus A canine squad car requires additional resources. The vehicles have air conditioning in the back, which most squad cars do not, according to Evenson. They also have to pay for the kennel and an alarm system that alerts handlers and automatically opens windows and turns on the fan if their car gets too hot.

“When I sat down and did the math, between that $55,000 and $60,000 would completely fund this program to continue running those two dogs,” Evenson said.

The department does budget for the general upkeep including food, veterinary care and replacement equipment like leashes and harnesses that break during searches.

But since canine programs tend to be first on the cutting block, deputies will try to minimize the extra costs the department pays for. Often deputies will avoid asking for new gear through, because their dog chewed through their sixth pair of work boots that year.

“So you’ll see deputies spend a lot of their own money on things like replacing equipment,” Evenson said.

The office is looking to get the funding for the new dogs well ahead of time, so they don’t have to scramble to replace them by the time they retire or an injury takes them out of service.

The Sheriff’s Office imports dogs from Slovak Working Dogs, owned by Marcel Dulansky in Slovakia. Dulansky is a highly-regarded dog trainer and even if he didn’t have the dogs they needed, he’d know someone who could get it to them, according to Burton.

The Sheriff’s Office imports dogs from there, because they breed some of the best working dogs, according to Burton. In the U.S. most dogs, like German Shepherds, are bred for their looks. In Eastern Europe, those dogs have been bred to work. Burton puts it down to how the former Soviet Block countries had to use dogs to secure their borders after the fall of the Soviet Union. Since then, they’ve gotten breeding down to a science, Burton said.

Dogs have become increasingly valuable as canine programs learn how to use them to track suspects or quickly search an area for evidence, drugs or explosives.

“They’re a force multiplier,” Burton said. “What I mean by that is a dog can do the work of many, many men or women in a very short period of time because of their sense of smell and their hearing.”

A dog can search an area that would take a dozen or more humans hours or days to search. Even then, the humans may not be able to actually find what their looking for because it is too well hidden, while the smell still can be picked up by a dog, according to Burton.

A dog also serves to protect officers, by being an early alert system that can tell when someone may be hiding around a corner or in some brush up ahead.

Once someone decides to become a dog handler the work will take over their life, because the dog is with them both at work and at home.

“Even at home stuff, you can’t let this dog jump on your couch, you can’t cuddle with this dog,” Bromberg said. “Feeding this dog is a mission, because that dog will literally destroy you’re whole entire house for a pebble of food.”

Evenson said that once you become a dog handler, it’s your responsibility to take care of that dog every day, even if you are too sick to work. Dog handlers also can get called out at all hours of the night if law enforcement needs a dog to track a suspect.

Even going on vacation can be a challenge. Though the dog handlers at the Mille Lacs County Sheriff’s Office work together to care for each other’s animals when one of them is away, according to Evenson.

“I spend more time with this dog than I do with my own family,” Bromberg said.

There’s the stress of expectations with being a dog handler. It’s common for them to go back home, if they weren’t able to find a suspect, and stare at the ceiling wondering what they could have done differently, according to Evenson.

“You put a lot of weight on your own shoulders trying to solve something for your partners and community members,” Evenson said.

It also means missing out on family events, when officers have to get called out to track a suspect. Their families also become married to the job, Bromberg said.

“I remember all the times we were in Walmart or Target and the phone rang and I had to just put everything away and leave,” Burton said.

But the deputies at the Mille Lacs County Sheriff’s Office have gotten their kids get involved, teaching them how to give commands to the dogs. Evenson recalled having his kids go hide and tracking them down with the dog, giving him time with his family while also training.

The work is hard on the handlers’ bodies too. Constantly working a leash and being pulled along by a dog is hard, plus they often have to run through swamps and rough terrain. Evenson said he was treated for hypothermia three times due to his work as a dog handler. Burton has fallen through ice while working as well.

That’s added up to ongoing complications in their wrists, back and knees. But they can’t stop, because the dogs need to stay sharp.

Plus they have to care for their dogs. Even when a dog is sick or injured, the handler may not know it because the animal can’t communicate when it feels off, and often will keep working through the pain.

Bromberg shared a story about how his dog once impaled itself on a broken fence post, but kept working. He had rolled the dog over to check it for injuries, but didn’t see anything until much later.

“My dog never showed me he was hurt, he never told me he was hurt,” Bromberg said. “I didn’t find out until two days later when I was brushing through his coat, and his coat had finally started to dry off that he had impaled himself. That just goes to show you how driven they are and how willing to work they are.

These dogs are so driven and so motivated to go to work every day you have to do something with them,” Bromberg said.

That means coming out everyday, even on their off days, to do training exercises that keep the dogs engaged.

The best way to donate to the canine fund is to contact the Sheriff’s Department, either in person at 640 Third Street Southeast, or by phone at 320-983-8250 and ask to donate money to the Mille Lacs County Canine Donation Fund.