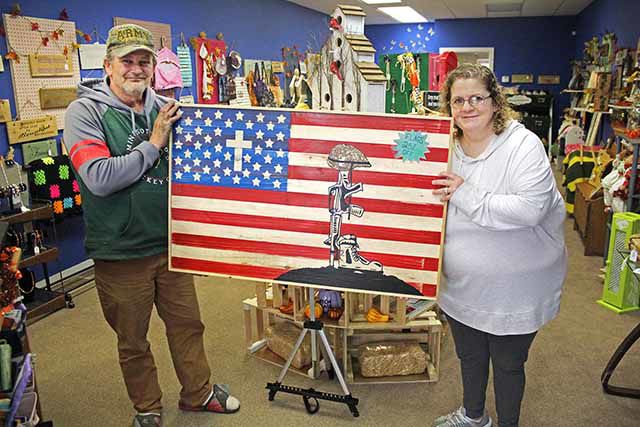 Wade and Cathy Birt, owners at Onamia’s Crafters Connection, hold up a wooden flag, an example of Wade’s handiwork available at the new craft consignment shop. 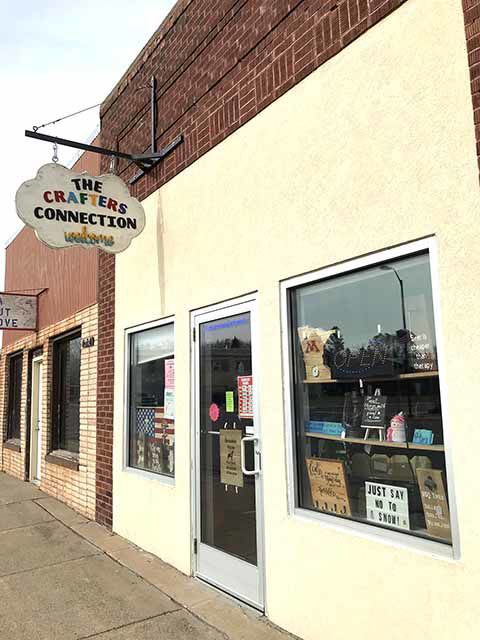 Wade and Cathy Birt, owners at Onamia’s Crafters Connection, hold up a wooden flag, an example of Wade’s handiwork available at the new craft consignment shop.

Woodworking, signs, crocheting, jewelry–all these are examples of items that, with a careful and practiced hand, can be made at home. Cathy and Wade Birt are two such practitioners committed to homemade creation. Having recently moved to Onamia, the two are now bringing their craftwork to Main Street at their new craft consignment store, Crafters Connection.

Crafters Connection opened its doors on Oct. 1 of this year, though Cathy explained that opening a craft consignment store has been a dream of the Birts for around 28 years. Prior to running the store, the couple has had a long history of selling their wares at flea markets and craft fairs and even have their own work available on consignment at other craft stores. The decision to open their shop in Onamia, Wade said, came about because they found a location with rent they could afford. “We thought about it,” he continued, “and said, ‘Let’s do it.’”

The Birts’ interest in crafting started with Wade. “I was inspired by my grandfather,” he said. Wade recalled taking annual summer visits to his grandfather’s sawmill in Hill City, where Wade learned “everything he knows about wood.” Wade’s interest eventually spread to Cathy. He would make shadow boxes and toy cars, and she began by staining and decorating them. Cathy then expanded her crafting, picking up crocheting and sewing as well. “Really, we’re inspired by each other,” Wade added. “It’s like we’re connected that way.”

They hadn’t known many local crafters, so they put out a call on Facebook to gauge interest. “On Facebook, we thought we might get one or two hits,” Wade said, “but, no, it exploded.” Currently, 11 other vendors beside the Birts offer their wares through the shop along with three or four others who have also expressed interest. Crafters had come to the store from a wide area, including Little Falls, Elk River, Pillager, and Crosby. However, Wade added that the majority of the shop’s inventory comes primarily from him and Cathy.

Crafters Connections offers a wide range of items, including jewelry, embroidery, sewn items, crochet work, metalworking, wreaths, hand-lettered signs, custom jewelry boxes and urns. Wade pointed to a number of his contributions, such as custom-made doggie beds, tailgating boxes and wooden, hand-painted flags. Crafters Connection was also able to take custom orders, whether it was Wade’s own woodworking or the work of another of the store’s vendors. Cathy added, “We’ll sell anything so long as it’s homemade.”

Wade noted that the pair’s craftwork keeps them continuously busy. “It’s a 24/7 sort of job,” he said.

Cathy added, “We are always trying to think of new things to make, what people might be interested in and what might sell.” Wade’s recent work has included refurbishing oil lamps as electrical models, and he has one example that originally dates back to pre-1940.

Cathy and Wade are new to the Onamia community, having just moved to the town in September. The pair had previously lived in Rice, Minn. Wade originally comes from Elk River, attending high school there until he quit to start a seven-year stint in the Army. Cathy is originally from State College, Pennsylvania, graduating from Boiling Springs High School. “I went out to Pennsylvania on a vacation to see other friends,” Wade said. “... that vacation ended up turning into 10 years.”

Outside their business, the Birts have a daughter and grandkids living in St. Cloud. Cathy noted that they are occasionally busy watching their grandkids. Wade noted he has two children and several grandkids from a previous marriage as well. Cathy previously worked for 10 years as a nursing assistant in Cambridge, taking courses through a local program. After his stint in the Army, Wade spent around 30 years working as a truck driver.

In the future, Wade said he and Cathy are hoping to expand the store and potentially move to a bigger location. “The way things are going,” Wade said, “we could be expanding faster than we thought.” He added that word of mouth has led to business picking up the past few weeks.

“We’ve had customers say, ‘I could buy these same items at a store cheaper, but I’d rather have it homemade because it means more,” Wade explained. “And that makes me feel good.” The Birts have a long established commitment to a crafting lifestyle, and with their doors now on Main Street Onamia, they’re sharing that work, from themselves and others, with the local community.

Crafters Connection is located at 518 Main Street, Onamia. For further information interested customers and vendors can call the store at (320) 532-5665 or reach Cathy’s cell at (320) 980-1298. A Facebook page for the store is not yet available, but Cathy informed the Messenger one will be available in the near future.