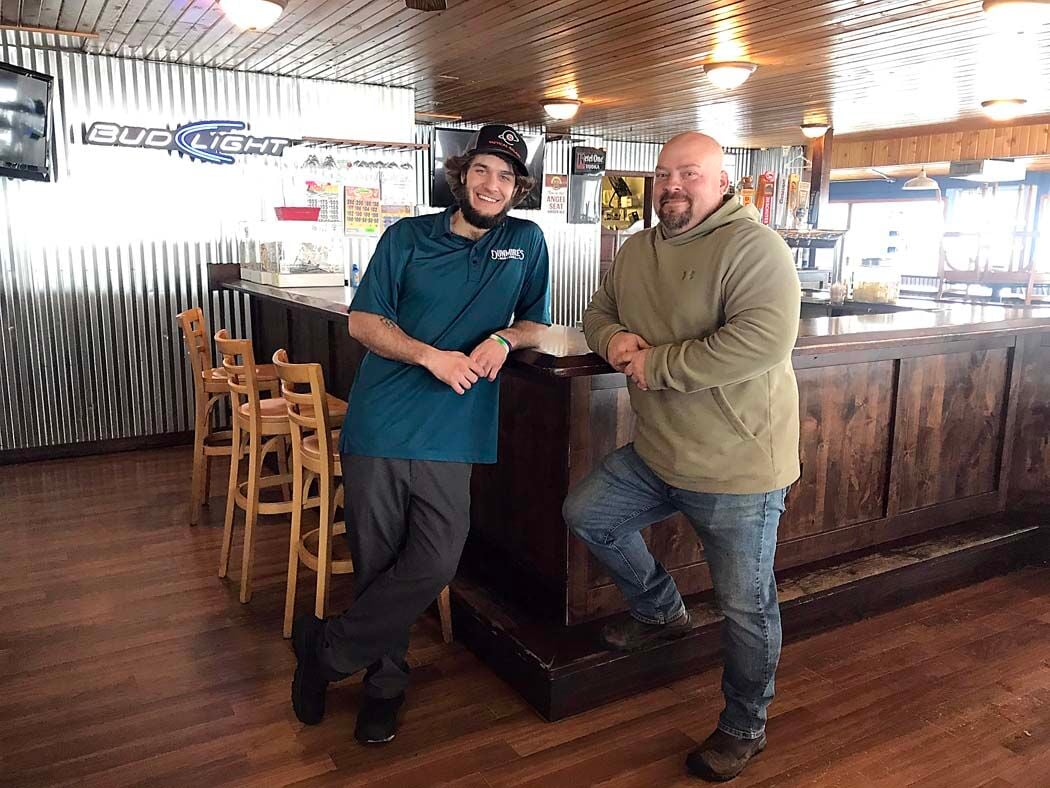 New owners Chris Dunmire and James Klink stand in front of the bar at The Y Club. The two have spearheaded a number of rennovations and hope to bring a new lakeside atmosphere to the decades-old business. 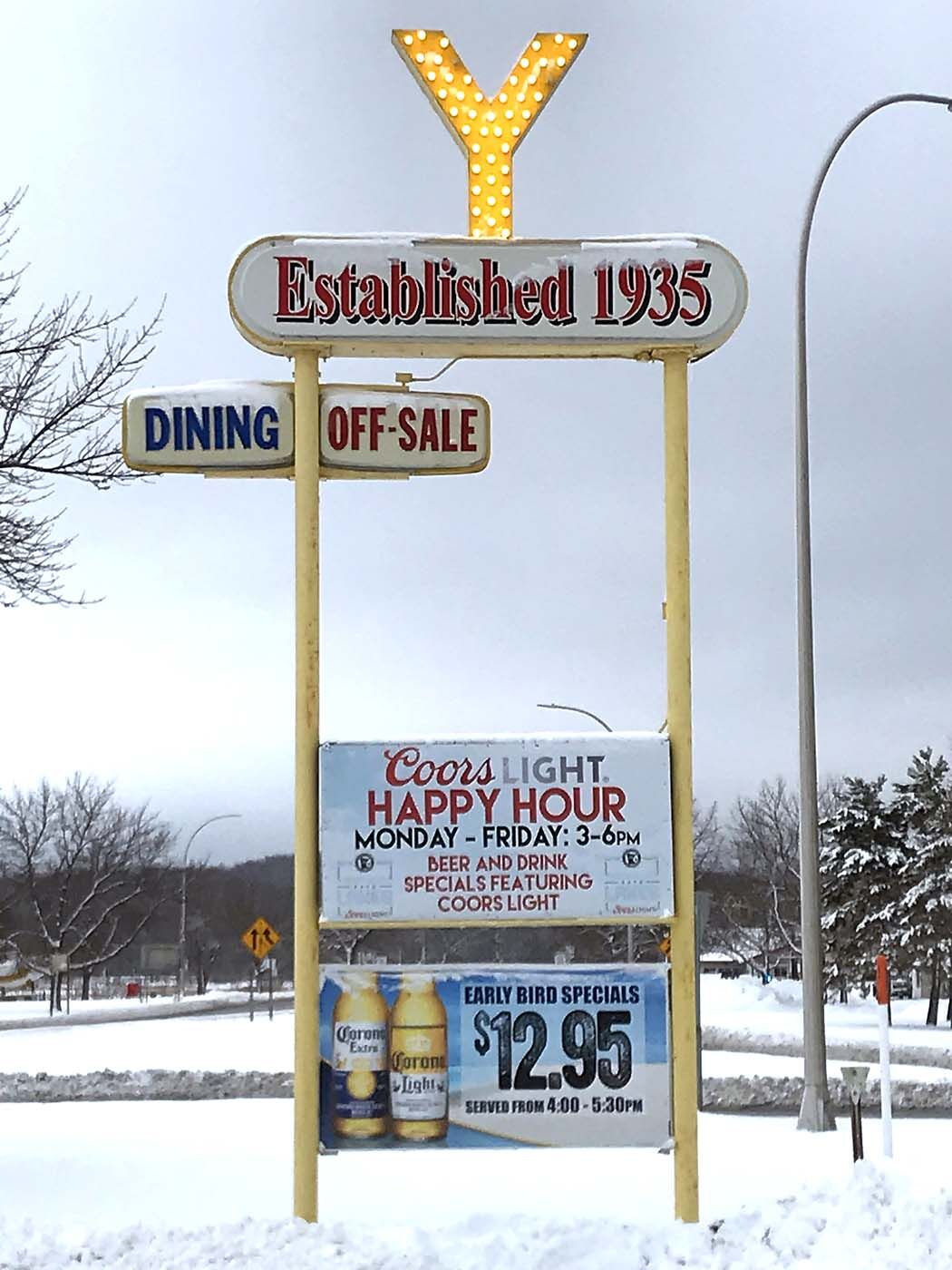 New owners Chris Dunmire and James Klink stand in front of the bar at The Y Club. The two have spearheaded a number of rennovations and hope to bring a new lakeside atmosphere to the decades-old business.

“Y - Established 1935.” This sign stands prominently next to the Garrison intersection of Hwys. 18 and 169, from which it takes its name. And the bar it advertises is as much of a fixture of the Garrison community as that intersection.

As of Jan. 1 of this year, new owners James Klink and Chris Dunmire have taken over the Y Club. The bar is open for business, and the pair have big plans for the restaurant, including renovations, a new menu, new events, and a new name. By this spring, the Y Club will complete its metamorphosis into the Rocky Bottom Bar.

Dunmire, who also owns Dunmire’s Bar and Grill in Brainerd, noted that he has a familial connection to the Y Club, as his father was the former owner. Previously, he had spent a stint of time helping run The Y Club under his father. Recently, however, health complications have led to his father to step away from the restaurant.

Dunmire had been friends with Klink, who owns Klink Construction in Brainerd, for years, and Klink had formerly helped Dunmire remodel his other restaurant. Both saw The Y Club as an opportunity.

“James and I took it upon ourselves to partner up to take [The Y Club] over and buy it from [my father],” Dunmire said, so he had one less headache to deal with.”

“We combined forces to make the best of what we’ve got,” Dunmire said. Klink has lent his expertise to renovations at the site, while Dunmire has focused on operating the business. Both men’s families have also been helping with the work of running the front and back.

Throughout 2020 and the pandemic, The Y Club has been opened and closed intermittently, and Dunmire estimated the business hadn’t been fully open since the summer. “It’s been a real difficult time, with everything,” Dunmire said, “and Garrison gets pretty quiet during the fall.” The first weekend of January, The Y Club reopened for takeout orders, and the lakeside bar has since reopened at 50 percent capacity for weekend hours. Klink and Dunmire hope to expand these hours as renovation work continues. Within the next month, the dining room would be remodeled and open as well.

By spring, remodeling work will turn to the outside of the building, including a new coat of paint , a patio, and other landscaping work. “It’s going to look a whole lot different,” Dunmire said, “and we are hoping it will bring the locals back in.” Around this time, Dunmire plans to rename the location as the Rocky Bottom Bar.

He explained that the new name was Klink’s idea. “He based it off Mille Lacs Lake,” Dunmire said, noting that the lake, particularly around Garrison Bay, had a rocky bed. With their work remodelling the building, Dunmire hoped the location could evoke a sense of being out on Mille Lacs, as the lake is what draws many to the area. “I sometimes feel like I’m out on the ocean when I get out there,” he added. Another plan under Dunmire’s consideration was working with the State to put in docks on the adjacent shore of the lake and crosswalk on the highway over to the restaurant, to allow boats to come to Garrison’s shore without running aground on the rocks.

Currently, the restaurant offers what Dunmire called their “COVID menu,” as they work back towards a full reopening. However, plans for menu expansion are in the works. “We’ll still have some of the old Y Club favorites that my father had, to keep his legacy here alive” Dunmire said, “but there’s also going to be a ton of new stuff.” He highlighted new foods, such as duck wontons, unique sandwiches and burgers as well as fancier dinner items for the evening crowd.

Dunmire also plans for The Y Club to host new events. To start things off, a kickball tournament on the ice will be held Saturday, Feb. 27, and other activities, such as a small ice fishing contest, softball, and ice bocce, will be held monthly if not every other week. Looking to summer, Dunmire foresaw bringing in bands and comedians, among other plans.

Elaborating on the goals of the new ownership, Dunmire said he wanted to create a place for people to come together as a community. “Right now, more than ever, that’s what we need,” he said, “strength for each other and being able to rely on each other as a community, to have a place to call home, to go home, and feel welcome.”

“The Y has always been a fun spot for me,” Dunmire said, “... It’s pretty neat to come back to a place you were once at and see if you can do it better than you did before.” There are a wide variety of plans in store for the bar at the Y-intersection of 18 and 160, as new but familiar hands take the wheel. Whether you knew it as The Y, or will come to know it as Rocky Bottom Bar, the location aims to remain a pillar of the Garrison community.