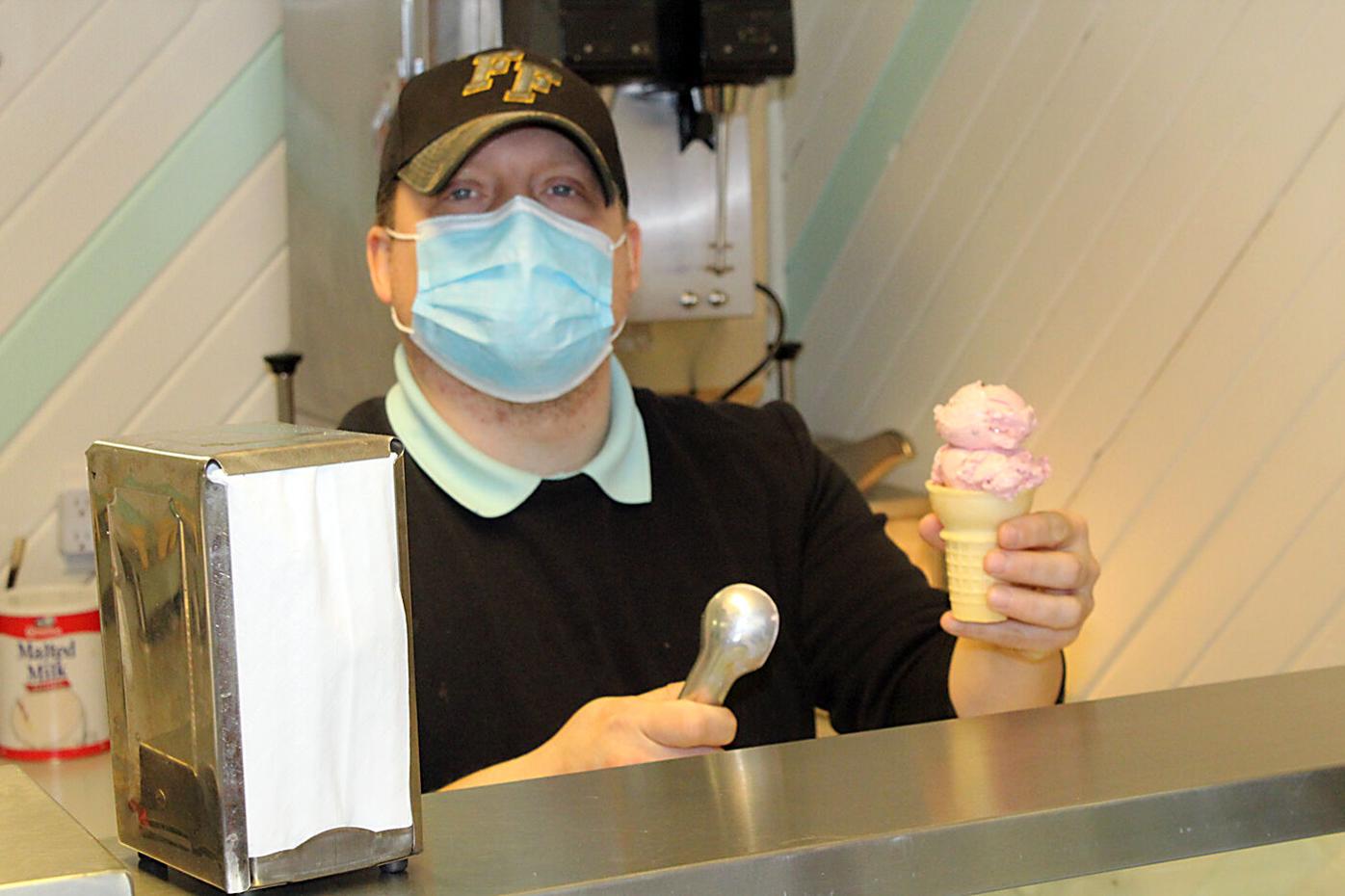 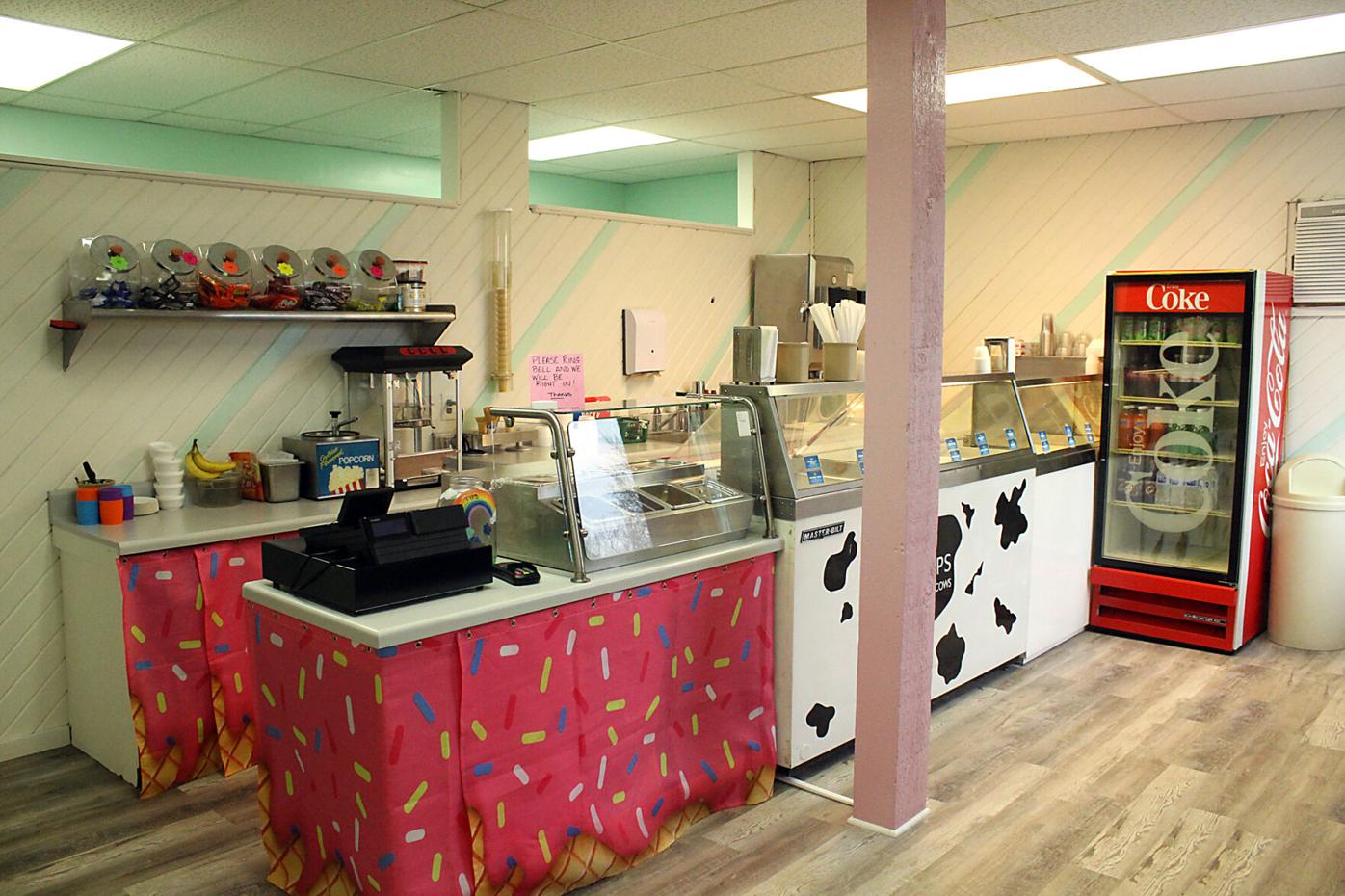 Previously used as a storage space, the Spotlite Cafe’s adjoining room has been renovated with new paint, trim and ceiling tiles as part of its transformation.

Previously used as a storage space, the Spotlite Cafe’s adjoining room has been renovated with new paint, trim and ceiling tiles as part of its transformation.

“My family likes ice cream shops,” said Nick Bratland, owner of the Spotlite Cafe in Garrison. “We go to them all the time with our kids.” Bratland has now brought that love to his own Garrison business, as additional space attached to the Spotlite restaurant has been renovated into an ice cream parlor. Garrison visitors looking for a cool dairy treat can now pay a visit to the Ice Cream Spot, neighboring the Spotlite Cafe on Garrison’s Madison Street.

At the time Bratland’s family purchased the Spotlite Cafe, back in the fall of 2020, the adjoining space next to the cafe had then been used as storage, with about 20 years of old equipment packed away. Bratland had known he would do something with the space, but had not been certain what. As COVID-related shutdowns forced the restaurant to move to takeout only and business slowed down, he decided to use the time available to put the space to use. Giving some thought on what the Garrison community needed, the family agreed on renovating the room into an ice cream parlor.

The space was cleared and, in Bratland’s words, underwent a complete renovation. The walls were painted, and new trim, floor and ceiling tile were all installed. Work on the Ice Cream Spot was finished around mid-February, Bratland said, amid the sub-zero cold spell that was hitting the lake, and the opening had coincided with Garrison’s annual Fishing for Ducks tournament.

All ice cream available at the Ice Cream Spot is Kemps brand, with Bratland indicating that he believes it to be the best brand available. In addition, the store makes shakes, malts, cones, and other specialty desserts.

Highlighting some of the shop’s original creations, Bratland noted their monster cookie shake, including M&M’s and chocolate chip cookie dough. To go along with St. Patrick’s Day, they’ve also been offering an Andes mint shamrock shake which Bratland said has been popular. The available ice cream flavors and signature shakes, sundaes and other dessert items will be kept on a rotation with new items introduced regularly. “We are trying to keep it fresh,” he said, “changing all the time.” Another new addition, which Bratland hoped the location would introduce the week of March 29, was homemade waffle cones, with the equipment for doing so in the process of being ordered and installed.

For kids in the area, a portion of the parlor has also been designated an arcade, including several old video cabinets, and the games available may be switched out from time-to-time. “There’s just not a lot in the area for younger kids to do,” Bratland added, “so we thought it’d be a good addition.”

Around Memorial Day weekend, Bratland is planning to hold a grand opening in celebration of his family taking over the restaurant. He advised locals to keep their eyes out for more specific plans as the summer draws near. In the interim, he also noted that the Spotlite Cafe is hiring staff for both the restaurant and ice cream parlor to help with implementing bigger plans in the work.

Bratland expressed gratitude for the support the community has shown so far, both in the restaurant and with the addition of the ice cream shop. “We look forward to seeing everyone,” he said, “and we expect a lot of fun this summer.”