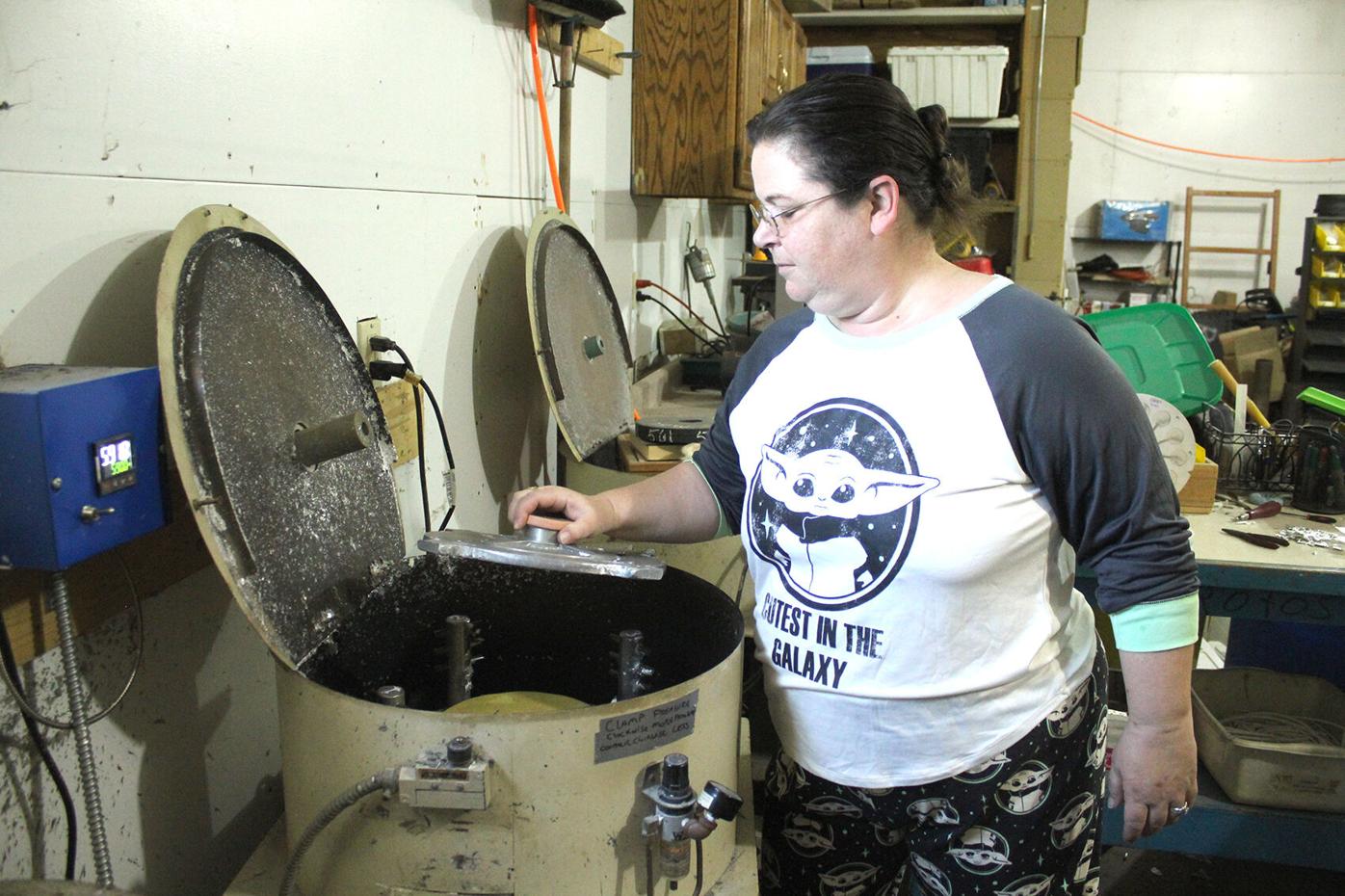 Christine “Pineapple” Jameson, above, preps the centrifuge to make a set of pewter charms in her on-site workshop in Wahkon. 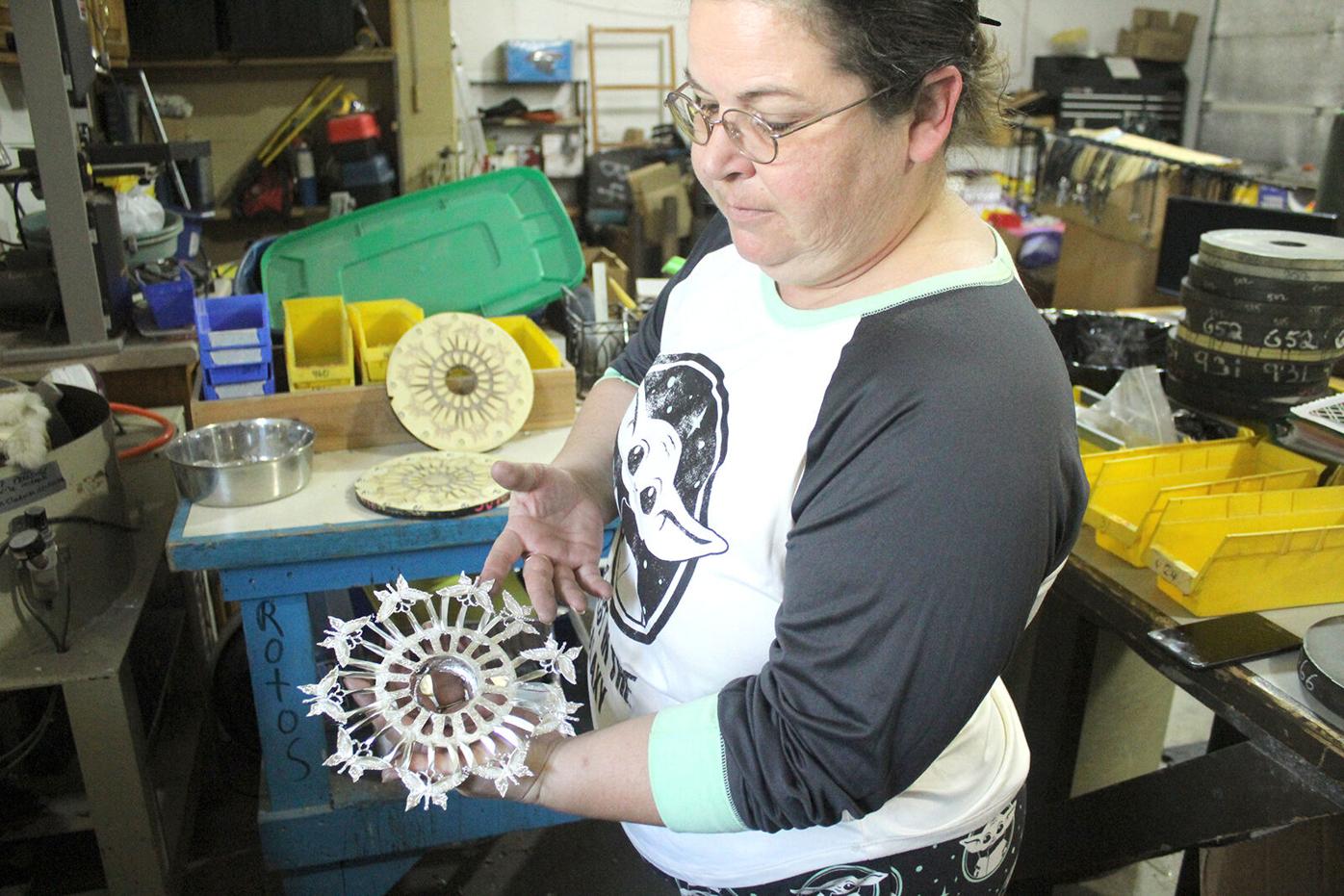 Jameson demonstrates what a ring of butterfly pendents looks like immediately out of the cast. 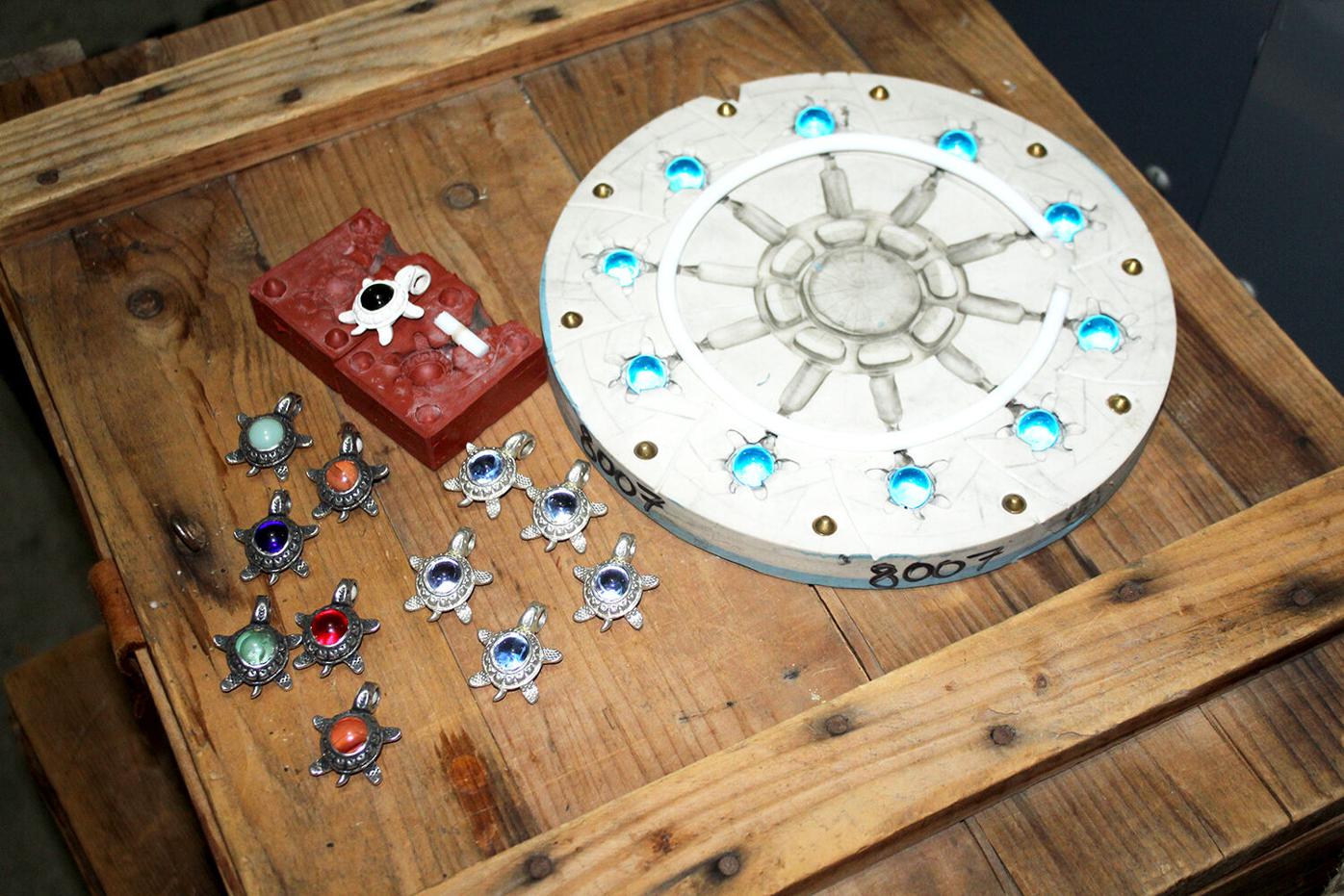 Each step of the charm process is included above, including clay prototype, master mold, centrifuge mold, unpolished and untreated charms, and the finish product. 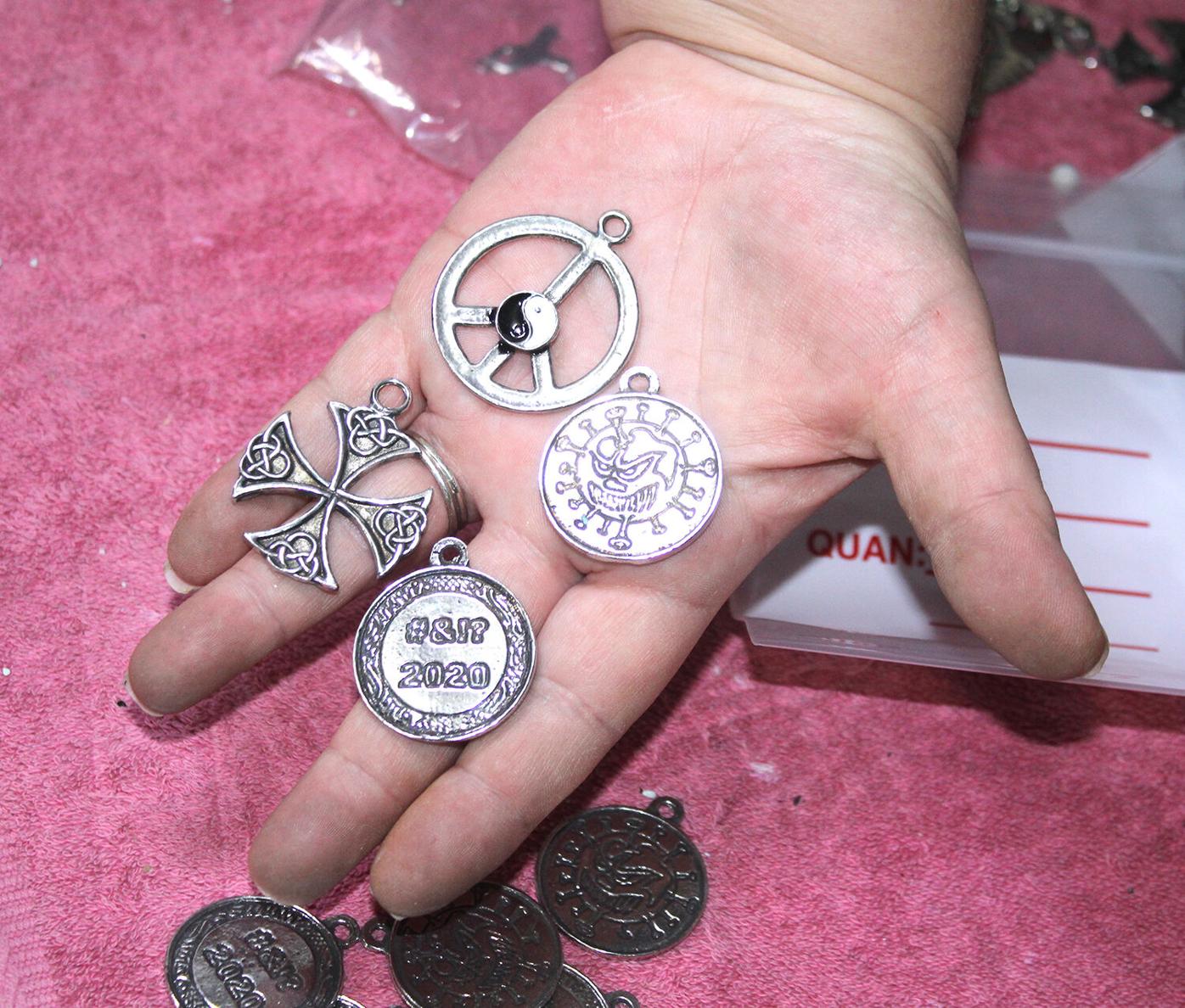 Christine “Pineapple” Jameson, above, preps the centrifuge to make a set of pewter charms in her on-site workshop in Wahkon.

Jameson demonstrates what a ring of butterfly pendents looks like immediately out of the cast.

Each step of the charm process is included above, including clay prototype, master mold, centrifuge mold, unpolished and untreated charms, and the finish product.

“I think we have this fantasy in our brain that there’s a big factory where all this stuff gets made,” Christine “Pineapple” Jameson, owner of Pineapple’s Place Trading outlet in Wahkon, said. “But really, it’s just my daughter and I out here.” While Jameson’s statement could be read broadly as a reflection on modern society’s relationship to goods production, the Wahkon business owner was also specifically speaking on her and her daughter’s pewter charm operation. Through this process of pewter metalworking, also known as whitesmithing, Jameson can produce thousands of charms out of her Wahkon garage, and it was this business that drew Jameson to her residence on Mille Lacs.

For years, Jameson has worked in the historical reenactment community, and she would buy pewter charms from Metal Rock, a Florida company, to sell alongside her reenactment work. Three years ago, while Jameson was making an annual trip to Florida to attend several reenactment shows, she learned that the couple behind Metal Rock planned to go out of business and retire.

Following a suggestion from her fiance, Jameson reached out and bought all of Metal Rock’s equipment and pewter molds. In total, she acquired around 2,000 molds, featuring between 3,000 and 4,000 designs, and is still in the process of making sure these designs are properly categorized.

Searching for a location for her new pewter business, Jameson happened to make her way through Wahkon. “I drove north through Isle, hooked a left, headed for Hwy. 169, but I didn’t make it further than here,” she explained. At the time, her daughter and niece were looking for a home to move to. She came across a Wahkon property zoned both as commercial retail and single family, which provided both a home for her daughter and niece and a business for them to run. She purchased what would become Pineapple’s Place Trading in July of 2018.

Eventually, circumstances led to Jameson’s niece stepping away from the business. As Jameson couldn’t afford to pay for two homes, she sold her place in St. Francis and moved to Wahkon with her daughter.

Approaching her then-home bank in St. Francis, Jameson had been unable to secure the loan to start the business. “Basically, they told me I was too poor to succeed,” she said. However, she credited the First National Bank of Milaca for the support they had been willing to give instead. She also noted that she’d received much support from 21st Century-Atwood realtor and Wahkon mayor Ronda Bjornson, who sold Jameson the property. While the changes brought on by COVID-19 left Jameson uncertain of her yearly output thus far, she estimated she and her daughter had put out thousands of charms.

In addition to the product available through the Pineapple’s Place storefront, Jameson also sells her pewter products as a wholesale distributor. “The bulk of our business is as a wholesale manufacturer, business-to-business,” she said. “… but that’s a misconception. Just because you say ‘business-to-business’ doesn’t mean you’re 3M.” Many of the businesses Jameson works with are hobbyists and crafters running their own small businesses. “I made the charm – not China – and they make everything else,” she said. “I’m just one piece of the puzzle in a finished product.”

Jameson explained that she uses britannia pewter, an alloy made primarily of tin with a small amount of antimony and less than 2% copper, and it is nickel-, lead-, and cadmium-free.

To cast pewter charms, Jameson places her molds under pressure in a centrifuge, and adds in liquid pewter as the centrifuge spins. Whether it’s spare metal that spins out during the casting process, defective charms, or excess metal from the cast, Jameson returns these pieces back to her smelter, creating as little waste as possible.

From her reenactment career, Jameson has experience pouring beeswax for candles, and she noted that the skill was in some ways transferable to the metalwork, particularly when it came to keeping a steady hand while pouring metal. She noted that, while liquid beeswax started around 150 degrees Fahrenheit, liquid pewter was around 600. “I have zero desire to stick my hand in that pewter pot,” she said. “I’ve been splashed with beeswax. That was enough.” Her beeswax working background had one further applicability as well: Adding beeswax was a natural means of removing impurities out of the pewter.

After casting, finished charms are sanded to remove sharp edges or burrs, and then placed in a polishing tumbler. Million Dreams Pewter used a vibratory tumbler filled with ceramic porcelain beads to polish their charms. To add contrast and color, the polished charms are treated with acid.

When the process of casting a design is finished, Jameson will often be left with more charms than she needs to fill an order. As such, Million Dreams Pewter has steadily built up a backstock of a number of their designs. These spare charms may either go towards future orders or get recycled in the smelter for new designs.

Jameson highlighted a handful of other processes the charms may go through. Some charms are also hand-enameled by her daughter to give them color, while other designs have gems epoxied on. A new process Million Dreams has been experimenting with is casting charms around marbles, which Jamison demonstrated with a recently developed turtle-shaped design.

A number of original designs like the turtle have been produced by Million Dreams Pewter. First, the Jamesons build a clay figure of what the design will look like, and this clay sample is used to make a master mold from Legos and silicone. Pewter charms will then be made in this master mold to cast the production mold used to make multiple charms simultaneously. While Million Dreams Pewter does own a vulcanizer to make the production mold disks used in their centrifuge, it is currently broken, and Jameson has not yet accrued funds to repair it.

The original design and master mold are both archived, so that the production mold can be reproduced when it wears out. Jameson expects any production mold to last between five and 15 years, depending on the frequency of use.

Part of the community

Eventually, Jameson hopes to expand Million Dreams Pewter through further staffing. However, at present, she did not feel the company would be able to pay those workers the full value of their labor. Currently, she and her daughter are, in Jamison’s words, “working for [their] room and board.” Looking to the future expansion, however, Jameson said she would also consider making Million Dreams Pewter employee-owned, once she was in a place to bring more people on.

Jameson noted that she’s donated pewter items for the Wahkon Days celebration. “We really enjoy being part of the community here. It’s a new community for us, and we are making a home … We look forward to being here for many years.”

Due to COVID-19 restrictions, Pineapple’s Place Trading in Wahkon is open by appointment and can be reached via phone (see below). Jameson also sells some of her finished designs through her Etsy page, www.etsy.com/shop/Pineapplespewter. Where wholesale is concerned, a catalog of designs can be found at www.milliondreamspewter.com. Orders for whole charms, which require a $50 minimum purchase, can be made via phone, at (320) 317-5009, or via email, at MillionDreamsPewter@gmail.com.