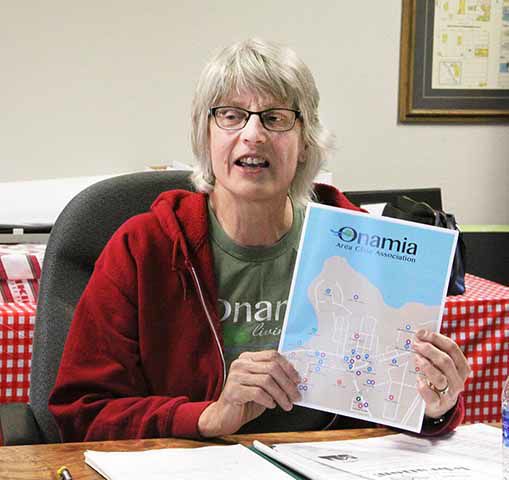 Onamia mayor Marge Agnew showed off to the city council the new city brochure produced by the area civic association. 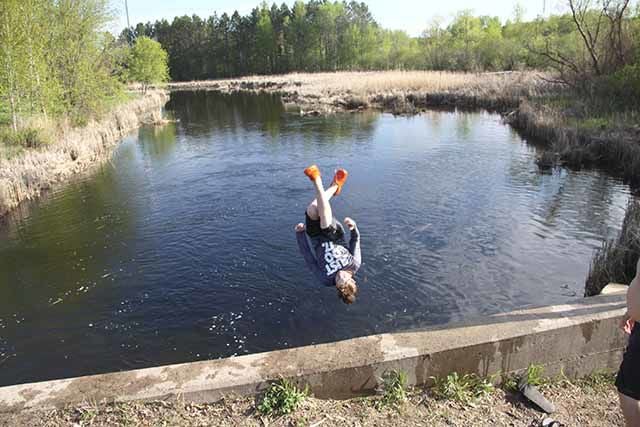 Typically, Onamia City Council meetings feature reports from various citywide departments, and that is what transpired at the monthly meeting on June 12.

Zoning led off the agenda with some discussion about a request from a billboard company to add boards to property east of Hwy. 169 in proximity to signage already in place on the west side along the City of Onamia proper. The council took a wait-and-see stance on the issue of whether or not to grant the billboards, stating that the person making the request must first appear before the Onamia Planning Commission. Several council members mentioned they would like to visually check out the proposed site for the boards before making a decision one way or the other.

Also under zoning, there were questions posed by council members as to who owns the rights to updating and creating certain websites regarding the city of Onamia. Onamia Mayor Marge Agnew reported that she tried to contact the person who is causing some problems with one of the Onamia websites but was met with no response. The council is considering taking action to acquire ownership of this site.

Next on the agenda was a report from Onamia police chief Bob Matzke, who stated his concern about the increase in what he termed “dangerous” activity by youth near the dam at the edge of town just west of Onamia.

Matzke said kids were using that area to swim in the rapids of the river and gathering along the roadside causing traffic going to and from the city to be hindered from their activity. “I am concerned that this situation is an accident ready to happen,” Matzke said. Someone in the audience added that he had witnessed kids jumping off the bridge into the river, some even doing backflips off the bridge. With this in mind, the council voted to appeal to the Minnesota Department of Transportation to consider erecting signage prohibiting fishing, swimming or diving from the roadside into the river.

The city clerk then asked the police chief and other city officials to consider what to do about enforcing an existing city ordinance that would issue tickets to those land-owners in town who are delinquent in mowing their lawns. The police chief agreed to take action with those who are not complying with the mowing ordinance, if given a list of those not mowing their lawns.

Gene Falconer, chief of maintenance for the city, reported on improvements with the new town baseball park, saying that the base pads along with benches in the dugouts were installed, adding that the benches were made by students at Onamia High. The ball field was scheduled to host several local little league games in June and July.

Falconer also commented on the increase in vandalistic graffiti appearing in places around town such as the library walls, picnic tables and several bridges in the area. “We are having trouble keeping up with their (vandal’s) work,” Falconer said. “We wipe out the graffiti, and sometimes in broad daylight the vandals are back at it.”

Discussion then led to the situation with the bogs blocking the dam site west of town and the bogs that had worked their way to the base of the Soo Line railroad trestle several blocks down stream, blocking water flow and causing a rise in Lake Onamia. Falconer reported that he has been working with Band DNR, Minnesota DNR, as well as Minnesota DOT personnel, planning on what they can do to extricate the bogs from those potentially harmful areas. Falconer claimed the high water had the potential of causing problems with the city sewers and with the operation of the city water-treatment plant. He also said, if they get rid of the bogs at the dam and at the trestle, the city may not be out of the woods with this issue. “The DNR took a trip around Lake Onamia and found huge bogs that have the potential of breaking loose in the future,” Falconer said. Councilman Bill Hill recommended the city “address the problem now.”

Falconer also mentioned the few areas of street damaged over the winter by breaks in water conduits will be resurfaced within the next few weeks.

Kudos were given to maintenance person Josh True for his work in monitoring the cities water quality over the past months. He was also credited for some commendable mowing projects in the ditch near Hwy. 169 leading into the city.

Before adjourning, mayor Agnew addressed two issues. She wanted to assess the possibility of doing some landscaping work at the intersection of Hwy. 169 and Rosevelt Road leading into Onamia near the impending new Casey’s Convenience Store. She also showcased a new publication published by the Onamia Area Civic Association which depicts a map of downtown Onamia and features area businesses and prominent places of interest. The publication will be available for perusal throughout the city for the general public and visitors at no cost.