Isle City Council considers a name change for the Lakeview City Park at its regular city council meeting in November. 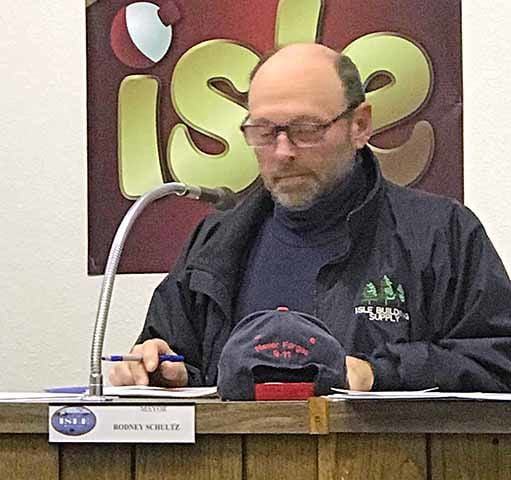 Isle City Council considers a name change for the Lakeview City Park at its regular city council meeting in November.

At the regular Isle City Council meeting in November, the council was presented with the question of if they would allow the renaming of Lakeview City Park for what the anonymous person called a “generous donation.”

Isle City Clerk Jamie Hubbell said the donor was interested in the possibility of tearing down the bandshell and putting up a new picnic shelter. The donor wished to remain anonymous, she said, and added the donor wanted to know if it was a possibility and what the minimum donation would be.

The council stated the donation would have to be over $25,000 in order for them to consider renaming the park.

Isle City Police Chief Mark Reichel reported on the 200 calls the department responded to for the month. The following is a highlight of the calls.

The police responded to a domestic assault to an address on Bud Street where a boyfriend and girlfriend got into a physical altercation. The male suspect was arrested and brought to jail.

The police department transported 12 boxes of pharmaceutical drugs to the Pope/Douglas County Waste Management in Alexandria where the officers have the boxes weighed and observe the drugs being dumped and incinerated.

The police responded to smoke in the Isle Muni. They found the smoke came from the furnace when the heat was turned on, but there were no issues. The police department responded to an address on Hwy. 47 for an electrical fire started by an inside wood stove. Family members were OK with no injuries.

The police responded to First Ave. S. to remove an unwanted person in which the person was found to have a warrant for their arrest. The person was arrested, and during a search of the person, the officer found meth and cocaine on the person. The individual was also arrested on drug charges. The department also responded to an address on Chiminising Drive on reports of an individual going through vehicles. Nothing was reported missing from the cars, but after running the individual’s name, they found multiple warrants, and the individual was arrested and brought to jail.

Shoplifting calls also came in from a local grocery business. The suspected vehicle left the business and was located by officers on the east side reservation on Naawaakwaa Street. The vehicle was occupied by three people, two of which admitted to shoplifting. The third person was not involved. Two were charged for shoplifting and were trespassed from the business’ property. One of them went to jail on a warrant. Another call came in for shoplifting at the same business where the vehicle was traced to a Mora address. The officer went to the Mora address, and the person admitted to shoplifting and was charged for theft, along with being trespassed from the business’ property.

The maintenance department added a new storm sewer catch basin in the alley behind Faith Lutheran Church to catch water run off and stop the alley from washing away. The maintenance department also ran a camera through the 1st St. N. sewer main to detect a cause for sinkholes. It was reported that the main line looks fine, but the problem may be with two separate lines.

Two duplexes were approved on Maple Wood Court by the planning and zoning department.

The Isle Municipal Liquor Store reported a month- end loss of $13,085.24 for October. However, year-to-date, the store has made $807,932.99 which is up from last year at the same time in which the store made $721,816.22. Liquor store manager Monica Weets noted that October off-sale purchases were up for beer, wine and liquor.

The Isle Municipal Liquor Store reported a month end loss of $13,085.24 for October. However, year-to-date, the store has made $807,932.99 which is up from last year at the same time in which the store made $721,816.22. Liquor store manager Monica Weets noted that October off-sale purchases were up for beer, wine and liquor.