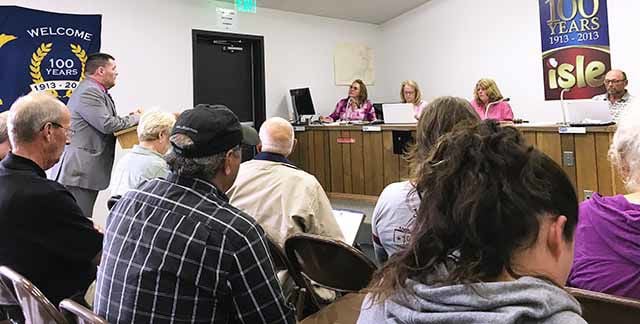 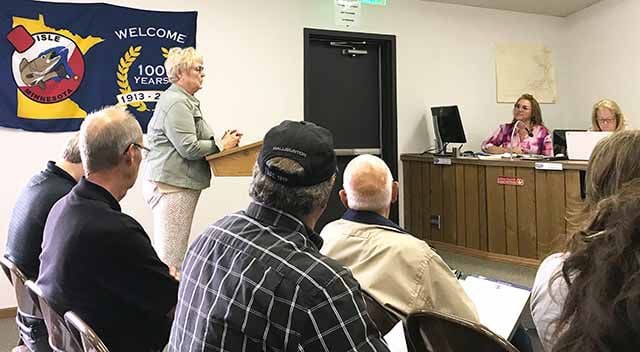 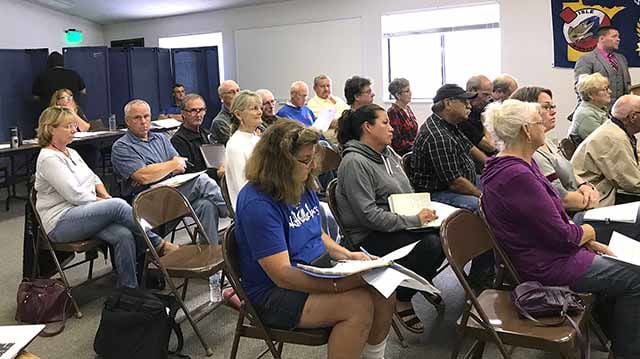 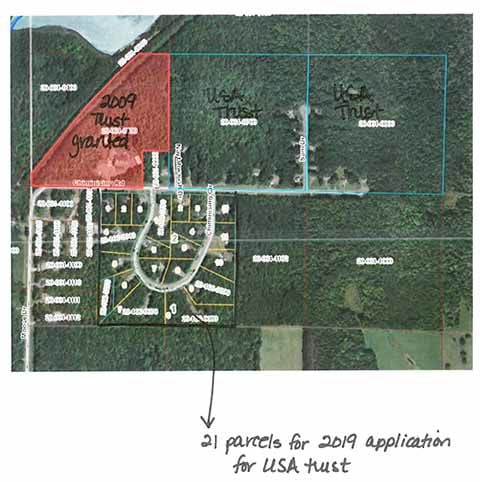 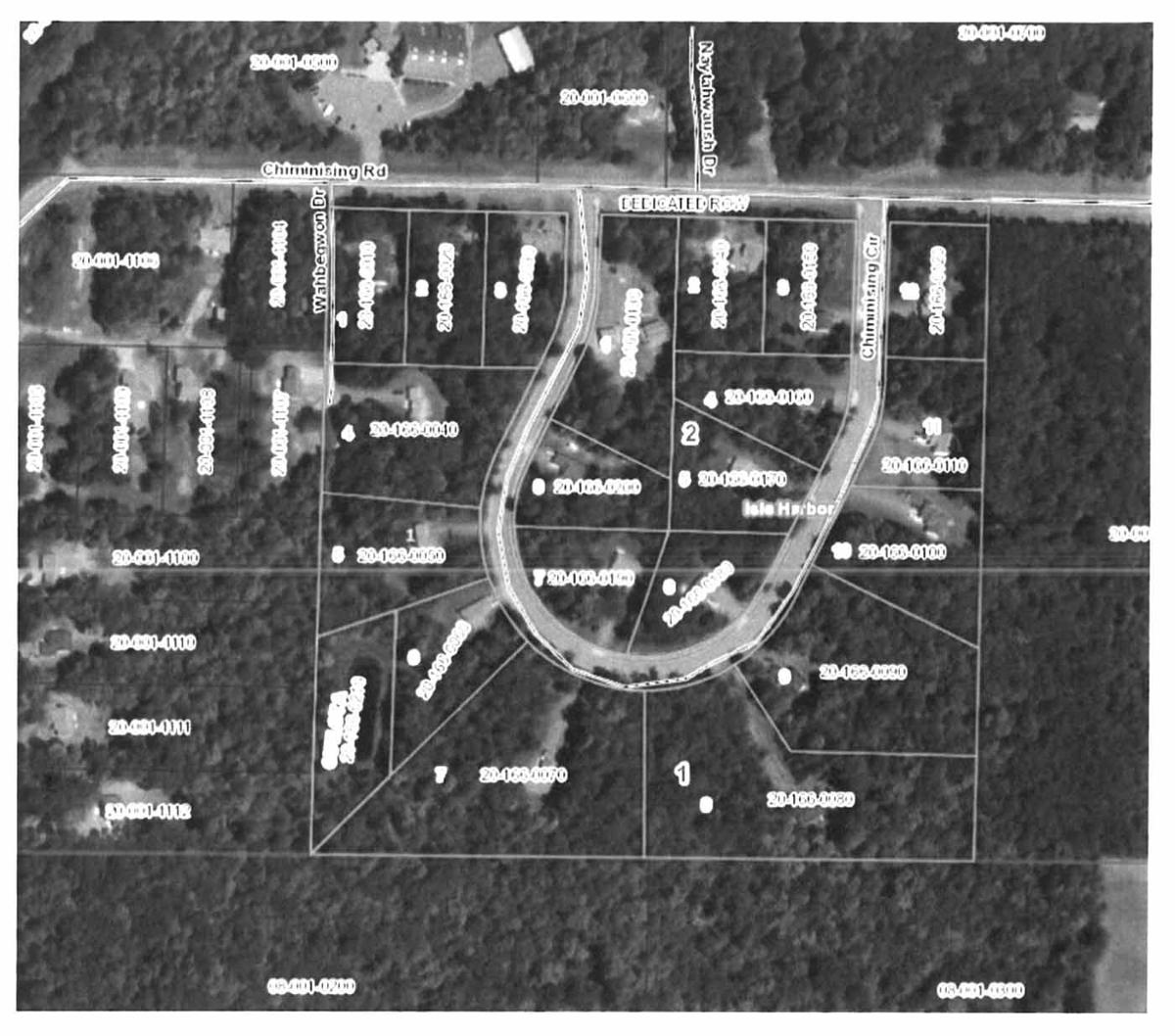 The Bureau of Indian Affairs in Washington D.C. gave notice to the City of Isle that the Mille Lacs Band of Ojibwe applied to place 21 parcels, also known as the Holmberg property located on the east side of Isle, into trust land and off the tax rolls. A letter submitted by the United States Department of the Interior, Bureau of Indian Affairs (BIA), dated July 25, 2019, was submitted to the City of Isle and included in the council packet at the Aug. 13 city council meeting. The 21 parcels equal approximately 40 acres of land and approximately $16,584.92 off the city’s tax rolls (per the current tax capacity value) should the application be approved with a total of $40,170 in taxes between the county, city, school, Region 7E, and special taxing district (sewer and solid waste). This parcel is approximately 3 percent of the city’s total levy, but this trust land application may be foreshadowing the broader action of turning the original 64,000 acres of reservation property, in which Isle is located, into trust land, an issue that is currently being litigated in federal court.

The city’s attorney, Damien Toven, said, “This is something that is going to take a good deal of time. The application has been submitted, and notice has been given. Now the city should submit a response, responding to the various aspects to potential trust, economically speaking and other issues like sewer and water. An initial decision will be made by a local supervisor, and local agencies can appeal the decision.”

He addressed the crowded room saying they wouldn’t be taking public comment at that time, adding, “nothing that you do tonight is going to end this; it’s just the first step the city has to take one way or another. It’s emotionally charged, and there’s a lot of controversy. To invite debate and argument at this early stage may be counterproductive.” Rumblings in the crowd could be heard after his statement.

“You are the elected officials, and if the city is opposed to the action, a simple motion and passage is sufficient. Then from there, we can talk about what the city wants to do. This is all very preliminary,” said Toven.

The Isle City Council took a vote to accept or reject the proposal and unanimously voted to oppose the application as presented and to submit an impact statement to the BIA.

The final determination on whether to acquire this property in trust, however, will be made by the Secretary of the Interior or his authorized representative, the U.S. Department of Interior, the letter states. The letter goes on to say that they invite comments from the city on the proposed acquisition to assist them in the decision.

The proposed trust property consists of 19 units of housing with no further development planned with the exception of one vacant lot where a house can be built, according to the letter.

The City of Isle has 30 days to submit written comments to the Bureau of Indian Affairs office. Jamie Hubbell, Isle city clerk-treasurer, said an official letter will be prepared.

A preliminary letter stated facts and reasons for the council not supporting the fee to trust application. The $16,584.92 loss in city tax revenue being the first reason. This would add to the tax property the city already struggles to offset from the previous properties purchased and devalued within its corporate limits, putting the tax burden on the rest of the tax-based properties, the letter says.

Currently, fire protection services come from Isle Fire Department. Street maintenance and assisted emergency services response comes from the public works department. The city just approved a $6.2 million water and sewer extension to include the parcel. The letter states that the conversion of the parcels to trust would create a problem of utility ordinance enforcement issues as local jurisdiction would no longer be followed on the parcel. The city states: “If infrastructure connect was still considered, it would not be able to be federally funded within our project for non-city parcels. Payment regulations would not be able to be applied to these utility users equally as tax-based properties.”

They go on to state that the current planned unit development is regulated by the city zoning ordinance and is consistent with the R1 standards and that zoning standards would no longer be enforceable by the city and could become inconsistent with the surrounding community. “Historically, some increase in blight concerns arise from such approvals,” the letter states, “leaving the city and their neighbors with no recourse.”

Another concern of the city is, according to the letter, that past purchases of commercial buildings by the Band have been left vacant where the city was once collecting higher taxes and utility fees, and increased property values are still causing financial hardships for the taxpayers.

Water and sewer use is down, and people are going to other cities that provide the services that are no longer provided here, with the domino effect of less commercial “traffic” throughout the city and downtown businesses (i.e., … Hwy. 47 Motel, restaurant, bait shop, medical facility, and corporate venture offices), the letter states. They add that less jobs are available locally without these businesses’ growth.

They conclude, “Removing these parcels from the tax rolls will continue the stresses and hardships already placed on this community, unless the Mille Lacs Band of Ojibwe plans to offset these losses for the city in another way other than through taxes. No guarantees make it difficult to budget for.”

“When the Department of Interior–Bureau of Indian Affairs–proceeds positively with these applications, state sovereignty is affected. States have the right and duty to provide specific services for their citizens, but the following would be negatively affected by this action: property values, property taxation, assessments for water and sewer and other infrastructure to ensure a safe and healthy environment, access to adequate road systems outside trust area to schools and community, plus zoning laws and ordinances.

At the state level, legislators have wrestled with demands from those of us who represent areas of tribal land that have been removed from fee into trust. My colleagues constantly remind me that the loss of property and its value is a federal responsibility, not a state responsibility. I have tried for several years to convince my colleagues to reimburse counties, school districts and cities for loss of property tax.

In addition to property losses in the Lake Mille Lacs area, the county and state have suffered economic losses that have resulted from decisions made by co-managers (state and tribal) in regard to the walleye. The closure of the lake to fishing for walleye in 2015 devastated this area because small businesses around the lake lost millions of dollars of revenue.

In closing, when loss of state sovereignty occurs, citizens, business, schools, and local governments lose the rights that are guaranteed by the Constitution, both of the United States and the State of Minnesota.

Please consider the negative effect that this application, if accepted, will have on the state.”

Band’s reasoning for the fee to trust transfer

The Mille Lacs Band of Ojibwe’s Executive Branch of Tribal Government submitted documents included in the city council’s packet outlining the proposal. In this packet, it states, “The Band’s application to have the Holmberg Parcel taken in trust should be considered under §151.10 because the property is located within [and] contiguous to an Indian reservation. Conversely, since the property is not located outside of and noncontiguous to the tribe’s reservation, there is no need to consider the additional factors under §151.11. These conclusions follow from the definitions of “Indian reservation” in §151.2(f).”

The document goes on to say that the Holmberg Parcel is within the boundaries of the Mille Lacs Indian Reservation as established in the Treaty of 1855. The term “reservation” is defined in the document as, “that area of land over which the tribe is recognized by the United States as having governmental jurisdiction except where there has been a final judicial determination that a reservation has been disestablished or diminished. Indian reservation means that area of land constituting the former reservation of the tribe as defined by the Secretary.”

The document further stated that Congress’s purpose in establishing lands in trust was “to rehabilitate the Indian’s economic life and to give him a chance to develop the initiative destroyed by a century of oppression and paternalism.” Specifically, the acquisition of the Holmberg Parcel will assist the Band in restoring the trust land base lost during the allotment era and facilitate the Band’s achievement of self-support and self-determination, the document states.

The need for additional land was also stated as cause for the fee to trust application stating the Band needs additional land to provide adequate housing and governmental services for its Band members and that the current need exceeds the supply. The Band currently has 4,716 members with .77 acres per Band member with nearly all the remaining undeveloped trust land composed of wetlands or under archaeological considerations, says the document.

Other factors included by the Band were the loss and restoration of the Band’s historical land base, self-sufficiency and self-determination, subsidized housing for Band members, and permanent protection from outside government interference.

The Band states that the following information should be factored in when considering the impact from the loss of tax revenue:

Taxes paid by the Band (the Band pays approximately 2.3 percent of the total property taxes in Mille Lacs County).

Taxes and other economic benefits generated by the Band, specifically the casino

Governmental services provided by the Band at no cost to the state, county or other taxing districts (mutual support agreements for law enforcement and other services). The document states that the Band provides other services to the Holmberg parcel such as road maintenance.

In closing, the document states that transferring the Holmberg Parcel into trust “will not have any impact on the ability of the city or county to provide government services,” and any “tax-related impact that will result from the transfer is heavily outweighed by the benefits to the Band from placing the land in trust … the Mille Lacs Band is paying for far more than its fair share of the cost of governmental services and, overall, its activities have resulted in significant financial benefits to the state, the county, the township, the school district, and other taxing districts.”

They add that “there is no reason to believe that acquiring the Holmberg Parcel in trust will create any jurisdictional problems … if anything, acquiring the land in trust will help resolve jurisdictional problems by making it clear that the land is subject to federal and Tribal jurisdiction.” They also add that “governments evolve in a dynamic climate … the changes witnessed in Mille Lacs County in the past two decades have been dramatic and, for the most part, extremely positive for the county, its citizens and its taxpayers … most of this is attributable to the economic development efforts of the Band.”