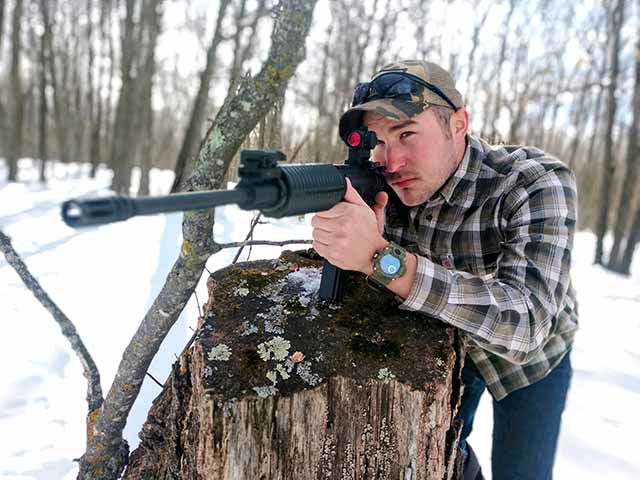 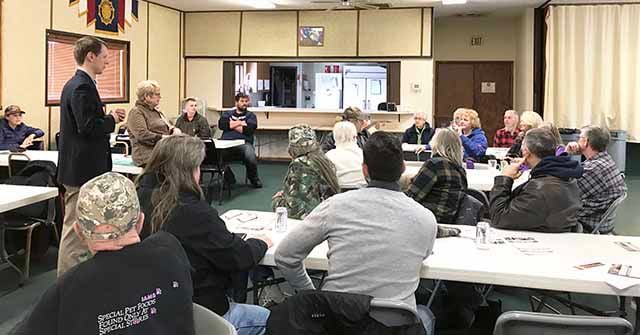 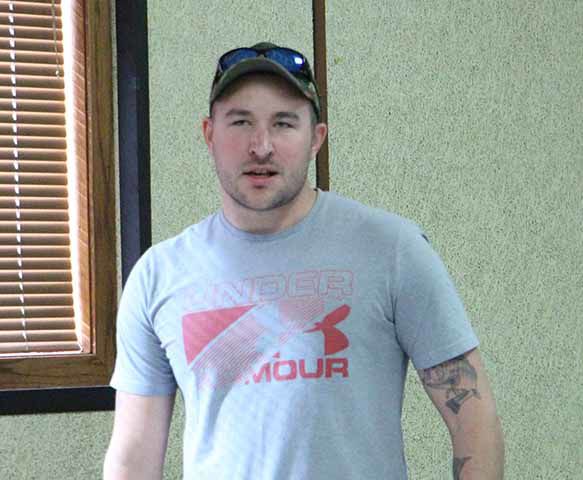 Josh Bretzman, a Garrison resident, who spoke of his efforts to organize a Second Amendment Sanctuary in Mille Lacs County.

Josh Bretzman, a Garrison resident, who spoke of his efforts to organize a Second Amendment Sanctuary in Mille Lacs County.

For most of us, sitting around talking politics doesn’t amount to much more than heated discussion or attendance to a local caucus. But for a group of young men in Mille Lacs County, talk of politics, specifically of gun control, has led to a grassroots effort to declare Mille Lacs County a Second Amendment Sanctuary county.

A group called “Mille Lacs County for 2A Sanctuary” has begun an initiative, similar to one which

recently passed in Roseau County, to prohibit the enforcement of any new gun laws that will infringe upon Constitutional rights.

“A few weeks ago a few friends and I were discussing politics,” said Josh Bretzman, of Garrison, a key organizer of the group along with his brother Dustin and two others. “The conclusion was we need to stop discussing politics and start acting.”

A “well regulated Militia” against government tyranny and generational heritage

The group asserts the Second Amendment language, stating: “A well regulated Militia, being necessary to the security of a free State, the right of the people to keep and bear Arms, shall not be infringed” means that individuals are given the right under the Constitution to bear arms as a means of defense against a tyrannical government. The idea stems from cities such as San Francisco declaring themselves “sanctuary cities” for illegal immigrants.

Another key player in the local movement, Adam Thorsbakken, says, “Firearms are our last line of defense against criminals or a tyrannical government.”

“If you think we cannot defend ourselves with just ARs (Armalite Rifle Company) and AKs (Avtomat Kalashnikova) against the government and we should get rid of them, I would like to remind everyone we have been fighting a war against terrorists using AKs since I was in high school,” said Bretzman, referring to an argument that has been made against the possession of ARs and AKs.

For Shawn Dobey, who has also been instrumental in the effort, upholding the Second Amendment has generational importance. “Generations of family heirlooms get passed down through the years. This is important to us,” says Dobey, “that our country honors, not only our Second Amendment rights, but our family history and traditions so we can pass them down for generations to come and teach firearm safety, respect and responsibility.”

As the legislative session heats up, so does this effort as the group is hoping to gain momentum before “Minnesota becomes Virginia,” they say.

Going into the 2020 legislative session

It is likely the DFL-majority in the Minnesota House will propose new restrictive laws such as expanding background checks for gun purchases and “red flag” laws that allow courts to temporarily remove guns from people found to be a risk to themselves or to others.

Josh Bretzman presented the possible resolution at a recent town hall in Onamia, hoping Sen. Andrew Mathews (R-Dist. 15) and Rep. Sondra Erickson (R-Dist. 15A) would lend them an ear.

They did lend an ear as they had done in January with Sherburne County residents looking for action on the issue. A letter was drafted by both legislators and submitted to the Mille Lacs County Board of Commissioners asking them to consider a resolution to create a Second Amendment Sanctuary County here in Mille Lacs. A similar letter was submitted to Kanabec County commissioners with the additional signatures of Sen. Jason Rarick (R-Dist. 11) and Rep. Nathan Nelson (R-Dist. 11B).

Anti-Second Amendment legislation has been making headlines across the nation. With this national backdrop, we respectfully urge the Mille Lacs County Board of Commissioners to consider adopting language that would make the county a Second Amendment sanctuary county.

Nearly 400 counties across the United States have adopted laws or resolutions to prohibit or impede the enforcement of certain gun control measures that would violate the Second Amendment, including universal background checks and bans on modern sporting rifles. In addition to counties, several states have also taken steps to protect the Second Amendment rights of their citizens.

As legislators, we are committed to working hard to protect and fortify the Second Amendment at the state level. In the meantime, we encourage you, Mille Lacs’ leaders, to provide leadership at the county level by upholding the Second Amendment rights our shared constituents enjoy thanks to our cherished Constitution.

Your response to our request to make Mille Lacs County a Second Amendment sanctuary is eagerly anticipated. Please let us know if we can assist in any way, including providing draft language that can serve as a model for local implementation.”

Rep. Erickson said that the Republican minority in the House will not support any form of gun restriction, and the Republican-held majority in the Senate previously blocked such bills, so it is unlikely that such a resolution will be needed locally.

Many state that the effort to declare counties a Second Amendment Sanctuary is largely symbolic on the sheriff’s part. However, this is a gray area.

The office of the sheriff is not mentioned in the U.S. Constitution and is an elected one rather than appointed which creates a great deal of autonomy. Many claim that local gun control hinges upon sheriffs’ interpretations of the Second Amendment. A number of sheriffs say that laws are not “one size fits all” and that they have the responsibility to push against what they see as the federal or state governments’ encroachment on their citizens’ lives and rights and that it is their duty to defend the Constitution.

Noted in a recent NPR article, Mirya Holman, an associate professor of political science at Tulane University who has studied the attitudes of hundreds of sheriffs around the country, says that elected sheriffs have extraordinary freedom to pick and choose which laws to enforce.

“They have an enormous amount of autonomy,” says Holman. “I’m not sure that there is another office that is a common office that has anywhere like the level of autonomy that sheriffs have.”

Other experts point to a 1997 Supreme Court decision, Printz v. United States, in which the court held that the federal government couldn’t compel sheriffs to provide background checks under the Brady Handgun Violence Prevention Act.

Those who ideologically oppose the concept of a sheriff’s autonomy say that the issue will eventually be decided in court if a sheriff doesn’t uphold the law and an act of violence occurs as a result.

When asked about a possible Second Amendment Sanctuary county resolution, Mille Lacs County Sheriff Don Lorge said he gets a lot of surveys about gun issues. “I don’t respond to them as groups use responses [from sheriffs] for political gain; however, I am very pro-gun,” said Lorge.

Lorge said that he gave an oath to uphold the laws in place. “I think it’s ridiculous to fight against the laws, and at the same time, I don’t think they’ll take our guns away,” he said.

However, Lorge added that he would never be anyone to “knock on doors and take anyone’s guns away from them.”

“I have no qualms saying I’m pro-gun. I will never give up my gun; it’s my Second Amendment right,” Lorge added. “If death is the reasoning they’re (anti-gun groups) give for getting rid of something, they’ll have to start with motor vehicles as they are responsible for more deaths than gun violence.”

The Mille Lacs County for 2A Sanctuary created a Facebook page in late January of this year. They ask residents to call their county commissioners with feedback on a possible resolution.

“It’s a way of life and history,” Bretzman notes of the individuals involved in the movement. “We start small shooting BB guns at pop cans, learn how to use a rifle deer hunting, shotguns with waterfowl, and sport shooting to see how far or how many clay pigeons we can shoot. Some even go on to the military with a strong sense of protecting and preserving the constitution.”

“This movement is equal opportunity,” adds Thorsbakken. “The Second Amendment was made for all Americans regardless of race, religion, sexual preference, employment, or income.”