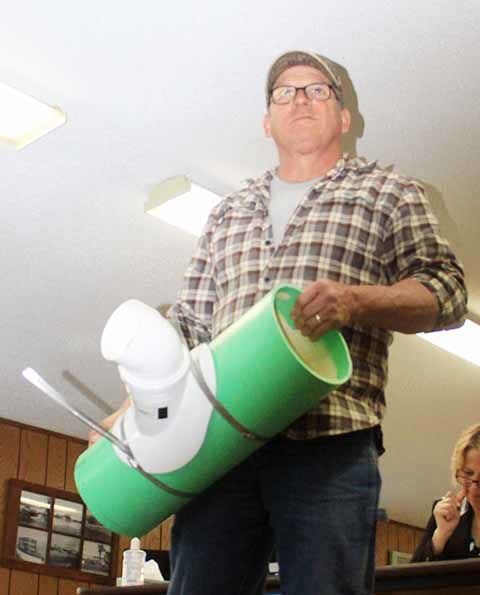 The May meeting of the Wahkon City Council was advertised as “open to the public with social distancing precautions” in place due to the COVID-19 stay-at-home-order from Minnesota’s Governor. The four council members in the hall on May 1l, including the mayor, along with the city clerk and city maintenance head, were strategically seated throughout the room with ample distance between them. As an added precaution, audience members were asked to sign in, and they practiced social distancing.

Among the major issues tackled at the meeting were the annual summer town festivals, along with discussion on local hazardous waste collection, the handling of vegetative yard waste, street blacktopping, and deferred sewer connection assessment.

The Council decided to follow the lead of most cities in the area with regard to holding their summer festivals, specifically the traditional Fourth of July fireworks display in downtown Wahkon and the annual August Wahkon Days celebration. After some discussion, the Council unanimously decided to postpone both activities for this season due to the coronavirus pandemic. “I just don’t know how we could do it,” said councilor Tony Button, talking about the fireworks on the Fourth of July.

The Council had some discussion on how to handle vegetative yard waste disposal such as brush, leaves and branches. The panel cited how this was handled in neighboring towns and tabled the issue until more data was available.

There was concern from a local couple about their being assessed a delinquent sewer hookup bill from previous owners of property they had recently bought. The Council decided to forgo the delinquent payment, allowing the new owners a new slate from which to start.

The Council checked their current $60,000 budget allotment for street and path repair and compared those dollars to the bids from local blacktopping companies. The panel decided to cull the proposed jobs and up the ante to $100,000 for future street repairs.

A feature of this year’s annual “Sally Doran Memorial Wahkon Clean-up Day,” i.e., a proposed $30 charge for items brought for disposal, was discussed. The Council decided to forgo the $30 charge and offer the service for free this year. Property owners within Wahkon City limits may bring items to be discarded to the City Hall parking lot from 8 to 11 a.m. on Saturday, June 6. A list of acceptable and unacceptable items is available in the City Hall Office.

The Council approved, with the backing of Chris Weinreich, the hiring of Gary Kleen as a seasonal maintenance person.

In other action, the Council heard testimony from area veteran’s representative Tony Button, who informed the panel that the scheduled May 23, “100th Anniversary Re-Dedication Ceremony” of Wahkon’s Veterans Park would be canceled for this year because of the pandemic issue and possibly rescheduled for next spring.

The meeting closed with a presentation from Weinreich showing the Council what he believed to be the best apparatus to deal with city sewer line connections in the future.