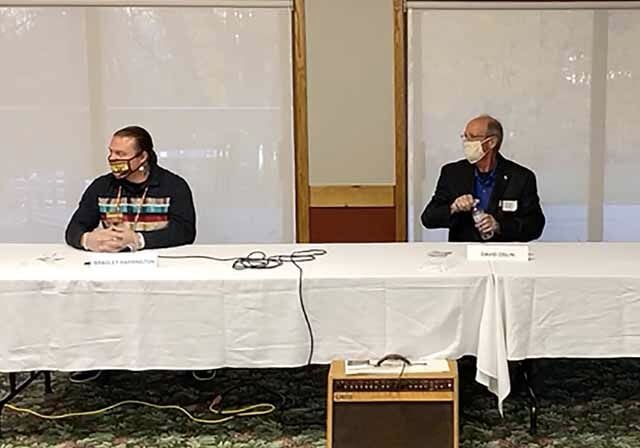 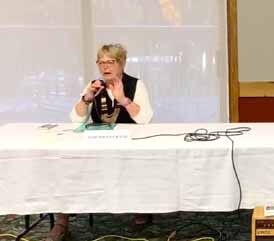 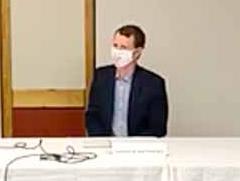 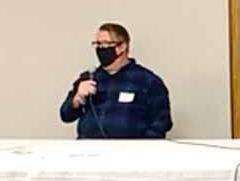 Some local candidates for various seats in the Nov. 3 general election gathered on Monday evening, Oct. 12, at McQuoid’s Inn in Isle for a candidate forum.

Tailored to each seat sought, questions were asked ranging from budgeting and COVID-19 impact to thoughts on the cooperative fishing agreement and candidates’ interpretation of the reservation status relating to the 1855 Mille Lacs Band of Ojibwe 1855 Treaty.

response, saying that while she has been in office, the legislature solved the last shortfall without raising taxes but were able to shift payments in education, a response she felt worked well.

Erickson stated that the legislature originally agreed to a six week shutdown in response to COVID-19 to help better equip hospitals and slow the spread but disagreed with the continued executive order by the Governor, adding that she feels individuals and businesses are capable of protecting themselves. “If Menards can be open, why can’t a small business in Isle, Wahkon or Onamia be open?” noted Erickson.

State representative candidate Cal Schmock gave no reason for not attending the forum but stated prior to the event that he would make a “serious effort to attend.” Schmock was present, however, at Isle Muni and Ogilvie Tower Bar meet and greets the day prior and invited the forum moderators to attend those events.

Candidates for county commissioner (Dist. 5) were up next. Candidate Bradley Harrington spoke on experience gained through serving in his current role as DNR tribal liaison and former role as the Mille Lacs Band of Ojibwe DNR commissioner. “I would like to see us come together and work through differences to have a more prosperous community,” said Harrington.

Incumbent Mille Lacs County Commissioner (Dist. 5) Dave Oslin spoke on his experience serving in the commissioner role and his experience working on wastewater treatment plant projects. “I would like to see businesses thrive; COVID has put us all in disarray,” said Oslin.

Notable among Harrington’s comments was his desire to see the county board set a different tone for its residents. “They set the tone in how we all live together,” said Harrington. “I would like to change that and work across the lines for a better future.” He added when asked his opinion on the Reservation status that he feels it was never abolished.

Oslin said that he feels the 1855 Treat Reservation had been disestablished. “We are in the middle of a major federal lawsuit, and a big part of it is the boundaries,” said Oslin. “A court will decide this, and I am excited about that because it has torn at the fabric of our community.”

A number of questions were posed to councilman Don Dahlen, whose credentials include being a medical doctor and CEO with management experience and involvement with the Isle Airport Association as a pilot and member. Dahlen spoke on his desire to be proactive in leadership rather than reactive, especially in the way of city finances. When asked how the City can increase revenue, Dahlen responded that raising taxes is not popular but that there were a number of years that the City did not raise taxes, which he felt put them in the position “to not do what we needed to do.” He added that revenue coming from other sources rather than the Isle Muni “has not panned out.”

Dahlen said, as for his long term goals, that he is looking forward to extending city water and sewer to the industrial park in hopes of encouraging community growth. “Once that’s done, it will be helpful,” said Dahlen. “The downtown area needs to get empty store fronts filled up and become more busy in the summertime … with a need for family-type things that can be done after hours.”

The Isle City Council race, in which there are two open seats, was addressed next, and all three candidates, Shannon Brown, Naomi Creech, Dave Keding, were present to answer questions ranging from how to lower property tax rates in the City to managing the liquor store and Muni to promoting economic growth in the way of local business and retention.

Council candidate Shannon Brown, who currently works for the DNR at Mille Lacs Kathio State Park and who has a background in accounting, bookkeeping and human resources, said that to keep taxes down, the council has to do better planning with the focus on the industrial park, and they need to work with the county assessor’s office to address increased property taxes within the City.

On economic expansion, Brown said, “We have a community that has been crippled by a fish. We have opportunities that we can expand on, not to give up, the fight on the walleye.” She proposed ideas such as the expansion of biking trails and creating more hunting opportunities. She added, on creating economic development for the area, that the Council should focus on expanding recreational activities and addressing the housing shortage.

Naomi Creech, council candidate and local business owner with experience in managing a construction clean-up company, proposed looking at cuts and wiser spending, especially in the way of the water bond. She felt that focusing on the long term goals of having at least three new businesses in the area within the next five years and promoting grants available to businesses was important.

Creech believes that the Isle Muni can bring more revenue with a facelift and more family friendly events. She also said that the promotion of local businesses, as she does with her own business, will help with economic development. She proposed the idea of a local dog park for vacationers.

Council candidate Dave Keding, who is retired from law enforcement and a veteran, stated that he would look at refinancing the water bill bond at a lower rate and would like to see grants secured to get the water and sewer project completed.

Keding said he felt that the liquor store and muni has been mismanaged for the last few years and feels the facility may not recover, adding the possibility of a wedding hall for future use. He said that to increase economic development, the industrial park would help, along with efforts to retain residents and to create more quality ATV trails.

The State Senate contest was last on the evening’s agenda with candidates Brent Krist (D) and Sen. Andrew Mathews (R-incumbent) both present. The candidates were asked questions ranging from thoughts on the Governor’s executive orders related to COVID-19 and a projected budget deficit to their interpretation of the reservation status of the 1855 Mille Lacs Band of Ojibwe Treaty and police relations.

Democratic state senate candidate Brent Krist, who has a background in computer networking and telecommunications, working on a railroad and in farming, believes that the Governor has had a lot of difficulty and not “much help from the other side.”

“I see this piece of cloth I’m wearing as the way to keep businesses open,” said Krist. He added that he is hopeful that COVID-19 is short lived and that a vaccine will be developed soon. He would also like to see less restrictions on cannabis to help generate revenue to help alleviate the State’s projected $5 billion deficit.

As for the reservation boundary issue, Krist felt non-Band members need to work together with the Band and “become good neighbors,” adding that they are the largest property tax payer and employer in the County.

On the relationship between law enforcement and the community, Krist said that rioting and violence are not protests. “I don’t pretend to understand all points of view, being a white male, but would listen to all perspectives and work on the issue,” said Krist. He added that he is a proponent of the Second Amendment.

Mathews, who has a background in farming and ministry and has served for the last four years as the area’s state senator, said he felt the initial response by the Governor and legislature was good to address passing funding and addressing hospital needs, but that it has now “gone overboard and is unconstitutional.”

“We know how to take care of ourselves safely, and it’s time to restore our constitutional form of government,” said Mathews.

Mathews said that the state budget will be a challenge next year with predictions of a $5 billion deficit or greater. He said the State will have to tighten its belts at all levels, just as a family does when there is a hardship.

On the reservation boundary issue, Mathews said that it is largely out of the hands of the people or legislators now as the issue is in the courts. “The goal is how to get both sides to work together … because I do represent both sides. It is a complicated issues, but I’ll keep doing what I can to make the community good for all residents,” said Mathews.

On the relationship between local law enforcement and the community, Mathews said, “From what I have seen, it is good.” He added that he will champion for what’s right for the local community as decisions are being made at the State level.