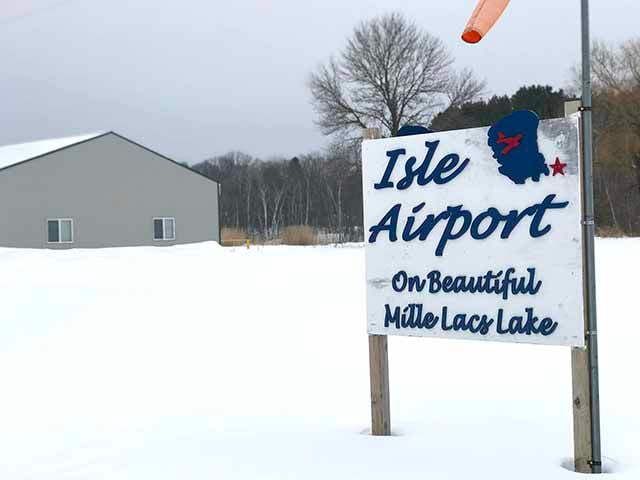 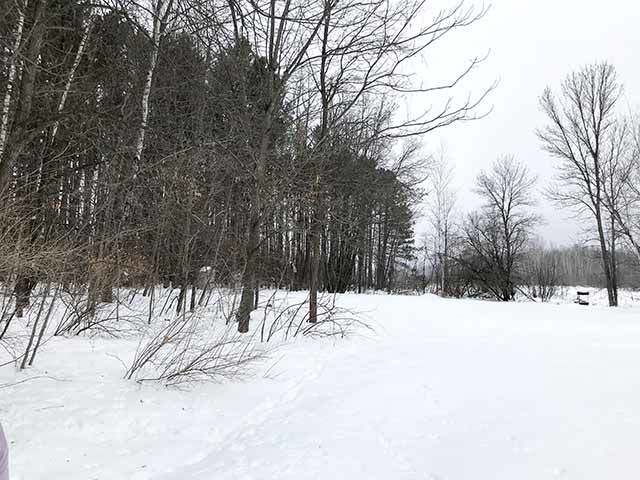 Pictured above is part of the stand of trees, as seen from an adjacent property owner’s yard to the south of the airport. The trees are in the air easement, but the City of Isle has yet to enforce the easement which may result in the airport shutting down. 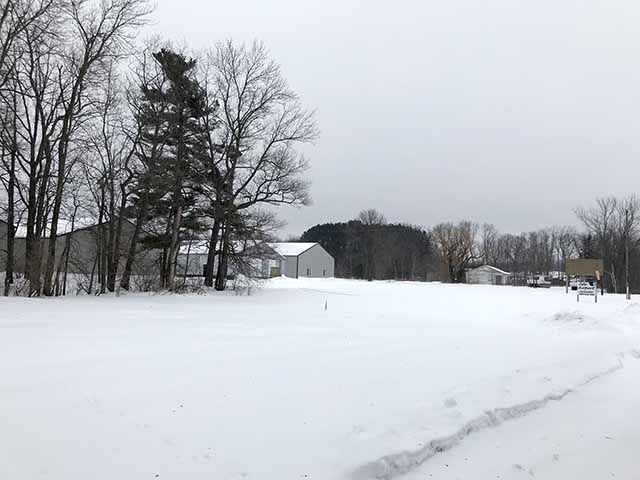 Pictured above is part of the stand of trees, as seen from an adjacent property owner’s yard to the south of the airport. The trees are in the air easement, but the City of Isle has yet to enforce the easement which may result in the airport shutting down.

The Isle Airport is in jeopardy of being shut down by the Minnesota Department of Transportation’s aeronautics office should the City of Isle choose not to enforce the air easement.

There has been an ongoing debate for a number of years over a stand of pine and other trees to the south of the Isle Airport on private properties that officials say have grown up into the air easement. The airport is privately run by the Isle Airport Association on city-owned land. The city is authorized to enforce the air easement but has chosen not to out of concerns of increasing the tax burden on Isle residents. A number of individuals are now rallying to keep the airport open.

The airport could become a public-use airport if the air easement was enforced. This, according to Isle Airport Association Secretary Patrick Moenkhaus, would enable anyone to fly into the airport (only members and invited guests are allowed now) and could expand economic opportunities, he said.

“The state now says the trees have grown so tall that if they are allowed to remain they won’t give us a license,” said Moenkhaus.

When asked about the city’s involvement in enforcing the air easement, Moenkhaus responded, “We’re trying to get them to do that, but they’ve been dragging their feet. The city attorney determined that if the city doesn’t enforce the easement and there is another accident, the city will be responsible for liability.” He added the airport association originally tried to work with the property owners. He said that the association paid $4,000 for a survey done the summer of 2019. The survey was necessary to determine accurate boundaries, ground elevations and tree top elevations.

Isle Council Member Don Dahlen said the airport association has been working on the airport for a number of years to meet the specifications that the state has for public airports and that the trees are the main stumbling block at this time. “The state has offered to pay for 90 percent of the removal of the trees, and the association has offered to pick up the remainder of the costs,” said Dahlen.

Moenkhaus said that the state is giving them until the April city council meeting to decide whether to clear the air easement. Some have attributed a 2013 plane crash to the height of the pine trees.

A plane crash occurred at the Isle Airport on July 18, 2003, in which the pilot of the plane was killed and three passengers sustained minor injuries.

The official report performed by the National Transportation Safety Board attributed the main cause of the crash to “the pilot’s failure to maintain adequate airspeed which resulted in a stall.” But additional factors listed were “trees, high density altitude and the soft field.”

The airport information section of the report stated: “obstructions listed for ‘runway 16’ were 25-foot trees 50 feet from the runway and 130 feet left of the runway centerline with a 2:1 slope to clear the obstructions.” A toxicology report of the pilot revealed a number of substances found in the blood and urine of the pilot including ephedrine (found in blood), pseudoephedrine (found in blood) and morphine (found in urine), with no opiates detected in blood. The report noted that morphine may be produced by the metabolism of other narcotic pain relievers including codeine, other painkillers and certain cough suppressants available over the counter.

Is a public airport viable?

“There are so many details to the history of this airport and so many things that must be considered,” said City Clerk/Treasurer Jamie Hubbell. “It is not ‘just a couple of trees’ like people are saying.”

However, Hubbell has said that the air easement issue has created costs including legal, engineering, administration and job costs that have been paid by both the city and airport association. Those costs have not been specified.

The city received quotes for removing all of the timber determined to be in the air easement ranging from $25,000 to $60,000. It is not clear yet who would be responsible for that amount should the air easement be cleared, but the airport association, according to Moenkhaus, says the bids are within what the association and MnDOT will cover.

Until 2015, there was no rent/lease agreement financially with the airport association, so any expense came from the city’s general budget. But if the airport becomes a public designation, that will all change, says Hubbell.

However, if the airport were to become public, the city would be eligible to apply for grants, but Hubbell said that amount could vary from year to year. She added that there may be some cost involved in bringing conditions of the airport up to a public status as well, with the clearing of the air easement likely being the most costly of them.

The Hill City Airport, which is also a similar airport with a grass strip runway, budgets $8,600 per year for their public airport. Of that total amount, $4,618 is covered by a grant, and the city receives $332 from hangar lease revenue. No revenue is created by fundraisers or donations.

The Isle Airport Association has stated that they would be responsible for airport costs should the airport become public, confirmed by both Dave Retka and Patrick Moenkhaus of the airport association.

An airport must be part of the National Plan of Integrated Airport Systems (NPIAS) to receive state and federal grants. Grants covering 75 percent of maintenance and operation costs are available. A number of airports, including airports such as Mora, Milaca, McGregor and Aitkin, take advantage of the grant opportunity.

“The Isle Airport Association (IAA) now pays 100 percent of these costs with volunteers, flight breakfast and donations,” said Moenkhaus. “If IAA can pay 100 percent, we can certainly pay 25 percent. We told the city at a meeting to put it into the lease.”

“The Mille Lacs area is really served by that airport. We would be willing to continue with business as it’s been and pay for everything and pay the city on top of that,” said Moenkhaus. “The fact of it going public doesn’t mean that there will be any additional burden on the city. We could cover expenses and have offered to do that.”

He added, however, that enforcing the air easement doesn’t mean that the airport has to become public. “But without the trees cut down, we will have to close,” he said.

The airport stays viable from member dues, fundraisers such as the annual pancake breakfast, hangar lease payments and the city’s contribution in insurance premiums. The city’s lease to the association is up in 2021.

One of the property owners who has over 50 percent of the tall pine trees located in the air easement on her property, Nancy Rizer-Schmidt, says she is not the only one with trees in the air easement but has been unfairly targeted. “How sad it is that they’re just focusing on me and my trees. There is another adjacent [property] owner,” said Rizer-Schmidt.

Rizer-Schmidt said she has good reasoning for wanting her trees to remain intact, citing loss of property value and the trees being a wind buffer, noise buffer and wildlife sanctuary.

Rizer-Schmidt noted the negative feedback she has received. “My hands are shaking, and my stomach feels terrible. I am not a bad person, and I’ve worked in the public for years. My family is from here, and my grandparents are from here,” said Rizer-Schmidt.

She said in a perfect world, the airport would stay the way it is. “I don’t wish them any harm, but I would have to honor what the Minnesota Department of [Transportation] Aeronautics states. They’re the experts,” said Rizer-Schmidt.

The Isle Airport Association and MnDOT office of aeronautics will be presenting an economic impact study and be available to discuss the pros and cons of private versus public airports at the city council’s regular meeting on April 14 at 6 p.m. Hubbell stated that the decision to enforce the air easement has been left up to the city, and the FAA and MDA will close the airport immediately for all private air traffic if not enforced.

“The council knows that there are pros and cons to their decision, and that is why they do not want to take it lightly and without considering all of the factors,” said Hubbell. “The council was diligent in their task of balancing their department budgets, made huge cuts again this year and we still had a tax increase. The taxpayers of Isle and Mille Lacs County cannot afford any additional increases in their taxes. Unless there is a 100 percent guarantee that this airport will generate economic boost for this community, it will be hard to not have any effect on the taxpayers if it were to become public.”

Council member Dahlen stated, “If I had my way, it (enforcing the air easement) should have been done since it was put in place in the 1950s. The facility is a nice facility, and really the only airport that’s on the lake. I think it could be a great asset for the city. If it becomes public, we can get state funds, but it hasn’t been brought to a vote yet. We’re at a point where the council has to make a decision: either support the airport and do what needs to be done or the airport will be closed because the state will not allow the airport to exist.”

Mayor Rodney Schultz did not respond to Messenger questions or calls.

More information about MnDOT’s airport grant program can be found at www.dot.state.mn.us/aero/airportdevelopment/fundingandgrants.html.