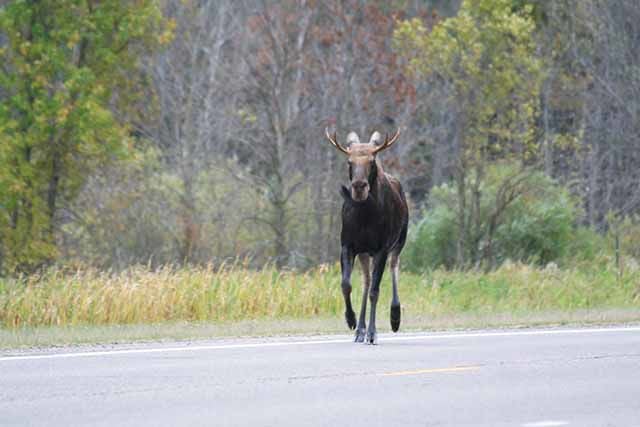 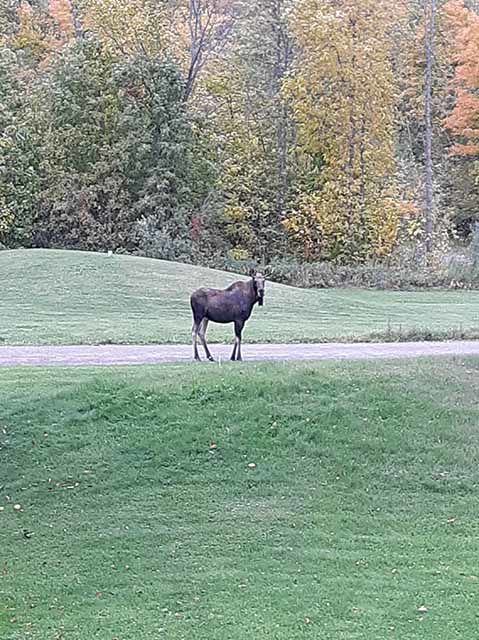 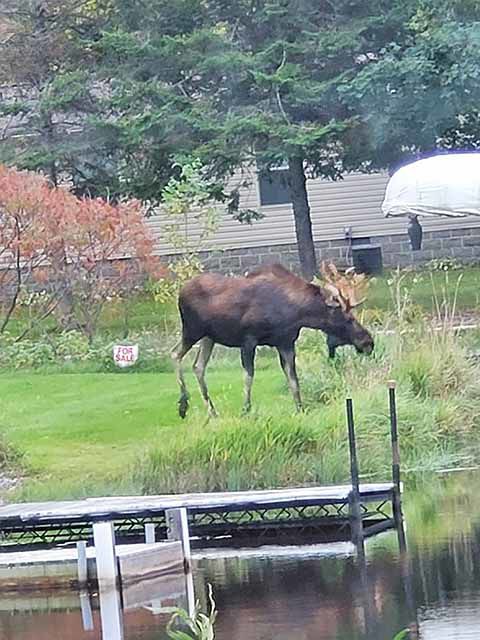 A very mobile moose has likely been either looking for love or habitat outside of its normal domain in the Isle area, according to DNR Area Wildlife Supervisor Steve Piepgras. The moose has been spotted north of Isle running through backyards, along the lake and trotting down the road last week.

“The most likely explanation is that it is a young male moose with wanderlust,” said Piepgras. “When we see them down this way, they’re typically juvenile moose looking to get back to their own home range. He is certainly south of his traditional range of the arrowhead region. He probably just started wandering and hasn’t found a suitable habitat yet.”

A second possible explanation for the wandering moose, said Peipgras, is that moose are susceptible to brain worm transmitted from whitetail deer. The worm, he explained, works its way into the brain and creates holes, making the moose lose their ability to detect their location and causing them to wander in tight circles and lose their fear of humans. Peipgras doesn’t believe that is the case with this moose, however.

“My guess would be, having not observed the moose personally but based on reports, that it’s just one of the young males looking for a place to live and exploring the area,” said Peipras. “If he had the brain worm he would be walking in tight circles, whether on the highway or near people, and have no regard for traffic or humans.”

Peipgras recommends not approaching the moose and said as a whole, moose are not aggressive species but will attack if they feel threatened.

“They can attack with their hooves or horns. Try to stay within 50 to 60 yards from the moose, and if it does start to look nervous, back off and observe from a distance. Give him some room, and try to keep the stress down,” he added.

The moose population has been struggling in the last 20 years, said Piepgras, but has stabilized. “It (the population) is significantly lower than historical numbers. They used to have a decent population in northwest Minnesota, but those numbers have almost disappeared,” he said.

Piepgras said that this isn’t the first time the DNR has received a report of a stray moose, but the last reports have been a few years ago in Mora and Onamia. Others in the area report seeing them more often.

Moose tend to be solitary outside of breeding season and require a fair amount of forage and vegetation to survive on, said Peipgras. But several moose can be found sometimes in an area with good habitat. He added that moose in Minnesota don’t tend to have the big racks like the ones found in Alaska, being that they are a different subspecies here.

“It's certainly a very unique species and sighting down here, and if people see, they shouldn’t feel threatened by it,” added Piepgras. “People should give it some space but enjoy it while they can.”