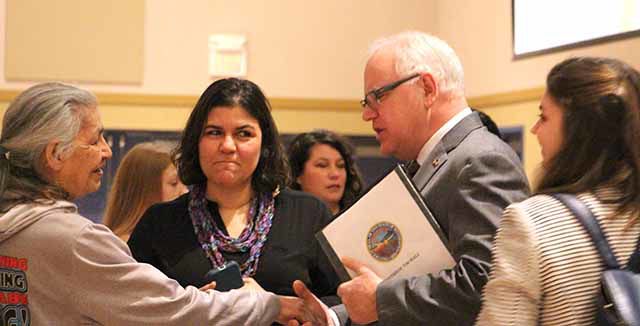 Gov. Tim Walz, pictured with attendees at the annual Mille Lacs Band of Ojibwe State of the Band Address in January of this year. 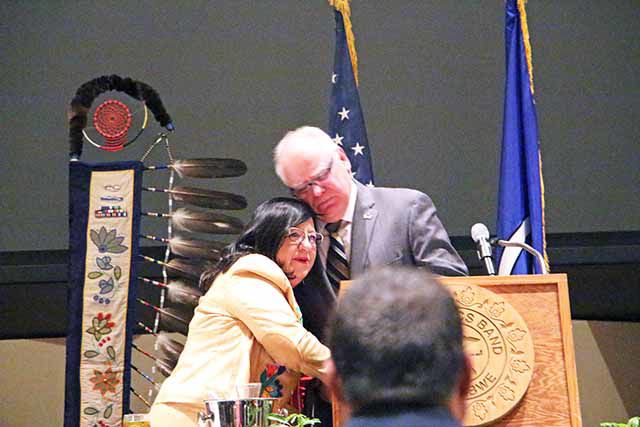 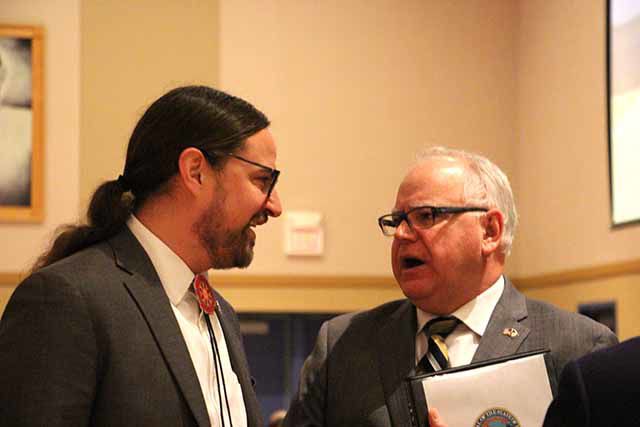 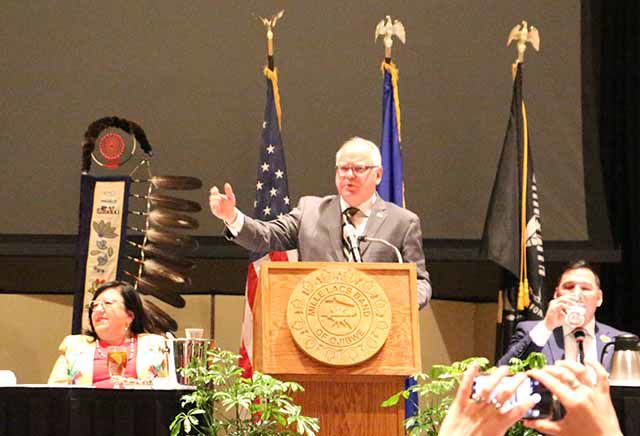 Gov. Walz speaks at the State of the Band Address. 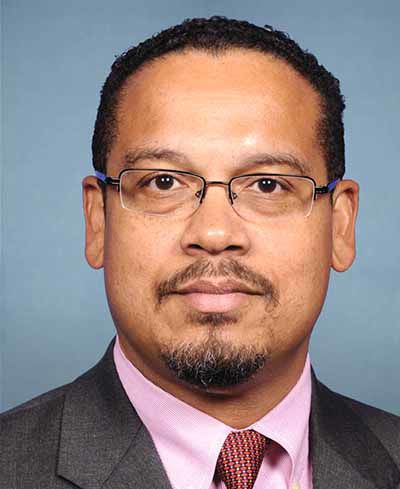 Gov. Tim Walz, pictured with attendees at the annual Mille Lacs Band of Ojibwe State of the Band Address in January of this year.

Gov. Walz speaks at the State of the Band Address.

Opinion may only hold so much water

With the backing of Minnesota Gov. Tim Walz, Minnesota Attorney General Keith Ellison filed court papers last Wednesday reversing the official, long-held opinion of the State of Minnesota on the Mille Lacs Band of Ojibwe Reservation boundaries to include the original 61,000 acres surrounding the lower half of Mille Lacs Lake.

This opinion is a reversal of previous Attorney Generals Lori Swanson and Mike Hatch and all the past governors of Minnesota.

All of this was done without the consultation of Mille Lacs County and to what some believe may be the possible detriment of its non-Band residents. The county made an effort to meet with the Governor, but their efforts were declined.

However, the future of Mille Lacs County and the boundaries of the Reservation will be in the hands of the district courts and perhaps the U.S. Supreme Court.

Gov. Walz and Attorney General Keith Ellison’s opinions in creating the reversal of the State’s opinion will not likely be a considering factor as the lawsuit by the Mille Lacs Band of Ojibwe against Mille Lacs County moves forward.

Some believe Gov. Walz and Attorney General Keith Ellison’s official opinion filing is an effort to isolate and pressure the county and that it is purely political in nature.

The attorney for the county regarding the federal lawsuit by the Mille Lacs Band, Randy Thompson, said that the opinion of Gov. Walz and Attorney General Keith Ellison will not be factored into the three-part analysis that the courts apply to assess whether Congress diminished or disestablished a reservation.

The first consideration of the three parts is the statutory language used to open the Indian lands. The second is the consideration of the historical context surrounding passage of the relevant treaties and laws, being careful “to distinguish between evidence of the contemporaneous understanding of the particular Act and matters occurring subsequent to the Act’s passage.” The third is an examination of who actually moved onto reservation lands that were opened to settlement.

The federal lawsuit by the Band is currently in Minnesota District Court presided over by Judge Susan Richard Nelson which could go to trial as soon as late 2020 or early 2021. Depending on the ruling, it could then be appealed to the 8th circuit court, and within a couple years, proceed to the U.S. Supreme Court.

At that point, it is hard to say how the Supreme Court would rule as reservation boundary issues have shown to be both partisan and non-partisan in the past.

The Mille Lacs Band has stated that the Band’s only interest in legally solidifying the 61,000-acre reservation boundary is to better work with county police as they combat the onslaught of crime on the Reservation. However, some question if this is so with the Band’s recent push toward increased sovereignty.

The county’s response to the Walz/Ellison opinion

“The county and many of our non-Band residents living in the three townships of Kathio, South Harbor and Isle Harbor are disappointed and confused by Attorney General Keith Ellison and Governor Tim Walz’s decision to reverse the long-standing and bipartisan positions of former governors and attorneys general on the status of the Mille Lacs Reservation.

This decision to reclassify the three townships was made without meeting with the county or its citizens to discuss the reasons for their decision or to understand the possible impacts of this change. The county has extensive experience and expertise regarding this issue that directly and persuasively refutes their position. It’s also worth noting that the county board in early October 2019 sent a written meeting request to the Governor, but no meeting with the Governor has occurred. Just last month, the Governor drove by Milaca on his way to the January 14, 2020 State of the Mille Lacs Band Address. Given these developments, the Governor’s lack of response must be seen as deliberate and dismissive of the interests of his citizens.

The county remains confident that the long-standing position, taken by the Band, the Federal Government and the State for over 100 years, that the 1855 Mille Lacs Reservation was disestablished will be the final decision by the federal courts. The decision by the Governor and the Attorney General does not change the legal status of the Reservation or negate the strength of our legal position. We are confident that it will not prevent a full and fair hearing of the issues before the federal courts.

The county urges all its citizens, residents and visitors–Band members and non-Band members–to continue to treat each other with respect and dignity and to “agree to disagree” on this issue even while focusing on the many, many things that bind us together as a community. We are confident that, whatever the outcome of the legal process in federal court, we will move forward as neighbors and friends.”

“It is surprising and disappointing that a filing from the Attorney General’s office would disregard more than 100 years of policy and precedence by Minnesota governors and attorneys general. It is inexplicable that the Attorney General’s office would take this step without talking to Mille Lacs County or the residents who would be directly affected by having their homes and other property reclassified as Indian country.

For more than 100 years, up to and including the administrations of Governors Carlson, Pawlenty and Dayton and the tenures of Attorneys General Hatch and Swanson, it has been a matter of settled public policy that the Mille Lacs Reservation was disestablished. Only in the last few decades has one party–the Mille Lacs Band–sought to re-open this debate and has done so with a well-funded, coordinated campaign of public relations, litigation and political influence.

This change in direction–if it in fact reflects an actual change in the State’s position–sends a chilling message to every local elected and appointed official that the State may not have our backs if local governments are defending themselves and the rights of Minnesota citizens against politically well-connected interests.”

The Mille Lacs Band’s response to the Walz/Ellison opinion

“Yesterday, February 19, 2020, will go down in history. We learned late today that the official position of the State of Minnesota is that the Mille Lacs Reservation exists and was never diminished or disestablished. The State is in agreement that the original boundaries negotiated by our Tribal Leaders in 1855 are fully intact and always have been. We welcome this acknowledgement by the State of Minnesota of what has long been the position of the two parties to the Treaty–the United States of America and the Mille Lacs Band of Ojibwe. This acknowledgement came in a separate legal action between the county and the State that did not involve the Band. Our federal lawsuit with the county over law enforcement will continue.

How did this come about? The Minnesota Attorney General filed this position in court in response to a lawsuit filed against the State by Mille Lacs County elected officials. The county officials claimed that the State must pay for their attorney fees in our law enforcement lawsuit with the county because they are supporting the State’s position that our boundaries no longer exist. The State disputed the county’s request, writing, ‘The County Attorney and County Sheriff are not acting on behalf of the State because the State’s position is that the Mille Lacs Indian Reservation has never been diminished or disestablished.’

With this court filing, it is now the position of the United States, the State of Minnesota and the Band that the 1855 Reservation still exists. Unfortunately, county officials are continuing their campaign of fear-mongering to support their position that the Reservation no longer exists. According to the Pioneer Press, ‘Mille Lacs County leaders have warned that a host of governmental functions, from business licenses to taxes to environmental regulations to perhaps southern-shore access to some of the lake’s prized walleye-fishing waters, could be subject to sweeping changes outside of their–or their residents’–control.’

None of this is true. We have no authority–and no intent–to impose business licenses or taxes on our non-Indian neighbors. EPA has exercised environmental jurisdiction on the reservation for many years without incident, and there is no reason to expect this to change. Access to and regulation of the Mille Lacs walleye fishery also will not change.

On February 22, 1855, the Band agreed to the terms of the Treaty. This Saturday will be the 165th anniversary of the Treaty. We owe a debt of gratitude and appreciation to every Tribal Leader who signed the Treaty and to our Tribal Leaders and Band Members who have fought for our homelands and to keep the boundary throughout history. While the State’s acknowledgement that our Reservation still exists changes nothing for our non-Indian neighbors and friends, it has great meaning for our people. It is a long overdue acknowledgement by the State that we always have been and always will be the Non-Removable Mille Lacs Band of Ojibwe! Miigwech.”

*Editor’s note: The Messenger did reach out to the Governor’s office with no response.