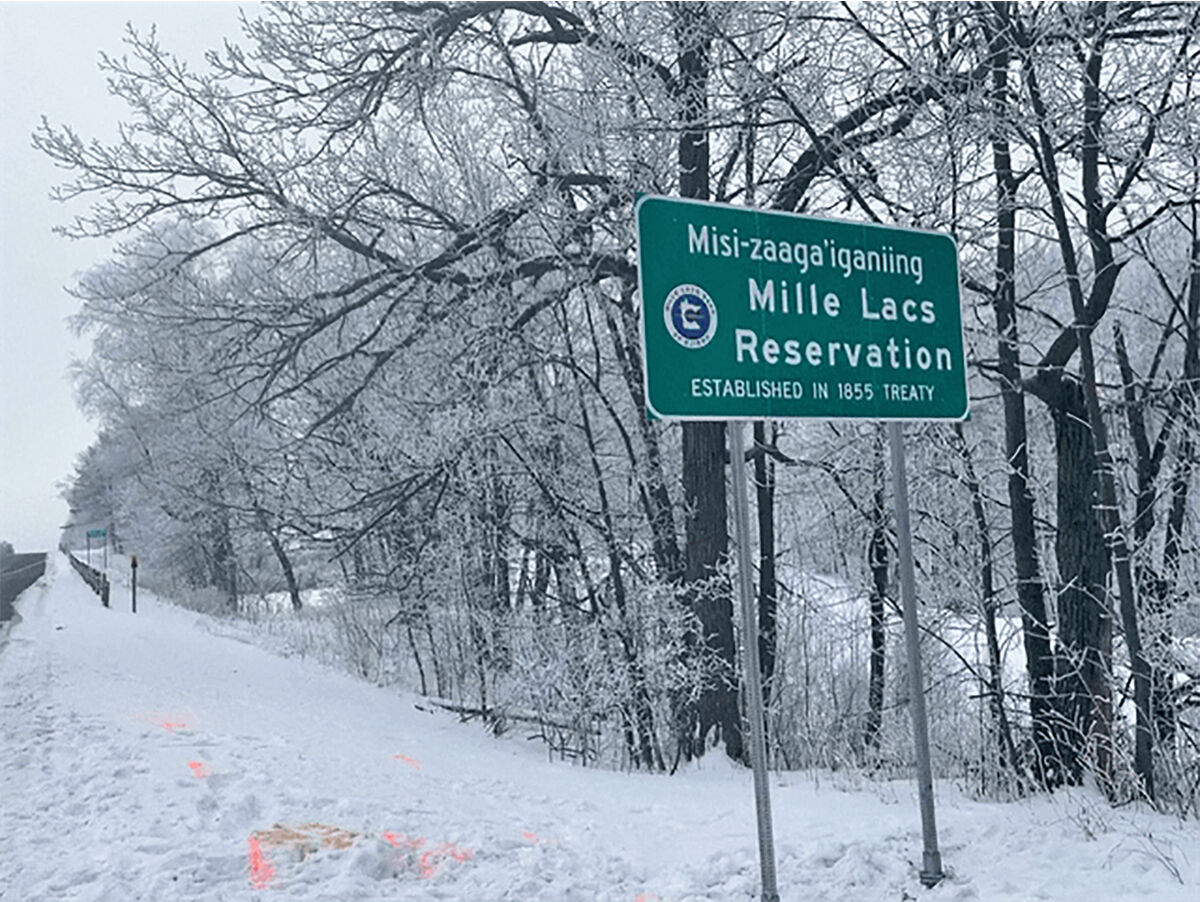 MnDOT erected Mille Lacs Band of Ojibwe Reservation boundary signs. A sign has been placed on Hwy. 169 at the southernmost border of Crow Wing County. 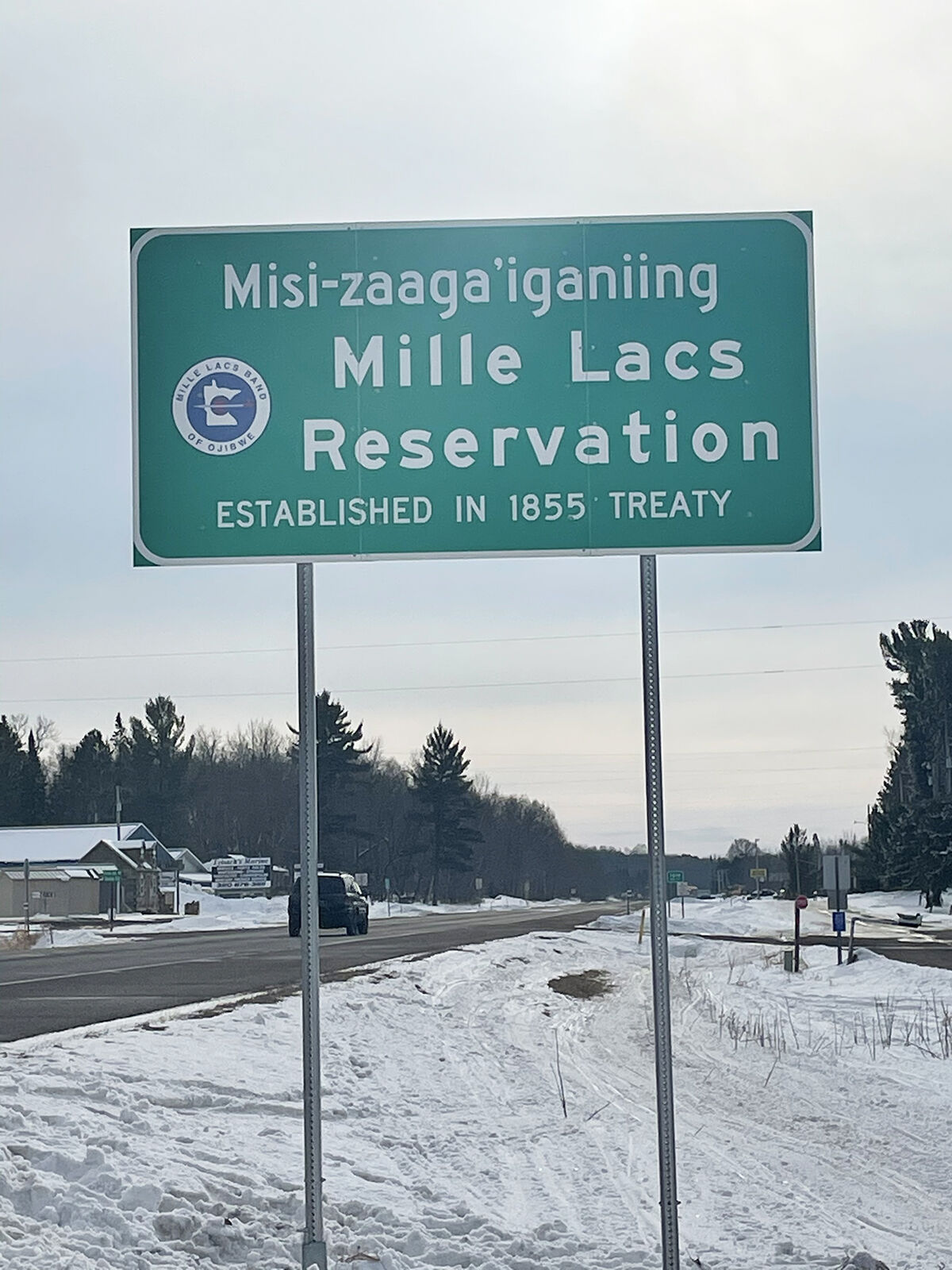 Another sign to mark the boundary has been placed on Hwy. 47 at the northern end of the Isle city limits.

MnDOT erected Mille Lacs Band of Ojibwe Reservation boundary signs. A sign has been placed on Hwy. 169 at the southernmost border of Crow Wing County.

Another sign to mark the boundary has been placed on Hwy. 47 at the northern end of the Isle city limits.

Before the courts have had a chance to rule on the Mille Lacs Band of Ojibwe Reservation boundary issue currently in litigation, and what many in the area would consider a brazen move and others would consider long overdue, the State of Minnesota on behalf of the Mille Lacs Band, erected signs on Jan. 7 marking what they believe are the Reservation boundaries.

As of press time, additional signs were going up in other locations along state highways within the original 61,000 acres of the 1855 Treaty Reservation.

In February of last year, Gov. Tim Walz reversed the official, long-held opinion of the State of Minnesota on the Mille Lacs Band of Ojibwe Reservation boundaries to include the original 61,000 acres surrounding the lower half of Mille Lacs Lake.

This opinion is a reversal of previous Attorney Generals Lori Swanson and Mike Hatch and all the past governors of Minnesota.

A Minnesota federal judge, U.S. District Judge Susan Richard Nelson, on Monday, Dec. 21, agreed to a motion by attorneys for the Mille Lacs Band of Ojibwe for a summary judgment on standing regarding a breakdown in the law enforcement agreement between tribal police and Mille Lacs County as part of the tribal police and Band’s 2017 lawsuit against the County.

Mille Lacs County holds the opinion that Article 1 of the 1864 Treaty ceded the 1855 Reservation to the United States.

The Mille Lacs Band of Ojibwe on their Facebook page issued the following statement on Jan. 8:

“Yesterday, the Minnesota Department of Transportation began placing signs on the borders of our Reservation. The signs read: Misi-zaaga’iganiing/Mille Lacs Reservation/Established in 1855 Treaty.

“These signs will not affect our pending lawsuit but are an important reminder of the establishment of our Reservation. Our ancestors withstood a decades-long campaign by powerful timber companies, non-Indian settlers, and federal, state and county officials to force them from the Reservation, which included acts of violence and the burning of the Band’s homes and villages. They remained here against all odds.

“Given our history, and the modern-day efforts of Mille Lacs County to erase all memory of our Reservation, we greatly appreciate the State’s public recognition of its establishment in 1855.”

“The Attorney General has clarified the State of Minnesota’s position on the reservation boundary for the Mille Lacs Band. MnDOT will continue to use this boundary, which is also consistent with the position of the federal government.”

Do you support or oppose Minnesota setting its own fuel efficiency standards for automobile manufacturers?