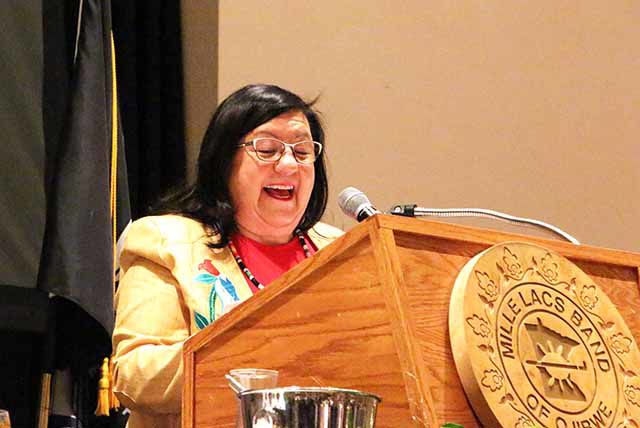 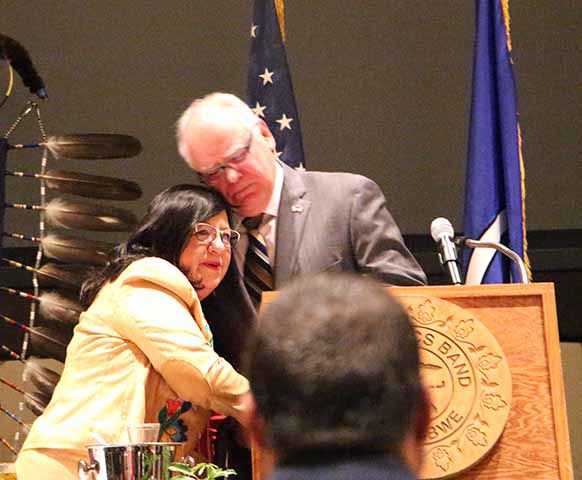 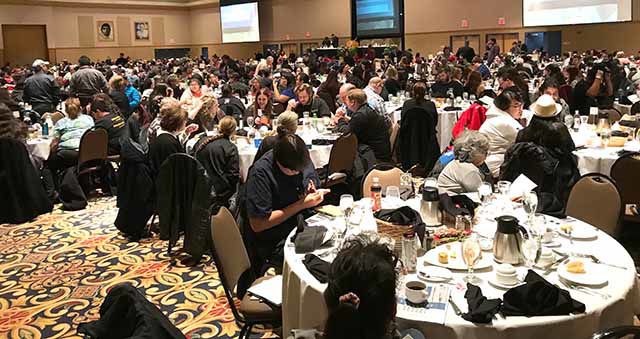 The Mille Lacs Band of Ojibwe’s State of the Band Address was held last week on Tuesday, Jan. 14 at the Grand Casino Mille Lacs. 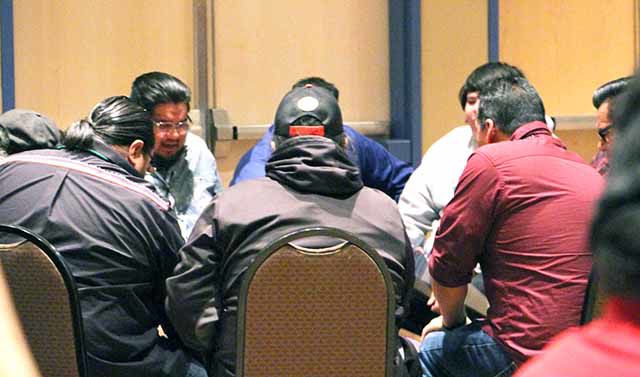 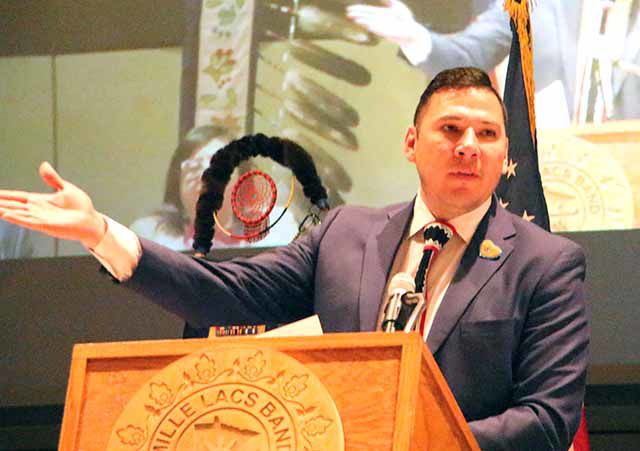 Commissioner of Corporate Affairs Joseph S. Nayquonabe in his role of master of ceremonies. 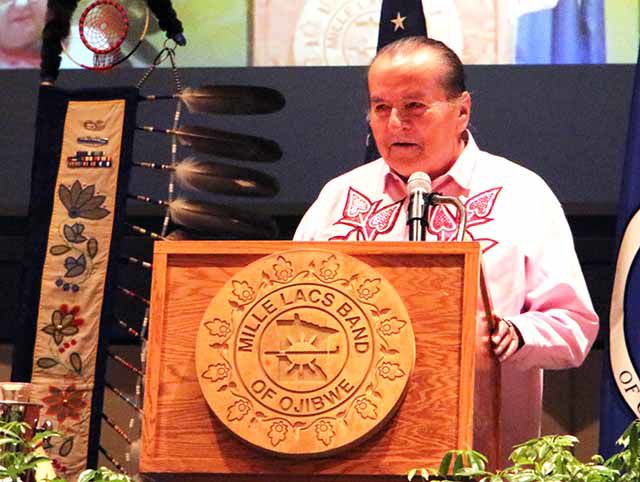 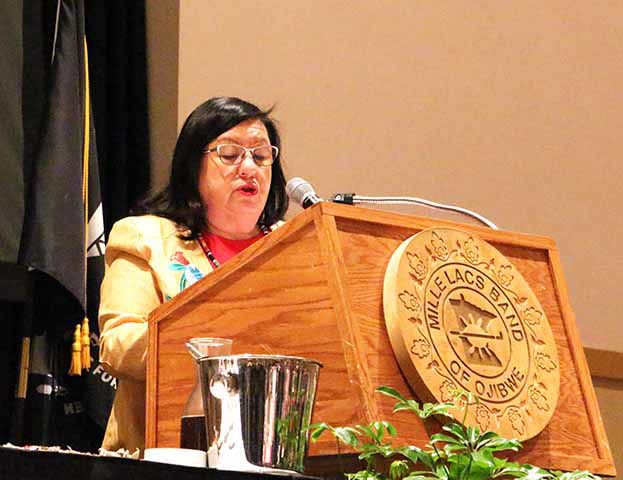 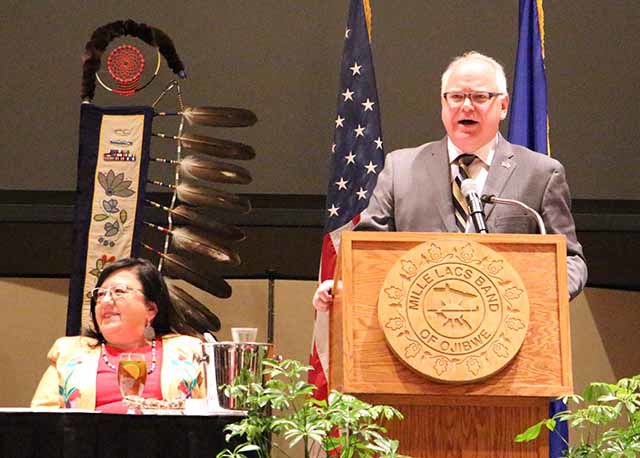 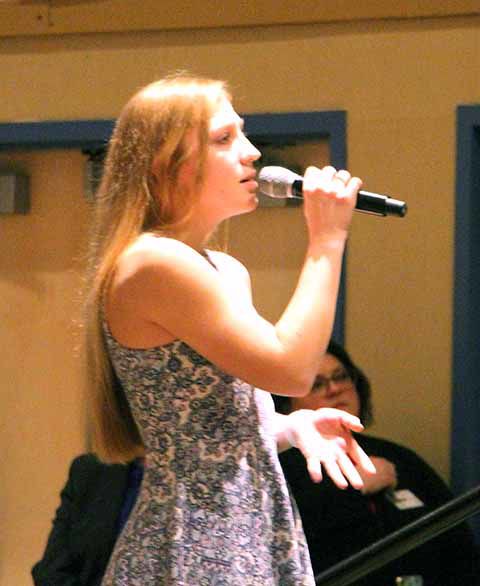 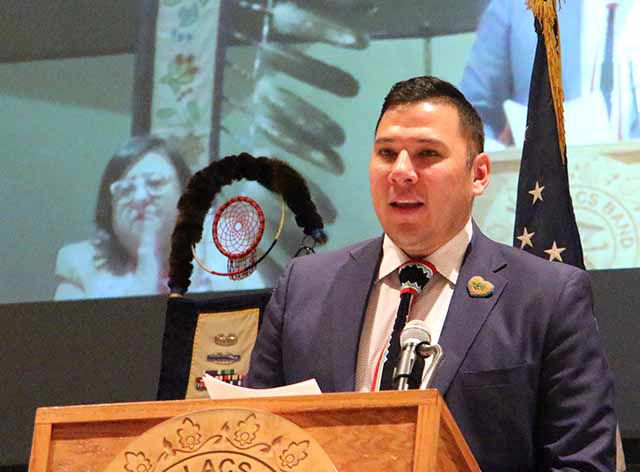 The Mille Lacs Band of Ojibwe’s State of the Band Address was held last week on Tuesday, Jan. 14 at the Grand Casino Mille Lacs.

Commissioner of Corporate Affairs Joseph S. Nayquonabe in his role of master of ceremonies.

The Mille Lacs Band of Ojibwe’s annual State of the Band Address was held at the Grand Casino Mille Lacs on Tuesday, Jan. 14. Chief Executive Melanie Benjamin delivered the address in front of a packed ballroom of approximately 1,200 Band members, guests, and a special guest of honor, Gov. Tim Walz.

Benjamin greeted the group of attendees with an “Aniin, Boozhoo.”

She referenced author Beatrice Taylor, stating, “Beatrice believed that life was about giving to others. She wrote, ‘All I want to see when I leave this earth is that my children and grandchildren have homes, a good education, and good things like everyone else, but that they are also knowledgeable about their Ojibwe language.’ It is what our ancestors prayed for. Mino Bimaadiziwin–the good life. They believed that creating a better future for generations they would never even meet was the most important thing.”

She added that their ancestors fought to preserve their language and culture and for decades, they risked being arrested and sent to prison just for attending a ceremonial dance. She also spoke of atrocities inflicted on her people such as “boarding schools kidnapping children,” and their homes being burned down in the early 1900s after their ancestors near Mille Lacs Lake refused to move to White Earth.

Benjamin said that as they enter the new decade, the Band needs to strive to be good ancestors for future generations which would include fighting the battles they must for “justice, our rights and protection of our homeland.” She added, “Long after those who battle us today are gone, we will still be here because we are the people who survived. We are the non-removable Mille Lacs Band of Ojibwe. We hear the drum, and with each loud beat, we know that we will not be moved, we will not be defeated, and we will never surrender our Reservation.”

Year of growth and progress

Last year was a year of growth for the Band, said Benjamin, with success in a number of ways including nearly 3 percent more revenue than the previous year, 250 Band members employed by the casinos, a record number of Band members in leadership positions, the building of the new clinic, the completion of a District 2 community center, the opening of the Meshkawad Community Center in District 3, the construction and renovation of elder homes, and $1 million given in scholarships to 265 of their students.

Relations with state and federal government

Benjamin outlined her duties, with the most time consuming duty being conducting external relations with other governments. She said this includes leading Band efforts to defend and protect tribal sovereignty, their right to healthcare, education, housing, and other programs. She added that her duties have included working with the state and federal government which means protecting and defending their homelands.

She noted the work done with state leaders to create the Missing and Murdered Indigenous Women’s Task Force in Minnesota. She also hailed Gov. Walz, stating that he signed a new order requiring state agencies to consult with tribes before doing anything that would impact them and now requiring all state leaders and employees to go through a two-day Tribal State Relations training on a reservation.

“Most important, Governor Walz has treated us as equals … he is the first Governor to ever attend a State of the Band Address on the Mille Lacs Reservation,” said Benjamin.

The Tribal Law and Order Act, she mentioned, allows their Solicitor General Caleb Dogeagle to prosecute federal crimes in federal court that are committed on the reservation. “This is a historic exercise of our tribal sovereignty,” said Benjamin.

On economic development, Benjamin noted the extension of the New Market’s tax credit that the Band pushed for which helped them finance Eddy’s Resort several years ago and the housing development in Hinckley. “We need tax credits to continue,” said Benjamin.

She added they pushed Congress to change federal tax laws for their young people. “We fought for new language that protects young Band members under 24 years of age from an unfair tax penalty when they use this trust fund,” she added.

Benjamin said on Nov. 25, she got a call from Attorney General Barr’s office urging her to meet at his office the next day in regards to missing and murdered Indian women. She took a plane to D.C. only to discover that the meeting would be in the Oval Office with President Trump, and he would be signing an Executive Order creating a federal Task Force on Missing and Murdered Indigenous Women.

She shared the story of the signing. “We were told to stand behind the President … and that the shortest person should stand right behind him. That happened to be me,” she quipped. When the President introduced Benjamin, he had a hard time pronouncing “Ojibwe,” she said.

“Behind him, I quietly said, ‘Ojibwe … it’s Ojibwe. When he suddenly turned around and said, ‘Would you like to say something? Could you say a few words? Come here, Melanie,” she recalled. Benjamin proceeded to address the crowd gathered for the signing.

On addiction and out of home placements

The biggest challenge the Band faces in health and human services, said Benjamin, is the high rate of children being placed outside the home by the courts. She said there is a shortage of social workers, and the Band plans to overhaul the system.

She also mentioned the Band foster families, expressing her appreciation for them in keeping children connected to their birth families and stating that maintaining some connection with birth parents helps to ensure they stay in their community, maintain an emotional connection and maintain the child’s culture.

Benjamin said that warming temperatures are changing everything. “Birds are returning sooner, and deer are breeding sooner, sometimes before they have enough to eat,” said Benjamin. “One hundred years ago, 90 percent of trees around Mille Lacs were maple. Today, only 30 percent are maple because they are moving north.” She said that climate change is causing flooding, which she said harms crops and increases the cost of food. “Of great concern is our Manoomin (wild rice), which is very sensitive to any change in water levels,” she added. “Something called ‘climate migration’ is already happening in America with more Americans choosing to relocate to higher, cooler lands with more water resources. It’s different for us. As Anishinabe, we have no place to migrate to. Our lives are here on our homelands in each district. Our burial sites cannot be moved. Our treaty rights to hunt, fish and gather are not portable. We need to prepare for the future. The good news is we have already begun.”

Part of their efforts has focused on the expansion of a local farm to produce fresh fruits and vegetables and the acquiring of a ranch in Morrison County.

Benjamin also referred to a soil crisis. “Experts predict that there may only be 60 years left of good soil for growing food,” she said. To prepare for this possibility, the Band implemented an aquaponics program.

Benjamin said that the Reservation became known as a “police-free zone” by criminals after the law enforcement agreement between tribal police and the sheriff’s department was terminated by the county in 2016.

She said because “promises were made and broken,” with no help in sight, they did the only thing left to do and filed a suit against Mille Lacs County in federal court. Benjamin added that with prayer and ceremony, and help from their trustee, they did manage to get through that period until the agreement was reinstated in 2018, however.

Benjamin said that the Band has behaved with honor but that the county has engaged in what she called a “public relations attack” by spreading false information in the newspaper, “trying to build fear and mistrust among our non-Indian neighbors.”

“To our friends and neighbors, I have this to say. There are 11 Indian reservations in the State of Minnesota, and thousands of non-Indian people who live within those reservation boundaries who have never experienced what Mille Lacs County wants you to believe will happen,” said Benjamin. “Federal law is very clear. If you live within our reservation and are not a Mille Lacs Band member, we cannot tax you. We cannot zone you. We cannot force you into our courts. If you are arrested, the case goes to the state or federal government. If you live within our boundary, you do not lose any rights you have as a county or state citizen.”

She added, “The fact is our reservation has existed since 1855, and we have never once attempted any of these things. The county is not telling you the truth. They are just trying to justify raising your taxes to pay the legal bill for their obsession with getting rid of our reservation. The Mille Lacs Band wants nothing more than to live in peace and be good neighbors. We have been good neighbors, and we will continue to do so, no matter what.”

Benjamin concluded with a charge to Band members, stating, “Together, we will finish the job our ancestors started. We will fulfill the promise to future generations we have yet to meet … that these lands will forever be our home. We are the non-removables, and together, we will face our battles and we will win. And when future generations look back on what we achieve together, they will say that we were good ancestors.”